EXPRESS INFORMER > News & Politics > SARAH VINE: One day it’s all pigtails and muddy knees, then suddenly your children are gone

Well, that’s it then. Job done, as they say. My eldest finished school for ever on Friday. Meanwhile, my youngest said goodbye to his friends from Year 11 in preparation for starting sixth-form in the autumn.

Quite why they’re chucking out the Year 11s for the summer already is a mystery to me. The nation’s 16-year-olds now have bog all to do for the next three months, apart from sit around playing computer games and making a nuisance of themselves.

There aren’t an awful lot of summer jobs around. And it seems like such a missed opportunity, given how far so many have fallen behind during the pandemic. But what do I know? I’m just a parent. I’m sure Education Secretary Gavin Williamson knows what he’s doing.

Either way, such a bittersweet moment, such a huge rite of passage. And an experience shared by countless families. By lunchtime on Friday, Year 11 was trending on Twitter as students and teachers took to the internet to share videos and pictures.

The Mayor of Greater Manchester, Andy Burnham, posted a picture of himself on his last ever school run. A friend rang me.

‘Have you seen Andy Burnham’s wife?’ she said. ‘She’s gorgeous!’ I laughed: ‘That’s his daughter, you idiot.’ Stunned silence. ‘Oh. But she looks so grown-up.’

The Mayor of Greater Manchester, Andy Burnham, posted a picture of himself on his last ever school run. A friend rang me

I know. Kids do that and it’s really most disconcerting. One minute they’re all pigtails and muddy knees, the next they’re using your razor in the shower, booking holidays to Portugal with their mates, and giving you heart attacks by going to parties with people you’ve never heard of in postcodes you never knew existed.

The house in the evenings is suddenly eerily quiet. No more endless requests for glasses of water, no more padding around in pyjamas sneaking biscuits. At last you can sit peacefully in front of the telly for hours on end.

Bliss, right? Ha. Be careful what you wish for. Children turn your world upside down when they come into it, and they turn it upside down again when they leave. Or start to leave. Or begin to show even the tiniest signs of leaving.

I’ve never thought of myself as one of THOSE mothers. The clingy, treasure-every-moment type. I’ve always been quite no-nonsense and unsentimental about my children. But for some reason last week really knocked me for six. 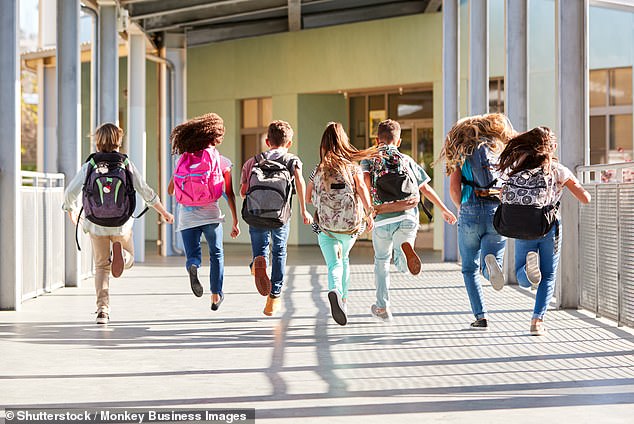 At least my daughter is still living in the same country as me, and if I ever get really worried I can always track her on social media (file image)

It’s not as though I didn’t know it was going to happen. After all, I did it myself to my own parents, and how. In fact, compared with what they had to put up with, I’m lucky.

Aged 18 I left them in Italy, where they lived, and went to live on my own in Brighton. God knows how my poor mother must have felt, especially since there were no mobile phones and internet then. I don’t think I even had a landline.

At least my daughter is still living in the same country as me, and if I ever get really worried I can always track her on social media.

Somehow, though, back then it felt different. Not so scary, not so momentous. But that’s because it wasn’t me doing the letting go. I didn’t have the fear of knowing what the adult world holds, what dangers might lie ahead.

Now the EU is funding torture

Some might think the best way to deal with Belarus dictator Alexander Lukashenko – who last week ordered the hijacking of a Ryanair plane to arrest two dissidents on it – would be to freeze him out.

Not Ursula von der Leyen, president of the European Commission. She favours a bribe – and has offered €3 billion (£2.57 billion) to Belarus if it ‘starts its peaceful democratic transition’.

Lukashenko is a murdering terrorist in the pay of Russia. Giving him money is tantamount to funding torture.

Brexit may not be perfect, but at least it means we don’t have to be party to that.

I don’t think any parent is really ever ready for that moment. Sure we joke that we can’t wait to get rid of them so we can turn their room into a yoga studio or extra bathroom; so that finally we can open the fridge and not find a half-eaten Jammie Dodger stuck in the yogurt pot.

But when it comes to the crunch, that’s not what we really want at all. What we want is what we don’t have: time. The chance to slow the clocks, perhaps freeze the moment, until we’re finally ready to let go. And maybe even the opportunity to do it all again, only without the mistakes. The chance to re-sit that great defining test of adulthood, being a parent, and to pass with flying colours.

Because the truth is, you never quite get it right. I don’t think any parent reaches their child’s 18th birthday without wishing they had done some things differently. And for those of us whose children have made that final journey into official adulthood against the background of the pandemic, there is perhaps even more cause for regret.

My daughter was 16 when this whole nightmare began. She is 18 now, and still lockdown hasn’t fully lifted. She had a term-and-a-half of lower-sixth before Covid closed the schools. She, like countless others, has spent the last 18 months living a surreal existence, cut off from friends and teachers, and pretty much having to study for A-levels alone.

She and others her age have missed out on what, under normal circumstances, are some of their most formative years. A time when you build your first romantic relationships, work out who you might be or want to be, to start to strike out on your own as a quasi-adult. This is when a young person’s world begins to open up, where you finally start to see beyond the parameters of your own upbringing, catch a glimpse of pastures new.

And yet, for those who said their final farewells to teachers and classmates on Friday, it’s all been so very different. Face masks and social distancing, long hours spent in solitude. No proms, no parties, no concerts, no memories. Or not many you would want to treasure.

For me too, it feels like it’s ending not with a bang but with a whimper. I wasn’t allowed to attend my daughter’s farewell church service, or the small tea party afterwards. She went alone, on the Tube as normal, just like any other day. Except it wasn’t. It was her last day of school ever, and I should have been there with her, just as I was on her first day. To mark the moment, to embarrass her in front of her friends, to annoy her by taking too many pictures.

And to savour, for a few final moments, the closing of another chapter in all our lives.

The inquest into the murder of Jack Merritt, 25, and Saskia Jones, 23, by London Bridge terrorist Usman Khan has returned a verdict of unlawful killing.

But it seems to me that a major factor in the deaths of these two young people was an excess of political correctness on behalf of the charities and agencies so desperate to believe their own agenda that they ignored the very obvious warning signs of Khan’s murderous intent.

The truth is men like Khan are just evil, and no amount of woke magical thinking is ever going to change that.

The head of Stonewall, Nancy Kelley, has told the BBC that believing in biological sex is the equivalent of antisemitism.

This is the kind of swivel-eyed thinking that cannot and must not be tolerated. Stonewall is a respected, long-standing organisation that receives a good deal of taxpayers’ money from a number of government agencies. Time to sever those ties.

England rugby star Henry Slade, 28, says he doesn’t want the Covid jab because ‘be doesn’t fancy it’. None of us ‘fancy’ it, Henry, but it’s a question of public health. There are times when it’s not all about the individual – something that Henry’s generation, I fear, sometimes struggles to understand.

So sad that Eric Carle has passed away. I would have been about two when The Very Hungry Caterpillar was first published, but I used to read it to my little brother.

I did the same with my children, watching their faces light up as the ravenous grub munched its way through the story, their pudgy little fingers poking through the holes. 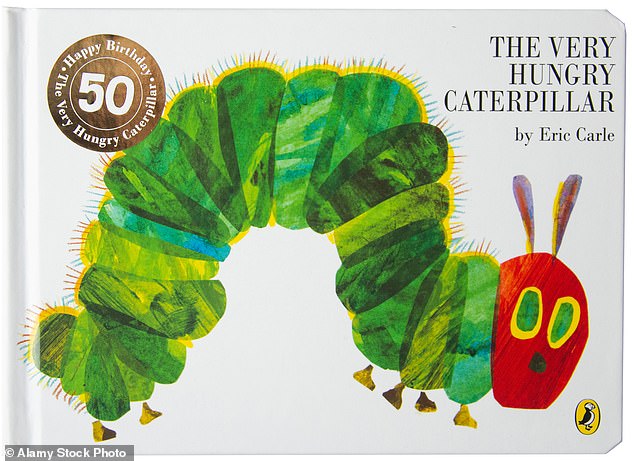 I would have been about two when The Very Hungry Caterpillar (pictured) was first published, but I used to read it to my little brother

It was that combination of simplicity and wonder that made it such a perfect children’s book. Especially when you compare it to the sanctimonious twaddle that passes for children’s literature these days.

The news that Trudi Juggernauth-Sharma, ‘wifelet’ No 68 of the late Marquess of Bath, is being turfed out of her cottage on the Longleat Estate by his son and heir, Ceawlin, now the 8th Marquess, does not surprise me one bit.

I’ve never met a toff who didn’t put land and class above all else. It doesn’t matter how bohemian they may seem on the outside; if you’re not one of them, don’t expect any favours.

Nonsense. It will just disrupt traffic flow, cause huge jams full of angry red-faced people, and make London even nastier and smellier for everyone.