EXPRESS INFORMER > News & Politics > SARAH VINE: Do Meghan Markle and Prince Harry actually WANT to be stripped of their titles?

Donald Trump is not my favourite person. But I couldn’t help feeling a certain grudging admiration for the old dunderhead last week.

Asked what he thought of the Duke and Duchess of Sussex’s decision to interfere in the US presidential election, he just gave a wry smile and said: ‘I wish a lot of luck to Harry… because he’s gonna need it.’

Mr Trump doesn’t always have a great way with words but even his sternest critic would have to concede that, on this occasion, he displayed an admirable flash of wit.

Seriously, though, if Harry and Meghan hoped to boost Grandpa Biden’s poll ratings, they may well have just shot themselves in the Manolos

A member of the British Royal Family, a scion of Empire, telling Americans how to vote in their own elections? Good luck with that, Harry.

Because, of course, the Yanks famously love being bossed around by pampered English princes. Look how well it turned out for George III.

Seriously, though, if Harry and Meghan hoped to boost Grandpa Biden’s poll ratings, they may well have just shot themselves in the Manolos.

If there’s one thing guaranteed to get your average, red-blooded Republican off straight to the polling booth, it’s the sight of a couple of entitled celebrities accusing them of being ignorant hate-mongers – from the comfort of an £11million mansion. At home, too, this intervention marks a turning point in the increasingly toxic soap opera of Harry and Meghan.

Because what the Prince has just done – break the cardinal rule of British Royalty, that is to say openly intervene in not just an election, but a foreign election – takes the growing rift between him and the Palace, to borrow a term from the American military, to DEFCON 3.

It would appear to be – and I am increasingly certain of this – a deliberate act of aggression designed to leave the Queen with no choice but to strip the pair of their Royal titles.

Such an act would play perfectly to their imagined narrative of always being the victims. 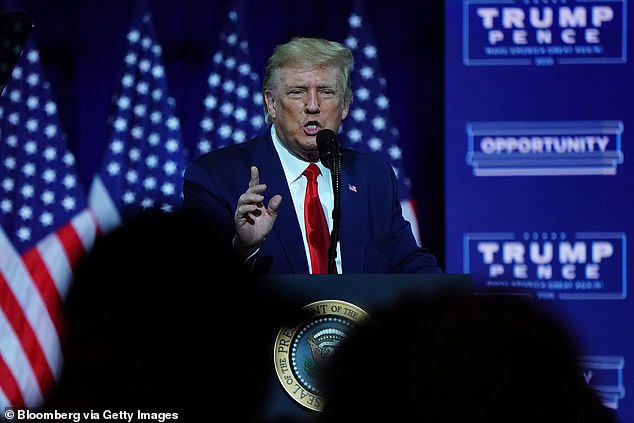 Asked what he thought of the Duke and Duchess of Sussex’s decision to interfere in the US presidential election, Trump just gave a wry smile and said: ‘I wish a lot of luck to Harry… because he’s gonna need it’

The speed with which Harry has gone from being the most relatable member of the Royal Family to someone who appears intent on not only rejecting everything the institution stands for but doing his utmost to undermine it, is astonishing. It had already become clear, even before he met Meghan, that the Prince was struggling to find his feet as a Royal. He harboured a lot of pent-up resentment, not only towards the constraints of the institution itself, but also towards his family for the way his mother had been treated.

I don’t think it was any coincidence that he chose as his bride a woman who was always going to struggle with the restrictions of monarchy.

He wanted out, whether he realised it fully or not, and Meghan was his ticket. Had he married some honking Camilla, content to push a pram around Windsor while wearing a pair of wellies and a Barbour, he would have been for ever trapped in the role of spare, relegated to a life in his brother’s shadow, always the also-ran, like his Uncle Andrew.

Meghan was never going to put up with that kind of life. That was abundantly clear right from the start to anyone with eyes in their head. This way, he gets to ‘find freedom’ and sock it to the institution which, it is increasingly apparent, he despises.

No more dreary wet weekends pressing the flesh with commoners for Harry: it’s all Netflix and chia seeds now.

And the fact that, by his actions, he is boxing his family – and with it his long-suffering granny – into a corner is just the cherry on the cake.

So, yes, Mr Trump is right to wish Harry luck. After all, it’s a huge gamble he’s taking.

I just hope the poor deluded boy knows what he’s letting himself in for. 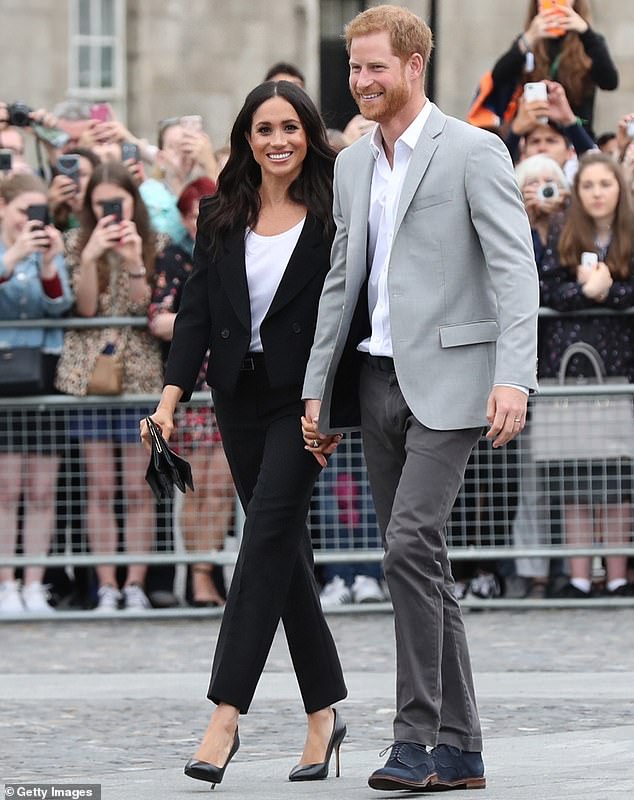 He wanted out, whether he realised it fully or not, and Meghan was his ticket

Millions have learnt they’re wrong to think wine counts as one of their five-a-day – even though it’s made of grapes. Next they’ll be saying the beans in my chocolate don’t count either…

Forget £10,000 fines for people who fail to self-isolate – how about similar punitive measures on the selfish idiots who are already stripping store shelves bare of toilet roll and necessities?

Students may have to remain on campus over Christmas. Oh no! Does that mean no stinking laundry to wade through – and no need to provide a vegan alternative to turkey? How will we cope?

Why Lizzo’s message is masking a big problem

Plus-sized pop star Lizzo appears on the front cover of American Vogue looking, it must be said, pretty fabulous.

As well as professing the now mandatory adoration for Joe Biden, she also held forth on ‘body positivity’, calling for more appreciation for ‘girls with back fat, girls with bellies that hang, girls with thighs that aren’t separated, that overlap.

‘Girls with stretch marks. You know, girls who are in the 18-plus club.’

Fair enough. But Lizzo is 32. Another couple of decades and all that so-called ‘body positivity’ will start to translate into heart disease, diabetes, joint problems and all the issues (including greater vulnerability to Covid) that come with obesity.

I know, because this is what happened to me, after a combination of the menopause, an underactive thyroid and, quite frankly, too many late nights in the company of Ben & Jerry.

I am all for advocating a more diverse appreciation of the female form. But there is a difference between appreciating a woman’s curves and encouraging an extreme aesthetic that can be just as lethal as extreme thinness. 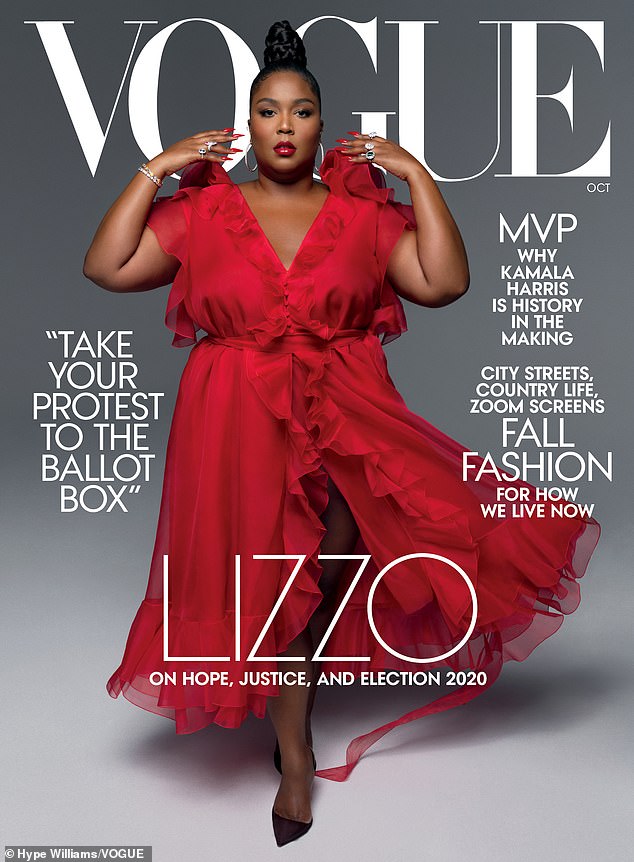 Plus-sized pop star Lizzo appears on the front cover of American Vogue looking, it must be said, pretty fabulous

In their infinite wisdom, the bosses of the National Trust have included the homes of Winston Churchill, Rudyard Kipling and William Wordsworth on a BLM-inspired list of shame for having ‘colonial links’. At a time when most employers are doing their utmost to stay solvent and protect the livelihoods of their employees, this once-great institution seems intent on committing suicide.

Smiling assassin Sasha Swire is pictured cosying up to David Cameron on today’s Page 3, and what a telling photo it is. While he looks glazed and distinctly put-upon, she’s all over him like a cheap suit. It was Swire, of course, who wrote in her diaries that Cameron once said he wanted to ‘push you into the bushes and give you one’.

Nicola Sturgeon’s gruesome anti-Covid advert gives the impression the only way to safely make a cup of tea is to wear a hazmat suit. Mind you, given Alex Salmond’s tenure as First Minister (he was alleged – although cleared – of having put his hands all over the place), there will be some Scottish civil servants who might not consider that such a bad idea.

Apparently, the new NHS Covid app may wrongly tell a third of users to self-isolate. If a dating app had such a rotten hit rate, no one would touch it with a barge pole.

Forget J. K. Rowling. The real feminist hero is Liz Truss who, by pushing back on calls to amend the Gender Recognition Act, has made clear, once and for all, that you can’t have individuals with penises intruding on women-only spaces, no matter how insistent the chorus from the wokerati.

The irony is that in a Parliament dominated by men, she’s the only one with a real set of cojones.

Honest Hurley could be a life-saver

Liz Hurley rises massively in my estimation after she said how much she regrets all those years spent sunbathing, having ‘lost count of how many of her contemporaries have had cancerous cells removed’. For someone who has made her fortune out of selling bikinis to be so honest about the realities of too much exposure to the sun shows rare – and perhaps even life-saving – integrity. I would like to say that it has encouraged me to sample Liz’s product.

Sadly, I don’t think I’m quite her target market.

If she branched out into kaftans, on the other hand…

If women ruled the world…

We’d have worked out that by imposing a blanket 10pm curfew all that happens is the entire world hits the streets at the same time which, when you’re battling a pandemic is, as the civil service likes to say ‘sub-optimal’. Slow handclap.