Sarah Cawood broke as she detailed the impact of coming off hormone replacement therapy (HRT) and antidepressants amid her breast cancer battle.

The presenter, 50, took to Instagram to share a heartbreaking update after going public with her stage one breast cancer diagnosis in September.

Sitting in her parked car, Sarah wept while explaining how she has had to ditch what she was taking to help relieve her menopause symptoms and take different medication for her hot flushes, which has depression as a side-effect.

Heartbreaking: On Monday, Sarah Cawood, 50, broke down in an Instagram video as she detailed the impact of coming off HRT and antidepressants amid her breast cancer battle

Sarah captioned her raw video: ‘I solve one problem. Then another pops up in its place. Breast cancer is a f**king t**t.’

She told her followers: ‘I’m asking you lot for a favour today. I’m sorry I look so tired and washed out and s**t…

‘And also when I start my Tamoxifen (breast cancer drug), I will have to come off my SSRI (Selective serotonin reuptake inhibitors, an anti-depressant). 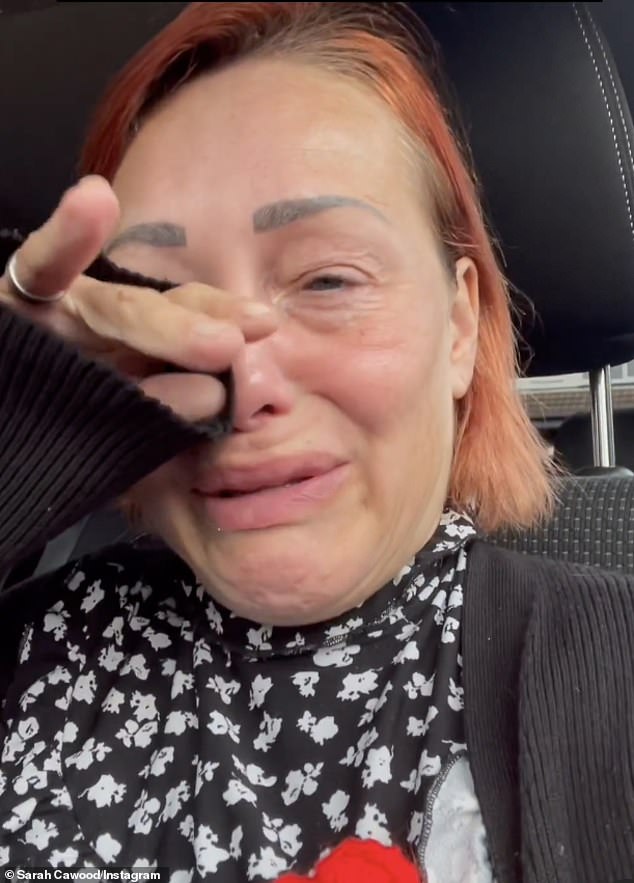 So tough: The presenter explained how she has had to ditch what she was taking to help relieve her menopause symptoms and take different medication for her hot flushes 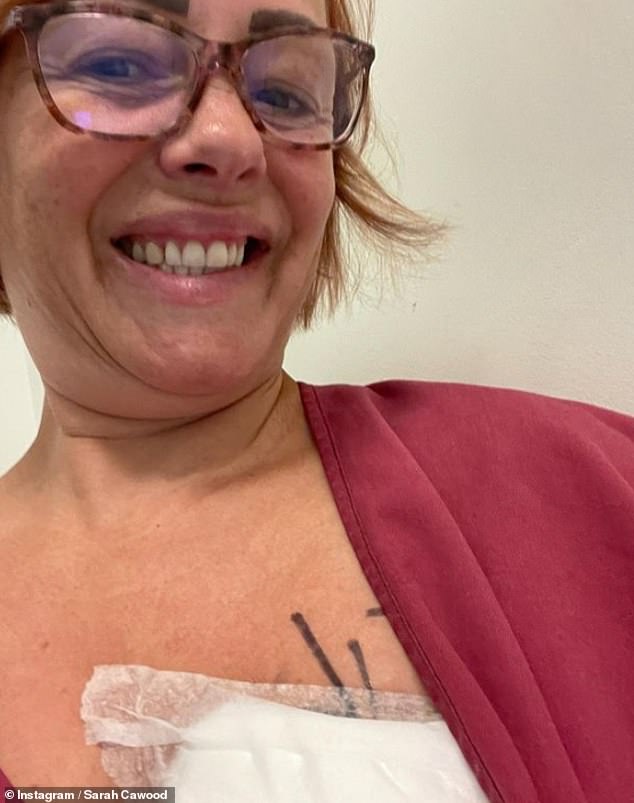 Health update: In September, Sarah revealed she’d been diagnosed with stage one breast cancer, after doctors discovered a lump during her routine mammogram

‘I was on a very low dose of citalopram. That and the HRT completely wiped to my menopause symptoms. I was golden. I was coasting. Nothing bothered me, I was really calm, I never lost my temper.

‘Now, I’m on the Clonidine one of the side effects is depression, which I have noticed almost immediately I started taking the pills. But I only found out today that was a side effect

‘Plus now I’m coming off the citalopram so I’m cutting the little pills in half. And so I don’t know what to do. Every time I solve a problem, another one pops up in its place.

‘So I don’t know if any of you breast cancer ladies have the solution because apparently Tamoxifen causes depression too.’

At this point, Sarah wept and through the tears uttered: ‘I’m so sorry. And I didn’t wanna cry because everyone will send me nice messages and I won’t have time to answer them and I’ll feel guilty. 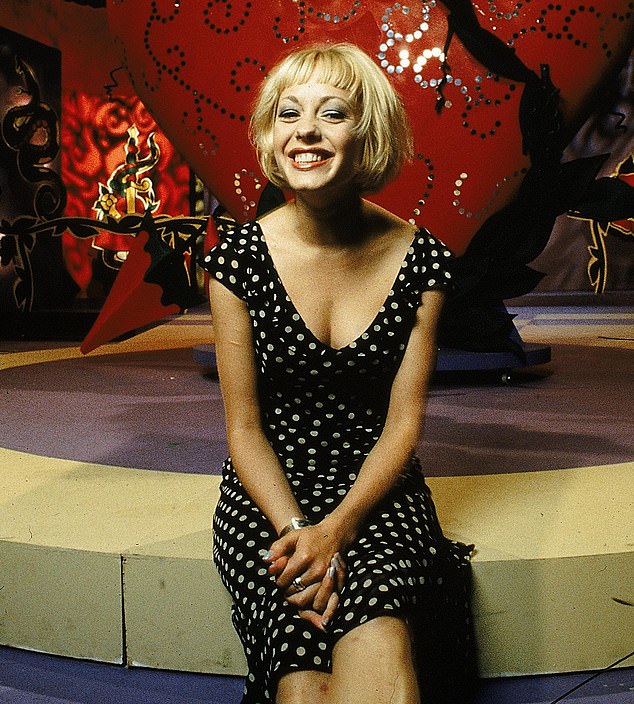 Throwback: The presenter who previously fronted 90s favourites Live And Kicking and Top Of The Pops, admitted that she feels ‘lucky’ that doctors discovered the disease early

‘But it’s was like this all weekend and it’s just not like me, so I don’t know what the solution is. I’ve got to get an appointment with a doctor tomorrow but I’m not a priority.

‘And I hate feeling like this because I don’t want like to pass me by, it’s so precious So, if any of the pink army out there can help what do I do?

‘I need to get rid of the hot flushes but I also need to protect my mental health… so I don’t know what to do. I didn’t know if anybody had any advice?

‘And the hot flushes are much better but I feel like everyone’s p**sing me off. And all my kind and friendliness has gone and I’m hating on my family and I just want to be on my own all the time.’ 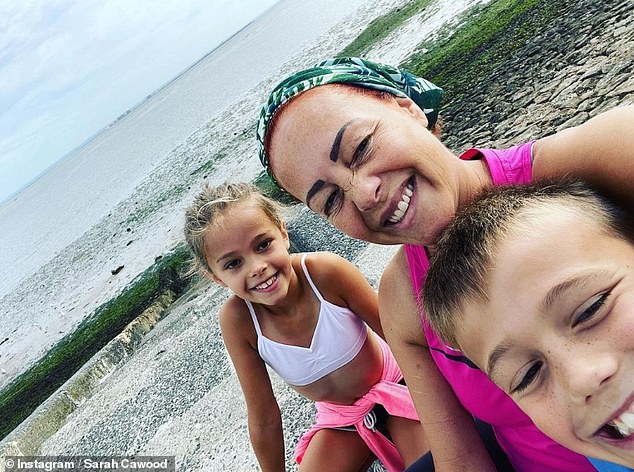 Important: Along with undergoing treatment for her diagnosis, Sarah said she is focused on raising her two children Hunter, 10, and Autumn, nine

Back in September, Sarah told The Sun that she will undergo a lumpectomy following by radiotherapy and long-term hormone treatment.

Explaining the moment she received her diagnosis, Sarah explained that after undergoing a routine mammogram doctors sent her for a follow-up, having discovered a lump in her breast.

Following an ultrasound and a biopsy, she was told that the lump wasn’t a cyst, and she assumed the worst as she headed to meet the surgeon.

Despite receiving a cancer diagnosis, Sarah, who lives in Essex with her husband Andy Merry and their two children, said doctors reassured her that the condition was treatable.

The TV personality even joked it was the ‘Carlsberg of breast cancers’ in reference to the popular ‘if Carlsberg did’ advertising campaigns of the early noughties. 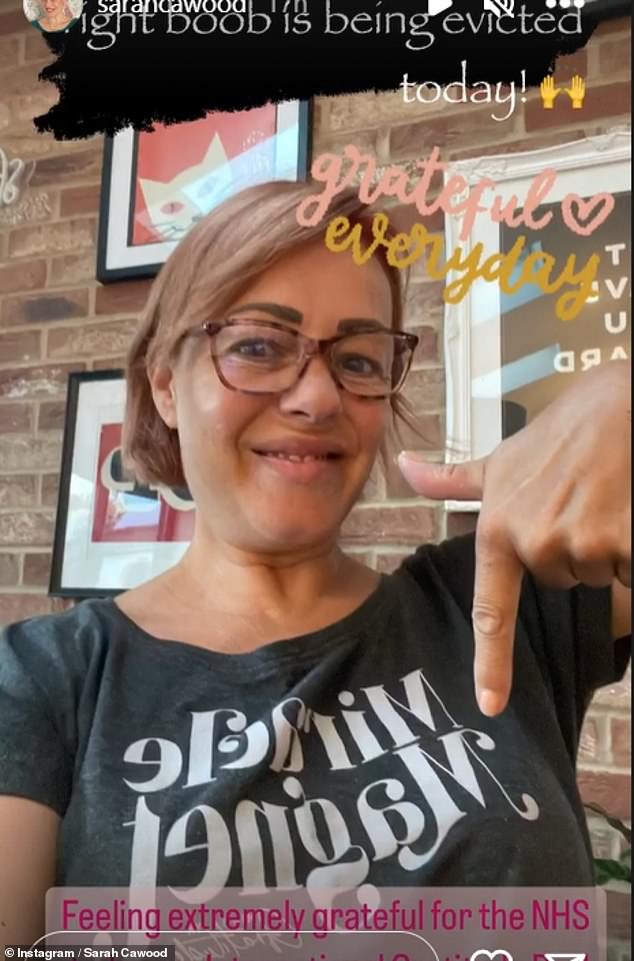 Progress: Following her diagnosis, Sarah revealed that she will undergo a lumpectomy, radiotherapy and a long-term hormone treatment

She explained: ‘The surgeon went, ”Can you see that? That’s a very small cancerous lump”. And I went, ”Oh, OK, is it aggressive?”.

‘It really is the Carlsberg of breast cancers. If you have to have it, this is the one to have. I feel really lucky.

‘There are people that really are up s**t creek without a paddle, who have cancer, and I am not that person.’

Sarah rose to fame in the 90s for her presenting role on The Girlie Show, before hosting Live & Kicking, Top Of The Pops and the Eurovision Song Contest.