EXPRESS INFORMER > Sports > Saracens Nick Tompkins and Jackson Wray claim ‘no one likes us, we always get abuse no matter what’

The Premiership’s bull in a china shop returns on Friday night, and listening to two key Saracens, it will delight in coming back spitting, snorting and bucking.

Branded and shoved among the Championship cattle, Sarries were dumped out of sight and out of mind by their top-flight foes after salary cap breaches exposed by Sportsmail in 2019.

Friday night’s opener in Bristol marks their first meaningful Premiership match in 840 days, since they won the league at Twickenham by beating Exeter 37-34, as after that the goalposts kept changing and their points tally was rendered irrelevant by their forced relegation.

Saracens know the emotions around their demotion have not subsided. They are expecting to be cast as the villains of the league and booed across the country.

‘Definitely,’ Nick Tompkins, the Wales centre, tells Sportsmail. ‘You still see stuff where people say we should never be back in the Premiership — and whether that’s bitterness or…’

‘They hope we’re never back in the Prem, as they’d never win!’ interrupts jovial Jackson Wray, captain while Owen Farrell is away after Lions duty.

‘It doesn’t worry me,’ Tompkins resumes. ‘They can do what they want. We’ve had it all our lives. There will be hostility, it’s part and parcel of the job.’ 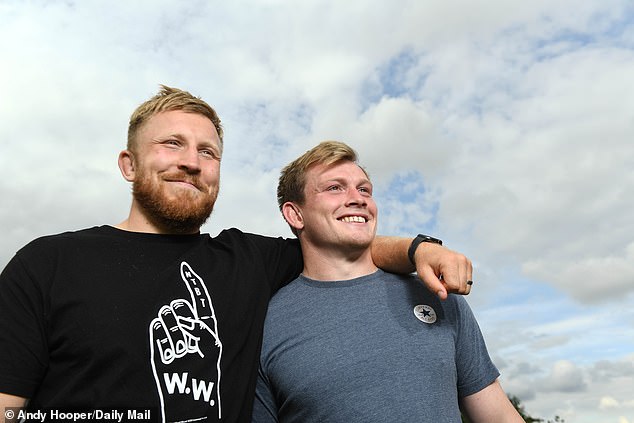 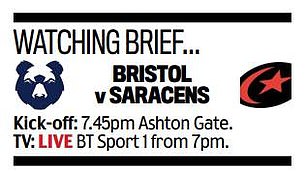 ‘It’s not as if anyone enjoyed playing us anyway!’ laughs Wray, the back-rower.

‘They never liked us. No one likes us, we always get abuse no matter what, it’s just now everyone has an excuse for it.’ So how did their year in isolation — their punishment — feel?

‘To watch the European Cup, games we would have backed ourselves to be in, the Premiership final, we would have fancied ourselves, that’s a punishment in itself, to watch others lift the trophy,’ explains Wray. ‘We put a positive spin on it but it wasn’t where we wanted to be.’

Tompkins adds: ‘Tell it how it is. Not only did we get relegated, but a lot of people had to leave, a lot of abuse was thrown, a lot of shame was put on people, unfairly, and there were a lot of clubs who have been known to cheat at other things who threw shade.’ 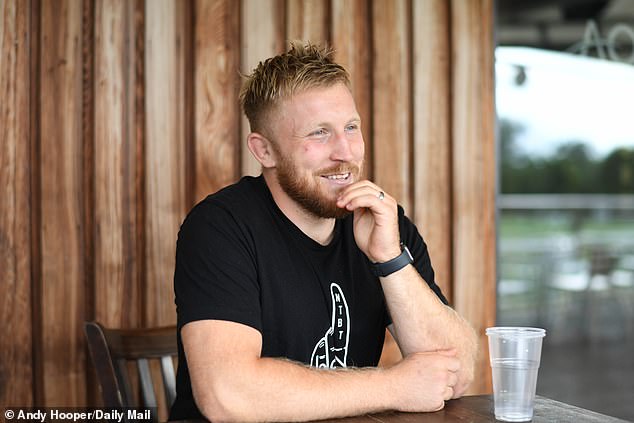 That last comment is a clear reference to Harlequins — some of their players being the most vocal of Sarries’ detractors — and the Bloodgate saga of 2009.

‘There was definitely a lot of animosity that came off the back of it, at players as well — which was ridiculously unfair. I don’t know what lesson we needed to learn as players, as we weren’t in control of what happened, but we’ve taken it.

‘I don’t want to say we’re making up for anything, because I don’t feel we need to, but we owe it to the fans to play well in the Prem — that’s the feeling.’

Having accepted their fate, Saracens remain resolute, ready to move on but still determined to defend their honour. 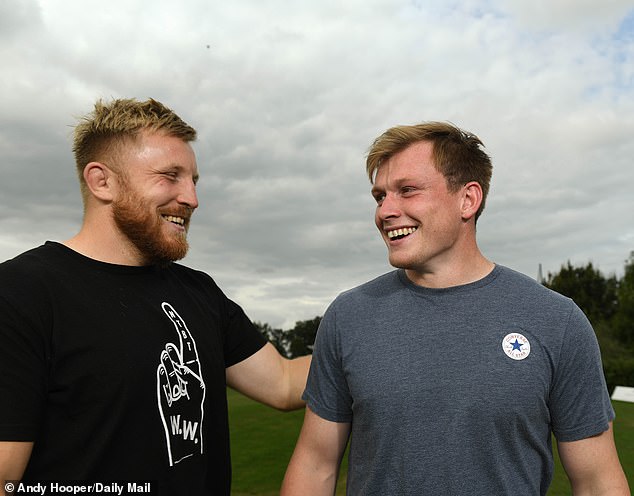 ‘A lot of people in our family know the actual story, which is very different from those who know very little and are just re-tweeting,’ says Wray when asked about the impact on the players’ loved ones.

‘The facts of what went on, and the ruling that came, are all there in public records. It’s only when you want to know the facts that you have more clarity. They believe in us, that we’re not bad people. All you need to do is say, “We’ll be fine, we’re getting past it”, and that means the most.’

‘My mum was just worried how far away I was going!’ quips Tompkins — one of six players who had to leave on loan, the midfielder being sent to Newport’s Dragons. 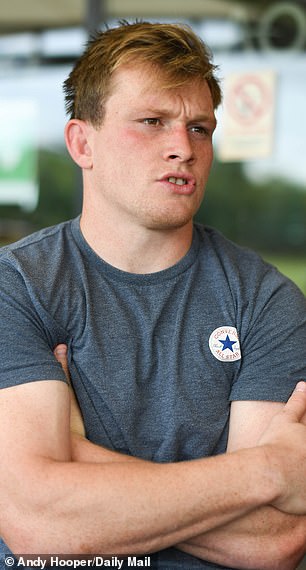 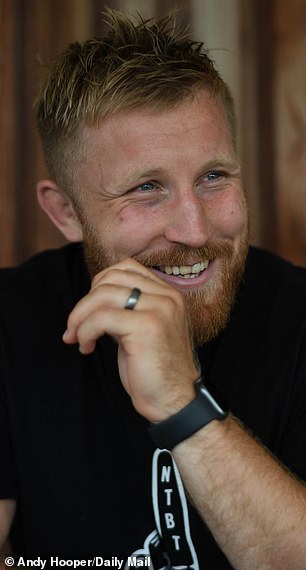 ‘Not far enough?’ Wray digs back. Those who moved temporarily — Ben Earl and Max Malins to Bristol, Alex Lozowski to Montpellier, Nick Isiekwe to Northampton, Alex Goode to Japan and Tompkins to Wales — felt awkward leaving their team behind.

‘We joke about it, but I did feel guilty,’ says Tompkins. ‘There was a decision to be made, a personal one and I made it, don’t regret it, but I have no problem saying I didn’t really want to go. It wasn’t something I felt easy doing.’

Tompkins was there for Saracens’ promotion, having returned in April after an ‘emotionally draining’ time — not just to a ‘load of abuse’ from his mates, but to a different club.

Despite keeping their core, Saracens’ squad has changed vastly since the salary cap breaches.

Nine of the Premiership-winning 23 who beat Exeter in 2019 have left, with four back from loans.

15 Alex Goode (BACK from Japan loan)

13 Alex Lozowski (BACK from Montpellier)

4 Will Skelton (LEFT for La Rochelle)

‘It was really weird, with so many new faces,’ he explains. ‘Almost overwhelming at first. The group’s been through so much. It’s nice to see that they’ve taken all that strain and come out of the other end strongly.’

And that is the thing; Wray, who stayed, is convinced this is now a tougher Saracens squad forged in fires of adversity.

‘To be relegated, to have Covid, the longest pre-season of all time, to lose to Cornish Pirates, to then build, we’ve learned a lot and come a long way as a group,’ says Wray. ‘No one has ever gone through that, so we’ve got a unique element about us now. When you overcome a challenge like that, you become more resilient. It was the Covid restrictions dovetailing with their Championship campaign that made it eerier.

‘We played Richmond, literally in a park, and there was no one there,’ Wray adds. ‘There were a lot of things that were a shame, like we played Nottingham and just got a takeaway and were on the bus — spent no time with them, with the fans, with anyone.

‘You have to front up. We lost to Pirates and it woke a lot of people up to what we needed to do. From then on, we did very well. It was an experience and I wouldn’t replace it for anything.’

With ‘good characters’ back and young talent ready to kick on, Saracens are every bookmaker’s favourites for the title. Tompkins rolls his eyes at the mention of that before, laughing, Wray adds: ‘I don’t know if that’s a reflection of us or the standard last year.’

Sarries watched last year’s play-offs, Quins winning the league conceding 10 tries in two knockout games but scoring 13, and knew their intensity, defensive prowess and big-game nous would never allow that to happen if they were there.

They are determined to take it all in, enjoy their comeback, but are only here to win everything again while leaving bloody noses across the land. Saracens ready to unleash hell is a frightening prospect. But they are not solely motivated by revenge.

‘Why go round with hatred?’ says Tompkins. ‘Let’s enjoy it. We deserve to enjoy it.’

‘We’ve never been about anyone else — we never make it personal,’ concludes Wray, a little smile appearing as he concludes: ‘Unless we’ve got a reason to.’