Bernie Sanders was declared the winner of the Nevada caucuses Saturday despite only a fraction of the vote in.

‘I’m delighted to bring you some very good news,’ a jovial Sanders announced to a crowd of supporters at his rally in San Antonio, Texas Saturday evening.

‘I think all of you know we won the popular vote in Iowa. We won the New Hampshire primary. And, according to three networks and the AP, we have now won the Nevada caucus,’ Sanders said as audience members erupted in chants and cheers.

Sanders then predicted he would go on to ‘sweep’ the primary elections in the rest of the states.

Trump went ahead and congratulated Sanders before most networks had called the race.

‘Looks like Crazy Bernie is doing well in the Great State of Nevada. Biden & the rest look weak, & no way Mini Mike can restart his campaign after the worst debate performance in the history of Presidential Debates,’ Trump said.

‘Congratulations Bernie, & don’t let them take it away from you!’ the president wrote.

In response to the president’s tweet, Sanders told rally-goers not to reveal how much support he had in the country’s most populous red state.

‘Don’t tell anybody, I don’t want to get them nervous, we are going to win the Democratic primary in Texas. And you know, this is also important the president gets very, very upset easily, so don’t tell him we’re going to beat him here in Texas,’ Sanders said.

Bernie Sanders declared victory in the Nevada caucuses as he rallied supporters in San Antonio, Texas on Saturday evening 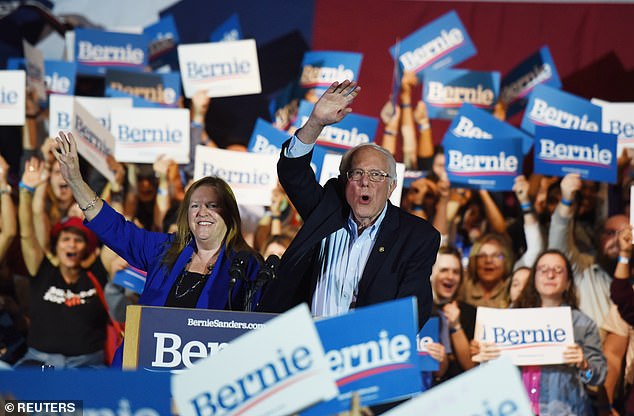 Although only 4 per cent of reporting was in by the time of Sanders’ rally, several networks had called the caucus for Sanders as he took a substantial lead with more than 50 per cent

Sanders left Nevada before precinct locations had adjourned their caucuses and headed to Texas for two rallies Saturday.

Texas is a state Sanders will likely struggle to gain support in the Democratic primary, since voters are generally more moderate in the Lone Star State.

During his first rally Saturday in border city of El Paso, Texas, Sanders did not bring up his jarring lead.

As Trump tweeted, NBC News said the race was ‘too early to call.’ The network then called the race as Sanders’ rival Joe Biden was speaking in Nevada, claiming his second place finish was enough to reboot his struggling campaign.

‘I know the press is ready to declare people quickly dead,’ Biden told his supporters.  ‘We’re alive and we’re coming back and we’re going to win.’

One person loudly yelled that Biden was the ‘comeback kid,’ while Biden boasted he would go on to win South Carolina, where voters will head to the polls in a week.

Sanders is coming off a win in New Hampshire, with Pete Buttigieg coming in a close second in the Granite State. In Iowa, Buttigieg beat Sanders in the delegate count by a hair, while the Vermont senator won the popular vote. Biden finished in fourth place in Iowa and fifth place in New Hampshire.

Reporting for Nevada started to filter in the early afternoon Saturday, though stayed at 3 per cent for more than an hour, as Democrats tried to avoid having reporting problems like they did in Iowa thanks to a malfunctioning app. CNN reported that some precinct chairs had trouble calling in and reporting the results.

Despite the major momentum for the Vermont senator in the Silver State, the candidate had already left to campaign in Texas before the Nevada caucus sites adjourned. 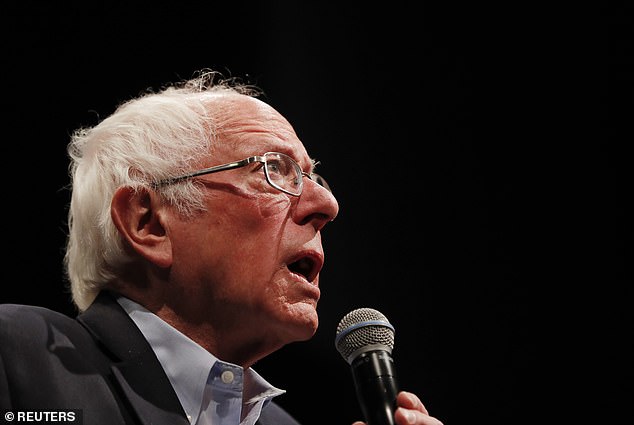 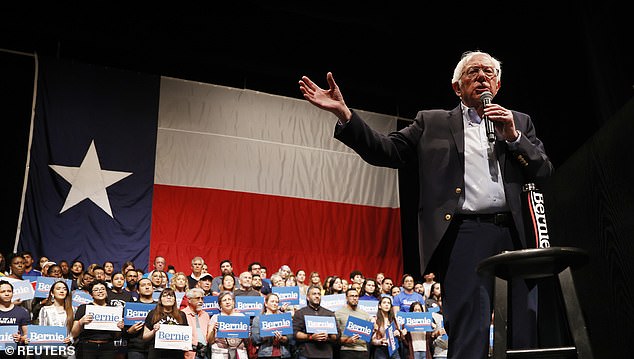 Sanders, however, left Nevada before caucus sites adjourned Saturday for two rallies in Texas, a state where he struggles among more moderate Democratic voters

President Trump sent a back-handed congratulatory tweet to Bernie Sanders before most networks had called the race for the Vermont senator. Trump said Biden and the other Democratic hopefuls looked ‘weak’

Buttigieg and Biden stayed in Las Vegas, while Amy Klobuchar headed back to her home state of Minnesota for a rally. Minnesota is one of the 14 so-called ‘Super Tuesday’ states.

Buttigieg used his event to both congratulate Sanders and warn Democratic voters about the victor.

‘I congratulate Senator Sanders on a strong showing today, and we certainly celebrate many of the same ideals,’ Buttigieig admitted, although he rarely likens himself to the Democratic socialist candidate.

‘But before we rush to nominate Senator Sanders, in our one shot to take on this president, let’s take a sober look at the consequences – for our party, for our values, and for those with the most at stake,’ he urged.

The former mayor of South Bend, Indiana also reminded the 300 or so audience members that he won against Sanders in Iowa.

‘Ours is the only campaign that has beaten Senator Sanders anywhere in the country,’ he said to a cheering crowd gathered at a the Spring Preservation nature area just five miles from the Vegas strip.

The caucuses kicked off at noon on Saturday, though 75,000 Nevada Democrats had participated in early voting.

At the Bellagio Hotel on the iconic Las Vegas strip, 123 people participated in the caucuses, with the room breaking out into chants for Sanders and Biden – as the vast majority only supported those two candidates.

The site consisited of residents from a 2.5 mile radius as well as shift workers from the hotel who wanted to participate in the middle of the work day.

There was a small showing for Elizabeth Warren as well, whose debate performance against newbie Mike Bloomberg dominated the headlines in Nevada all week after Wednesday night’s Democratic debate.

At the Bellagio, for candidates to be ‘viable’ at least 19 caucus participants had to back them.

Only Sanders and Biden qualified during the first counting, while seven people came out for Warren. 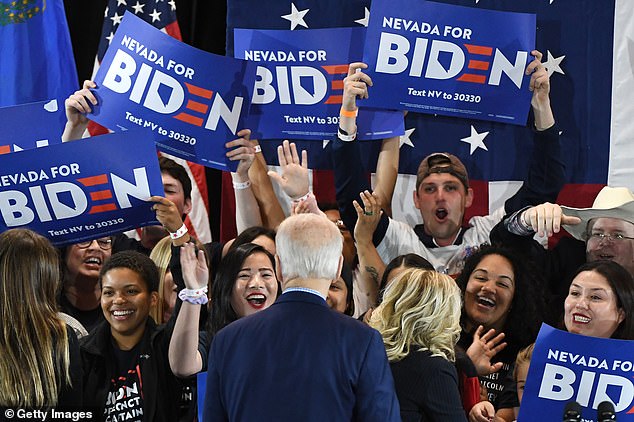 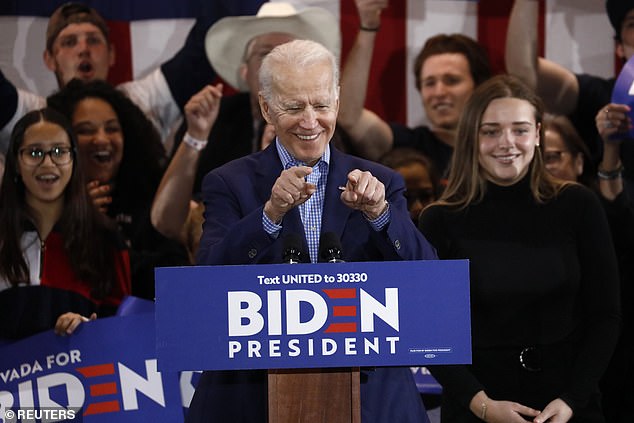 ‘I know the press is ready to declare people quickly dead,’ Biden said Saturday afternoon in Las Vegas. ‘We’re alive and we’re coming back and we’re going to win’ 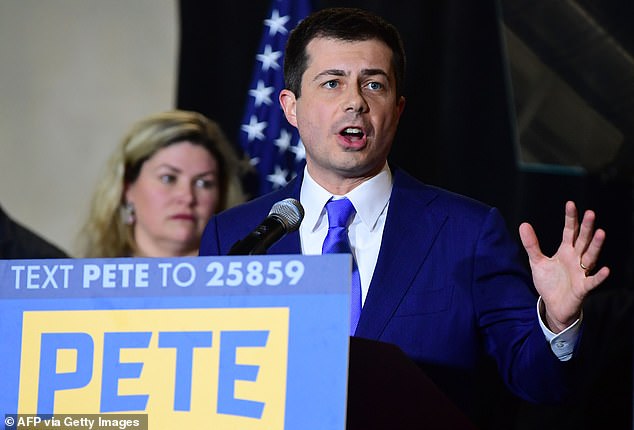 Pete Buttigieg also stayed in Las Vegas to address supporters. At his event, Buttigieg congratulated Sanders though warned the party against nominating the democratic socialist 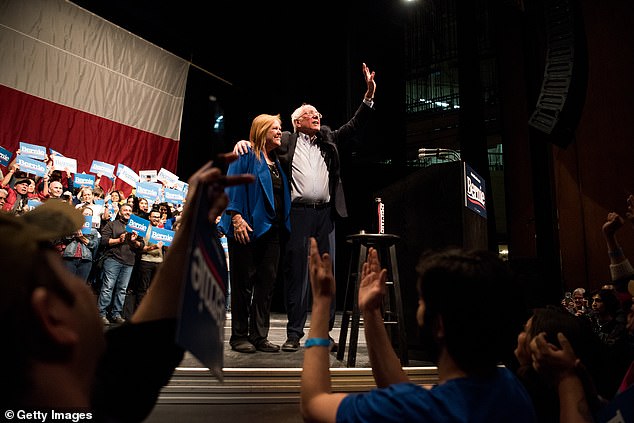 Bernie Sanders, alongside his wife Jane Sanders, held a rally in El Paso, Texas Saturday before the full results of the Nevada caucuses were in 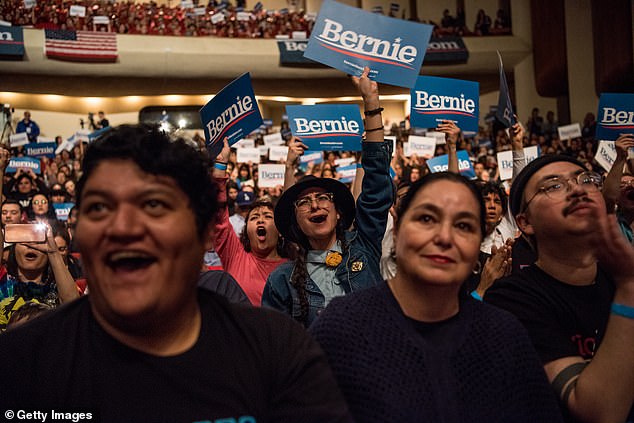 Bernie Sanders supporters in El Paso, Texas cheer on the Nevada caucus result. Sanders moved ahead to Texas, which holds its Democratic primary on March 3, along with 13 other ‘Super Tuesday’ states 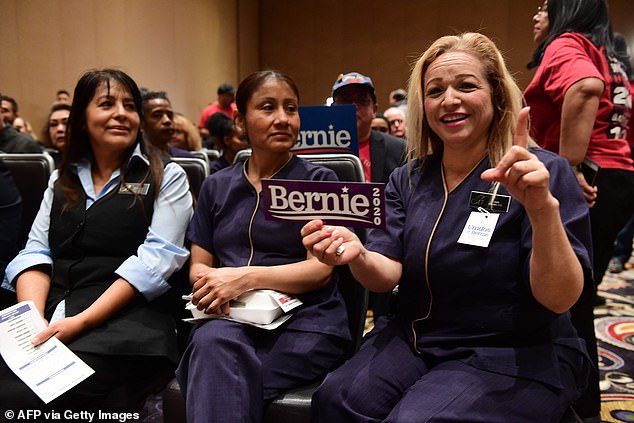 Bernie Sanders supporters hold up a bumper sticker at the Bellagio, one of the large caucus sites on the iconic Las Vegas strip 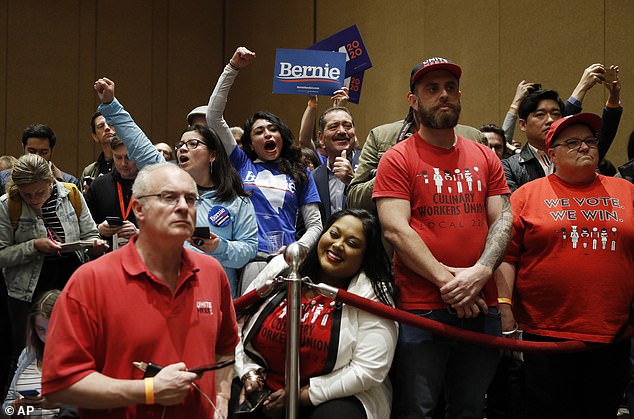 Bernie Sanders’ supporters at the Bellagio hotel cheered for their candidate, who won that particular caucus site 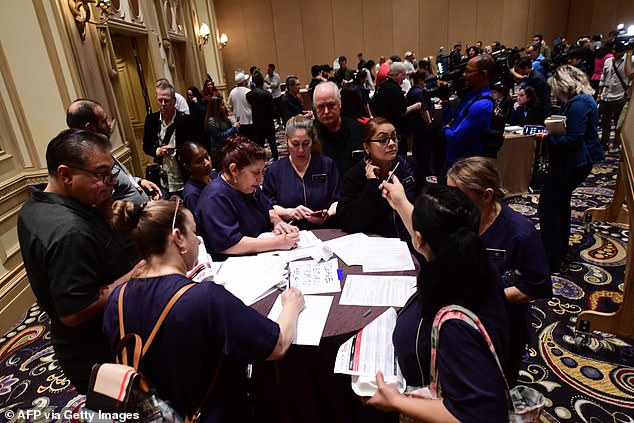 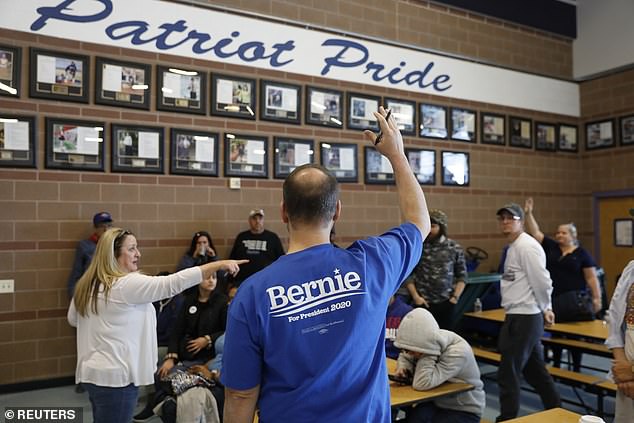 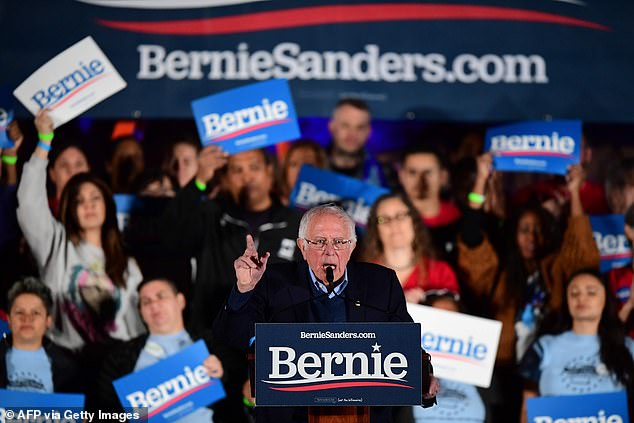 Sen. Bernie Sanders held a final Get Out the Caucus Rally at the Springs Preserve Ampitheater in Las Vegas Friday night 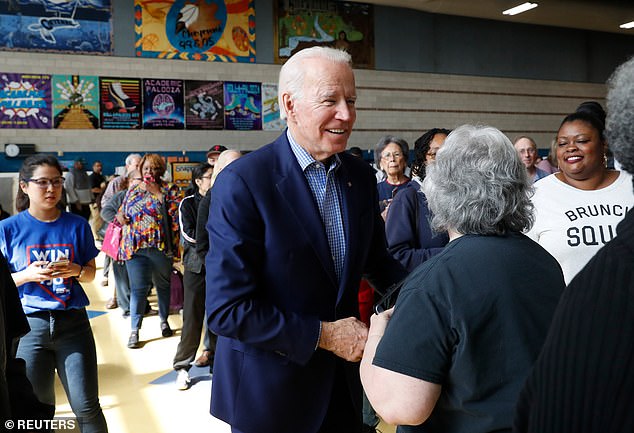 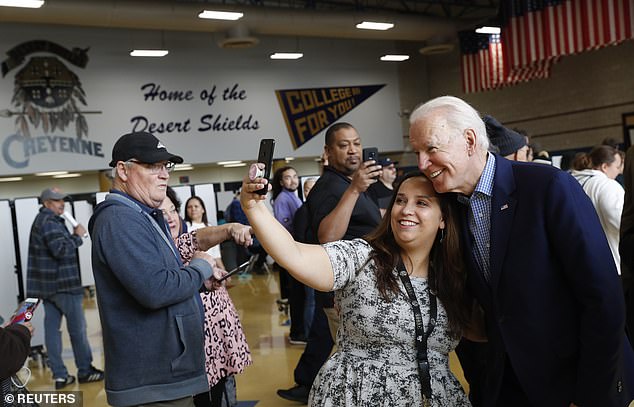 Joe Biden looked poised to have a stronger showing in Nevada than he did in Iowa and New Hamsphire, coming in a disappionting fourth and fifth place 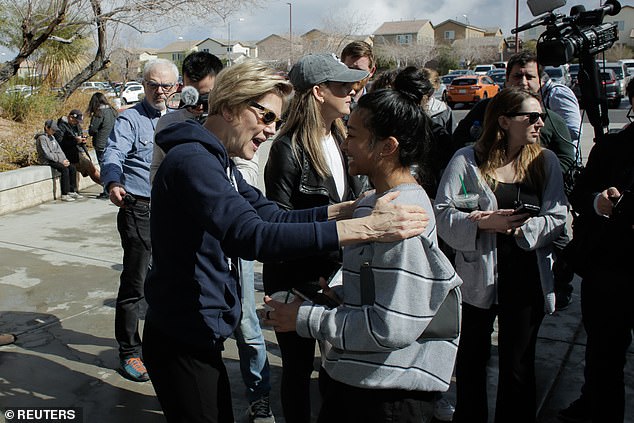 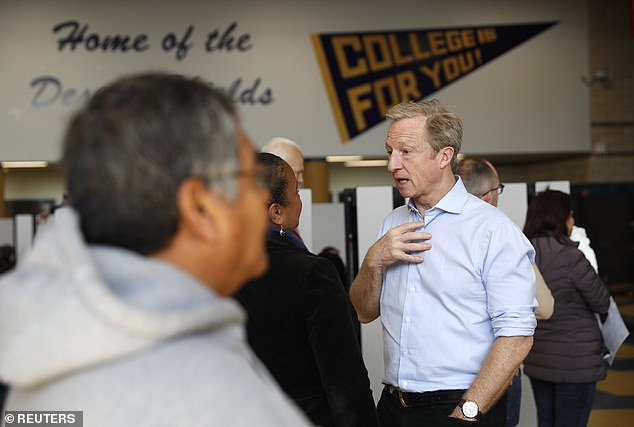 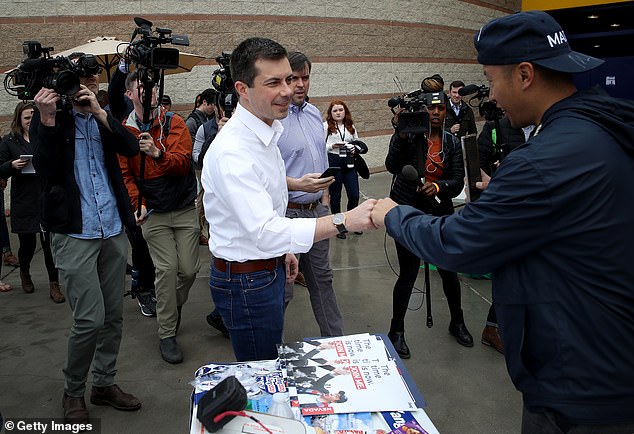 Pete Buttigieg showed up to caucuses being held at Sierra Vista High School on Saturday. Buttigieg and Biden both stuck around in Nevada, while the other top candidates left 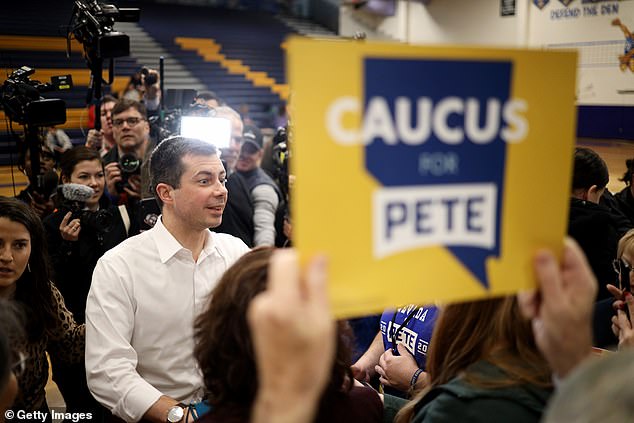 A supporter of Pete Buttigieg holds up a ‘caucus for Pete’ sign as the presidential candidate greets voters at Sierra Vista High School in Las Vegas, Nevada 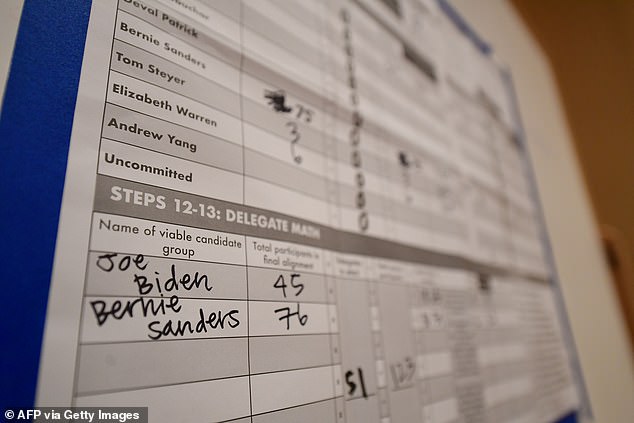 Caucus totals were reported on these paper worksheets, one for each precinct. Caucus volunteers had to factor in early vote totals along with totals on-site 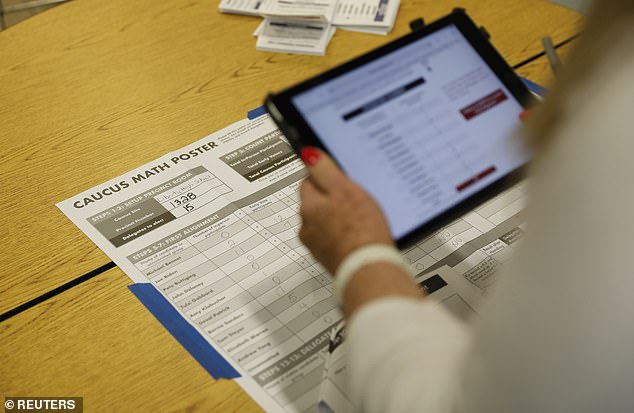 The vote totals from caucus sites are being entered into an iPad. The Nevada Democrats are hoping to avoid what happened in Iowa, in which an app malfunctioned and a full counting of the vote wasn’t available for days

One attendee even realigned from Warren’s group early, deciding to support Sanders instead.

When the early realignment was announced over the microphone, Sanders’ supporters cheered enthusiastically while Biden supporters booed.

The site only required one realignment, with Sanders ultimately earning 76 total ballots cast for him after one person moved to the senator’s camp and Biden earned support from 45 caucus-goers – earning 6 more after the realignment.

The president of the caucus-site announced that they would send 32 delegates to the county convention for Sanders and 19 for Biden.

Only two people remained uncommitted in the caucuses at Bellagio.

The Bellagio is an at-large caucus site, encompassing several hotel and casino workers, and there were tables set up outside of the ballroom where attendees could register to vote.

Ahead of the caucuses, the tables were surrounded by individuals filling out the paperwork to be able to participate.

A rideshare driver on the way to the site told DailyMail.com that he wanted to cast a ballot, but after finding out it was a bigger ordeal than pressing a button, decided he had to work and earn money instead.

At Rancho High School in north Las Vegas two precincts simultaneously caucused in a gymnasium. At both precincts, Sanders was the only viable candidate – and early voters far outnumbered those who showed up to the school.

Happening directly beside that precinct was another that overwhelmingly felt the Bern.

Of the 16 Democrats who came to caucus in person, 12 were there to support the Vermont senator. Sanders was supplemented by an additional 20 early votes.

He won all 13 delegates from that precinct, while earning 24 from the adjacent precinct. No other candidate won any.

However, there were 11 precincts caucusing at Rancho High School overall, with Biden and Steyer also winning some delegates.

Nevada began caucusing in primary contests in 1981, but the state did not earn early primary status until 2008, when the Democratic National Committee made Nevada the second-in-the-nation caucuses following Iowa’s caucuses and New Hampshire’s primary election.

The final two Nevada polls that dropped Friday had shown Sanders with a comfortable lead. And he was leading in entrance polls Saturday as well. 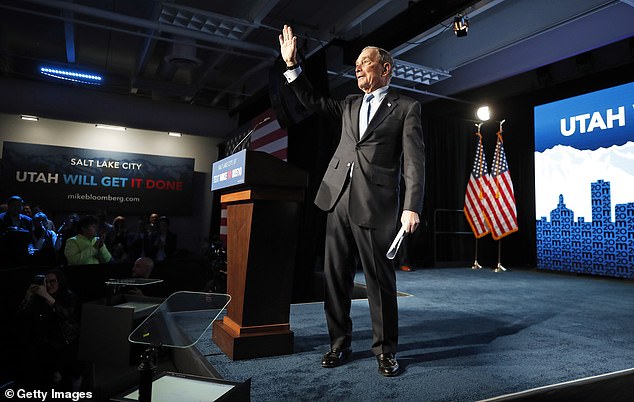 Mike Bloomberg made his debate debut in Nevada Wednesday night, but then headed to Utah – a Super Tuesday state. The billionaire has staked his chances on competing in the 14 states that vote on March 3, instead of competing in the first four, which includes Nevada 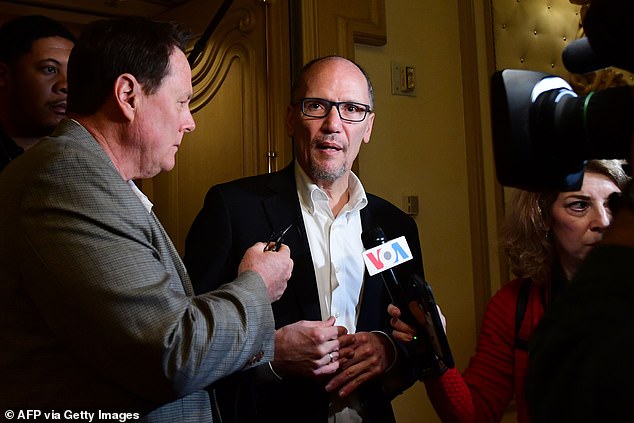 Democratic National Committee Chairman Tom Perez told DailyMail.com earlier in the week that he couldn’t predict when the results of the Nevada caucus would come out

Democrats are hoping that Nevada’s caucuses go off without a hitch after an app glitch led to chaos in Iowa at the beginning of the month, with Sanders’ campaign still challenging the count that saw Buttigieg win by a tiny fraction.

Earlier in the week, Democratic National Committee chairman Tom Perez told DailyMail.com he couldn’t predict when results would be up for Nevada.

Perez couldn’t guarantee whether the crop of 2020 presidential candidates competing in the Democratic primary would see results by the end of Saturday.

While the Nevada Democratic Party is holding its official nominating contest on Saturday, the state experienced days earlier a massive number of participants in its first-ever early voting in Nevada.

In the 2016 primaries, around 1.3 million of the 3 million residents in Nevada voted.

The population of the western state is mostly contained to Las Vegas, Henderson and Reno, its three largest cities.

The state ended up voting to nominate Hillary Clinton and in the primaries voted for Clinton by a margin of 2.4 per cent more than Donald Trump.