Digging in! Incredible moment sand octopus uses its tentacles to burrow into the ocean floor and hide from predators

A sand octopus has been filmed wriggling its tentacles to create a burrow into the ocean floor and disappearing as a disguise technique to hide from its predators.

Footage shows the animal moving across the seabed before curling its tentacles and burying itself below.

A sand octopus has been filmed moving across the sea bed in Port Phillip Bay, Australia

The sand octopus eventually disappears as it submerges into the sand.

This octopus, native to the waters around the Great Australian Bight and Tasmania, uses unique techniques to hide from predators. 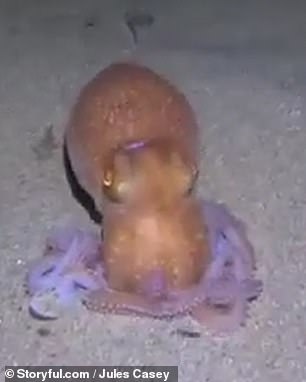 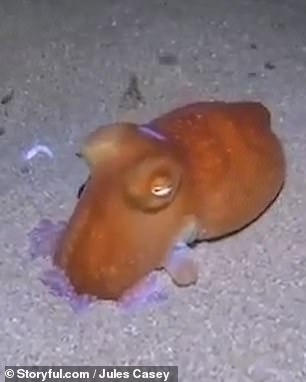 It begins by using its siphon or funnel to shoot jets of water into the sand and then digs into the hole with its arms.

The sand octopus then constructs a 20-centimetre burrow and reaches two arms to the surface as a ‘chimney’ to breathe through. 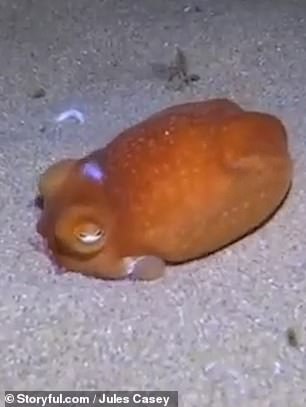 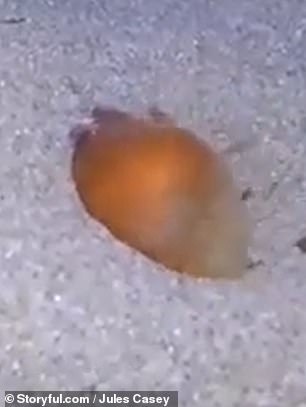 It will secrete a kind of mucus to allow the walls to remain in place and pull in its ventilating tentacles to appear completely buried.

The southern sand octopus is thought to lack colour changing organs, known as chromatophores, which other octopus species use to camouflage themselves from predators.

It instead uses this digging technique throughout the day and resurfaces at night.