Gov. Gavin Newsom on Monday declared the monkeypox outbreak a state of emergency in California, despite a gay, leather kink festival taking place in San Francisco over the weekend – a little more than a year since kids were banned from going back to school due to COVID.

California became the second state in three days to take the step, after New York, and Newsom said the declaration will help state officials better coordinate a government-wide response, seek more vaccines and lead outreach and education efforts on where people can get treatment and vaccination.

A booth offers information on monkeypox at the ‘Dore Alley,’ or also called the ‘Up Your Alley’ fetish and leather festival on Folsom Street in San Francisco on Sunday, as the viral disease keeps spreading in California. Nearly 800 cases of monkeypox have been reported in the state

Nearly 800 cases of monkeypox have been reported in California, according to state public health officials. 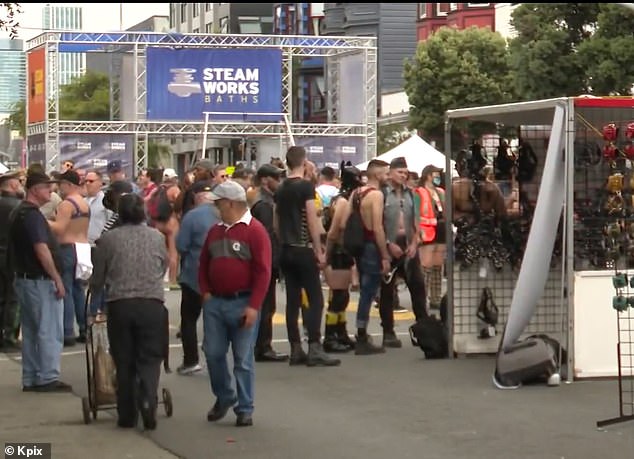 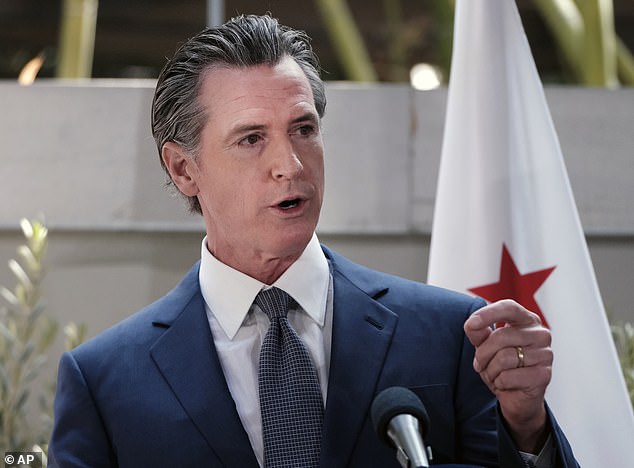 California Gov. Gavin Newsom declared a state of emergency over monkeypox on Monday, becoming the second state in three days to take the step after New York — the epidemic of the viral disease 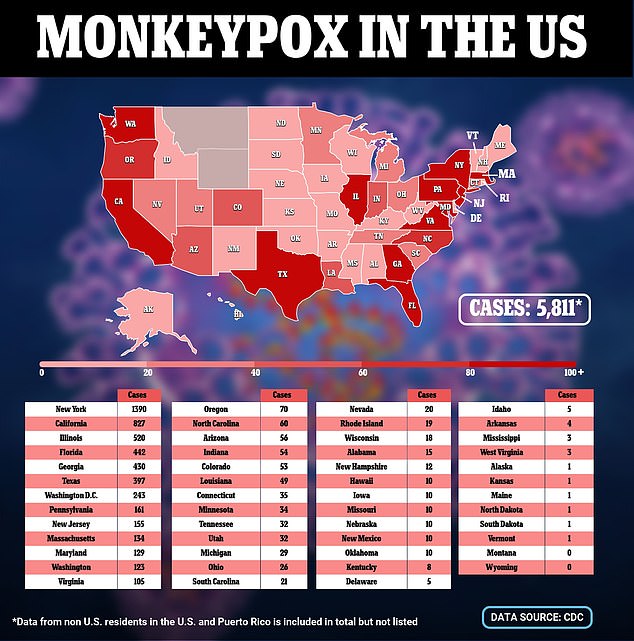 Kinky games and street vendors selling leather apparel including chokers, collars, whips and bondage kits are a common at the venue, which mostly attracts gay men out of any demographic. A sound stage was also set up for festivalgoers to dance.

‘I like to think of it as the biggest leather block party,’ Executive Director Angel Adeyoha told ABC 7.

She raised her concerns, however, over the timing of this year’s festival, especially as it took place soon after the City of San Francisco announced a state of emergency over monkeypox on July 28.

‘I don’t know if you came in previous years, but you would be body to body. Clearly that’s not the case now, we’ve made room for folks,’ Adeyoha told ABC 7.

In 2020, both the Up Your Alley Fair and Folsom were canceled as a result of the COVID-19 pandemic.

This year, the San Francisco Department of Public Health was on-site to inform the local community about the viral disease and to keep them safe by adding hand sanitizing stations.

The festival was also more spread out than usual so people could freely roam around.

‘I think probably more risky things in both Outside Lands and Dore Alley will be the things that happen after the event or around the private event spaces, where people are intimate with each other,’ UCSF infectious disease specialist Dr. Peter Chin-Hong told NBC Bay Area. 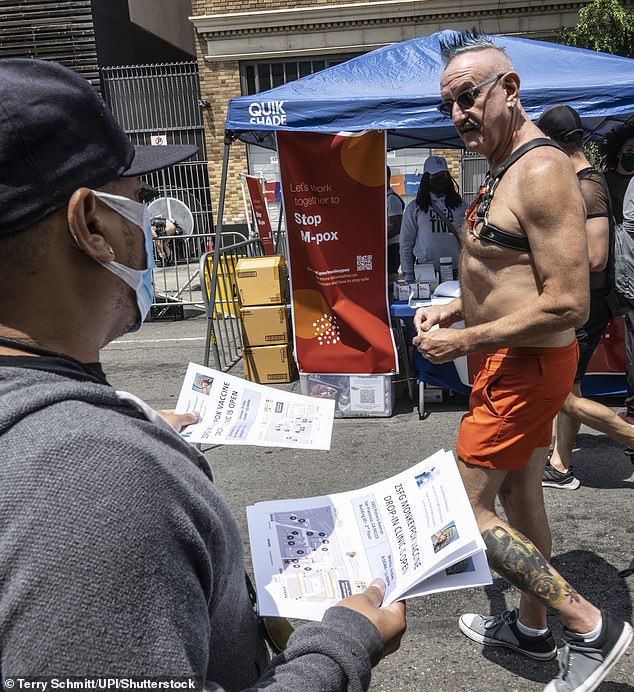 With a growing monkeypox outbreak that has so far predominately affected gay and bisexual men, city officials in San Francisco have declared a state of emergency. Pictured: a volunteer handing out informational sheets on the viral disease at the ‘Dore Alley’ festival in San Francisco on Sunday 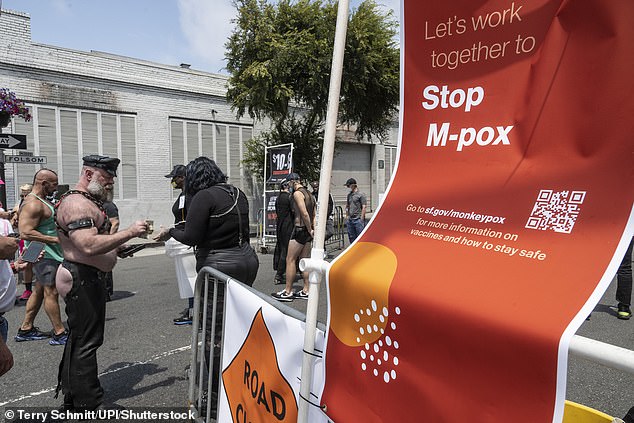 A volunteer working at the ‘Dore Alley’ festival on Sunday checks a festivalgoer’s COVID vaccine status, sideways to a flying promoting monkeypox awareness 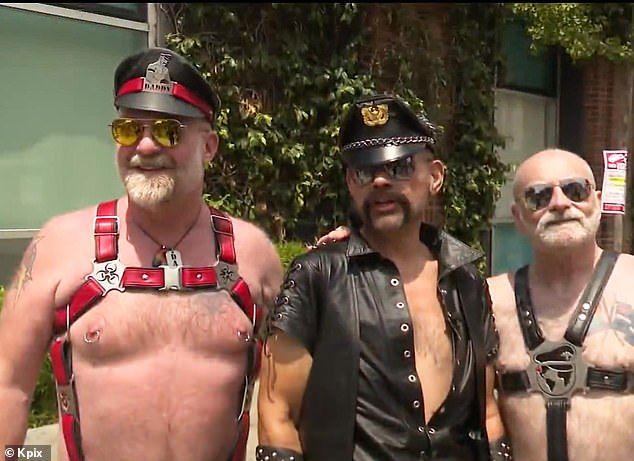 Festivalgoers (pictured) were more spread out than usual at the ‘Dore Alley’ festival on Sunday compared to other years. In 2020, the venue was canceled due to COVID

The monkeypox virus spreads through prolonged and close skin-to-skin contact, which can include hugging, cuddling and kissing, as well as through the sharing of bedding, towels and clothing. People getting sick so far have mainly been men who have sex with men, though health officials note that the virus can infect anyone.

‘Public health officials are clear: stigma is unacceptable and counterproductive in public health response,’ Michelle Gibbons, executive director of the County Health Executives Association of California said. ‘The fact is that monkeypox is primarily spread by skin-to-skin contact and sharing objects like bedding or towels, without regard to sexual orientation or gender identity.’

The type of monkeypox virus identified in this outbreak is rarely fatal and people usually recover within weeks. But the lesions and blisters caused by the virus are painful and can prevent swallowing or bowel movements if in the throat or anus.

The declaration in California came after a similar one in New York state on Saturday, and in San Francisco on Thursday. Newsom’s administration had said as recently as Friday that it was too soon for such a declaration.

After pressing for Newsom to make such a declaration, State Sen. Scott Wiener (D-SF) hailed the governor’s decision.

‘The monkeypox outbreak is an emergency, and we need to use every tool we have to control it,’ Wiener said. 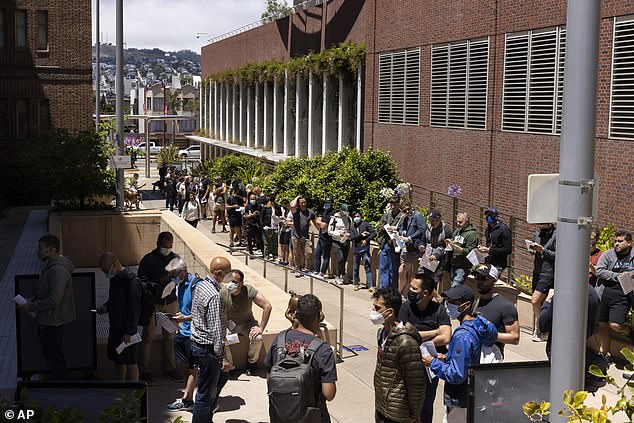 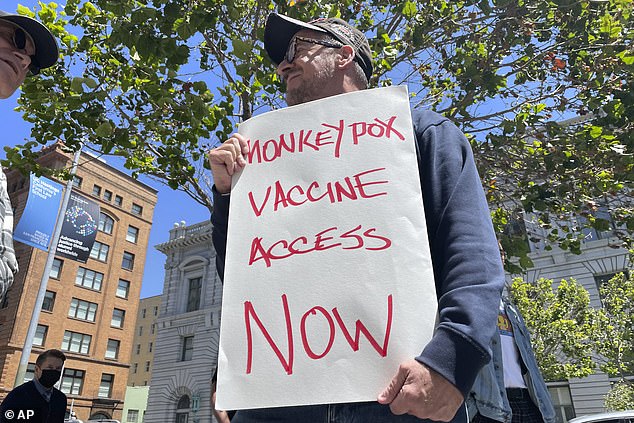 A man holds a sign urging increased access to the monkeypox vaccine during a protest in San Francisco, July 18

That’s similar to a recent law that allows pharmacists to administer vaccines, Newsom’s administration said. It said the state’s response is building on the steps developed during the coronavirus pandemic to set up vaccination clinics and make sure there is outreach to vulnerable populations in cooperation with local and community-based organizations.

California has received more than 61,000 vaccine doses and has distributed more than 25,000 doses.

‘We don’t have any time to waste,’ Los Angeles County Supervisor Kathryn Barger said in a statement. She said the nation’s most-populous county must use all available resources to speed the distribution of vaccines and help to those who have been infected.

As of last week, the state had expanded its testing capacity to process more than 1,000 tests a week. Critics have said the long wait for test results delayed treatment options.

New York City is home to one of the United States largest LGBT communities, and is in line to receive 110,000 doses of the federal governments 800,000 upcoming monkeypox vaccines – but Governor Kathy Hochul still wants more.

Case counts in New York City, the current US epicenter of the outbreak, surpassed 1,400 on Friday. In the entire country, the total amount of cases surpasses 5,000.