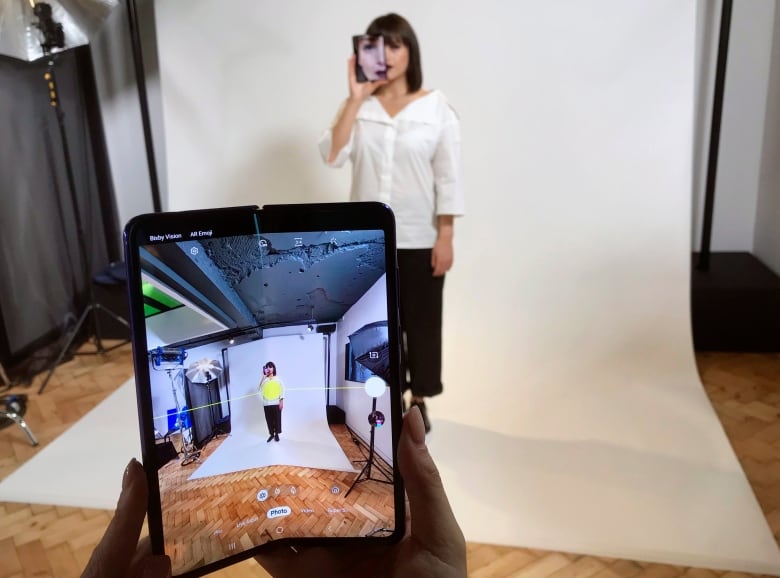 A model holds a Samsung Galaxy Fold smartphone to her face during a media preview event on April 16 in London. The launch of the phone has been delayed after reports of the screens breaking on reviewers’ phones. (Kelvin Chan/The Associated Press)

Samsung is pushing back this week’s planned public launch of its highly anticipated, $2,000 US folding phone after reports that reviewers’ phones were breaking.

The company had been planning to release the Galaxy Fold on Friday, but instead it will now run more tests and announce a new launch date in the “coming weeks.”

The delay is a setback for Samsung and for the smartphone market generally, which had been pinning some hopes on the folding phone to catalyze innovation in the industry.

The Galaxy Fold, with its $1,980 US (about $2,653 Cdn) price tag, was not intended to be a mass market hit, but many hoped it would hint at a new wave of smartphone advances — an area that has been lagging in recent years.

But device reviewers quickly found issue with the Galaxy Fold, which is about the size of an average smartphone when folded, and the size of a small tablet when its two sides are pulled apart.

Several journalists reported the inside screens flickering, freezing and finally dying on their test units within the first couple days. Two reviewers mistakenly removed an outer plastic layer that was meant to stay on and reported scratches on the screen afterward.

Samsung confirmed last week that the layer was meant to stay on. But that didn’t explain why many reviewers saw the phone’s inside screens break. 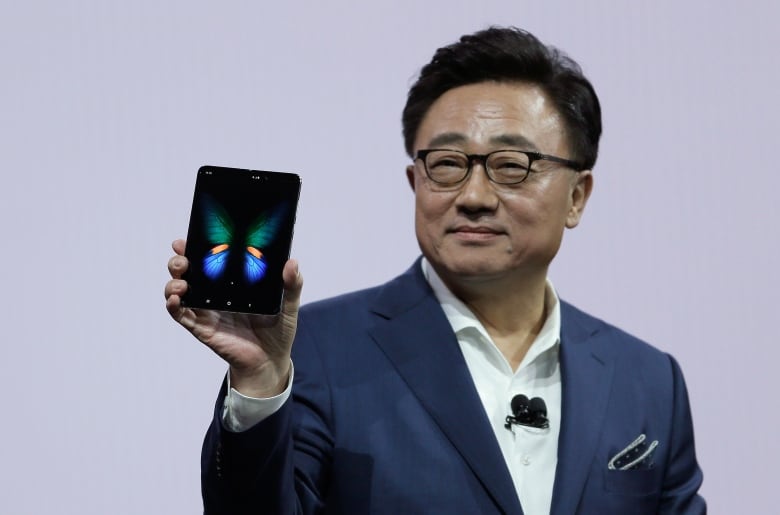 DJ Koh, Samsung President and CEO of IT and Mobile Communications, holds the Galaxy Fold at an event in February. It’s about the size of an average smartphone when folded, and the size of a small tablet when its two sides are pulled apart. (Eric Risberg/Associated Press)

An early inspection showed there could be issues when pressure is put on the exposed areas of the hinges that open and close the phone, Samsung said in a statement announcing the launch delay Monday. It also found an issue where “substances found inside the device affected the display performance.”

Samsung said it will to find ways to better protect the screens and explain to people that the outside protective layer must stay on.

Other test phones seemed to still be working well, and so far holding up to the Samsung pledge that the phone can be unfolded about 200,000 times in its life.

The Canadian price tag for the Galaxy Fold has not yet been announced by Samsung Canada, though pre-registration for the phone is now open through their website.