‘Oh now you want to talk,’ muttered Hugo Lloris under his breath as he declined interview requests in the aftermath of England’s heartbreaking defeat to France in the World Cup.

It has since transpired Lloris took umbrage at assertions made ahead of the quarter-final that he was a weak link for France.

He’d have enjoyed that moment; who doesn’t like having the last laugh?

Fast forward five weeks and he is facing similar accusations back at Tottenham.

Life comes at you quickly; unfortunately for Lloris, the joke was on him here on Sunday and Arsenal were giggling at his expense.

Lloris’ predicament wasn’t helped by the fact opposite number Aaron Ramsdale was adding to his reputation as one of the best emerging goalkeepers in European football with another bulletproof display. 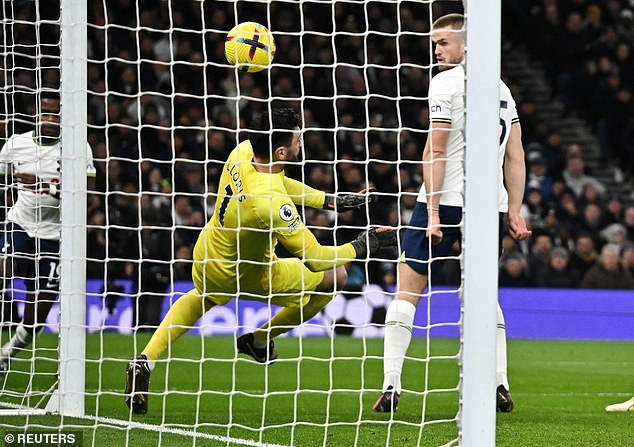 On the odd occasion that Tottenham managed to breach Arsenal, they were faced with Ramsdale in one of those moods where he wouldn’t let a mother with a double-buggy pass.

For so long there has been no realistic challenger to Jordan Pickford’s role as England’s No 1 but don’t be surprised if Ramsdale overtakes the Everton keeper for England at Euro 2024.

Ironically, Pickford is one of the names under consideration by Tottenham to eventually replace Lloris – a transfer that would bring the fight to be Gareth Southgate’s first-choice into sharper focus.

But that is all for the future. For Tottenham, Lloris’ form is a problem in the here and now.

The goalkeeper was fortunate Arsenal didn’t take an early lead after his dawdling on the ball led to him redeeming his own mistake to deny Eddie Nketiah a certain goal. 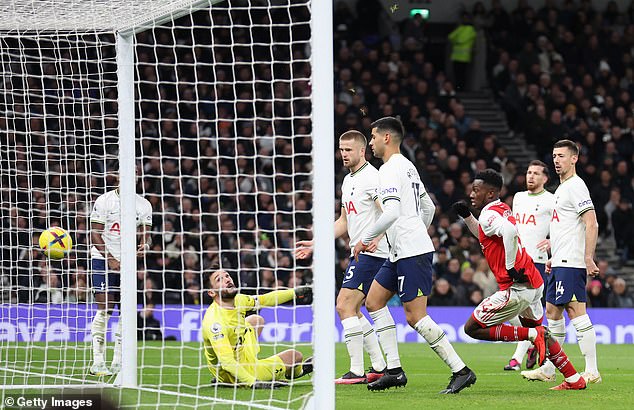 His next error, in the 14th minute, gifted Arsenal the lead. Okay, Bukayo Saka’s effort was fiercely struck and took a deflection off Ryan Sessegnon, but Lloris somehow contrived to get himself into an almighty mess – falling back to divert a cross-cum-shot into his own net.

The Tottenham Hotspur Stadium fell deafly silent for a second. Even the Arsenal supporters double-took before springing into a frenzy.

This was a blunder of epic proportions; in a fixture of gargantuan consequences.

Lloris shook his head as he rose to his feet, but there was no-one else to blame.

Is Lloris the weakest link in this Tottenham team? Probably not – but that isn’t anything to write home about.

This is a Spurs side in need of drastic repair; they have greater deficiencies than Lloris. 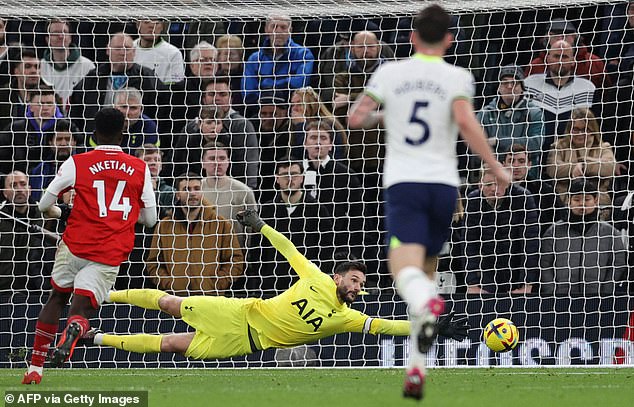 But his catalogue of errors is growing. Mistakes against Aston Villa and Newcastle led to goals and defeats, while another error-strewn display in the first North London Derby of the season saw Arsenal ease home 3-1 winners at the Emirates.

Sections of the match-going fanbase have had enough. It seems his manager Antonio Conte is reaching the end of his tether, too.

The Spurs boss was at pains to back Lloris after his latest aberration, insisting the 36-year-old remains ‘one of the best goalkeeper’s in the world.’

But the machinations behind the scenes suggest differently.

There was hope Lloris – who retired from international football last week – could see out his current contract, that expires at the end of next season, as the club’s No 1 before riding off into the sunset in his 38th year.

But the process of bringing the curtain down on Lloris’ decade long period as the club’s first-choice goalkeeper is accelerating.

Tottenham’s recruitment staff are identifying Lloris’ replacement with a view to making a signing ahead of next season. 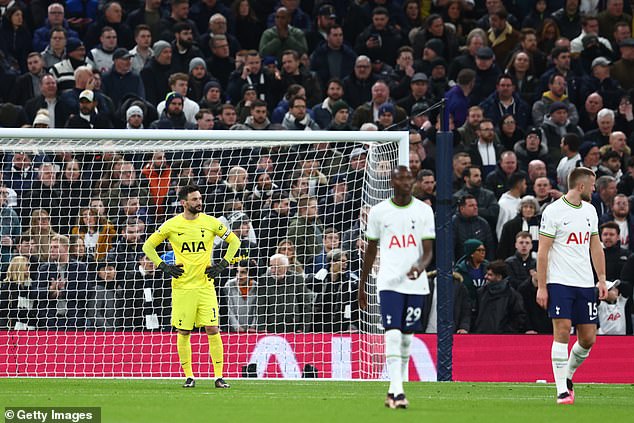 Spurs want a keeper who is comfortable in possession, one who can make rapid decisions with the ball at his feet; a trait Lloris noticeably struggles with.

Pickford has all the attributes Tottenham are looking for; indeed, if Everton are relegated that deal should be relatively straightforward to complete – though when Daniel Levy is involved it’s hard to second guess.

Brentford’s David Raya and Brighton’s Robert Sanchez – both of whom excel in possession, are also options.

During a barren era, at least in terms of trophies, Lloris’ excellence has been a constant – but all good things come to an end. For Lloris, it appears that time is approaching.