One of our foremost contemporary novelists, Ian McEwan, is fretting that recent advances in technology have had an unexpected downside: they have made it harder for novelists to write plots.

Speaking in a Q&A recently, he said that given a smartphone-addled world in which the characters ‘all know everything, as it were, and can always be in touch with each other’, ‘plots themselves have to change’.

This has happened with dizzying speed. McEwan recalled that his own first novel to feature a mobile phone was Enduring Love in 1997, when one character uses a ‘dense slab’ of a mobile to call the emergency services after a balloon accident.

‘And as I was doing this I was thinking, well they’re out in the countryside — the nearest phone box is, you know, five miles away, let’s say, and has it got any change. We’re entering a new world in which your characters can find things out on Google. In a few seconds.

McEwan, of course, is dead right. And yet, comparatively speaking, the McEwans of the world — the literary novelists — have it relatively easy.

Imagine what it’s like for the crime writers, poor things. In the golden age of the detective novel in the first half of the last century, the possibilities for deception and confusion were endless. A hat and a false moustache, a forged passport, an unusual poison, a pair of identical twins — and you were off to the races. Nowadays, it’s murder getting away with murder.

We go nowhere without scattering great clouds of DNA, our mobile phones scream out our locations to the square foot, no outdoor space is free from surveillance cameras linked to facial recognition technology, passports are almost unforgeable, moving large amounts of cash anonymously is next to impossible — and there is no poison whose symptoms are so mysterious they can’t at once be discovered with a quick Google.

Just imagine how Miss Marple’s hit rate would have gone through the roof if she had had a laptop and a broadband connnection.

No wonder we’re seeing a boom in historical crime — where the plot-devising writer is free from the twin blights of forensic science and GPS.

But it’s not just crime. The technologies of today have made some of the classics of the past impossible. In Dickens’s Oliver Twist and Bleak House — where the stories hinge on surprise discoveries about parentage — cheap commercial DNA tests and/or a bit of work on ancestry.com would have shot the author’s fox right away.

As for Sophocles’s Oedipus Rex — in which our hero unwittingly kills his father and marries his mother — fuhgeddaboutit.

One of the earliest and greatest of all novels, Samuel Richardson’s epistolary Clarissa, depends on people impersonating other people, and on letters being read, forged, intercepted, annotated and passed on.

Even if the villainous abductor and rapist Lovelace had managed to avoid the cops, a combination of location data, Google image search and end-to-end encryption would make the whole plot impossible the moment Clarissa got her hands on an iPhone.

In McEwan’s ‘new world’ of technology, Hansel And Gretel would not have ended up in the clutches of the wicked witch in the gingerbread house after the trail of breadcrumbs they left to lead them back home was eaten by birds. Google Maps would have done the trick.

And the tragic confusion at the end of Romeo And Juliet when Romeo, finding Juliet’s apparently lifeless body in her tomb, kills himself by drinking poison could have been easily averted.

He would have just checked the health app linked to Juliet’s Fitbit and — having established that her heartbeat was slow, but still there — he could have sat tight, waited for the sleeping draught to wear off, and lived happily ever after.

And nobody exchanges notes anymore: the entire plot of L. P. Hartley’s The Go-Between, in which a teenage boy passes secret romantic messages between an aristocratic beauty and her yeoman lover, would have been rendered obsolete thanks to the marvels of the mobile phone and the confidence-giving virtues of end-to-end encryption.

Joseph Conrad’s Heart Of Darkness? Why bother sending Marlow all that way up the Congo when you could just talk Mr Kurtz down the river on a company Zoom call?

And Samuel Beckett’s Waiting For Godot would have none of its existential comedy if in scene one Vladimir were able to ping Godot on ‘Share My Location’, establish that the silly sausage had got confused and thought they’d arranged to meet at the other tree, and WhatsApped him to meet at a pub halfway for a pint of lager and a scotch egg.

Levity aside, McEwan’s remarks are a mildly stated version of what seems to be a wider anxiety — that technology will, in some way, make writing novels either irrelevant or altogether impossible. 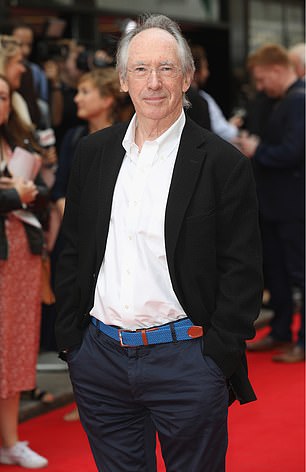 One of our foremost contemporary novelists, Ian McEwan, is fretting that recent advances in technology have had an unexpected downside: they have made it harder for novelists to write plots

Novels, the theory runs, no longer matter in the way they used to. Where once, around the apocryphal water-cooler, they talked of nothing but Ronald Firbank’s latest, now it’s all Game Of Thrones and The Queen’s Gambit.

But humans are, in a profound way, storytelling animals. And extended written narratives — aka novels — are never going to go away. There’s no better or richer way yet discovered of conveying psychological inwardness in fictional form.

What’s noticeable is not that the novel dies — but that it adapts. It finds new forms and shapes and ways of telling stories. Even as I write this, we’re seeing a new generation of novelists hyped as producing the first ‘internet novels’. Sally Rooney has become a superstar by writing novels which seemed to produce a fresh and convincing account of the life and loves of a generation that grew up online — Jane Austen for Generation Text.

A nd the likes of Olivia Laing, Patricia Lockwood, Jenny Offill and Lauren Oyler are just a few of the younger literary writers who have been trying to find ways of reproducing the jumpy and affectless experience of living half in and half out of the internet.

It was ever thus. Take Robert Harris’s thrillers for instance — the satphone on which the plot of Archangel turns was cutting-edge in its day; as was the car’s satnav that proves a giveaway to the identity of a murderer in The Ghost. Harris used high-frequency trading and artificial intelligence for his reworking of Frankenstein in The Fear Index.

And among literary landmarks it’s easy to forget that David Foster Wallace’s Infinite Jest was actually written of and about the television age — with its web-like compendiousness, its hypertext-like footnotes and digressions, and its interest in attention spans and the mental seductions of entertainment, it is a novel that helped herald the internet age.

Don DeLillo’s latest, The Silence, is deeply involved with the question of what it is to be human in the information age, and his Cosmopolis gave us a financial whizkid whose screens brought him information from ‘zeptoseconds’ into the future.

And for every crime writer who retreats into a medieval cloister or early modern London, there’ll be another who finds a way of using new tech to tell old stories. Adrian McKinty’s enjoyable recent chiller The Chain made much of the sinister anonymity of digital communication, and Gone Girl makes much of the web of digital traces we leave to lay false trails through its plot.

Why, even McEwan himself went all futuristic on us with the plot of his last full-length novel, Machines Like Me, about a menage a trois involving a robot.

Indeed, from highbrow to lowbrow, the novel is in as vigorous shape as it has ever been. You might even be reading one on your smartphone.