The one-time crypto billionaire whose $16 billion fortune has been eviscerated by the crisis at FTX.com crypto exchange once claimed to have up to $5billion to join in on Elon Musk’s deal to buy Twitter.

Sam Bankman-Fried, 30, who touted last year that his crypto company would be big enough to buy Goldman Sachs, saw the biggest one-day collapse of wealth ever among billionaires.

However, back on April 25, he reached out to Musk through his banker Michael Grimes in an attempt to get in on his now-troubled reign as ‘Chief Twit’ of the social media giant.

The texts, which were unearthed from the lawsuit that essentially forced Musk to buy Twitter, reveal Bankman-Fried as eager to get in on the action.

Grimes – no relation to the singer and mother of two of Musk’s 10 children – messages Musk, saying that he’s ‘serious about partner w/you. Same security you own.’

The one-time crypto billionaire whose $16 billion fortune has been eviscerated by the crisis at FTX.com crypto exchange once claimed to have up to $5billion to join in on Elon Musk’s deal to buy Twitter 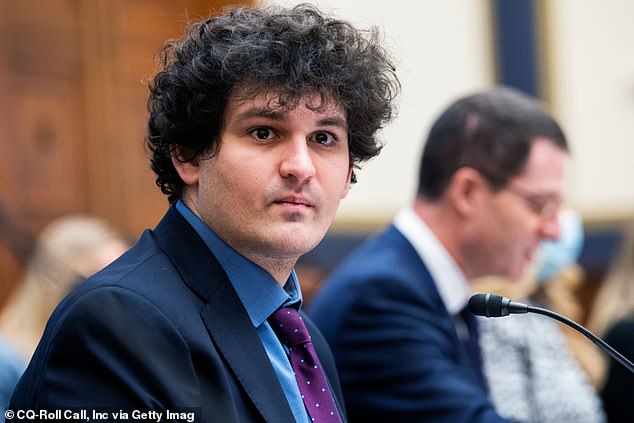 Sam Bankman-Fried, 30, who touted last year that his crypto company would be big enough to buy Goldman Sachs, saw the biggest one-day collapse of wealth ever among billionaires

The messages, which were published on Twitter by Mashable reporter Matt Binder alongside texts from the Scottish philosopher William MacAskill briefly connecting them, continue with Grimes saying Bankman-Fried would go up to $5billion in funding and wanted to engineer ‘social media blockchain integration.’

Bankman-Fried briefly connects with Musk, saying: ‘Great to meet you Elon! – happy to chat about Twitter (or other things) whenever.’

Musk, who claims to be in Germany at the time, sets up a time to chat but there are no further messages between the two.

Grimes notes in his texts with Musk that Bankman-Fried is a ‘major Democratic donor’ who ‘believes in [Musk’s] mission.’ Indeed, Bankman-Fried handed $5.2 million to President Joe Biden’s 2020 election campaign.

Musk responds: ‘Blockchain [T]witter isn’t possible, as the bandwith and latency requirements cannot be supported by a peer to peer network.’

Grimes hits back by saying: ‘Absent the blockchain piece, he’s focused on investing if you want his interest in Twitter and your mission but we can park him for now.’

The Tesla CEO hits back: ‘So long as I don’t have to have a laborious blockchain debate.’

The banker agrees, with Musk then asking if Bankman-Fried has the $3billion in liquid funds. 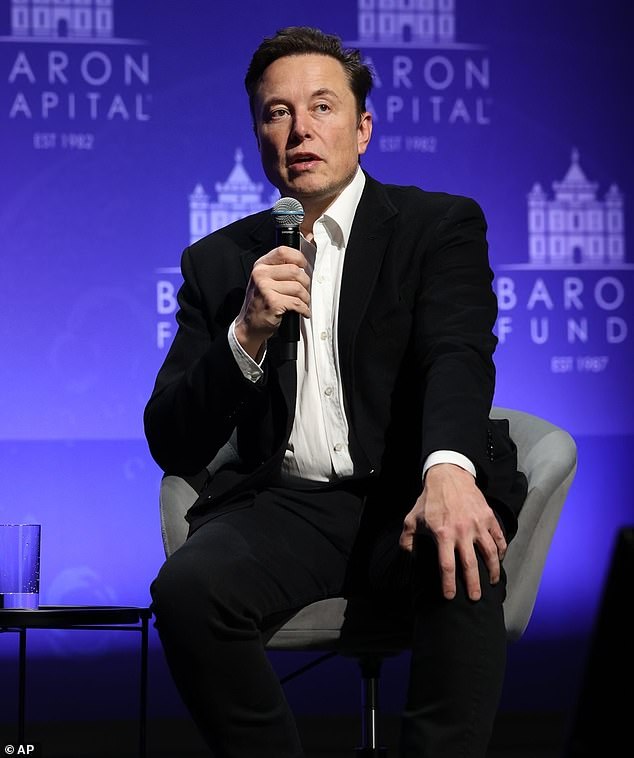 The messages, which were published on Twitter alongside texts from the Scottish philosopher William MacAskill briefly connecting the two then-billionaires, continue with Grimes saying Bankman-Fried would go up to $5billion in funding and wanted to engineer ‘social media blockchain integration.’ 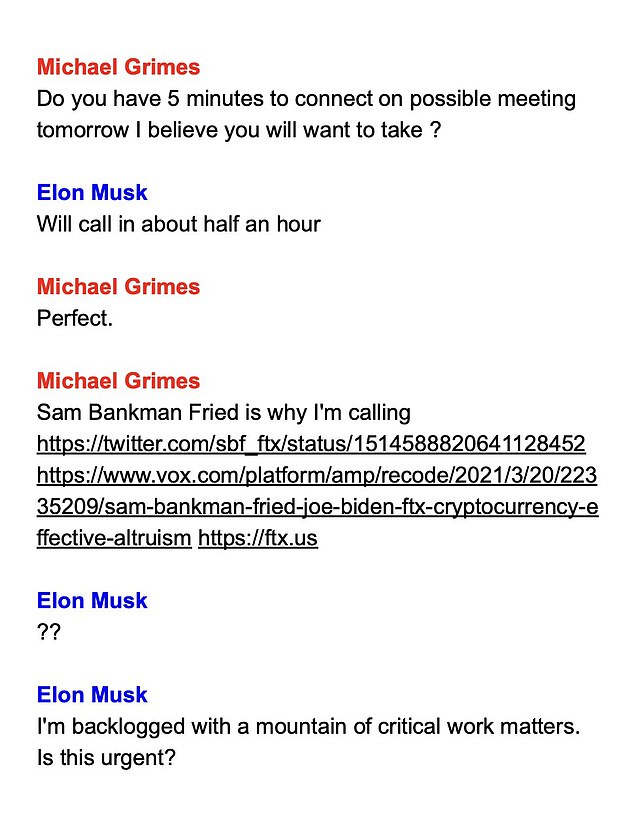 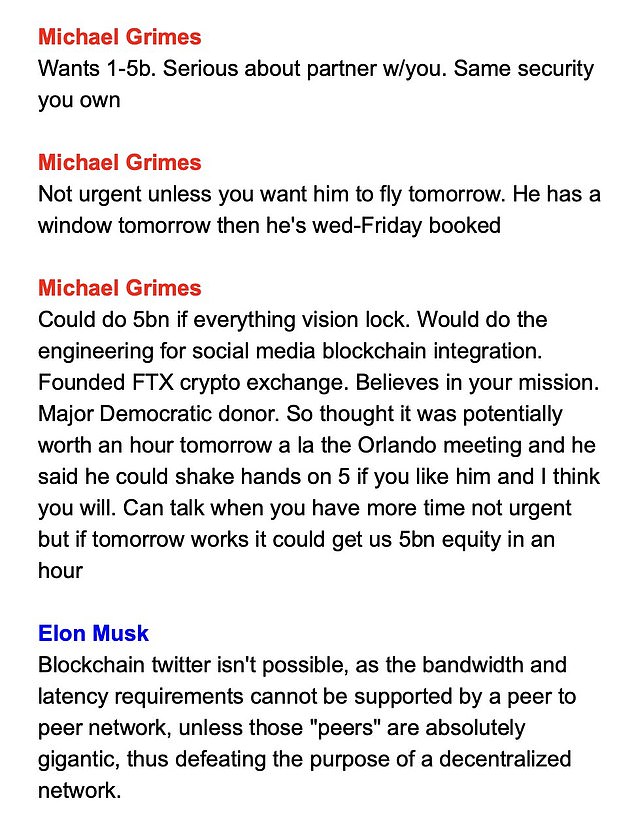 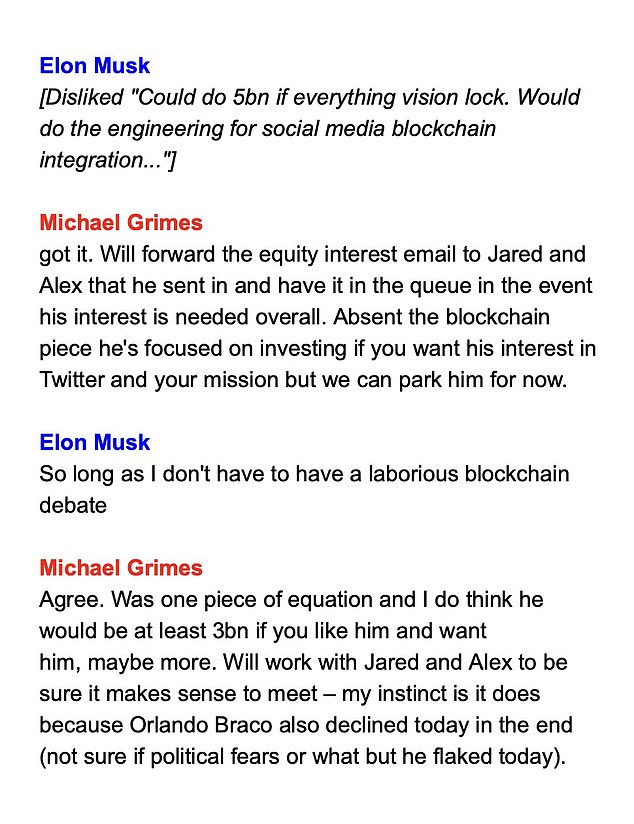 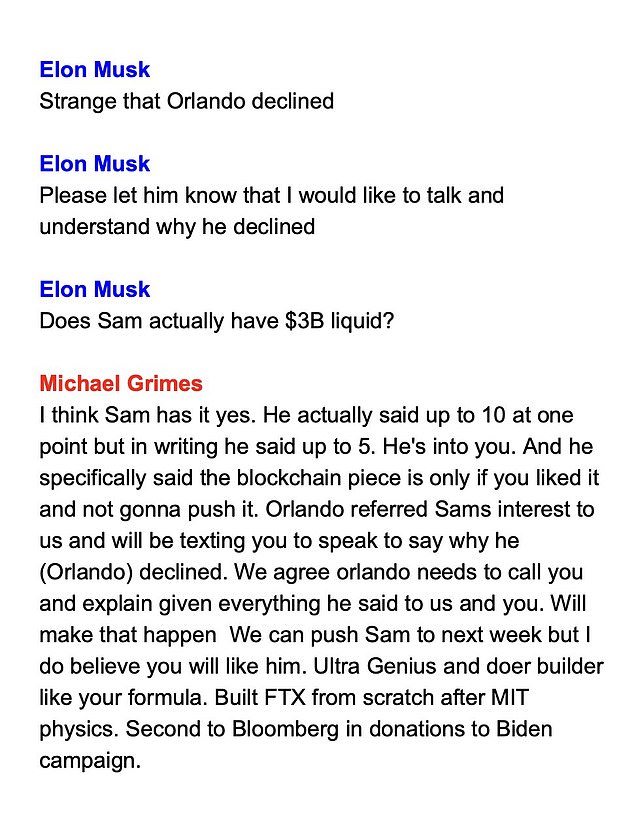 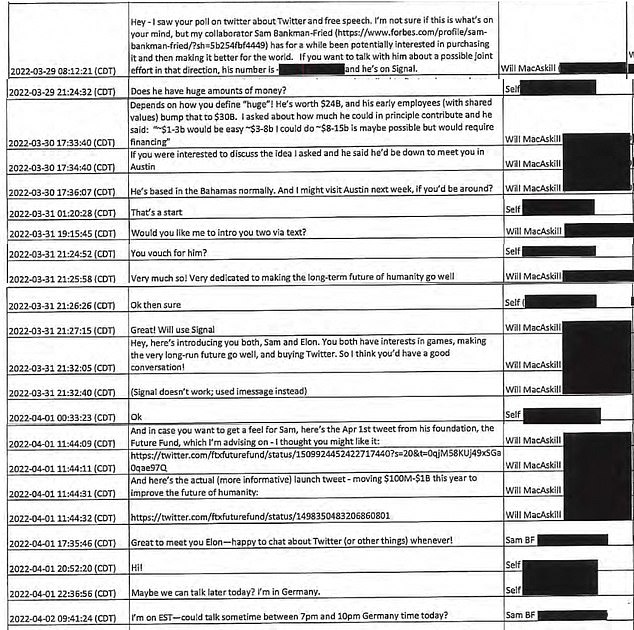 Grimes responded: ‘I think Sam has it yes. He actually said up to 10 at one point but in writing he said up to 5. He’s into you. And he specifically said the blockchain piece is only if you liked it and not gonna’ push it.’

He then once again hits the FTX.com founder as a huge Democratic fundraiser, saying he’s ‘second to Bloomberg in donations to Biden campaign.’

It doesn’t appear that Bankman-Fried and Musk ever did any business together involving Twitter.

The embattled tech mogul, whose $16 billion fortune has been eviscerated by the crisis at FTX.com crypto exchange, made the plea on Wednesday – hours before rival Binance pulled out of a takeover deal.

Bankman-Fried, 30, said on the call with investors that FTX.com needed $4billion to stay solvent, a source told Bloomberg.

He told them that he messed up and would be ‘incredibly, unbelievably grateful’ for a bailout.

The crisis at FTX is linked to a ‘liquidity crunch’ after users withdrew $6 billion in 72 hours up to Tuesday morning.

On Wednesday, after larger rival Binance walked away from a bailout deal to rescue FTX, Bitcoin touched a two-year low of $15,632, down about 77 percent from its all-time peak of $69,000 reached in November 2021.

The meltdown follows a year of intense pressure for crypto markets, as rising interest rates prompted investors to ditch risky or speculative assets. 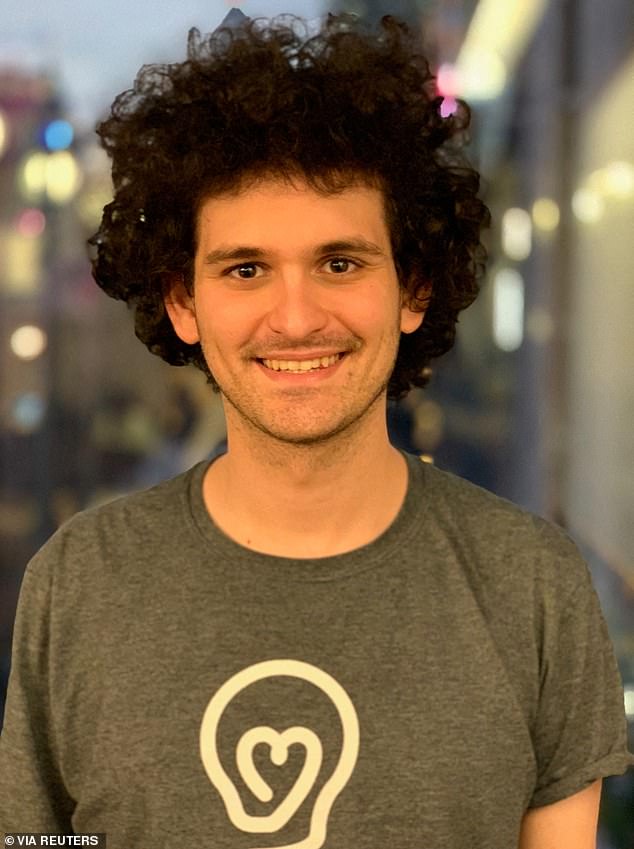 Bankman Fried, 30, was worth an estimate $16bn before the crisis but his fortune is down 94%

He also tweeted ‘I f***** up’ and ‘should have done better’ amid the ongoing crisis at FTX.com 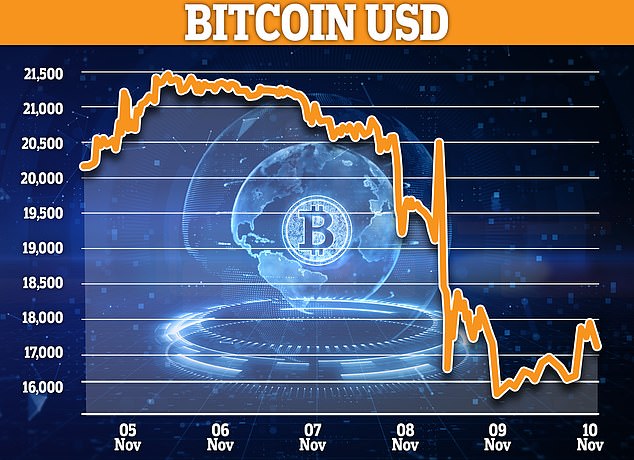 The crisis has sent crypto markets in freefall, with Bitcoin tumbling 17 percent over the turmoil

The firm hoped to avoid collapse after a shock proposal by Binance to takeover the company – but Binance pulled out after reportedly finding a ‘black hole’ in FTX’s books.

Sam Bankman-Fried, a vegan who sleeps four hours a night, had become a public face of crypto money, with a personal fortune once estimated at nearly $25 billion.

Almost always appearing with a hoodie and a dark T-shirt, Bankman-Fried has pledged to donate almost all of his fortune to his favored causes, like animal welfare and the fight against global warming.

The son of Stanford Law School professors and a graduate of the elite Massachusetts Institute of Technology (MIT), he was born on the Stanford campus and raised in California. 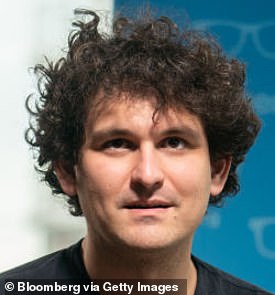 He worked as a broker on Wall Street before turning to cryptocurrencies in 2017.

Bankman-Fried moved the company to the Bahamas, where taxes are almost nonexistent, saying the Caribbean nation is ‘one of the few countries that has a comprehensive licensing regime for cryptocurrencies and cryptocurrency exchanges.’

He has been a vocal advocate for smoother access to the crypto market for the general public, particularly in the United States.

Big names including Tom Brady and his ex-wife, Gisele Bundchen, reportedly face losses after they took an equity stake in the company last year.

Sports stars Steph Curry and Naomi Osaka are also among those who had investments with the company.

FTX now faces bankruptcy and one of its early backers, Sequoia, has essentially declared the firm worthless after it marked its own investment down to $0.

In the call on Wednesday, Bankman-Fried reportedly insisted Binance was not going to pull out of the takeover – but the deal collapsed just an hour later.

Binance’s billionaire boss Changpeng ‘CZ’ Zhao said in a statement: ‘Our hope was to be able to support FTX’s customers to provide liquidity, but the issues are beyond our control or ability to help.’

Bankman-Fried issued another groveling apology on Thursday, this time to customers.

In a lengthy Twitter thread, he said: ‘I’m sorry. That’s the biggest thing. I f***** up, and should have done better.

‘I also should have been communicating more very recently.

‘Transparently–my hands were tied during the duration of the possible Binance deal; I wasn’t particularly allowed to say much publicly. But of course it’s on me that we ended up there in the first place.’

He goes on to say he ‘f***** up twice’ and that his mistakes ‘tells me a lot of things, both specifically and generally, that I was s*** at’.

Bankman-Fried said ‘this is all about FTX international’ and ‘FTX US users are fine’ – but the claim drew skepticism from some customers who claim they’ve been unable to make withdrawals.

He revealed that around $5 billion in withdrawals were requested on Sunday alone, but the company only had around 80% of that in liquidity.

He also said the priority is now ‘doing right by users’ and the company is trying to raise liquidity.

Financial regulators in the US have launched an investigation into FTX over concerns about handling of customer funds.

The crisis has caused cryptocurrency values to plunge.

The disaster at FTX marks a momentous downfall for Bankman-Fried, who said last year that his crypto company would grow large enough to buy Goldman Sachs, which is currently valued at nearly $130 billion.

The CEO lost 94 percent of his fortune on Tuesday – the biggest one-day collapse ever among billionaires.

His 53% stake in FTX was previously worth $6.2 billion and another $7.4 billion of his fortune came from, Alameda Research, his crypto trading firm. 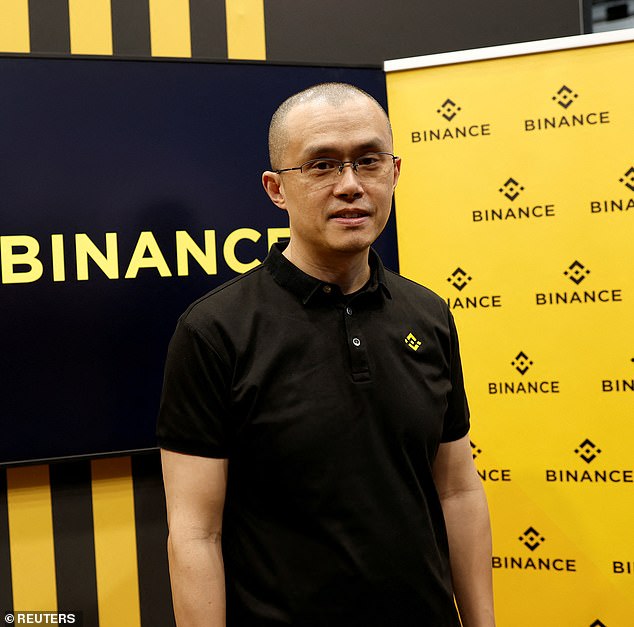 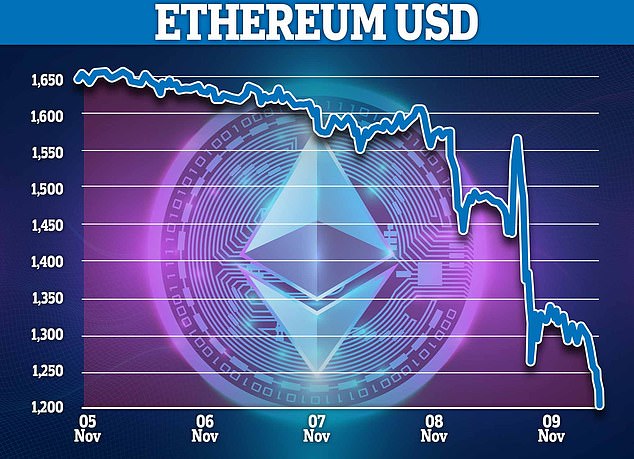 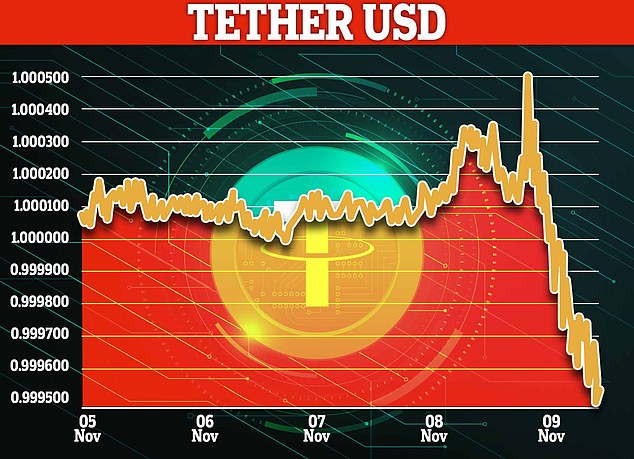 The crisis at FTX has shaken the crypto markets and caused coins like Ethereum and Bitcoin to plunge in value. Charts show they suffered rapid dips as details of FTX’s problems emerged

The Wall Street Journal reported on Thursday that FTX lent billions of dollars of client assets to Alameda to fund risky trades.

A source told the WSJ that Bankman-Friend informed investors that Alameda owes FTX about $10 billion.

Experts called the shock collapse of FTX another ‘alarm warning’ for the battered cryptocurrency market and said investors should be cautious for a while.

‘This is another black eye for the industry,’ said David Holt, a cryptocurrency industry expert at CFRA.

Adding to its regulatory concerns, most of FTX’s legal and compliance staff quit Tuesday evening, according to a report from news outlet Semafor citing people familiar with the matter.