EXPRESS INFORMER > Health & Medicine > Salmonella can be living on your spice container!

Salmonella can be living on your spice container! Study finds that small bottles can be overlooked sources of contamination

Germs that cause diseases like salmonella could be hiding on your spice container.

Researchers at Rutgers University, in New Brunswick, New Jersey, found that spice containers are by far the kitchen item most likely to be contaminated after cooking.

In an experiment, nearly half of spice containers were found to be contaminated after a person had used them while cooking.

The believe this is because many will take care to clean dishes and utensils – they may neglect to wash their spice containers after they are done.

These containers can easily become contaminated after a person touches chicken, turkey, or another contaminated good before grabbing it to be used.

The Centers for Disease Control and Prevention (CDC) estimates there are 1.35million Salmonella infections in the US each year – including 420 deaths.

Nearly half of spice containers, 48 per cent, were found to be contaminated after a person was finished cooking. This was by far the most of any item used. 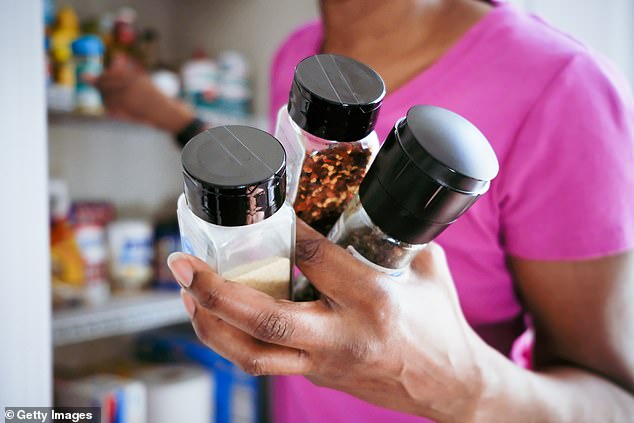 A person may neglect to clean their spice containers after cooking, instead washing only utensils and other dishes (file photo)

Salmonella is a type of bacterial infection often described simply as ‘food poisoning’.

Salmonella bacteria live in the gut of farm animals and is shed through their stool.

Most people become infected by consuming food or water that has been contaminated by feces.

It is most common in raw meat, poultry, seafood and eggs because the cooking process kills off the bugs.

Faeces may get onto raw meat and poultry during the butchering process, while seafood may be contaminated if harvested from contaminated water.

Contamination can also happen when food is prepared by people who don’t wash their hands thoroughly after using the toilet, changing a nappy or  handling contaminated food themselves.

Most people develop the above symptoms within eight to 72 hours after exposure and recover within a few days to a week.

Doctors advise taking in lots of fluids, such as water or squash, to avoid dehydration.

Life-threatening complications also may develop if the infection spreads beyond the intestines.

About one in 2,500 people who get salmonella die from the infection.

When to see a doctor:

Researchers published their findings last week in the Journal of Food Protection.

They gathered 317 adults to cook an identical turkey burger meal in kitchens of varying sizes.

Some used a small apartment-size space while others had a large industrial kitchen to work with.

Participants were not informed that their kitchen space would later be tested for contamination.

The ground turkey used for the meal was inoculated before hand to contain a chemical that would act similarly to salmonella would when contaminating an area.

Kitchens were swabbed afterwards to test for the presence of the salmonella stand-in.

Far and away, the object with the most prevalent contamination was the spice containers. Nearly half, 48 per cent, of them were found to have the substance.

Just over 20 per cent of soap dispensers were found to be contaminated. No other object was contaminated in more than one-in-five simulations.

Dr Donald Schaffner, a professor at Rutgers that co-authored the study, explained that many at-home chefs may forget to wipe down the containers after use.

‘In addition to more obvious surfaces like cutting boards, garbage can lids and refrigerator handles, here’s something else that you need to pay attention to when you’re trying to be clean and sanitary in your kitchen,’ he said in a statement.

Our research shows that any spice container you touch when you’re preparing raw meat might get cross-contaminated.

‘You’ll want to be conscious of that during or after meal preparation.’

Salmonella is among the most common foodborne illnesses. The bacterial infection is often transmitted via poultry.

While not every poultry product is carrying the bacteria, it is frequent enough that experts warn against undercooking fowl meat.

When cooked properly, the bacteria on meat will be killed.

The CDC reports 1.35 million cases per year, though many are either mild or asymptomatic.

More than 25,000 are serious enough to require hospitalization and the bacterial infection is responsible for 420 deaths annually.