Saga is in discussions regarding the sale of its underwriting business Acromas Insurance, as the over-50s insurer attempts to tackle its £721million debt pile.

The group told investors on Monday the sale is ‘consistent’ with its turnaround strategy, and would ‘crystallise value and enhance long-term returns for shareholders’.

Acromas, which underwrites an estimated 25-to-30 per cent of Saga’s insurance business, is based in Gibraltar and guarantees a variety of personal lines policies for companies including Saga Services and AA Insurance Services.

Saga launched a turnaround plan in 2019, which aimed to create ‘a refreshed, contemporary and confident brand with a data and digital-led approach to improving our customers’ experiences’.

The plan has had mixed results with the group, which also operates a travel business including cruises, forced to lower profit expectations in September blaming the spiralling cost of insurance claims.

It said in a statement on Monday: ‘Saga’s operational and strategic position in the insurance market, in line with the evolution to a capital-light business model and the stated objective to reduce debt.

‘It has concluded that a potential disposal of its underwriting business is consistent with group strategy and would crystallise value and enhance long-term returns for shareholders.’

Saga added there is no guarantee an offer to buy Acroma will be made, but it will update investors in due course.

Saga shares were up 3.5 per cent to 155.7p on Monday morning. They have lost roughly 41 and 90.2 per cent of their value over one and five years, respectively. 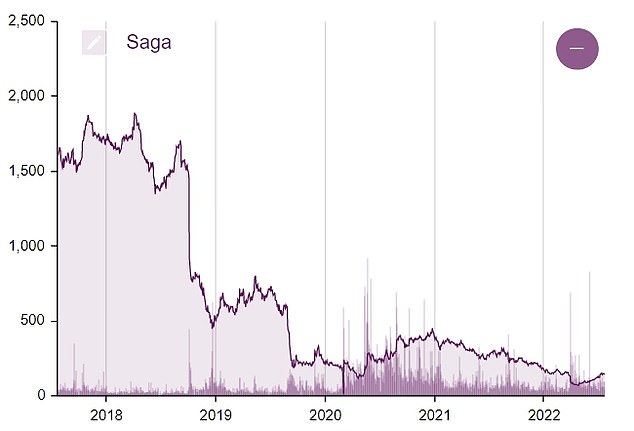