Last week we had to stay two metres apart. Now it’s one metre. Are they making it up as they go along?

The two-metre distancing rule was always an educated guess, given that the virus is new so the data available was limited.

The UK was relatively strict in its distancing rules, compared with other countries.

France, Italy and Singapore opted for one metre distancing, while Germany recommended 1.5 metres.

The further away you are from an infected person, the less likely you are to breathe in contaminated droplets expelled from someone talking or coughing – the main method of transmission. This is simply because the viral particles fall to the ground before they reach you.

The two-metre distancing rule was always an educated guess, according to DR ELLIE CANNON

The British Government was, according to some experts, being over cautious by implementing a two-metre rule because of the rapidly growing infection rate in March and April.

However, there is growing evidence to suggest that most viral particles travel only a couple of feet before falling to the ground.

And, given the probability of coming into contact with an infected person is now so low, the Government has decided it is safe to reduce the rule to one metre for those in England from July 4.

In Northern Ireland, the new, one-metre guidance is effective from tomorrow. Scotland and Wales are considering it.

But the one-metre rule is only safe if other mitigating measures are also implemented – such as frequent hand washing, covering your mouth when you cough and wearing face masks on public transport.

The latest guidance says that if we take these steps, the risks at one metre apart will be no greater than at two metres apart.

Just what are the rules about meeting other people now? It seems to change endlessly.

Currently in England, only people living alone and single parents with children under 18 can visit another household and stay overnight – or vice versa.

These so-called ‘support bubbles’ were introduced earlier this month to help those struggling with loneliness during lockdown.

That’s about to change in England. From next Saturday, one household can invite another household to visit and even stay the night indoors – regardless of how many people are in each household.

But the indoor gathering must only involve two households.

But the rules vary across the UK.

Scotland is sticking with support bubbles – allowing people who live alone (or single parents with children under 18) to meet indoors with one other household. Outdoors, Scotland allows three households to meet – up to a maximum of eight people.

If pubs can open, why can’t gyms?

There are two key differences between pubs and restaurants – allowed to open on July 4 – and gyms, which will remain shut. 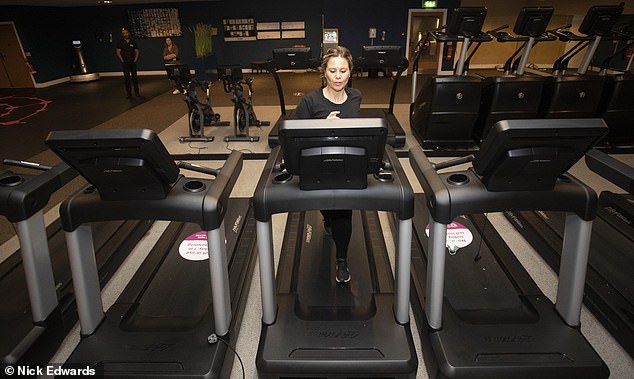 Pubs and restaurants can reopen on July 4 but gyms, pictured, will have to remain closed

Firstly, while gyms and pubs might both involve people being in close proximity to one another, pubs allow for protective measures to keep them apart – such as partitions between tables, back-to-back seating and table service.

Secondly, with gyms there is concern over viral particles potentially being spread via shared equipment and changing room facilities – a situation that does not occur in pubs. Swimming pools, spas and bowling alleys are also staying shut for now for the same reason.

The Government is currently exploring ways to open these venues again.

Outdoor gyms can be used from next Saturday. They are already open in Northern Ireland and will be in Scotland from tomorrow. Wales has no immediate plans to follow suit.

Am I safe from the virus when out at the beach?

With the virus still in circulation, it is impossible to guarantee that anyone, anywhere in the UK, is safe from infection.

But studies show that being outdoors dramatically reduces your risk, because droplets sent into the air by an infected person get rapidly dispersed by even the slightest breeze.

Research from Japan found that only 12.5 per cent of Covid-19 patients had passed the virus to others by socialising outdoors.

Other studies show that, in roughly 75 per cent of cases, the virus is spread indoors.

However, on Friday, the UK’s Chief Medical Officer, Professor Chris Whitty warned that over-crowding on beaches could spark a rise in cases, after swarms of revellers flocked to Bournemouth in Dorset. 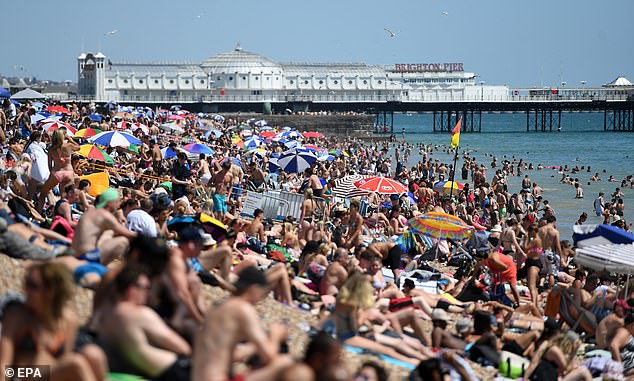 While studies show that being outdoors dramatically reduces your risk, there have also been warnings that over-crowding on beaches, as was seen this week, pictured, could spark a rise in cases

Professor Keith Neal, an expert in infectious disease at Nottingham University, says: ‘It’s unlikely the virus will be spread on the beach – even if it’s slightly crowded.

‘However, the risk will increase significantly if people sit right next to each other, share towels and utensils, and drink alcohol. You’re more likely to abandon social distancing rules if inebriated.’

Prof Neal advises choosing a quiet beach, using your own towel and staying one metre apart from those not in your household.

‘And if you lie on your back or front, any infectious particles expelled from the nose or mouth will either fall to the ground in front of you, or be carried away by the air, rather than hitting another person in the face,’ he adds.

Does air conditioning increase the risk of catching the virus?

Probably not. Fears were raised early in the pandemic after one study blamed a small outbreak in China on a restaurant’s air con – which the researchers suggested caused the spread.

However, the European Centre for Disease Prevention and Control says that if air-conditioning units are well-maintained they will filter out coronavirus droplets from the atmosphere, stopping them from circulating.

According to Government guidance, the risk of air conditioning spreading coronavirus is ‘extremely low’.