Ryder Cup legend Lee Westwood is in need of one last hurrah! The 48-year-old has more points than Seve and has played in as many matches as Faldo – but career is in danger of ending in a whimper

By Mike Keegan For The Mail On Sunday

At Whistling Straits one of the great Ryder Cup careers faces the prospect of fading out with a whimper.

Lee Westwood deserves a sterling send-off. The office equivalent of a pub packed with admiring workmates, the drinks flowing from a free bar, a giant kebab and a taxi home.

As things stand, however, it looks more like it will end up being a couple of blokes from accounts nursing half a lager in an otherwise-empty tap room, lamenting how things are not like they used to be.

Lee Westwood. 48, is the oldest man to qualify since it became Europe v the United States

The facts are the facts. Westwood is a Ryder Cup legend. He has won more points than Seve Ballesteros and has now played in as many matches than Nick Faldo, the man he partnered in his first outing 24 years ago. On Sunday he will overtake him.

His presence in Wisconsin, following a remarkable resurrection at the age of 48, is in itself a tremendous achievement. He is the oldest man to qualify since it became Europe v the United States.

But he may well have felt every one of those years when his own, errant tee shot as much as ended he and Matt Fitzpatrick’s tussle with Xander Schauffele and Patrick Cantlay. It added more misery to another painful session for the visitors and it presented another fact – he has now not won in five Ryder Cup matches in a row.

This is increasingly looking like a limp to what many believe will be the finish line – at least as a Europe player – with the upcoming singles appearance set to be the last stop of a journey that has provided so many great moments for the continent’s golf. 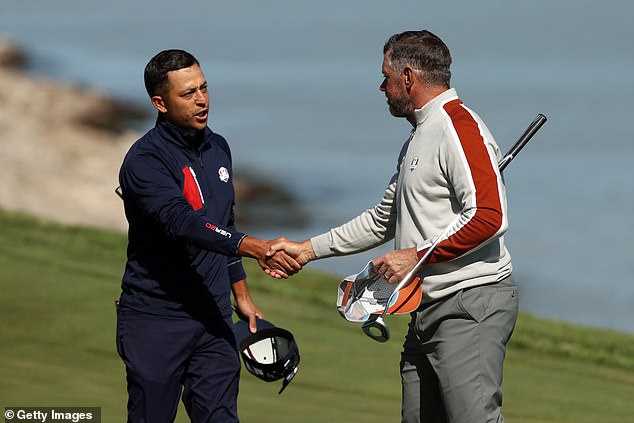 Harrington, keeping the faith, will have wanted more. But on the heels of Friday’s 2&1 loss to Brooks Koepka and Daniel Berger came another deserved defeat.

Aside from a magnificent half on the fourth and a sensational long-range effort at the 16th, the putts failed to drop for the Worksopian in what is becoming a depressingly familiar picture for both he and the Irishman’s strugglers.

For a time, it had looked trend-buckingly good. At the sixth, the English duo were one up. But by the 11th, following a surge from their fired-up opponents, they were three down. The sun had shone mainly on the Californians. The damage was done.

As he trudged off to the loud roars of the by-now intoxicated crowd, Westwood may have been left to reflect on a lack of respect for the elders. Certainly, none was shown here, and not only by those chugging down cans. At the sixth, the rookies asked him to hole out, with estimates placing the ball around 18 inches away from cup. It whipped the crowd up – nothing they like more than a show of unnecessary aggression – to the extent that the American players then had to appeal for calm. 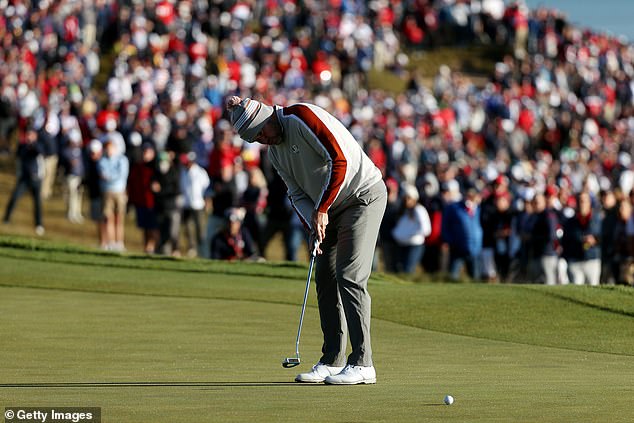 However, Westwood’s career is at risk of ending in a whimper and he needs one last hurrah 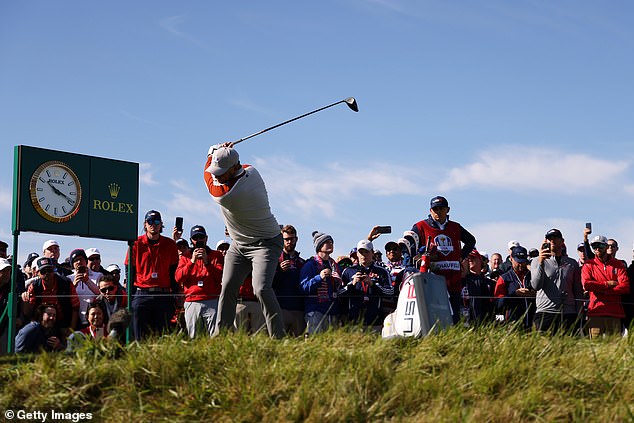 It may have been water off the duck’s back. Westwood has seen it and heard it all before and there was more of the usual nonsense on display. On Friday, he was loudly asked if he ‘had the yips again’. After his first tee shot yesterday, some classless moron shouted ‘in the bunker’. Another intellectually-challenged individual – presumably well into the $14 cans of Stella – was at it on the 13th, sniggering loudly for effect when Westwood missed a birdie putt. They are the kind of moments which prompted one fed-up European caddie to earlier say loudly ‘shut the f*** up’.

With two years to a half century, you would imagine it would take more to put Westwood off his game than that. He has rammed those cries down obnoxious throats before, it just now feels like it was quite a while ago. It would be nice if he could repeat the trick for one last time this afternoon.

Westwood is likely to get more opportunities, regardless. He has, more than once, thrown his hat into the ring to be Europe’s captain in Rome in two years. Many believe the role is his. But he says that, despite having hit the half century by the time the 44th instalment comes around, his mind is not yet made up. ’Stranger things have happened,’ he said earlier in the week, when asked if he thought he could qualify again.

For now, however, all eyes are on Sunday’s outing. Admittedly, it would be crass to call it salvation in the singles. There have been plenty of successful moments since 1997. One more, however, would provide the end he deserves.