A recreational vehicle parked on the streets of Seattle with a makeshift plywood shanty built on top is infuriating neighbors, as the city struggles with an epidemic of homelessness.

Residents of the Ballard neighborhood first noticed construction of the rustic second story last week, and fear that it could topple on a passing car or a pedestrian, according to KOMO-TV.

‘It’s called a shack,’ a female living inside the classic Winnebago F-17 explained to the outlet, declining to answer further questions.

Residents of the affluent neighborhood, which is filled with upscale bars and boutique shops, say their streets are now lined with RVs and tent encampments, and blame city leaders for failing to address the issue.

‘We feel like they have more rights than us. I mean to go up on our house (to add a story) we would have to have several permits,’ neighbor Lane Imbler-Bremner.

Imbler-Bremner said that he had reported the makeshift double-decker to City Hall, but has so far received no response.

Complicating matters, city officials seem perplexed about who has oversight authority, and what ordinances the haphazard construction might be violating.

‘To my knowledge, I have never seen anything like this,’ a spokesman for the city’s Department of Transportation admitted.

There are an estimated 2,700 people living in cars and RVs in Seattle, and last month the Washington state Supreme Court effectively banned towing vehicles that are used as residences.

The Seattle Times editorial board recently called the city’s approach to dealing with people sleeping in vehicles ‘a singular failure.’ 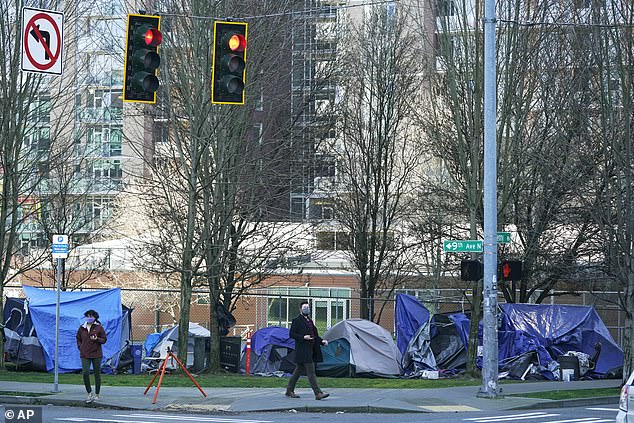 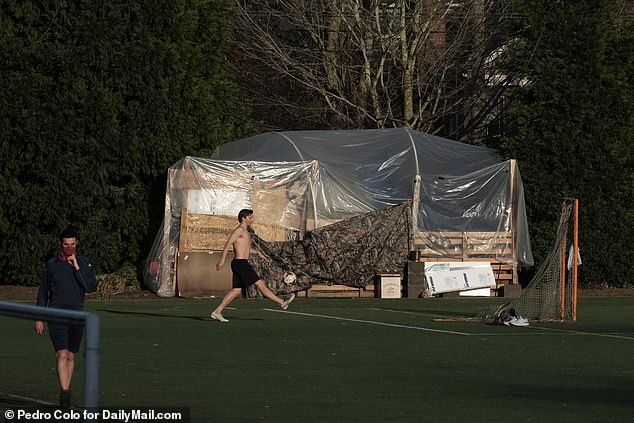 Some business owners have resorted to blocking off street parking with large boulders, drawing threats of fines and citations from city officials.

In Ballard, residents say that RVs now line both sides of the streets, now parked with impunity in the knowledge that they cannot be towed.

The makeshift double-decker is behind Reuben’s Brew and Fremont Brewing Company, a high-traffic area surrounded by several residential streets.

‘I want the city to go to them and say they have to take it down,’ business owner Elise Vincentini told KOMO.

She said she feared that the lax enforcement could embolden other RV owners in the area to build similar structures.

‘I mean honestly, is it going to take that thing falling over then we do something?’ she asked.

Seattle has more than 11,700 homeless people, the third largest homeless population in the nation and second only to New York City and Los Angeles.

Meanwhile, the city is struggling with an increase in violent crime and dire shortage of police officers following mass resignations from the force. 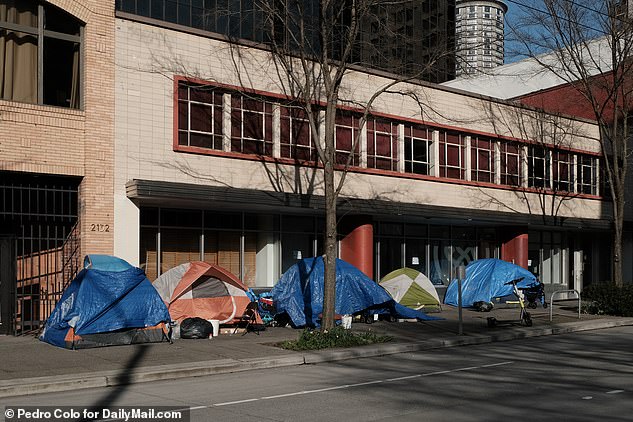 Washington State saw a rise in homelessness of six per cent in 2020. Pictured, Homeless encampments in Downtown Seattle area 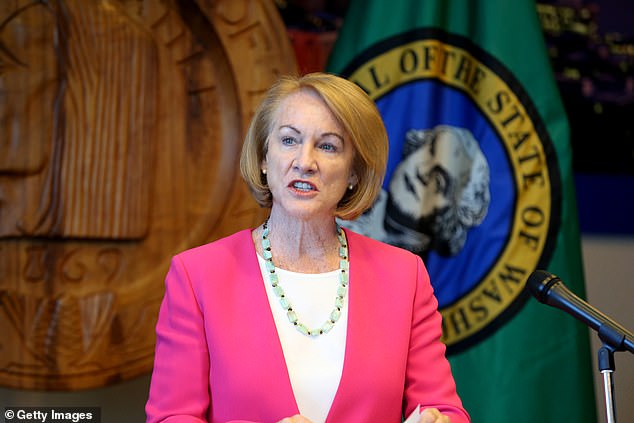 Seattle Mayor Jenny Durkan is seen above. The city is struggling with an increase in violent crime and dire shortage of police officers following mass resignations from the force

So far this year, there have been 31 murders in the city, putting Seattle on pace to again exceed 2019 levels.

The Seattle Police Department is still reeling from a 17 percent budget cut following a push to defund the police last year, and nearly 300 cops have quit since the start of 2020.

Democrat Mayor Jenny Durkan addressed the crisis at a July 28 press conference saying: ‘As a city, we cannot continue on this current trajectory of losing police officers.

‘Over the past 17 months, the Seattle Police Department has lost 250 police officers which is the equivalent of over 300,000 service hours. We’re on path to losing 300 police officers.’

Last week, Durkan announced that all Seattle police officers would be required to get vaccines for COVID-19, a mandate that led to fears of more resignations.

Roughly 20 percent of the department’s 1,080 deployable officers have not yet been vaccinated, according to department data.