Ruth Bader Ginsburg’s Harvard lawyer granddaughter has revealed she dictated the Supreme Court Justice’s dying wish on her computer and says her grandmother had no regrets about not stepping down so Barack Obama could have appointed a replacement.

Clara Spera also said in an interview with BBC’s Newshour on Monday that her grandmother tried to keep politics out of the Supreme Court and that she didn’t realize until it was too late that the nomination process would become as ‘fraught as it had under President Trump’.

During the interview, Spera – who called her grandmother Bubbie – opened up for the first time about the circumstances surrounding Ginsburg’s final wish that she shouldn’t be replaced until after a ‘new president is installed’.

‘In the final days of her life, I asked my grandmother if there was anything she wanted to say to the public, to anyone that wasn’t already out there,’ Spera said.

‘I pulled out my computer and she dictated the following sentence to me. She said: ‘My most fervent wish is that I will not be replaced until a new president is installed’.

‘I read it back to it and she was very happy with it. When I asked ‘is that it, is there anything else you’d like to say?’. She said ‘the rest of my work is a matter of public record’. So that’s all she wanted to add.’

Spera’s comments were published the same day Trump cast doubt on Ginsburg’s final wish by alleging that it could have been written by a Democrat.

It marks the first time Spera has publicly spoken about Ginsburg’s comments, which initially only came to light after being quoted in an obituary written by one of Ginsburg’s friends, National Public Radio’s Nina Totenberg.

Elsewhere in the interview, Spera was asked if Ginsburg had any regrets about not stepping down earlier so President Barack Obama could have appointed his pick for a Supreme Court Justice. 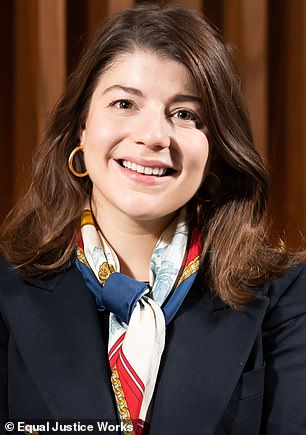 Clara Spera, who is a Harvard Law graduate who affectionately called her grandmother ‘Bubbie’, said on Monday that Ginsburg tried to keep politics out of the Supreme Court

‘She never expressed that regret to me. My grandmother fundamentally was someone who believed in the institutions that she served and the fundamental institutions of American governance – the senate, the house, the presidency,’ Spera said.

‘For her, keeping politics out of the Supreme Court was a very important thing. She was confirmed by the Senate 96-3 and one of her biggest boosters at the time was a very Republican senator Orrin Hatch.

‘She never imagined, until it was far too late, that the Supreme Court nomination and confirmation process would have become as fraught as it had under President Trump.

‘I don’t think she had regret because she didn’t step down I believe, in part, because of her faith in these institutions.’

‘I don’t know that she said that, or was that written out by Adam Schiff, Schumer and Pelosi,’ Trump told Fox News’ Fox & Friends.

‘I would be more inclined to the second, it sounds so beautiful. But that sounds like a Schumer deal or maybe a Pelosi or shifty Schiff. So that that came out of the wind. Let’s see. I mean, maybe she did and maybe she didn’t.’ 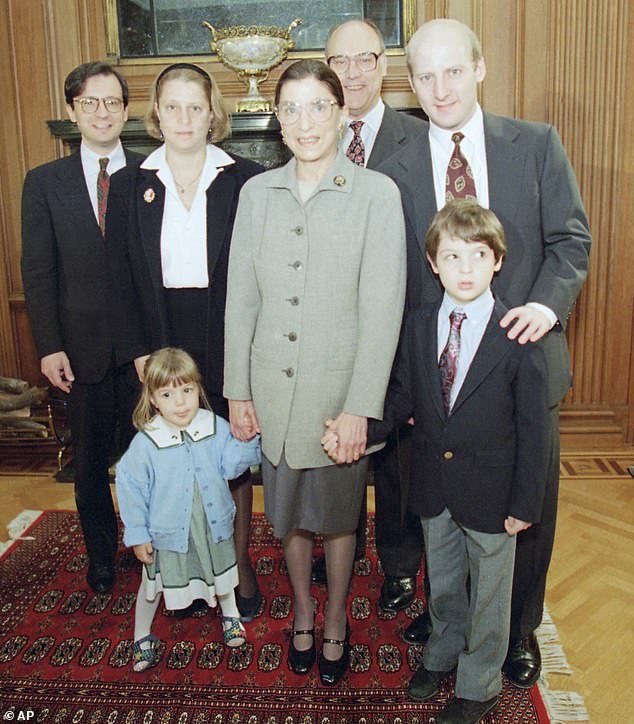 Clara is one of Ginsburg’s four grandchildren. Like her grandmother, Clara’s parents are also both lawyers. Pictured above with Ginsburg (from left to right) is her son-in-law George Spera, daughter Jane Ginsburg, husband Martin and son James Ginsburg. Clara and her brother Paul are pictured at the front 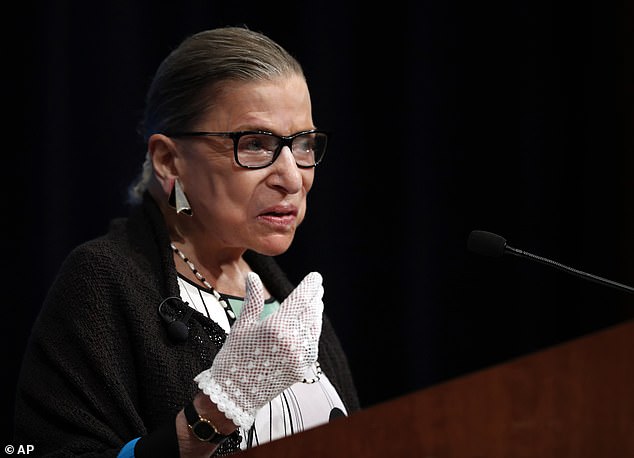 Spera followed in the footsteps of her grandmother in becoming a lawyer. In the interview, the Harvard Law graduate spoke of how she gained a new appreciation for her grandmother when she attended law school

Spera followed in the footsteps of her grandmother in becoming a lawyer. Both of her parents, Jane Ginsburg and George T. Spera, are also lawyers.

In the BBC interview, the Harvard Law graduate spoke of how she gained a new appreciation for her grandmother when she attended law school.

‘She was the person I turned to again and again long before I went to law school because before being a role model or a legal star she was my grandmother,’ she said.

‘I gained a new appreciation for her as a lawyer when I was in law school. I will admit if I ever had questions… I was incredibly privileged she was just an email away.’

Spera studied arts at the University of Chicago and philosophy at Cambridge University in the UK before graduating from Harvard Law in 2017.

She worked as a legal intern for Hillary for America ahead of the 2016 election and as a law clerk in the US Court of Appeals.

Spera is currently an Equal Justice Works Fellow at the American Civil Liberties Union where she is involved in a project to expand access to reproductive care for lower income women, according to her LinkedIn page.

She married her actor husband Rory Boyd in 2018 after the pair met studying at Cambridge University.

Spera, whose brother Paul is also an actor, is one of Ginsburg’s four grandchildren.

In a 2018 op-ed with Glamour after she was sworn in as a lawyer in New York, Spera revealed that she called her grandmother Bubbie.

She said no one had ‘guided and inspired me more than my grandmother’.

‘You may know her as Justice Ruth Bader Ginsburg, or affectionately as the Notorious RBG, but to me she’s Bubbie. Bubbie with whom I spend most High Holy Days. Bubbie who took me to see The Book of Mormon, where we both laughed until we cried. Bubbie who loves going to the movies. Bubbie at whom I get a kick out of poking fun. Just a Bubbie like any other,’ Spera wrote.

She also detailed having her third birthday party at the Supreme Court.

‘One of my earliest memories is from when I celebrated my third birthday at the Supreme Court, just two short months after Bubbie took her oath,’ she said.

‘I realize now that my birthday party wasn’t held there to show off or because the Court’s such an impressive space; it was because she wanted me to know, from the age of three, that my grandmother, my ­Bubbie, worked there, and that I shouldn’t consider anything out of my reach.’