An Italian smoothie: Rustic alpine charm, thirsty playboys and miles of off-piste action give Courmayeur the edge for retro skiing

By Mark Palmer for the Daily Mail

You go up the mountain in the morning and you go up again at night. That’s the growing trend in this small Italian ski town with a worldwide reputation, but a resort which has struggled in recent years to compete with the big boys.

The evening ascent undoubtedly offers something different, with the cable car going back and forth until midnight and skidoos lining up at the top like taxis ready to whisk you off to various restaurants from where you look down at the twinkling lights of the Aosta Valley and up at the canopy of twinkling stars.

It’s not the only thing that sets Courmayeur apart. The whole experience has a retro feel to it. Courmayeur is to skiers what vinyl is to music lovers.

Courmayeur, a small Italian ski town, which sits at the bottom of Mont Blanc. There’s no ski-in-ski-out convenience, no chalet companies and no self-catering apartment blocks

There’s no ski-in-ski-out convenience; no chalet companies; no self-catering apartment blocks and hardly enough pisted runs to keep an intermediate happy for a full week.

Instead, there is access to miles upon miles of off-piste terrain, including the spectacular 20-mile Vallee Blanche that spits you out in Chamonix; a mountaineering tradition that goes back centuries, an unspoilt car-free town centre with creaking wood-panelled bars (one of which, Caffe della Posta, has a 15th-century inglenook fireplace thought to be the oldest in Italy) and oodles of ‘coccolare’.

Coccolare translates as ‘to cuddle’, but that hardly does it justice. It manifests itself in unexpected kindnesses such as turning up at the wonderfully bohemian Maison Vieille up the mountain on Saturday night (where dancing on the bar and tables is encouraged) and being plied with drinks just because you have a friend in common with the playboy owner.

Or receiving a gift of a bottle of rare Bordiga vermouth from the owner of La Bouche bar simply on the grounds that my ski pal Richard and I expressed an obsessive interest in the history of negronis. Or falling in deep snow and being rescued by a stranger who had to walk more than 30 metres up hill to disentangle me.

Or being given a 50 per cent discount on a white cotton shirt by a former snowboarding champion who now runs a boutique because, she says, ‘it’s good to chat’.

There’s plenty of ‘coccolare’ on display at Hotel Le Massif, which is wonderfully positioned practically across the street from the cable car. 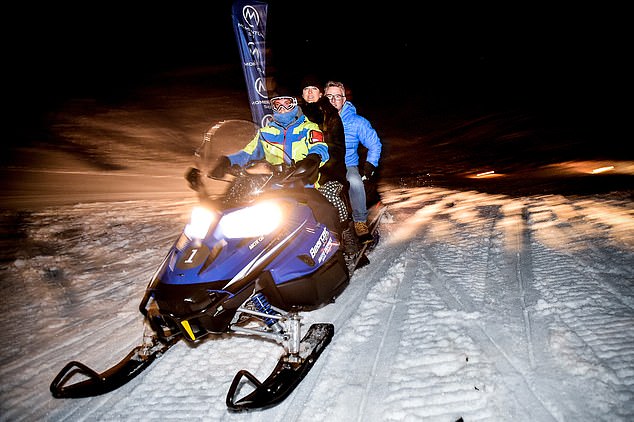 Moonlight ride: Skiiers in Courmayeur can visit a restaurant by taking a ride in a snowmobile

This cleverly designed hotel only opened at the end of 2018 and some people think it’s just what Courmayeur needs: modern, swanky bar, two restaurants and a spa with friendly staff who know how to revive weary bodies.

Most rooms have balconies, with fabulous views of Mont Blanc — although the summit is obscured because Courmayeur is practically underneath it.

We’re here for a weekend, hoping to ski the Vallee Blanche. But the weather is against us. Instead, our guide takes us into the forest where the snow comes up to our waists and I start thinking about Giles Whittell’s absorbing book, Snow: The Biography, which will change your attitude to the white stuff forever more.

‘No two snowflakes since the dawn of snow can possibly have formed from identical crystals and taken exactly the same path to earth,’ he writes. 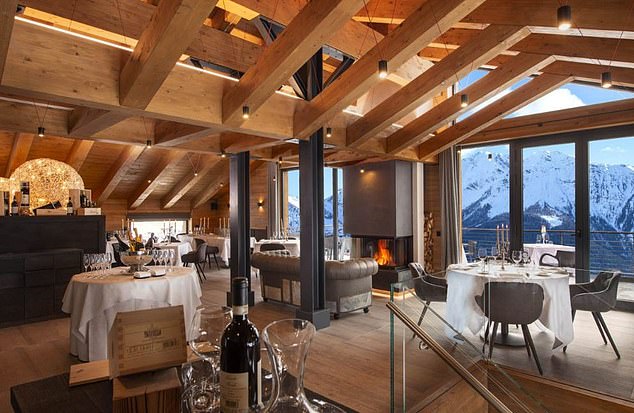 Hotel Le Massif, pictured, which is wonderfully positioned practically across the street from the cable car

We’re on extra-wide skis to cope with conditions, but I still can’t master it.

Annoyingly, Richard floats effortlessly over the snow. But I come into my own when we adjourn for lunch back at the Maison Vieille, where the playboy owner Giacomo brims with bonhomie and insists that we participate in a curious friendship ritual, which involves passing around a ‘grole’ (clay pot) filled with grappa, coffee and heaven knows what.

There are four spouts from which to drink and the idea is that you can’t put the pot down until the liquid is completely finished. It goes without saying that our descent back to the cable car is, well, I don’t recall much about it. But what remains is the glowing charm of Courmayeur, a resort at the other end of the purpose-built spectrum and one I hope will persist for many decades.

The Mountain Gourmet Ski Experience with Tom Kerridge will take place in Courmayeur Mont Blanc from March 12 to 15, 2020.