If abandoned ghost villages are your thing, this Russian republic does a nice line in them.

Nestled in the heart of Dagestan in southwestern Russia are several ancient settlements that have been completely deserted, with residents having fled to bigger towns and cities in search of better opportunities.

One of the most impressive is the village of Gamsutl, which is perched 4,600 feet up (1,400m) on top of Mount Gamsutlmeer and nicknamed the ‘Machu Picchu of Dagestan’.

Gamsutl dates back around 2,000 years and is perched 4,600 feet up on top of Mount Gamsutlmeer 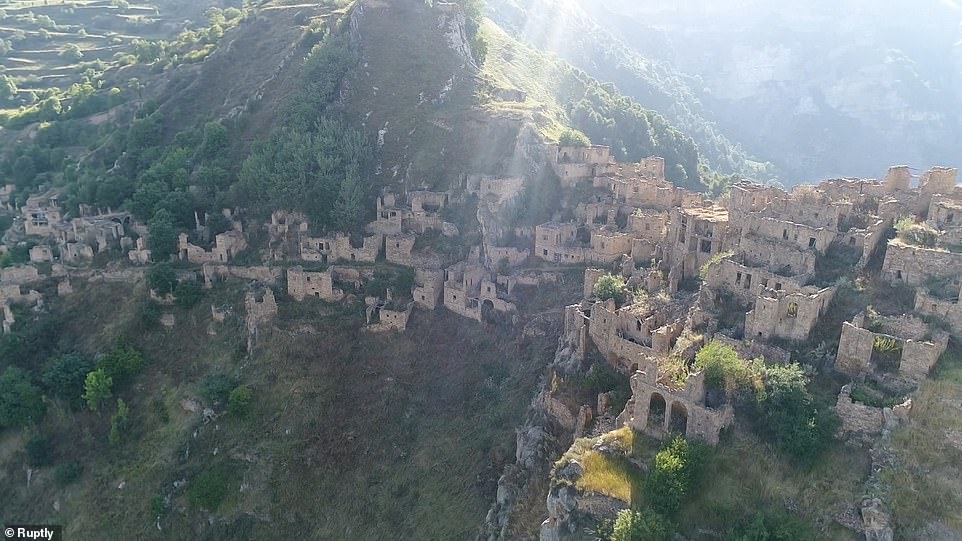 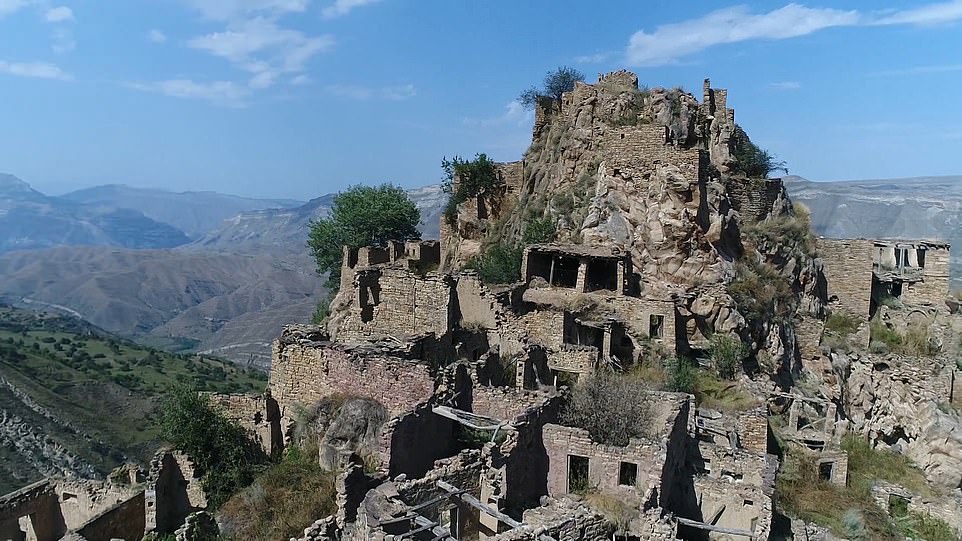 Smith said: ‘There were very few tourists at Gamsutl, and I have to say it was one of the nicest places I visited in the mountainous region’ 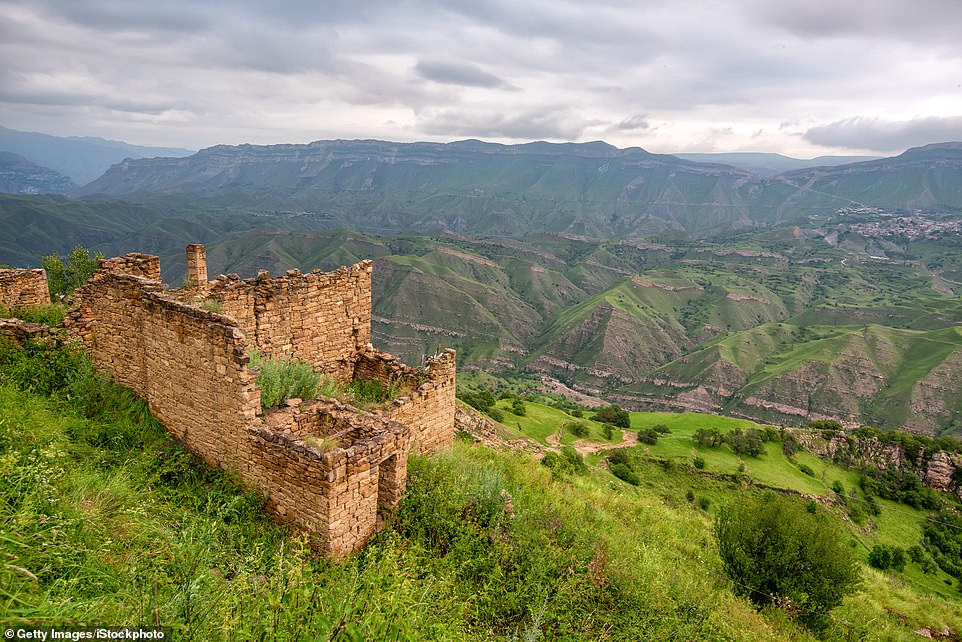 Namesake: The village of Gamsutl is nicknamed the ‘Machu Picchu of Dagestan’ 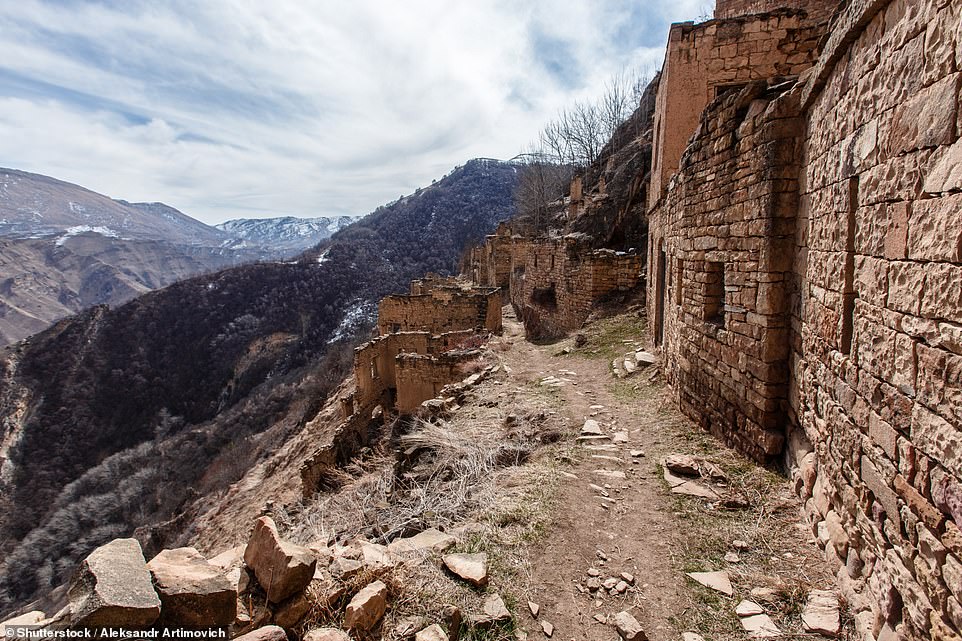 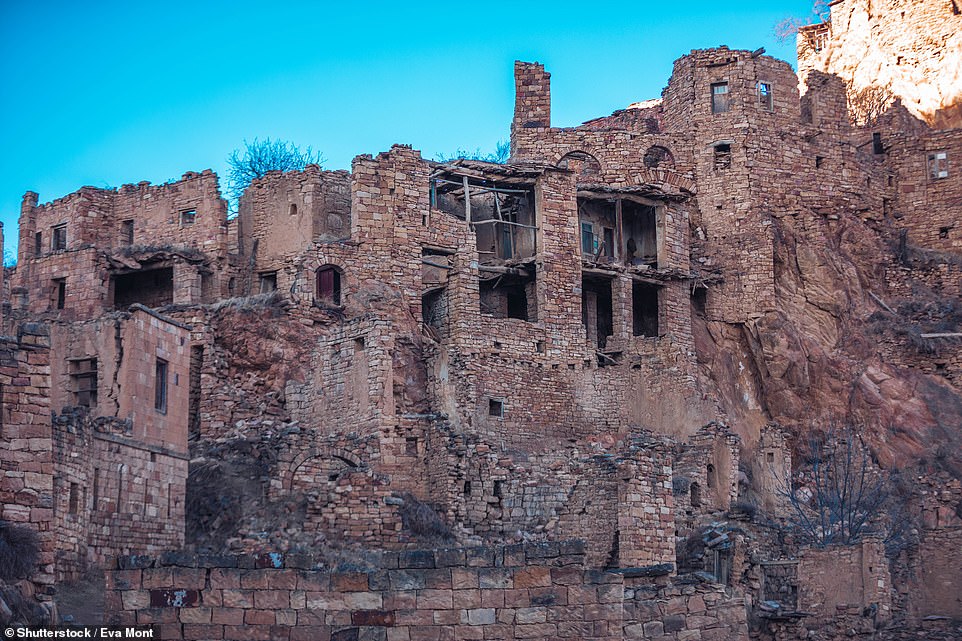 Today, it is possible to reach the village via an hour-long climb along a narrow path 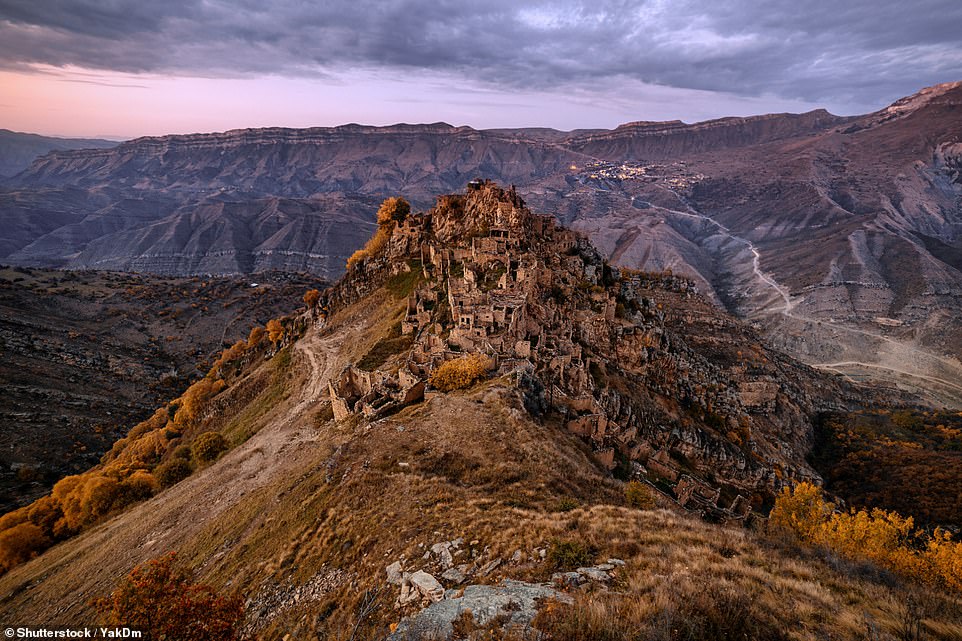 There were once around 300 occupied dwellings in Gamsutl. The last resident died in 2015

The village is believed to date back 2,000 years and grew around the fortress of a local ruler, who placed it on the mountain for tactical reasons.

According to the Russia Travel Blog, the population of Gamsutl grew over the centuries and ‘life was seething here even in the 20th century’.

Along with around 300 dwellings, ‘there were shops, a school, a post office, a hospital and even a maternity hospital’.

However, in the late 1950s more and more people began to leave the village in search of a better life in larger towns or villages. The last resident died in 2015.

Today, it is possible to reach the village via an hour-long climb along a narrow path.

London-based Melanie Smith, who visited Gamsutl in May 2019 and wrote about it on her blog Only My Footprints, told MailOnline Travel that she would liken the site to a ‘small but well-formed version of Machu Picchu in Peru, which it earns its nickname from’. 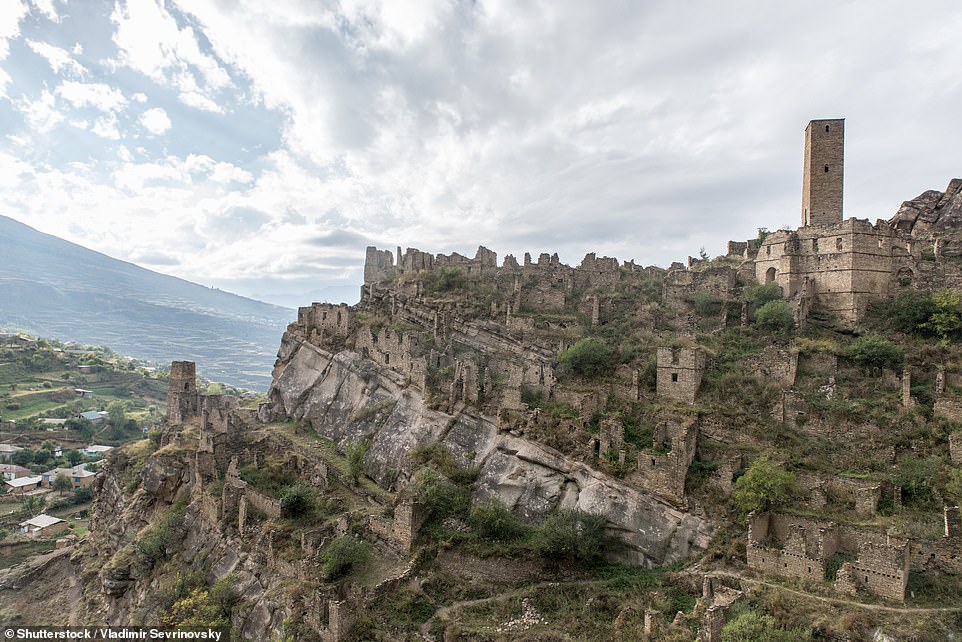 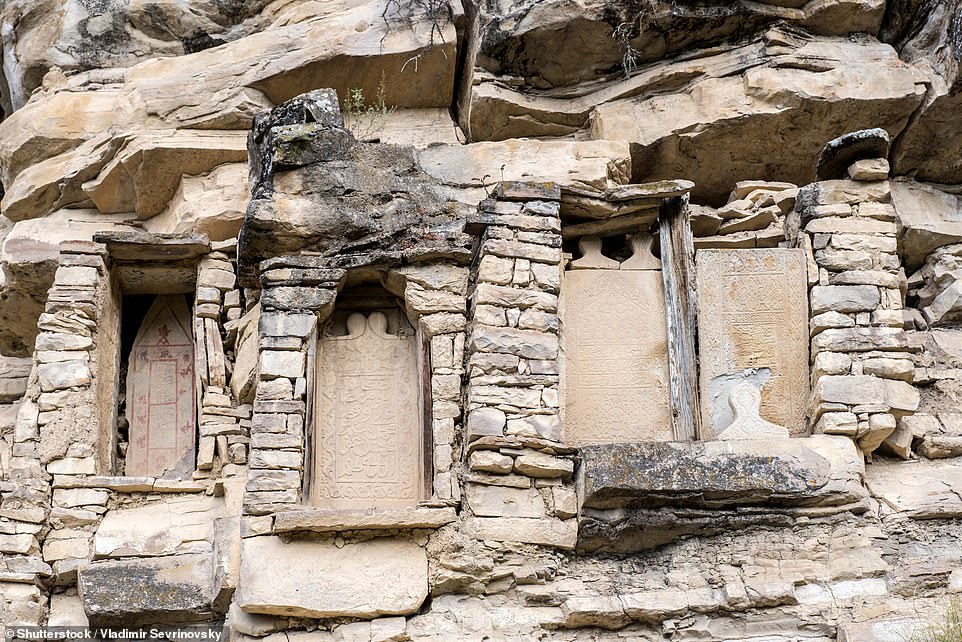 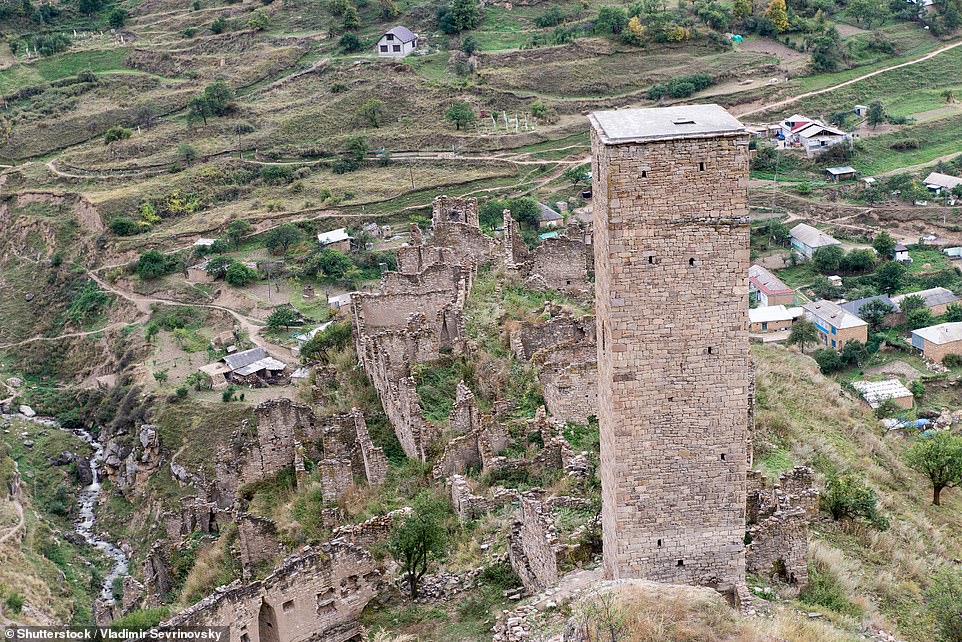 Ghostly presence: The grassy ruins of Kakhib loom above more modern dwellings below 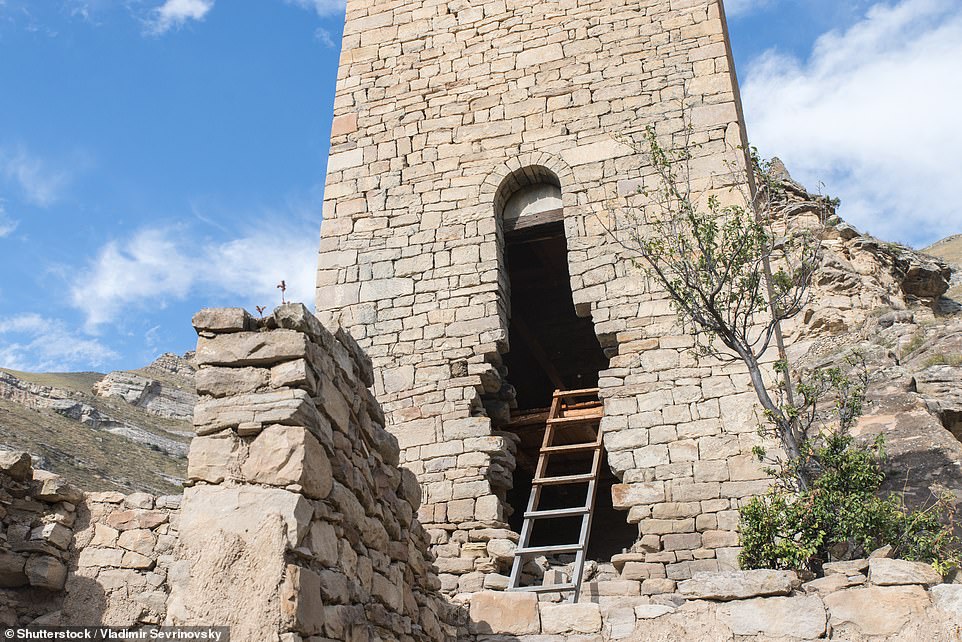 She added: ‘Unlike Machu Picchu, there were very few tourists at Gamsutl, and I have to say it was one of the nicest places I visited in the mountainous region.’

The avid traveller also ventured to the abandoned village of Kakhib during her road trip through Dagestan. It is located around a two-hour drive from Gamsutl.

She said the drive involved ‘winding up and down sheer mountains and the scenery was a mix of Utah, Arizona, New Zealand and Morocco’.

There is little information available about Kakhib, but Smith detailed it following her visit, writing: ‘It is a stunning abandoned village that appears to be utterly disguised in the cliffside.

‘The rock houses and watchtowers are well camouflaged and my photos don’t do it justice.

‘Our guide had never actually walked through the ruins as none of his tourists to this point were willing to do the walk – it was only 15 minutes’ strolling.

‘We saw lower Kakhib, and then the neighbouring higher Kakhib – which was stunning in the afternoon light, though you did have to watch your feet to avoid all the cow poop.’

Inbetween Gamsutl and Kakhib is another abandoned mountaintop village called Koroda, but Smith didn’t manage to get there during her visit. 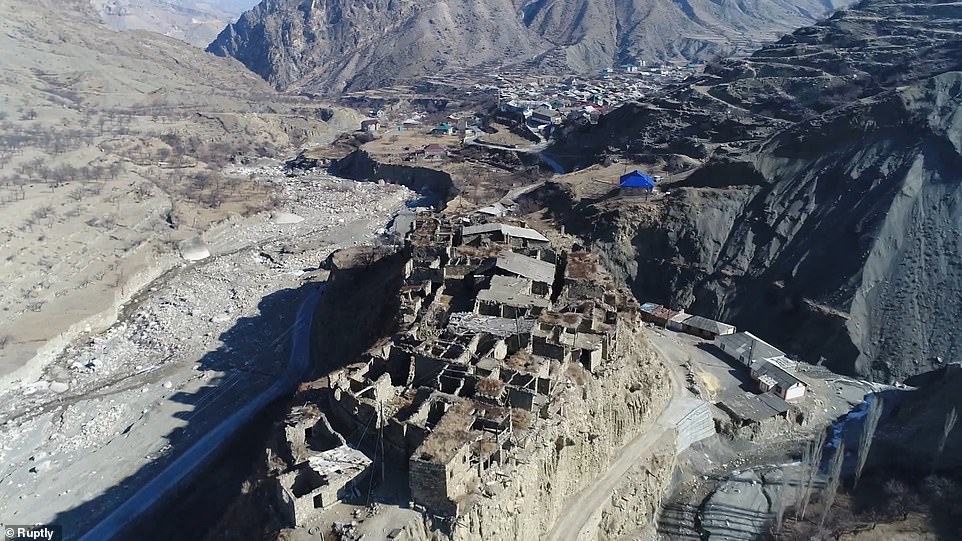 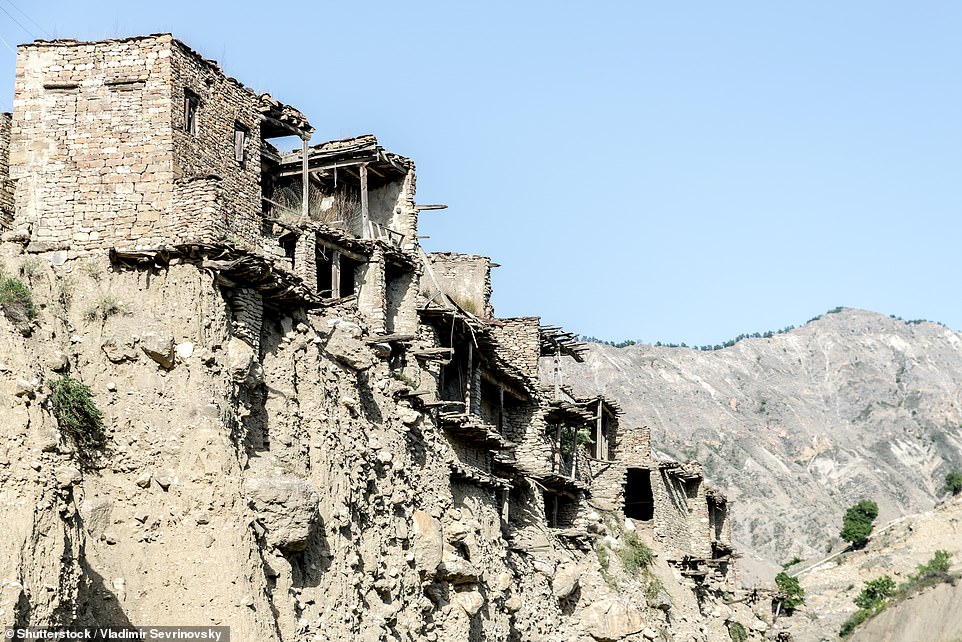 Koroda is located at 4,920ft (1,500m) above sea level and is surrounded by dramatic cliffs 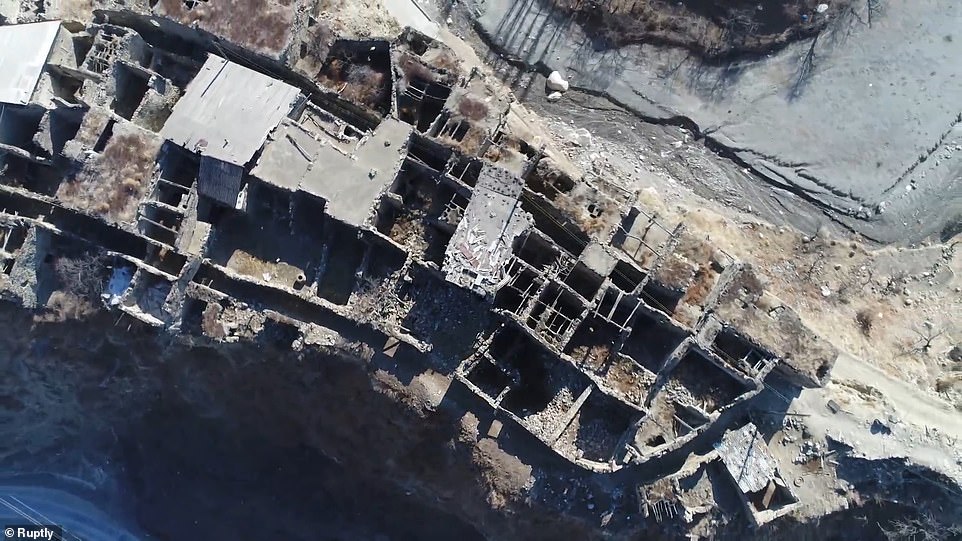 Ancient: Koroda was built between the third and fourth centuries AD 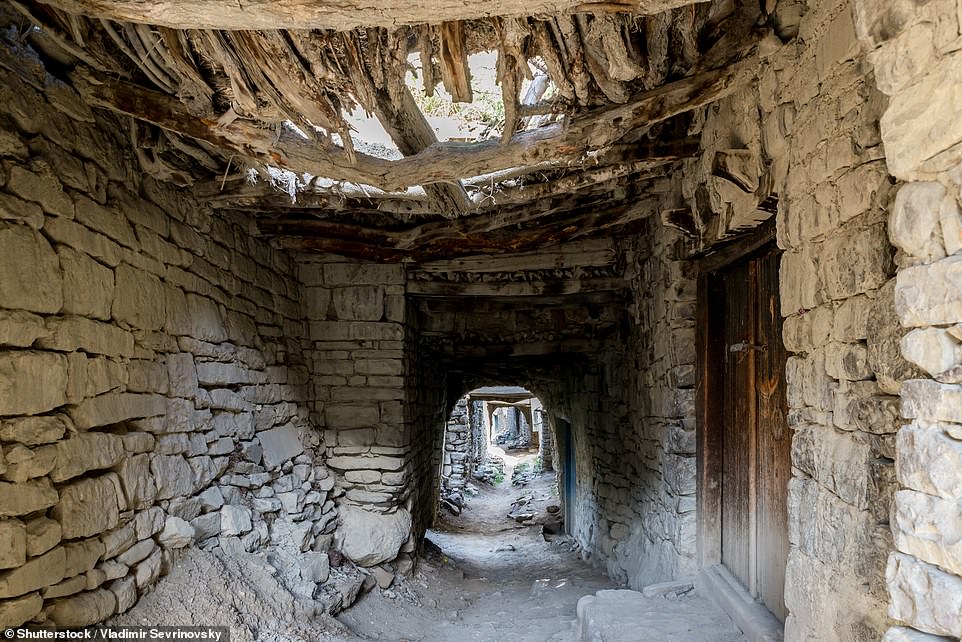 Eerie corridors and walkways are still intact in Koroda, with some of the wooden doors also in place and firmly shut

However, in May 2018 German video news agency Ruptly captured some stunning drone footage of the uninhabited village.

An accompanying description with the aerial video notes that Koroda is located at around 4,920 feet (1,500m) above sea level and is surrounded by ‘awe-inspiring Caucasus cliffs’.

It adds that the village was ‘built on the confluence of two mountain streams between the third and fourth centuries AD’ and according to local records, ‘during the Middle ages Koroda was bustling with life, but as the villagers moved to a new settlement, life in the village dwindled’.

The drone footage captures Koroda’s eerie arched corridors and walkways, with some of the wooden doors to dwellings still intact and closed shut.

One viewer, Bob Mitchell, noted: ‘Wow! What a location. Lovely old stonework. [It] should be preserved and restored. Great off-the-beaten-track tourist destination.’

While JoJoMama added: ‘Someone put a lot of work into this place! Just carrying the stones up there must have been a chore.’

Dagestan was annexed by Russia in 1813 and became fully controlled by it in 1877. It became autonomous in 1921.

Following the collapse of the Soviet Union it has been ravaged by attacks and fighting involving Islamic militants and criminal gangs.

Tours are available, but it should be noted that the FCDO currently advises against all travel to Dagestan. Click here for more information.