Russian state TV has brazenly simulated how Vladimir Putin would launch a nuclear strike on three capital cities in Europe, declaring there would be ‘no survivors’, in response to comments made by UK Armed Forces Minister supporting Ukrainian strikes on Russian infrastructure.

Hosts on Channel One’s 60 Minutes programme announced the cities of London, Paris and Berlin could be hit within 200 seconds of nuclear missiles being launched, as tensions ramp up amid the ongoing war in Ukraine.

It comes as ex-Nato chief Richard Sherriff warned the West must ‘gear itself up’ for a ‘worst case scenario’ war with Russia in Ukraine, amid reports the Russian president could use the country’s victory day parade on May 9 to declare ‘all-out war’ on its neighbour.

On Thursday’s show the chairman of the nationalist Rodina party, Aleksey Zhuravlyov, pondered what would happen if Russia launched nuclear weapons against the UK, saying: ‘one Sarmat missile and the British Isles will be no more.’

When pulled up on the comment by one of the hosts, he insisted he was ‘saying this seriously’, while another host added that the UK has nuclear weapons too and that ‘no one will survive in this war’.

Producers on the show then showed viewers a map seeming to suggest missiles could be launched from Kaliningrad, the Russian enclave between Poland, Lithuania and the Baltic Sea.

It suggested these could reach Berlin in 106 seconds, Paris in 200 seconds and London in 202 seconds.

It comes as the UK and other western nations continue in their support for Ukraine, with allies providing equipment, military vehicles and weapons to the beleaguered country.

In response to the western support of Ukraine, war-mongering Putin ordered the military to test-fire its Sarmat missiles, which are also known as Satan II.

Last week Putin bragged that his country’s hypersonic missiles could ‘break through all modern defences’ and could be ready to strike the UK ‘by autumn’.

Producers on the show put up a map appearing to show how long it would take for Russian missiles to hit the UK, France and Germany if launched from Kaliningrad 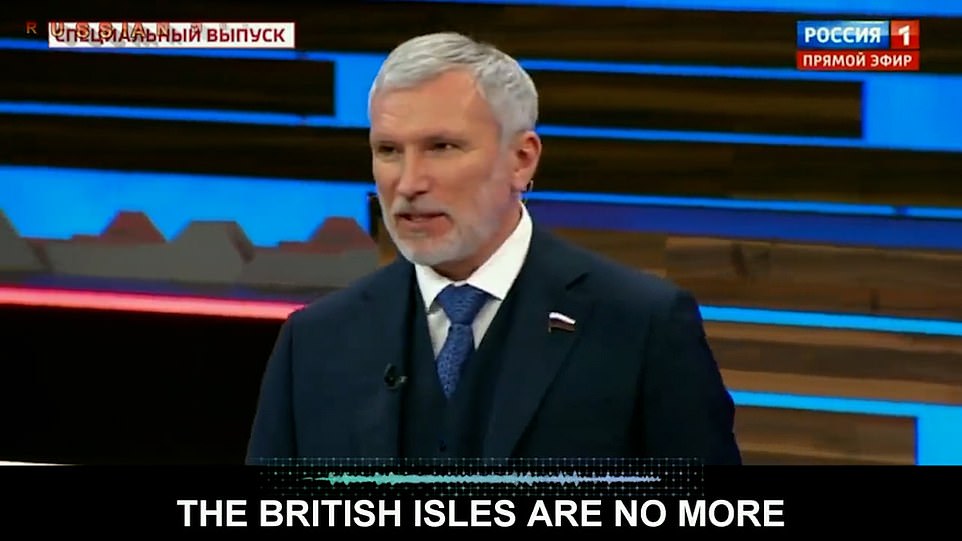 Aleksey Zhuravlyov, chairman of the nationalist Rodina party, angrily declared that the UK was ‘accusing us (Russia) of state terrorism’ on Channel One’s 60 Minutes show 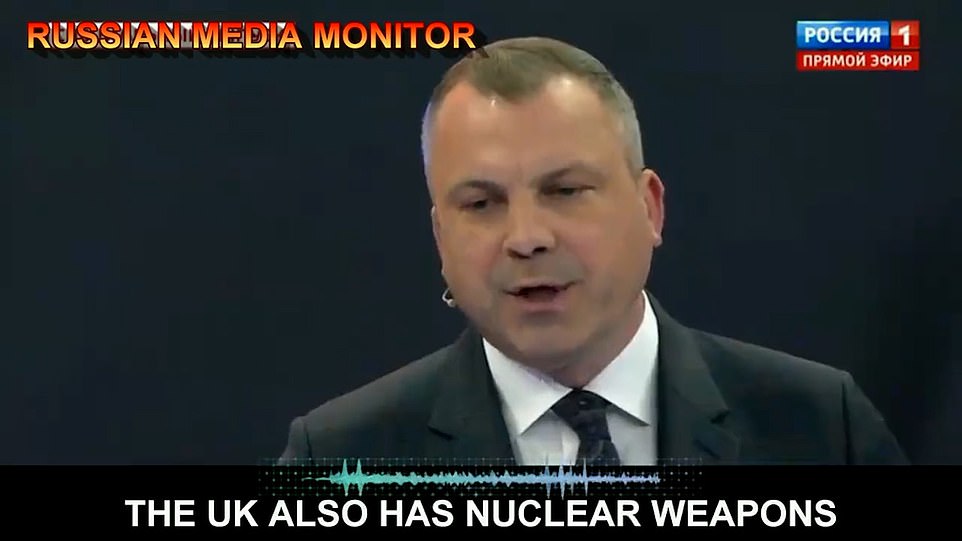 Co-host of the show Evgeny Popov urged caution, saying ‘no one will survive in this war’ if nuclear weapons are used between Russia and the UK 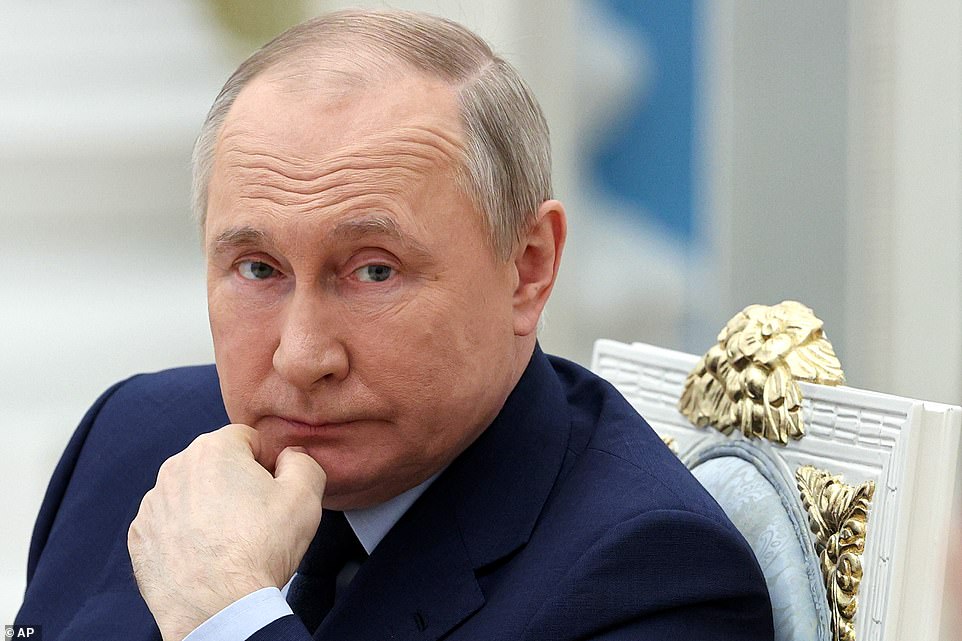 Russian President Vladimir Putin, pictured hear at a meeting in Moscow on April 20, has ordered the army deploys its nuclear-capable ‘Satan II’ missile this autumn

The alarming remarks were made on the show, which is one of Russia’s most watched TV programmes, while hosts and guests discussed comments made by James Heappey, the Armed Forces Minister, in which he said strikes by Ukraine on Russian soil would be ‘legitimate’ if they disrupted supply lines.

The show has been hosted by wife and husband Olga Skabeyeva and Evgeny Popov, who are married with each other, since September 2016, and is one of Russia’s most watched programmes.

A furious Zhuravlyov said: ‘One Sarmat [missile] and that’s it – the British Isles are no more.’

When Skabeyeva cautioned ‘but we are serious people’, the politician hit back ‘and I am saying that seriously’.

‘They’re accusing us of state terrorism’, he fumed, prompting Popov to say ‘the UK also has nuclear weapons’.

Zhuravlyov doubled down, declaring ‘we’ll start with a blank slate’, before saying the missiles ‘can’t be intercepted’.

‘Their abilities are limited. They say they can shoot it down, we’ll see about that,’ he added. 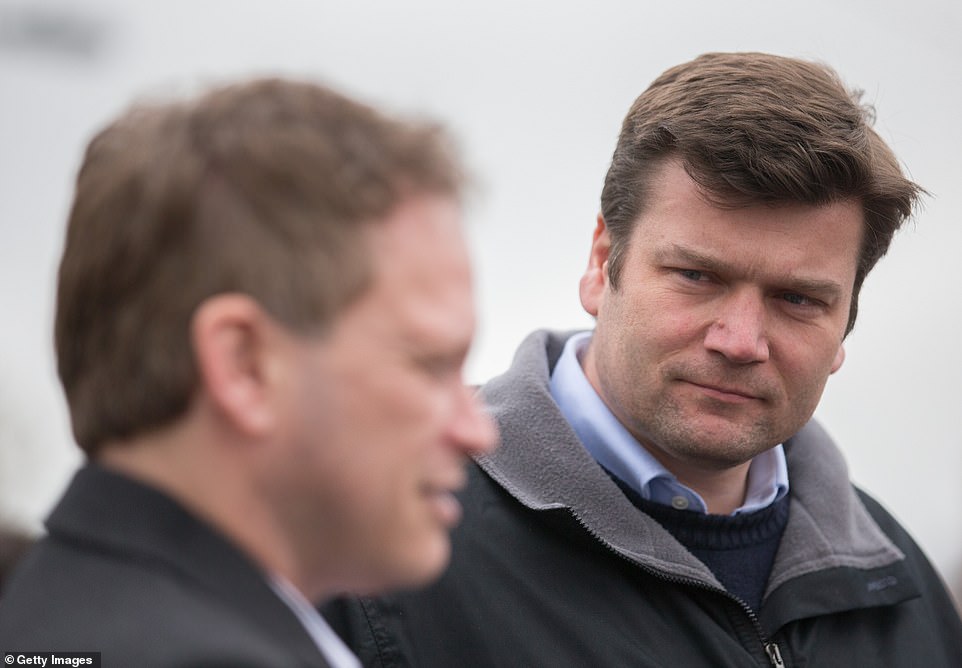 The furious debate was made during a discussion about remarks made by James Heappey (pictured right), the UK Armed Forces Mininster, in which he said it was ‘legitimate’ for Ukraine to carry out attacks on Russian soil to disrupt supply chains 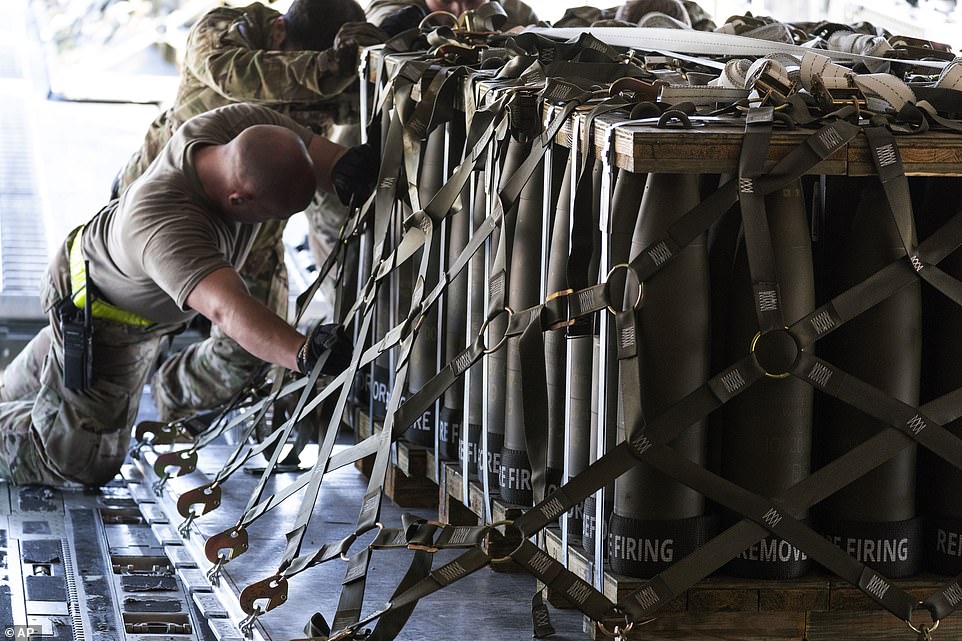 It comes as western nations continue to send supplies to Ukraine, such as these 155mm shells being loaded onto a C-17 aircraft at Dover Air Force Base in Delaware 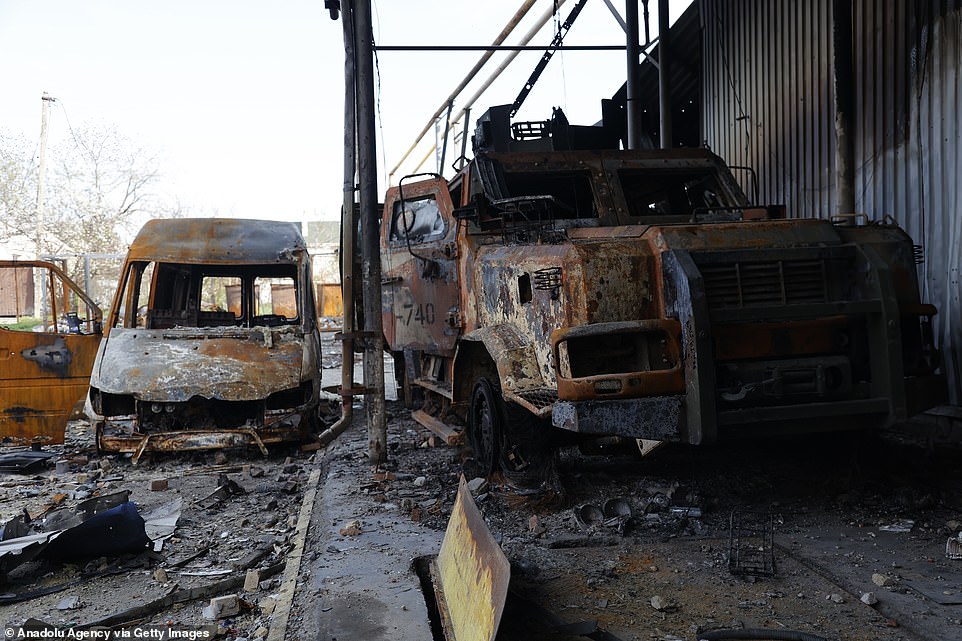 Wrecked vehicles seen in Mariupol, which has been besieged by Russian troops and pro-Russian separatists for more than a month

An incandescent Zhuravlyov continued: ‘They need to be shown this picture. “Guys look at this picture – count the seconds, can you make it? Hello, it’s already here”.’

As Popov struggles to contain his laughter, Zhuravlyov says: ‘That’s the way. Let them think about it. Get a stopwatch, count (to) 220 seconds. That’s how you talk to them, they don’t understand anything else.’

The tirade came after Mr Heappey told Times Radio it is ‘completely legitimate’ for Ukraine to launch attacks on Russian soil.

He said: ‘It is completely legitimate for Ukraine to be targeting in Russia’s depth in order to disrupt the logistics that if they weren’t disrupted would directly contribute to death and carnage on Ukrainian soil. 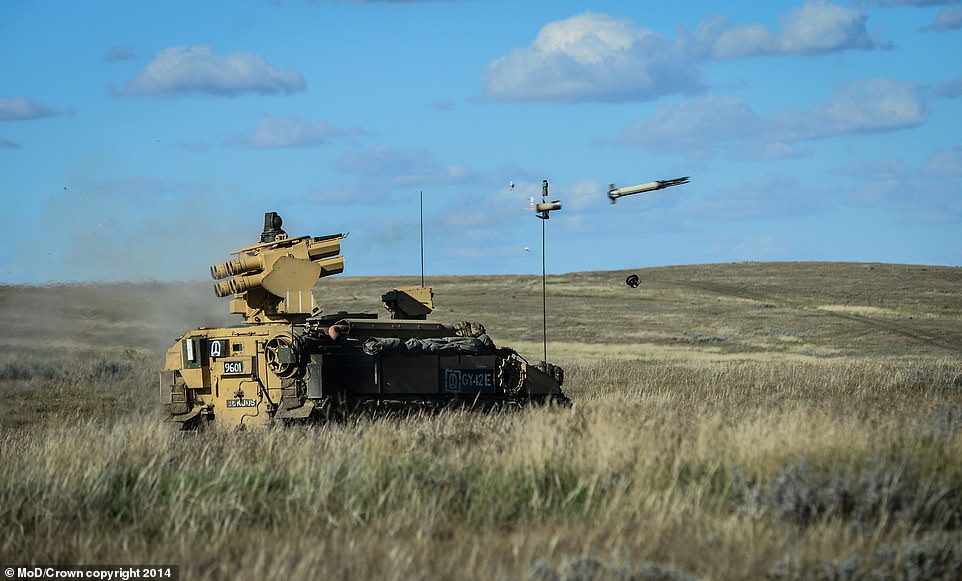 The UK is supplying arms including the Starstreak missile system and Stormer vehicles to carry it, to Ukraine

It is not the first time Zhuravlyov has come to public attention for his comments on the show – in December last year he called for United States Congressman Ruben Gallego to be kidnapped and jailed for his support of arming and training the Ukrainian military.

A month later he claimed Russia should put nuclear weapons in Cuba and Venezuala as a response to military aid from Nato given to Ukraine and Georgia.

He is chairman of the Rodina political party, a far right nationalist party, which supports Vladimir Putin in the State Duma.

‘On a side note, this is the first state TV host who doesn’t seem to be eager to die for the Motherland, arguing with a trigger-happy lawmaker.’

It comes a week after Putin announced his regime’s latest nuclear-capable missile will be deployed as early as this autumn, saying it will ‘force those who try to threaten Russia to think twice’.

The Sarmat missile, or ‘Satan II’, is said to be the world’s longest-range intercontinental ballistic missile, capable of striking a target 11,200 miles away – meaning it could easily strike targets in the US and Europe. 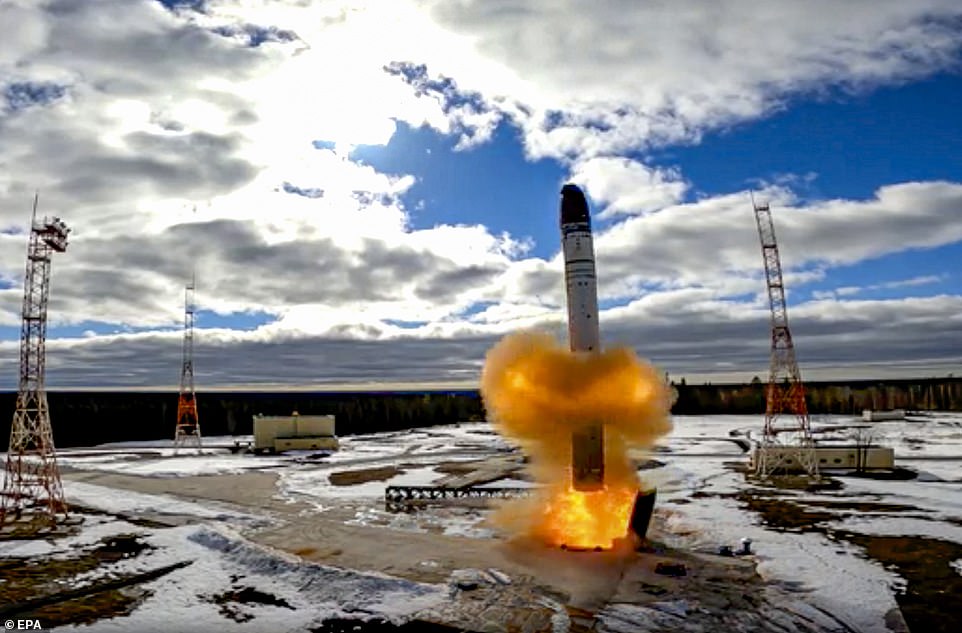 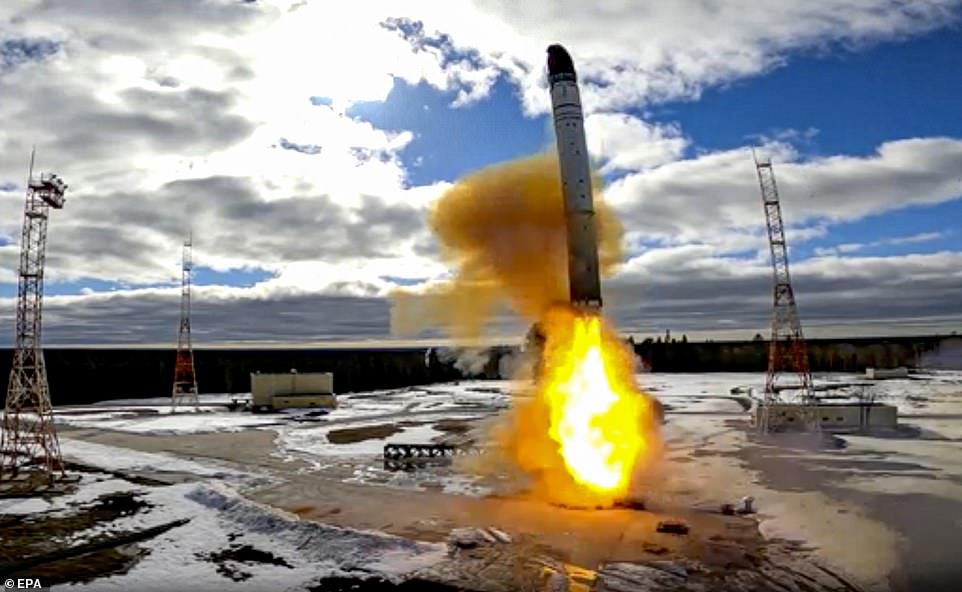 Putin hailed the development of the missile, which was successfully test-fired earlier this week, ‘a big, significant event’ for Russia’s defense industry, saying the Sarmat will ‘ensure Russia’s security from external threats and make those who try to threaten our country with aggressive rhetoric think twice.’

‘The missile can break through all modern anti-missile defences,’ he declared.

‘There is nothing like this anywhere in the world, and won’t be for a long time.’

Western military experts said the Sarmat is capable of carrying 10 or more nuclear warheads and decoys – easily enough to wipe out territories the size of Britain or France in a single strike.

However, analysts believe the autumn target revealed by Putin and Dmitry Rogozin, head of the Roscosmos space agency, is an ambitious one because Moscow reported its first test-launch only on Wednesday and more tests will be needed before the missile can be deployed. 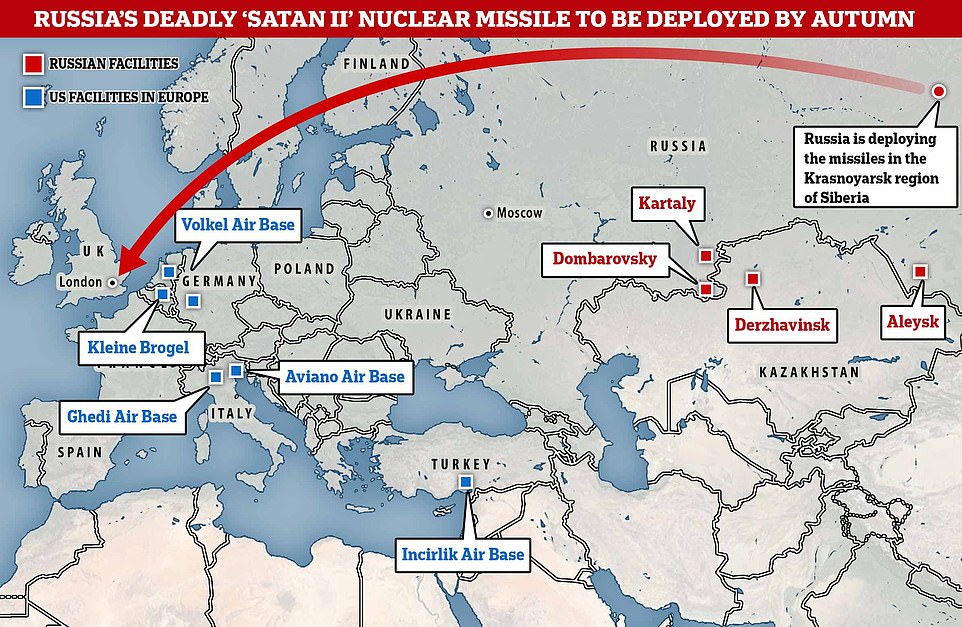 Russia is deploying its Sarmat missile with a unit in the Krasnoyarsk region of Siberia, about 1,860 miles east of Moscow 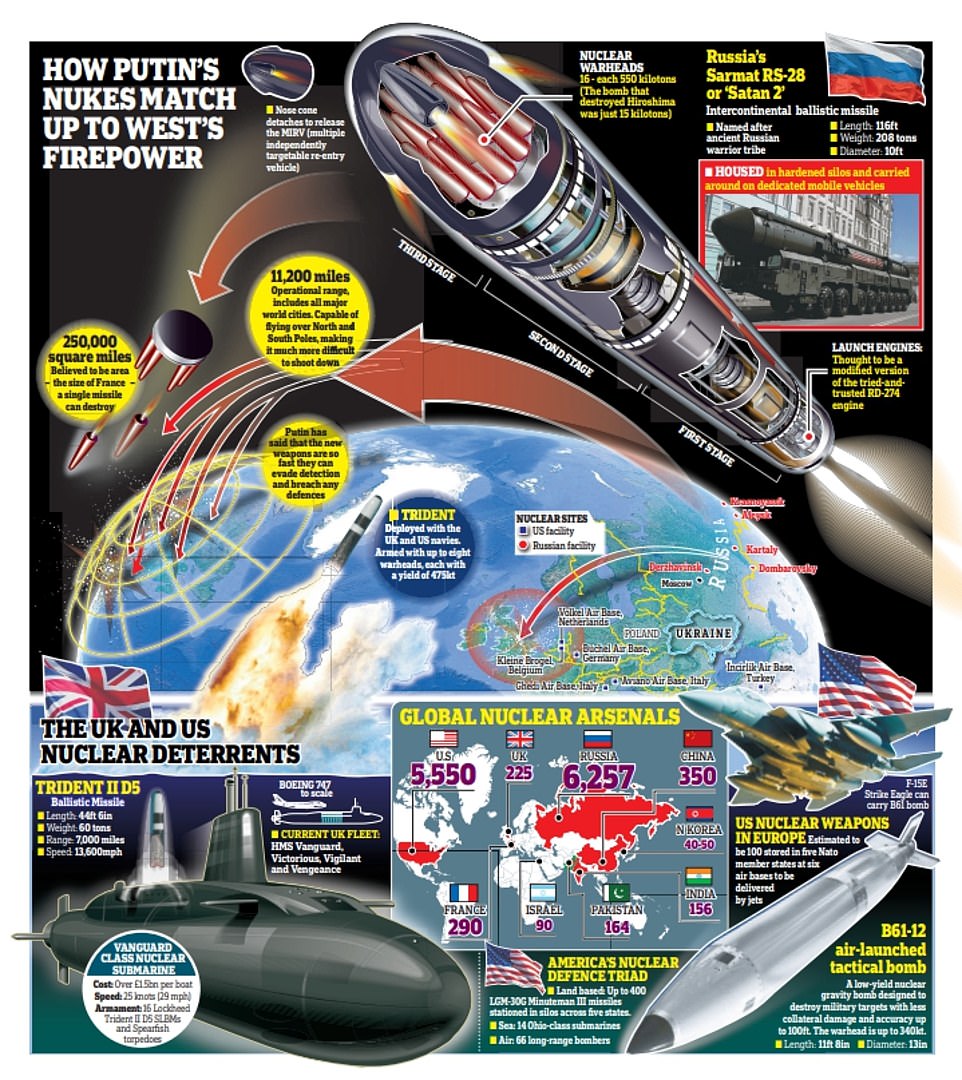 Russia has claimed its most potent nuclear missile, the 16,000mph hypersonic ‘Satan-2’, can destroy the UK

The test, after years of delays due to funding and technical issues, marks a show of strength by Russia at a time when the war in Ukraine has sent tensions with the US and its allies soaring to their highest levels since the 1962 Cuban missile crisis.

Rogozin said in an interview with Russian state TV that the missiles would be deployed with a unit in Uzhur, in the Krasnoyarsk region, about 3,000 km (1,860 miles) east of Moscow.

He said they would be placed at the same sites and in the same silos as the Soviet-era Voyevoda missiles they are replacing, something that would save ‘colossal resources and time’.

The launch of the ‘super-weapon’ was an historic event that would guarantee the security of Russia’s children and grandchildren for the next 30-40 years, Rogozin added.

Are there any defences against intercontinental ballistic missiles?

A number of countries maintain anti-missile systems which aim to shoot down or destroy missiles before the are able to reach their intended targets.

But these systems are typically only effective against small numbers of missiles, travelling well below hypersonic speeds.

The advent of hypersonic missile technology and long-range ICBMs, such as Russia’s latest Sarmat missile, have made anti-missile systems largely redundant.

The U.S.’ Center for Arms Control and Non-Proliferation said that ‘despite decades of research, development, and testing, there remains no reliably effective anti-missile system to counter intercontinental ballistic missiles (ICBMs)’.

Existing missile defence systems, such as the U.S. Patriot system, can target incoming short-, medium- and intermediate-range ballistic missiles whose threat is localised to one region, but cannot effectively protect against nuclear-capable ICBMs such as the Sarmat that can deploy warheads across vast areas.

According to former Assistant Secretary of Defense and U.S. chief weapons evaluator Philip Coyle: ‘All missile defense systems can be overwhelmed… It is only if the attack is limited that the defense can have a hope of not being overwhelmed.’

In the early 2000s, the U.S. began work on developing a specialised system designed to intercept ICBMs, known as the Ground-based Midcourse Defense (GMD) system.

This aims to use a range of sensors and radars, based in locations around the world and in space, to detect ICBM launches and destroy them out of the Earth’s atmosphere, before the warheads have a chance to re-enter and hit their targets.

But the programme is wildly expensive and has returned extremely poor results, even in scripted tests in perfect conditions.