Russia’s Prime Minister Mikhail Mishustin has told President Vladimir Putin that he has tested positive for the coronavirus, and has temporarily stepped back from his work as he begins a period of self isolation.

Speaking during a televised meeting, Mishustin recommended to Putin that First Deputy Prime Minister Andrey Belousov should become the acting Prime Minister for the duration of his absence, a proposal that Putin supported.

‘I have to observe self-isolation and follow orders of doctors. This is necessary to protect my colleagues,’ Mishustin told Putin during the conference call, and said that he would be in constant contact ‘on all the main issues.’

According to the Moscow Times, 54 year-old Mishustin has played a leading role in Russia’s response to the Covid-19 pandemic. He was appointed Prime Minister in January.

Following the news, Putin warned during a televised debate that what has happened to his Prime Minister could happen to anyone.

Another Russian news outlet, Proekt Investigative, said any Russian ministers who had come into contact with Mishustin are being regularly tested for the virus, while staffers are required to wear face masks.

Putin himself has been working remotely since the start of the month following a visit to Russia’s main coronavirus hospital in Moscow. The chief doctor at the hospital tested positive for the coronavirus soon after the president’s visit, according to the Moscow Times.

Mikhail Mishustin, Russia’s Prime Minister, pictured taking part in a video conference meeting in Moscow on April 30 with President Vladimir Putin, in which he told the president that he had has tested positive for the coronavirus and will begin a period of self isolation 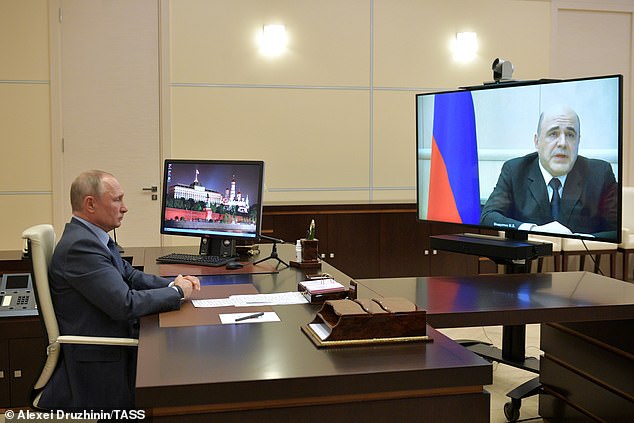 On the other end of the conference call, Russia’s President Vladimir Putin listened to the Prime Minister’s announcement that he has been diagnosed with coronavirus on April 30

Meanwhile, Russia’s coronavirus death toll today reached 1,000 and its total number of cases broke through 100,000 today after another record day of new infections.

Vladimir Putin has warned that Russia is entering ‘the most intense stage’ of the epidemic as medics report shortages of protective gear. 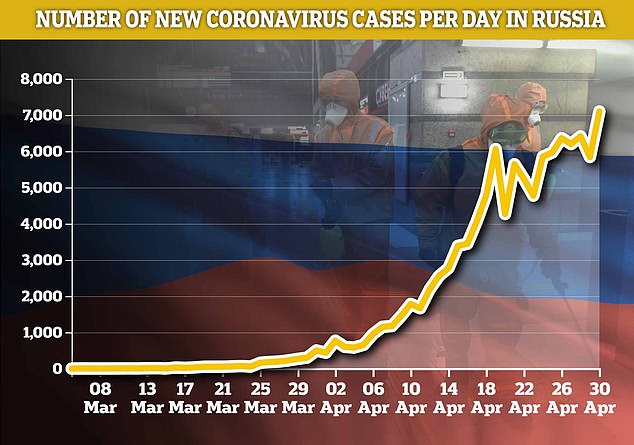 This graph shows the daily number of coronavirus cases in Russia, which reached a new peak of 7,099 today – bringing the total past 100,000 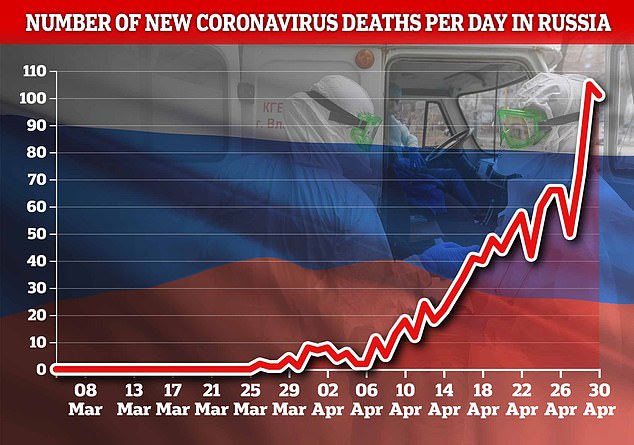 Russia’s daily death toll was above 100 for the second day running as the number of fatalities passed 1,000 today

Moscow has also seen 611 of the 1,073 deaths, while the region which surrounds the capital is responsible for another 93.

St Petersburg, Russia’s second-largest city, has recorded 4,062 cases while the Arctic region of Murmansk has 1,227.

In Siberia, the region of Krasnoyarsk has also seen more than 1,000 cases including 20 fatal ones.

Official figures say 11,619 people have recovered from the disease in Russia, but 93,806 cases are still considered ‘active’.

Russia is rising up the table in confirmed cases, passing Iran and China this week to move into eighth – although there are doubts about those countries’ figures.

However, Russia’s death rate is low compared to many hard-hit countries, with only one death for every 100 confirmed cases. 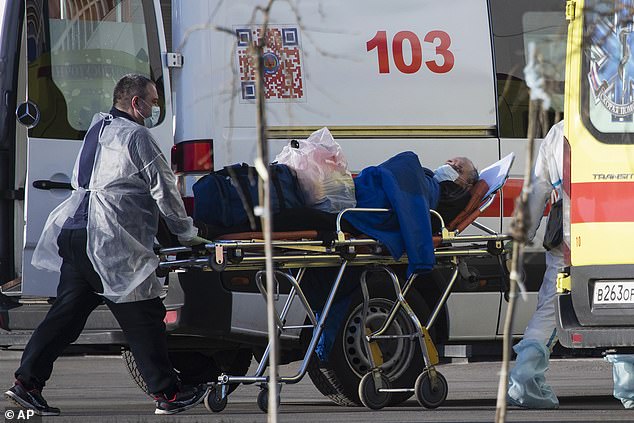 Russia says it has carried out nearly 3.5million tests including many people with mild symptoms who are often missed elsewhere.

Russia is now in its fifth week of a lockdown which has put the economy on course for a 4-6 per cent contraction, the country’s central bank says.

The collapse in oil prices because of vanishing global demand has also battered the country’s economy.

Putin has extended the lockdown until at least May 11, warning that the peak of the outbreak was still to come.

‘The situation is still very difficult,’ said Putin. ‘We are facing a new and perhaps the most intense stage in countering the epidemic.’

Putin said Russia had managed to slow the spread of the epidemic but cautioned that ‘this should not reassure us.’ 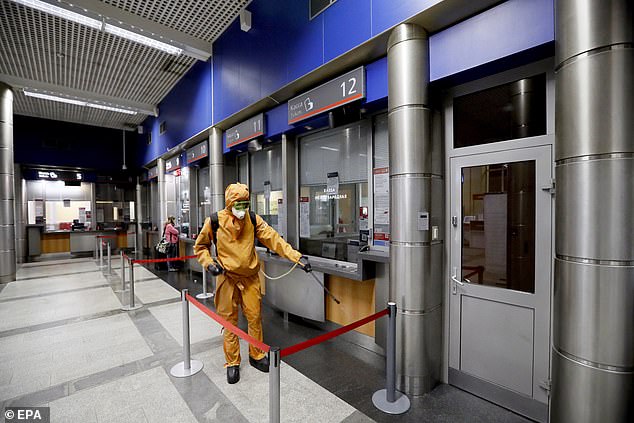 Separately, prime minister Mikhail Mishustin has extended a ban on entry for foreigners into the country, which had been due to expire on Thursday.

The measure will continue until ‘the fight against the infection is over and the epidemic situation has improved,’ the government says.

Medics in Russia have complained of shortages of protective gear and testing kits, while hospital staff are becoming concerned about deaths in the medical community.

The pandemic has also thwarted Putin’s plans for a massive military parade on May 9 commemorating 75 years since the Soviet victory in World War II.

The Kremlin also postponed an April 22 vote on landmark constitutional reforms, which could paved the way for Putin to stay in power until 2036.

Putin is currently set to reach his two-term limit in 2024, but Russia’s parliament has backed a proposal to reset the clock and allow him to run twice more.