Russia launched an ‘outrageous’ airstrike on Ukrainian port city Odesa just hours after it had signed a deal to secure the safe passage of grain out of the country.

US Ambassador to Kyiv Bridget Brink branded the attack ‘outrageous’.

Farhan Haq added: ‘These products are desperately needed to address the global food crisis and ease the suffering of millions of people in need around the globe.

‘Full implementation by the Russian Federation, Ukraine and Turkey is imperative.’

Ukraine’s foreign ministry today urged the UN and Turkey to enforce the deal, which is set to come into place in the next few weeks, following the strikes.

It is unclear whether that will still happen. 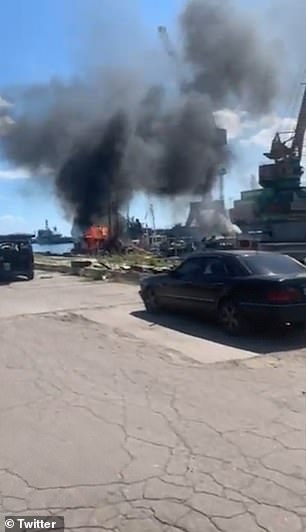 Footage recorded by Odesa locals today showed the port on fire after being struck by Russian Kalibr missiles. Two rockets are thought to have hit targets in the Black Sea export capital

Ms Brink wrote on Twitter:  ‘Russia strikes the port city of Odesa less than 24 hours after signing an agreement to allow shipments of agricultural exports.

‘The Kremlin continues to weaponize food. Russia must be held to account.’

The attack came minutes after Russian bombs fell on a university in Kharkiv, Ukraine’s second city.

At least one was injured at the National University of Economics earlier today. 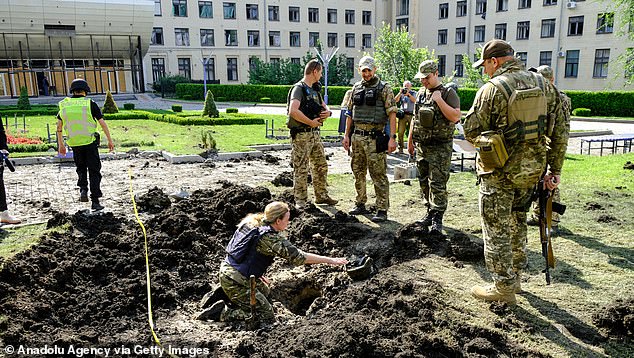 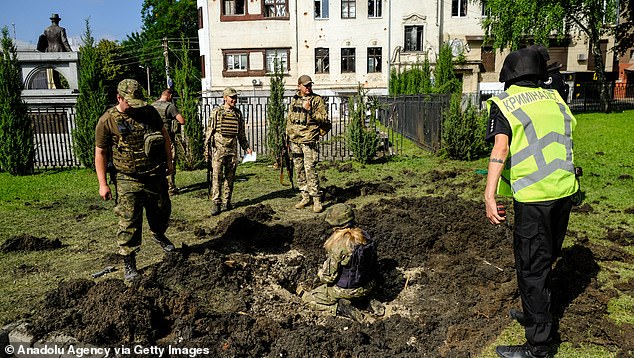 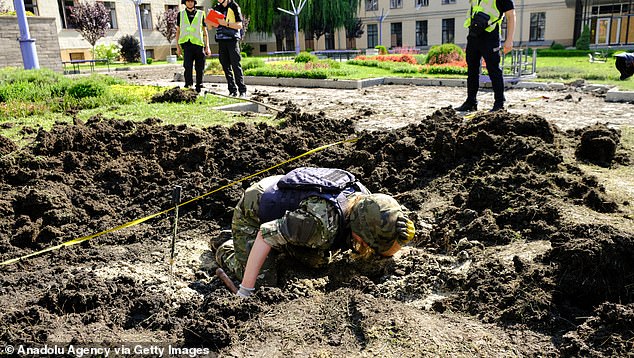 Putin’s grain blockade, in place since the invasion began on February 24, has trapped tens of millions of tonnes of food bound for the Middle East and Africa.

Yesterday’s deal sought to avoid famine among tens of millions of people in poorer nations by injecting wheat, sunflower oil and fertiliser into world markets including for humanitarian needs, partly at lower prices.

Under the plan, Ukrainian officials would guide ships through safe channels across mined waters to three ports, where they would be loaded with grain. 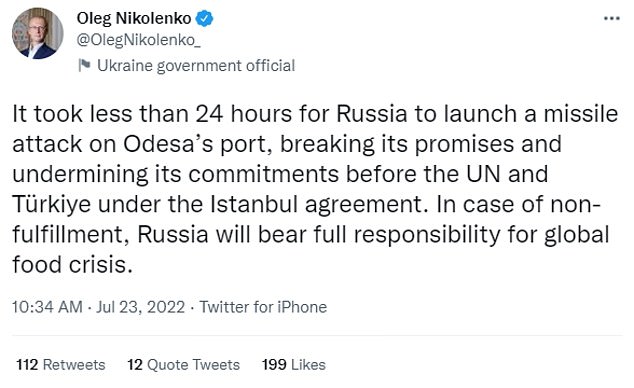 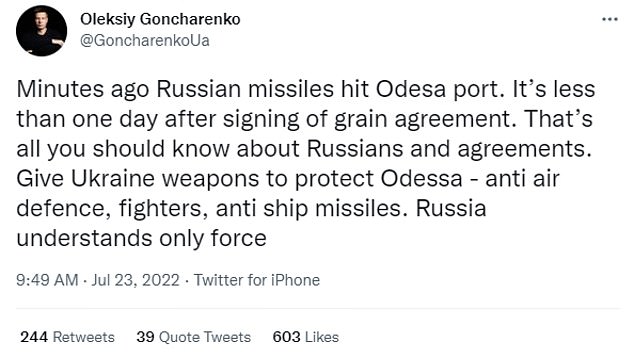 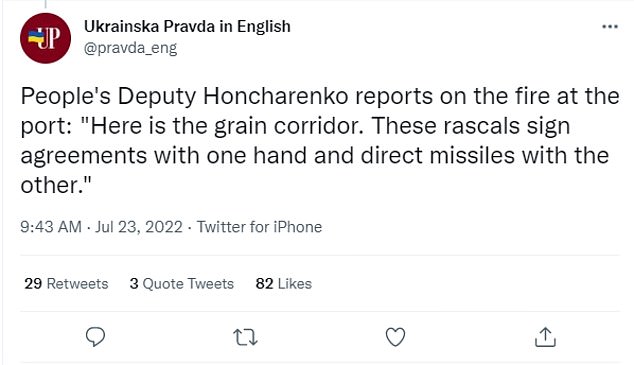 Moscow has denied responsibility for the food supply crisis, blaming sanctions for slowing its own food and fertilizer exports and Ukraine for mining the approaches to its Black Sea ports.

Senior UN officials, briefing reporters on Friday, said the deal was expected to be fully operational in a few weeks and would restore grain shipments from the three reopened ports to pre-war levels of 5 million tonnes a month.

U.N. Secretary-General Antonio Guterres hailed the deal as a ‘an agreement for the world’, though admitted it ‘did not come easy… it has been a long road’. 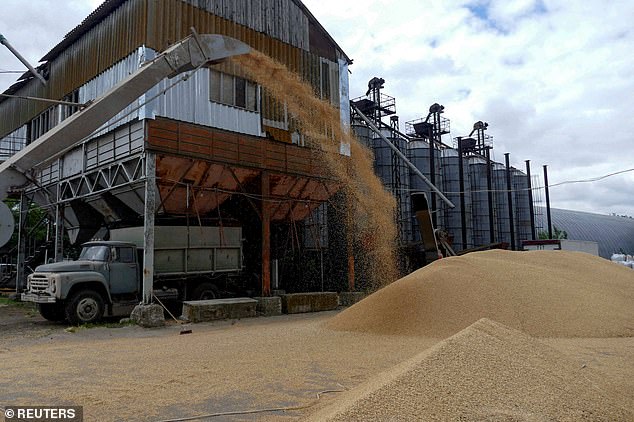 Turkish President Tayyip Erdogan, whose country provided a neutral ground on which to sign the treaty, was quick to lap up praise for his part in organising the arrangement.

‘We are proud to be instrumental in an initiative that will play a major role in solving global food crisis that has been on the agenda for a long time,’ he said.

He went on to boldly claim: ‘War will end at the negotiating table. This is a turning point.’

The blockade on Ukrainian ports by Russia’s Black Sea fleet has worsened global supply chain disruptions and, along with Western sanctions imposed on Moscow, stoked high inflation in food and energy prices since Russian forces swept into Ukraine on Feb. 24. 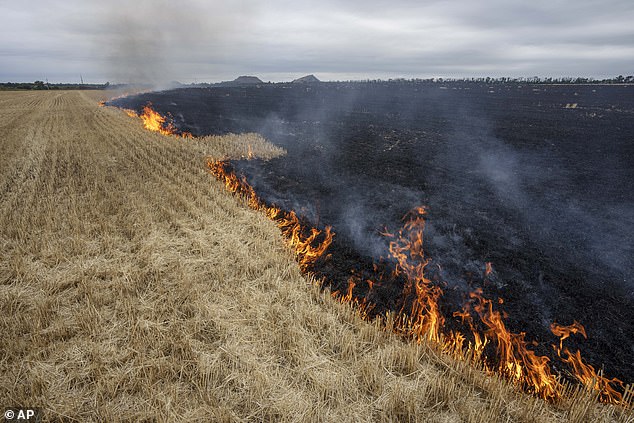 Grain fields burn on the outskirts of Kurakhove near Donetsk, eastern Ukraine on Thursday

Guterres said the accord opens the way to significant volumes of commercial food exports from three key Ukrainian ports – Odesa, Chernomorsk and Yuzhny – and explained the U.N. would set up a coordination centre to monitor implementation of the deal.

British foreign secretary and prime ministerial candidate Liz Truss congratulated Turkey and the U.N. for brokering the deal, but stressed the onus lay with Russia to honour its promises.

‘Putin’s barbaric invasion of Ukraine has meant some of the poorest and most vulnerable people in the world are at risk of having nothing to eat,’ Truss said in a statement.

‘Now this agreement must be implemented, and we will be watching to ensure Russia’s actions match its words.’ 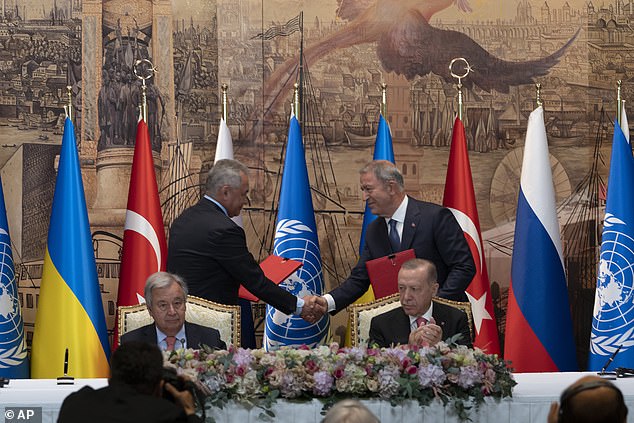 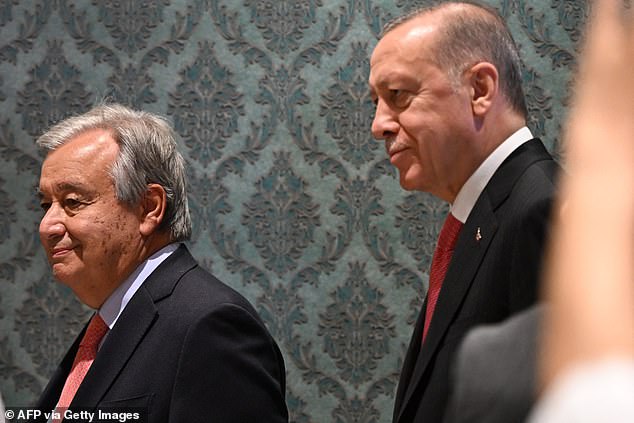 United Nations (UN) Secretary-General Antonio Guterres (L) and Turkish President Recep Tayyip Erdogan (R) arrive for a signature ceremony of an initiative on the safe transportation of grain and foodstuffs from Ukrainian ports, in Istanbul

The United States also welcomed the deal and said it was focusing on holding Russia accountable for implementing it.

Mr Guterres said that overseeing the deal was one of the most important feats in his career, but admitted nothing could be done to punish Russia if it were to renege on the terms of the agreement.

The U.N. chief said a breach of the agreement would constitute ‘an absolutely unacceptable scandal and the whole international community would react in a very strong way.’ 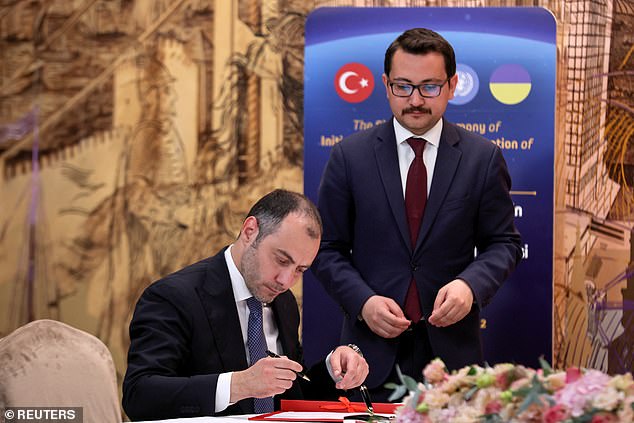 Russian Defence Minister Sergei Shoigu, who signed the agreement personally, said that Moscow would not ‘take advantage’ of the de-mining and opening of Ukrainian ports.

‘Russia has taken on the obligations that are clearly spelled out in this document,’ Shoigu said on the Rossiya-24 state TV channel after the signing ceremony in Istanbul.

‘We will not take advantage of the fact that the ports will be cleared and opened.

‘We have made this commitment.’

Turkey, a NATO member that has good relations with both Russia and Ukraine, controls the straits leading to the Black Sea and has acted as a mediator on grain.

Russian-Israeli oligarch Roman Abramovich, who has also been acting as a negotiator and ambassador, was pictured in attendance at yesterday’s signing.

Guy Platten, secretary-general of the International Chamber of Shipping (ICS), told reporters that it remains to be seen how the exports would commence, given that Ukrainian shores are peppered with mines.

‘This is a long-needed breakthrough for the millions of people who rely on the safe passage of grain to survive. But although this is an important step, lots of work remains to be done,’ he said.

‘Ensuring crew safety will be crucial if we are to get this agreement moving quickly. Questions remain over how ships will navigate heavily mined waters, and how we can effectively crew the ships in the region to meet the suggested deadline.’