Russia has warned NATO that if Sweden and Finland joined the military alliance then the Kremlin would have to bolster its nuclear defences in the Baltic.

‘There can be no more talk of any nuclear-free status for the Baltic – the balance must be restored,’ said Dmitry Medvedev, deputy chairman of Russia’s Security Council.

‘Until today, Russia has not taken such measures and was not going to,’ Medvedev said.

The threat comes after Sweden and Finland edged closer to NATO membership yesterday, and their application bids could be submitted in weeks.

Sweden’s prime minister Magdalena Andersson is understood to be eager for the country to join the trans-Atlantic alliance by June, to the fury of Vladimir Putin who invaded Ukraine in part for its desire to join to the pact. 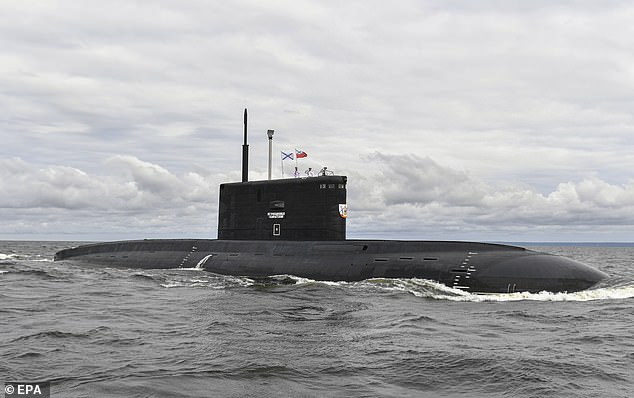 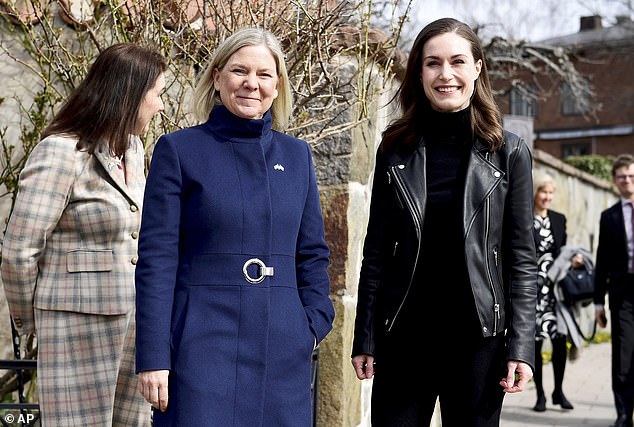 Finland, along with neighbouring Sweden, has historically avoided NATO membership, despite close alignment with the West, in an effort not to provoke Russia.

But Putin’s invasion of Ukraine has decisively changed public opinion in the Scandinavian countries after Russia began the war with a barrage of rhetoric about stopping NATO expansion.

Andersson hosted Finnish prime minister Sanna Marin in Stockholm yesterday to discuss their prospective memberships of the alliance, as a Finnish government report on its international security was also released, sparking their potential bid.

The Swedish application is expected to be submitted by the NATO meeting in Madrid on June 29-20, Swedish reports said yesterday.

Similarly, Finland is hoping to start its application process ‘within weeks, not within months’, its prime minister Sanna Marin said.

This comes despite Moscow lawmaker Vladimir Dzhabarov having recently warned it would mean ‘the destruction of the country’. 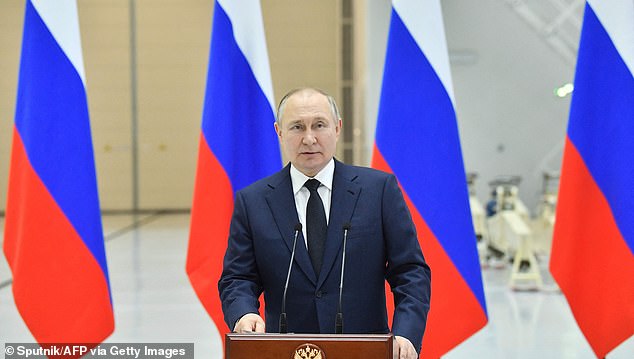 After today’s warning, Lithuanian Defence Minister Arvydas Anusauskas said Russia already has nuclear weapons in the Baltic it does not publicly acknowledge.

Anusauskas told Lithuania’s BNS wire that nuclear weapons have been deployed in Russia’s Kaliningrad exclave on the Baltic Sea since before the current crisis.

‘The current Russian threats look quite strange, when we know that, even without the present security situation, they keep the weapon 100 km from Lithuania’s border.

Why are Sweden and Finland not in NATO?

Both Finland and Sweden have been militarily non-aligned since WWII.

Sweden maintained its policy of neutrality – which had begun in the early 19th century – throughout the war wanting to avoid being drawn into a conflict that was engulfing the nearby powers of Germany and the Soviet Union.

Instead, Sweden profited from its neutrality by exporting iron ore to the Nazis and sharing military intelligence with the Allies and training their refugee soldiers.

Meanwhile Finland changed sides in the conflict, first being invaded by Joseph Stalin and assisting the Nazis, before fighting against Hitler’s troops.

When NATO was formed in 1949 for a Western military alliance, Sweden decided not to join and continue its neutrality, introducing a security policy that secured its non-alignment in peace and neutrality in war.

In 1994, Stockholm decided to join the NATO programme Partnership for Peace (PfP), aimed to build trust between member states and other European countries, but until now it has not signalled a desire to fully join the alliance.

Finland is also a PfP member but has similarly stated its desire to remain neutral since the war.

The EU member state was part of the Russian Empire and won independence during the 1917 Russian revolution but it nearly lost it fighting the Soviet Union in World War Two.

Having been invaded by Russia in 1939 and sharing a long border with the superpower, Finland wanted to stay out of future conflicts, giving it the freedom to maintain a strong relationship with Moscow and the West while enjoying a free market economy.

‘Nuclear weapons have always been kept in Kaliningrad … the international community, the countries in the region, are perfectly aware of this … They use it as a threat.’

Russia’s Kaliningrad exclave, on the shore of the Baltic Sea, is sandwiched between NATO members Lithuania and Poland.

Lithuanian Prime Minister Ingrida Simonyte on Thursday said the Russian threat to increase military, including nuclear, in the Baltic region was ‘nothing new’.

The assault on Ukraine sparked a dramatic U-turn in public and political opinion in Finland and neighbouring Sweden regarding their long-held policies of military non-alignment.

Attempting to join NATO would almost certainly be seen as a provocation by Moscow, for whom the alliance’s expansion on its borders has been a prime security grievance.

The centre-left Social Democrats have historically opposed NATO membership but the brutal invasion of Ukraine has reignited debate in the Scandinavian kingdom.

A policy reversal for the party, which ruled for an uninterrupted 40 years between the 1930s and 1970s, would be historic.

Sweden is officially non-aligned militarily, although it is a NATO partner and abandoned its position of strict neutrality after the end of the Cold War.

Having initially stressed that non-alignment had ‘served Sweden’s interests well,’ Andersson recently conceded that she was ready to discuss the policy and in late March said she ‘did not rule out’ a bid to join NATO.

Finland has a long history with Russia. In 1917 it declared independence after 150 years of Russian rule.

During World War II, its vastly outnumbered army fought off a Soviet invasion, before a peace deal saw it cede several border areas to the Soviet Union.

During the Cold War, Finland remained neutral in exchange for guarantees from Moscow that it would not invade.

So the turnaround in sentiment on NATO would have been unthinkable just a few months ago.

As recently as January, Marin said membership was ‘very unlikely’ during her term.

But after two decades of public support for membership remaining steady at 20-30 per cent, the war caused a huge surge.

Recent surveys by a Finnish market research company put 84 per cent of Finns as viewing Russia as a ‘significant military threat’, up by 25 per cent on last year. 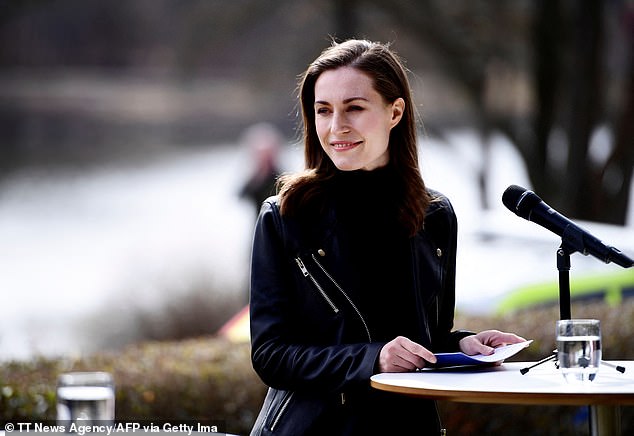 Finland is hoping to start its application process ‘within weeks, not within months’, with a decision expected soon on the country’s security. PM Sanna Marin is pictured yesterday 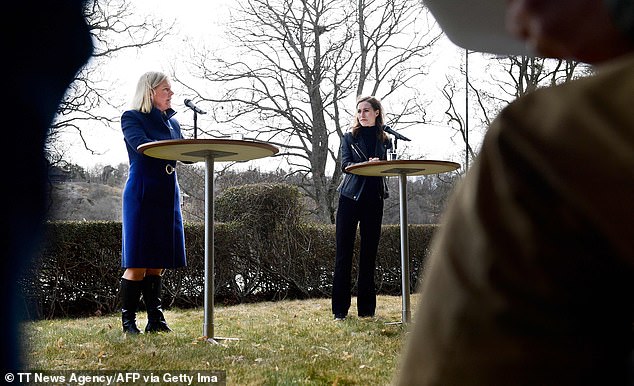 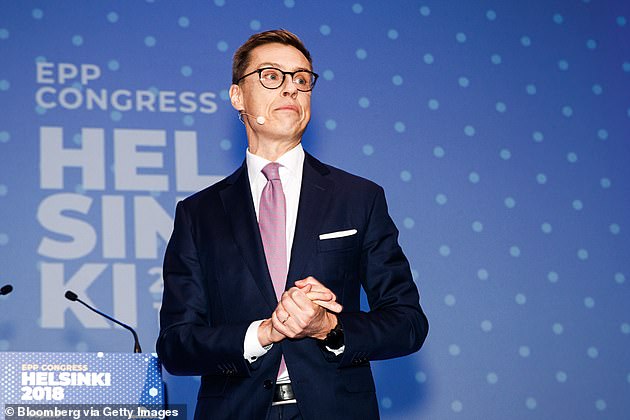 In response, Kremlin spokesperson Dmitry Peskov euphemistically warned the move would ‘not improve’ the security situation in Europe, and Moscow lawmaker Vladimir Dzhabarov added more bluntly it would mean ‘the destruction of the country’.

‘We have repeatedly said that the alliance remains a tool geared towards confrontation and its further expansion will not bring stability to the European continent,’ Peskov said.

Others say they will announce a position after detailed discussions.

The government said it hopes to build a parliamentary consensus over the coming weeks, with MPs due to hear from a number of security experts.

Marin expects a decision ‘before midsummer’, with many analysts predicting Finland could submit a bid in time for a NATO summit in June.

Any membership bid must be accepted by all 30 NATO states, a process that could take four months to a year. 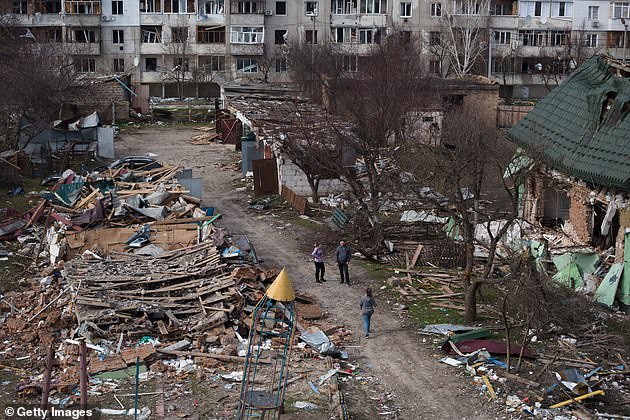 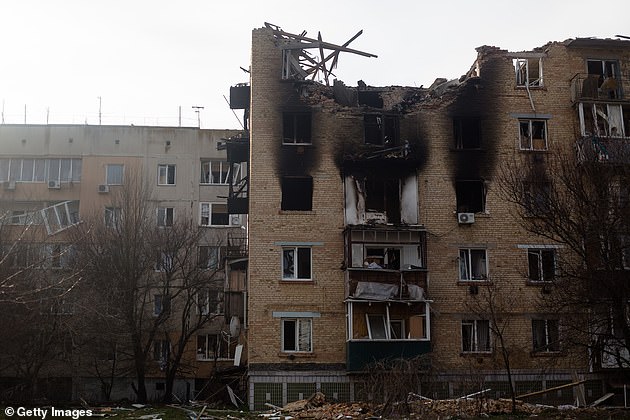 A view of a residential building destroyed as a result of shellfire in Ukraine, which Russia has threatened on Finland

Unlike Finland, Sweden shares no land border with Russia and the two countries have not been at war for two centuries.

Nonetheless, pro-NATO sentiment is also rising among Swedes who ‘are realising that they might find themselves in the same position as Ukraine, a lot of sympathy but no military help,’ said Robert Dalsjo, research director at the Swedish Defence Research Agency.

Many commentators expect Sweden and Finland will act in tandem on whether to join, but their leaders stressed they may reach differing decisions.

Sweden’s ruling party this week announced a review of its long-held opposition to joining NATO.

‘For the Social Democrats in Sweden to change opinion [on NATO] is like changing religion,’ former Finnish PM Alexander Stubb said. ‘And I’m not talking Protestant to Catholic, I’m talking Christian to Muslim.’

‘Russia will most certainly huff and puff,’ Dalsjo said, but added: ‘I don’t think they will do anything violent.

‘However, in the mood that [Russian President Vladimir] Putin is right now, I wouldn’t rule it out entirely.’

When Russia last tried to seize Finland… and failed

More than 80 years ago, the small Finland took on the might of the Soviet Union when dictator Joseph Stalin ordered an invasion after its government refused to give up substantial territory.

The Winter War of 1939-1940 – which began less than three months after the start of the Second World War – saw Finland’s forces use innovative tactics to defy Russia’s hopes for a quick, emphatic victory that could have landed Stalin control of the whole country.

Instead, Soviet troops – who numbered around one million – were fiercely resisted for nearly three months, with dramatic photos showing how vehicles and equipment had to be abandoned in the face of the opposition and freezing conditions.

Stories of Finnish heroics include that of a Finnish farmer who became the deadliest sniper in history after killing 505 Soviet troops.

In the fighting, Finland also pioneered the use of the improvised grenade the Molotov cocktail, which was named after the Soviet Union’s foreign minister.

Ultimately however, the sheer numerical superiority of the Soviet Union’s forces took its toll and Finland’s government was eventually forced to sign a peace agreement that forced them to give up around ten per cent of their territory.

Despite the defeat, Finland emerged with its sovereignty intact and its international reputation enhanced, whilst the Soviet Union was kicked out of the League of Nations and was condemned by other world leaders for the illegal invasion.

Finnish sniper Simo Häyhä emerged a hero after racking up the most sniper kills in the history of warfare.

Aged 33 when the war broke out, Häyhä quickly acquired a fearsome reputation, striking the enemy unseen and unheard from hidden positions up to 300 yards from his target.

Nicknamed The White Death, Häyhä was a prime target for the Soviets, who targeted him with mortars and heavy artillery to halt his killing spree, which once claimed 25 men in one day.

Finland then allied with Nazi Germany against the Soviets in what was known as the Continuation War in 1941, with Helsinki trying to retake its lost territories.

After a ceasefire was agreed in the Moscow Armistice in 1944, Finland was ordered to expel Nazi troops stationed in the country, prompting the Lapland War with Germany.

At the Paris Peace Treaty, Finland was classified as an ally with Nazi Germany and ordered to pay reparations.

The country then pursued a policy of neutrality, maintaining a free market economy and democracy despite enjoying a strong relationship with the Soviet Union.