By Helena Kelly For The Daily Mail

A smear campaign has been launched in Russia to discredit the coronavirus vaccine developed by Oxford University scientists.

It aims to spread fear about the vaccine with ridiculous claims that it will turn people into apes because it uses a chimpanzee virus.

Images and video clips suggesting any vaccine made in the UK would be dangerous are circulating on Russian social media.

Some were shown on the Russian TV programme Vesti News, said to be the country’s equivalent of the BBC’s Newsnight.

One image shows Boris Johnson walking into Downing Street, but it has been manipulated to make him look like a yeti. The picture is captioned: ‘I like my bigfoot vaccine’.

Another image shows a chimpanzee in a lab coat from pharmaceutical giant AstraZeneca – which is manufacturing the vaccine – brandishing a syringe.

America’s Uncle Sam appears in another crude image with the message: ‘I want you – to take the monkey vaccine’.

The campaign has the potential to damage the Oxford programme by appealing to anti-vaccine fanatics.

It is aimed to hit sales in countries where Russia wants to sell its own Sputnik V jab. 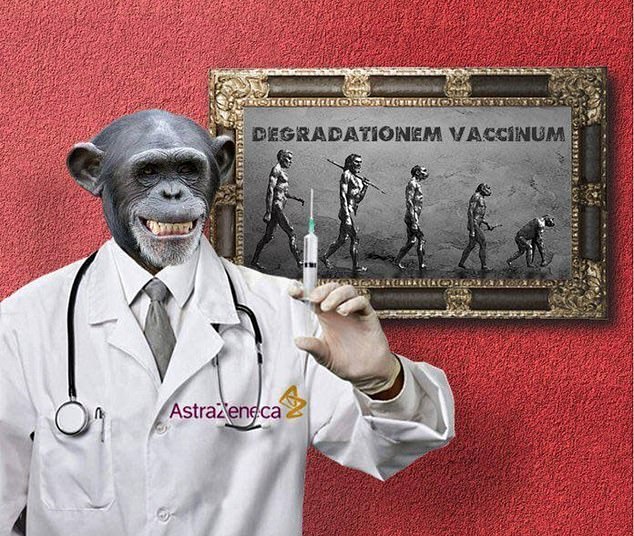 He told The Times: ‘Scientists at AstraZeneca and at many other companies and institutions around the world are working tirelessly to develop a vaccine and therapeutic treatments to defeat this virus.

‘But it is independent experts and regulatory agencies across the world that ultimately decide if a vaccine is safe and effective before it is approved for use. Misinformation is a clear risk to public health.

‘This is especially true during the current pandemic which continues to claim tens of thousands of lives, significantly disrupt the way we live and damage the economy. 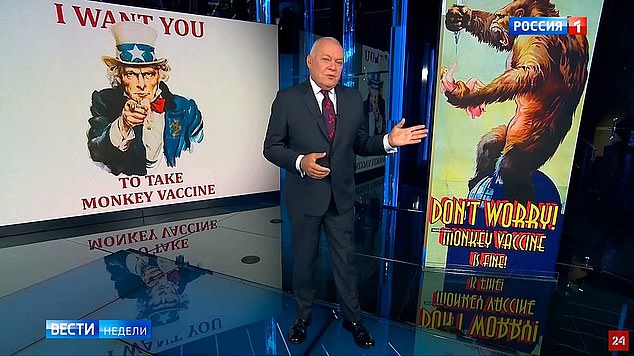 America’s Uncle Sam appears in another crude image with the message: ‘I want you – to take the monkey vaccine’

‘I urge everyone to use reliable sources of information, to trust regulatory agencies and to remember the enormous benefit vaccines and medicines continue to bring to humanity.’

A whistleblower reportedly said that the aim of the smear was to place the images on Western websites.

The campaign began over a month ago after a volunteer in the Oxford trial fell ill meaning the project was temporarily halted.

Countries such as India and Brazil, where Russia was trying to market its own vaccine, have been targeted by the campaign, the whistleblower told the Times.

It is not clear if the propaganda attempt was directly authorised by the Kremlin.