EXPRESS INFORMER > Health & Medicine > Russia, India and Indonesia have all faced MORE excess deaths than the US, WHO says

America has not suffered the most pandemic deaths in the world, according to estimates from the World Health Organization.

The U.S. is expected to become the first nation to cross the grim milestone of recording more than a million Covid deaths in the coming days, with figures from Johns Hopkins University hovering around the 996,000 mark on Thursday.

But in the most comprehensive look into the pandemic’s fatality count yet, statisticians suggest three other countries — Russia, India and Indonesia — have already suffered a higher death toll.

The above graph shows the ten countries that recorded the most excess fatalities in 2020 and 2021. Excess fatalities are the number of deaths above those expected over the same period. It revealed India has faced the most followed by Russia and Indonesia. The US (shown in red) ranked fourth overall with 932,000 deaths 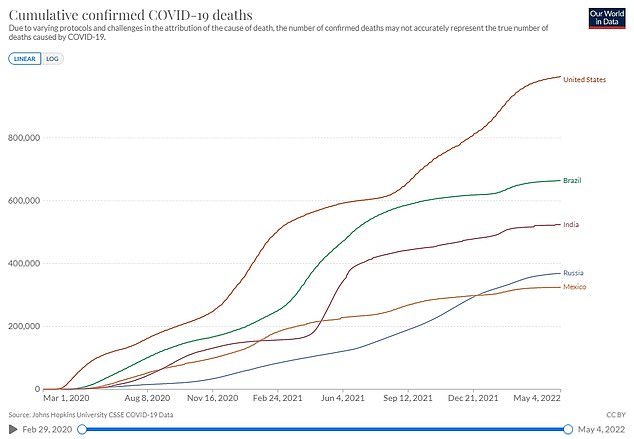 The above graph shows the number of confirmed Covid deaths globally. It reveals the US is about to hit a million deaths, the most out of any nation, but the figures are skewed because of a lack of testing in other countries leaving many fatalities from the virus unrecorded. The graph shows the countries with the five highest Covid death tolls

For the report published Thursday WHO analysts looked at excess deaths in 149 countries, or the number from all-causes above those expected for the time of year.

This is widely regarded as a better measure of the impact of the pandemic because it takes into account strain on the health system and a lack of testing.

The WHO said excess fatalities could either be attributed to Covid or because disruptions to healthcare left people with other conditions — such as heart disease — unable to access life-saving care.

Which countries have recorded the most excess Covid deaths in the world?

Figures from the World Health Organizaton’s report. For the years 2020 and 2021.

The report did not consider 2022, and the impact of the Omicron wave over the Christmas vacation period.

Figures compiled by OurWorldinData suggest the U.S. has already recorded 996,000 Covid fatalities, which is the most in the world.

Experts blame the country’s high toll on a lack of political leadership early in the pandemic.

They add that difficulties accessing healthcare, and poor population health have also contributed to the figure.

But the country’s size — with more than 329million people — also explains its position at the top.

To even out differences due to population the figures were also considered as deaths per 100,000 people, to allow for comparison between countries.

The WHO report also revealed today that the world’s actual Covid death toll is nearly three times higher than the official tally.

In the most comprehensive look into the pandemic’s fatality count yet, the WHO estimated that almost 15million deaths were logged from the start of 2020 to the end of 2021.

The UN agency’s tally, which misses off the entirety of 2022, includes people who directly died from Covid or the virus’s impact on overwhelmed health systems.

For comparison, the current official virus death toll is 6.2million, with a third of those logged in the US, Brazil and India.

The WHO said 20 countries, including the UK and the US, accounted for more than 80 per cent of the estimated ‘excess deaths’ over the first two years of the pandemic. 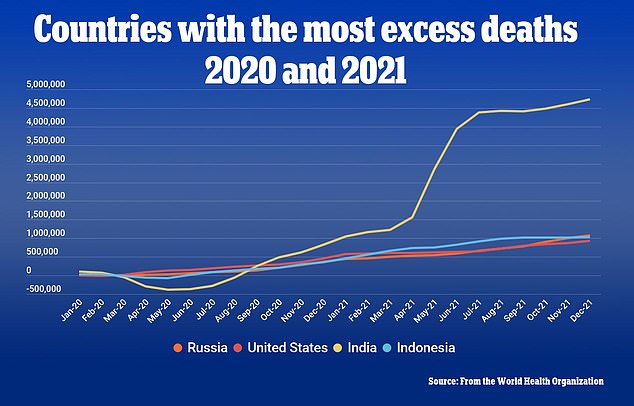 This graph shows cumulative excess deaths over time between 2020 and 2021 in the four countries that had suffered the most extra fatalities. These figures can also fall below zero if a country records less fatalities than expected for the time of year

Dr Albert Ko, an infectious diseases expert at the Yale School of Public Health, said the WHO analysis ‘may seem like just a bean-counting exercise’.

‘But having these WHO numbers is so critical to understanding how we should combat future pandemics and continue to respond to this one,’ he said.