Russia moved to stop the worst escalation of fighting in the separatist region of Nagorno-Karabakh in more than a quarter-century by hosting ceasefire talks on Friday.

Late Thursday, Russian President Vladimir Putin issued a statement calling for a break in the fighting between the Armenian and Azerbaijani forces that have raged for nearly two weeks over the region. The Kremlin said Putin’s initiative followed a series of calls with Armenian Prime Minister Nikol Pashinian and Azerbaijani President Ilham Aliyev.

The latest outburst of fighting between Azerbaijani and Armenian forces began Sept. 27 and marked the biggest escalation of the decades-old conflict over Nagorno-Karabakh. The region lies in Azerbaijan but has been under control of ethnic Armenian forces backed by Armenia since the end of a separatist war in 1994.

The Kremlin said Putin proposed calling a ceasefire to exchange prisoners and collect the bodies of dead soldiers. Russian Foreign Minister Sergey Lavrov greeted his Armenian and Azerbaijani counterparts at the ministry’s mansion in Moscow on Friday afternoon.

Armenia said it’s open to holding a ceasefire, while Azerbaijan has made a potential truce conditional on the Armenian forces’ withdrawal from Nagorno-Karabakh, arguing that the failure of international efforts to negotiate a settlement left it no other choice but to try to reclaim its lands by force.

Speaking in an address to the nation, the Azerbaijani president said nearly three decades of international talks “haven’t yielded an inch of progress. We haven’t been given back an inch of the occupied lands.”

“Mediators and leaders of some international organizations have stated that there is no military solution to the conflict. I have disagreed with the thesis, and I have been right. The conflict is now being settled by military means, and political means will come next.”

Fighting with heavy artillery, warplanes and drones has engulfed Nagorno-Karabakh despite numerous international calls for a ceasefire. Both sides have accused each other of targeting residential areas and civilian infrastructure.

Stepanakert, the capital of Nagorno-Karabakh, has been under intense shelling. Residents are staying in shelters, some of which are in the basements of apartment buildings.

On Thursday, a historic cathedral in the town of Shusha in Nagorno-Karabakh came under shelling, a shell piercing its dome and damaging the interior. No one was hurt in the attack, but hours later more shelling wounded two Russian journalists inspecting the damage. The Azerbaijani military denied targeting the cathedral.

According to the Nagorno-Karabakh military, 376 of its servicemen have been killed since Sept. 27. Azerbaijan hasn’t provided details on its military losses. Scores of civilians on both sides also have been killed.

Armenian officials say Turkey is involved in the conflict and is sending Syrian mercenaries to fight on Azerbaijan’s side. Turkey has publicly backed Azerbaijan in the conflict but has denied sending combatants to the region. 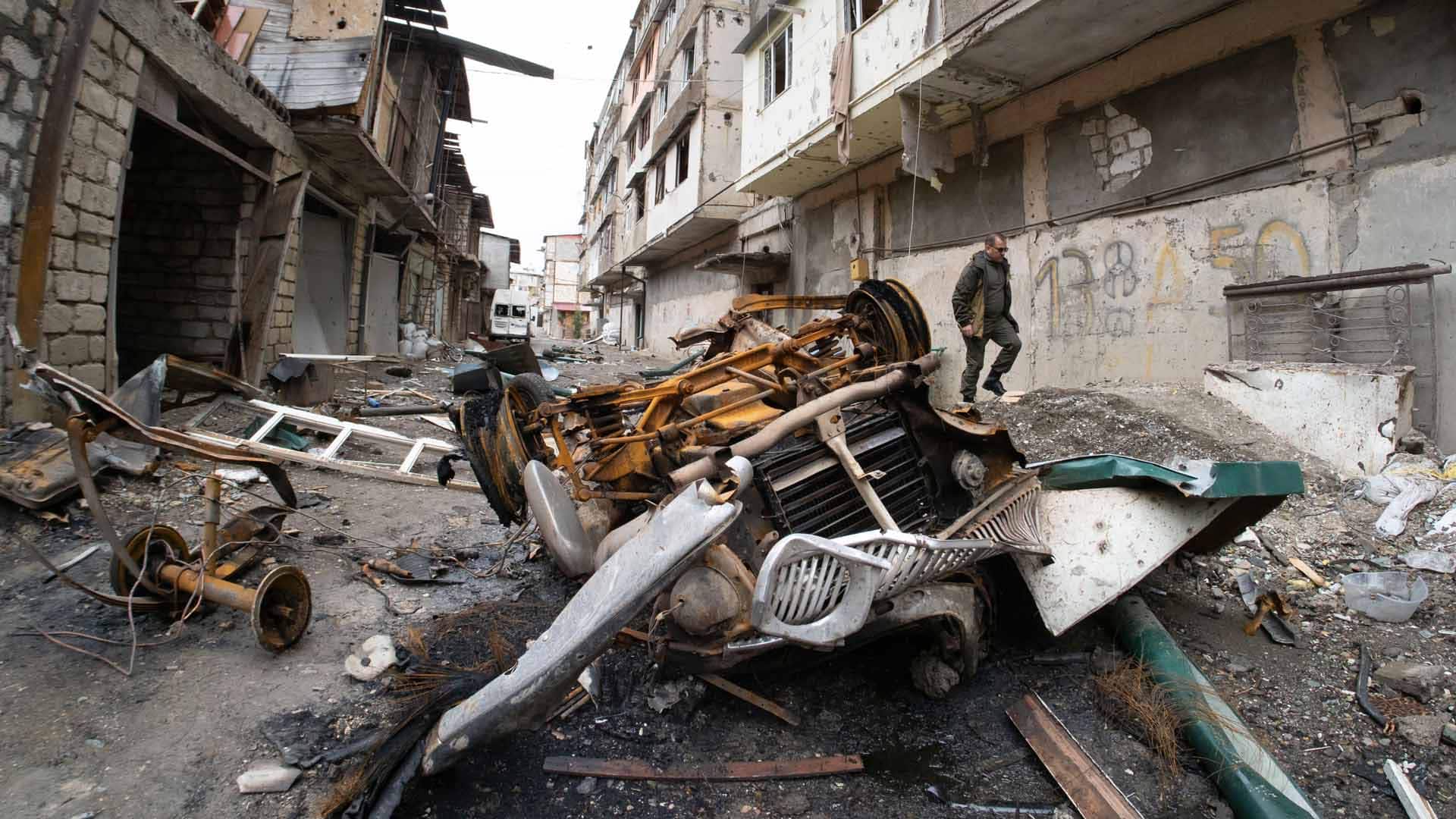 Canada and the U.K. are calling on Armenia and Azerbaijan to cease fighting in the disputed Nagorno-Karabakh region and return to the negotiating table “without any preconditions.” 9:48

In an interview with CNN Arabic aired Thursday, Azerbaijan’s president admitted that Turkish F-16 fighter jets have stayed on in Azerbaijan weeks after a joint military exercise but insisted that they have remained grounded. Armenian officials had earlier claimed that a Turkish F-16 shot down an Armenian warplane, a claim that both Turkey and Azerbaijan have denied.

Aliyev’s office said French President Emmanuel Macron called him Friday to discuss the conflict but wouldn’t give any details of the conversation. The call followed Macron’s conversation with the Armenian prime minister late Thursday.

Macron’s office voiced hope that a truce could be negotiated soon, noting that it was co-ordinating its efforts with the Kremlin.