Rural areas ‘could miss out on 5G’: Plans for technology rollout could create ‘not-spots’ with no coverage, MPs are warned

Rural areas face being left behind in the introduction of 5G technology, MPs are warning.

Plans to target 5G at most of the population rather than most of the country could create ‘not-spots’ as with older mobile technology, they said.

A report by the Commons digital, culture, media and sport committee called for more to be done by the Government to ‘ensure that rural areas do not get left behind’.

Committee chairman Julian Knight said the current strategy ‘risks repeating the same errors that led to mobile ”not-spots” with investors cherry-picking areas of high population and leaving people in remote…areas without a hope’.

Plans to target 5G at most of the population rather than most of the country could create ‘not-spots’. (Stock image)

The introduction of 5G technology began last year, offering faster speeds and the ability to handle larger amounts of data.

The Government’s target to deliver nationwide ultra-fast broadband by 2025 had been treated with ‘no genuine belief’ that it was achievable by the industry, the MPs said.

They added that even the revised target of 85 per cent coverage could be missed because of infrastructure challenges.

Mr Knight said: ‘The Government’s decision to abandon its 2025 gigabit-capable broadband target within weeks of ministers reassuring us of their commitment to it was a belated recognition that it was unrealistic and unachievable, underlining concerns we’d heard from industry.

‘Valuable time has been lost, making meeting even the revised-down target a major challenge.

‘On 5G, the Government’s target to deliver to the majority of the population, rather than the majority of the country, risks repeating the same errors that led to mobile ‘not-spots’ with investors cherry-picking areas of high population and leaving people in remote rural areas without a hope.’ 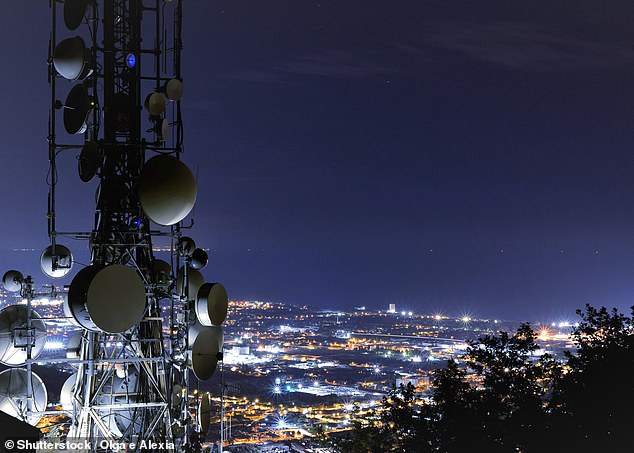 The report called on the Government to do more to ‘ensure that rural areas do not get left behind’. (Stock image)

In 2019, 5G began rolling out in the UK, with the fifth-generation mobile technology predicted to spark a data revolution around the world thanks to its ability to handle larger amounts of data and process it more quickly.

In its recommendations to the Government, the committee urges ministers to outline how likely it considers its 85 per cent coverage broadband target to be met by 2025 and to detail how the remaining £3.8 billion of a £5 billion budget for delivering the high-speed broadband to hard-to-reach areas has been ring fenced.

The committee also encouraged the Government to continue to prioritise those with the worst connectivity during the rollout of new technologies.