She is awaiting the arrival of her very first child.

And Rumer Willis cloaked her bump in style as she treated herself to a freshly squeezed juice in Los Angeles on Thursday.

The actress, 34, who is expecting a child with boyfriend Derek Richard Thomas, was spotted leaving Beverly Hills Juice wearing a chic houndstooth coat over her blossoming midsection.

Maternity style! Rumer Willis cloaked her bump in style as she treated herself to a freshly squeezed juice in Los Angeles on Thursday

The glowing star beamed with happiness as she emerged from the establishment carrying the hydrating concoction.

Beneath her coat, she sported a black top and matching sweatpants.

Her curly hair was styled into a singular braid which draped down her back with a few loose ringlets dangling over her forehead.

Later on Friday, she took to Instagram and shared a photo of her growing baby bump, along with a story about her quest for all things healthy while pregnant.

‘As soon as I found out I was pregnant one of the first things I did health-wise was start looking at what I was putting in my body and on my body, from food to lotions, oils, beverages and especially vitamins. I wanted to find the most natural things I could with the fewest ingredients,’ she wrote in the caption. 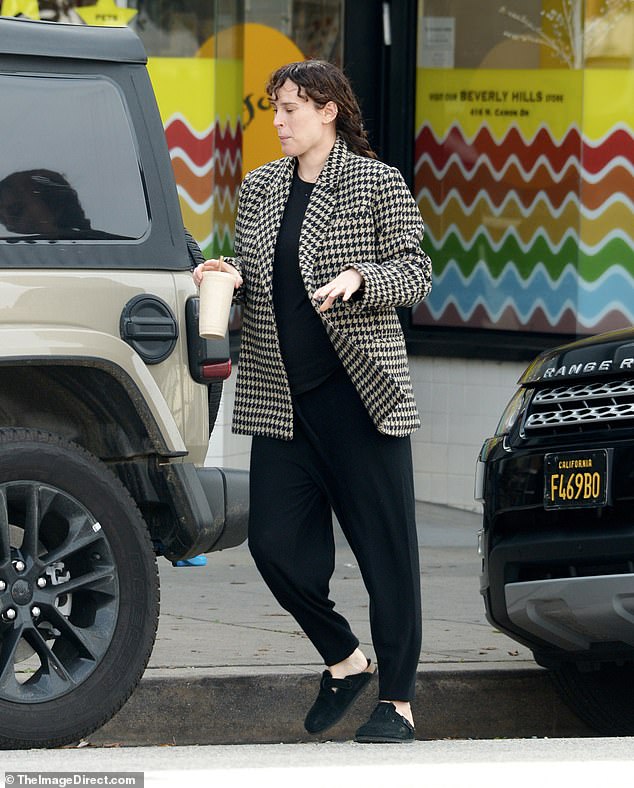 Treating herself! The glowing star beamed with happiness as she emerged from the establishment carrying the hydrating concoction 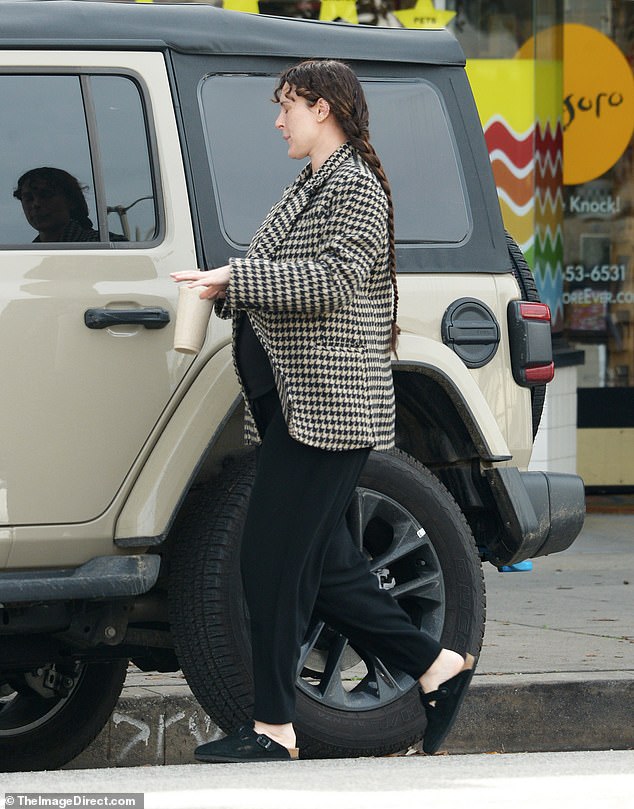 Mom-to-be: Willis’ bump was on full display as she approached her vehicle

The actress continued: ‘I did my research and tried a handful of different prenatal vitamins; some made me feel sick, some didn’t have all the things I was looking for (Choline was missing from quite a few) and just recently discovered @shakleehq Meology Prenatal and decided to give it a try because I was really impressed with the clean ingredients.’

Rumer went public her big pregnancy news last month, posting a photo to her Instagram of her burgeoning bump.

In the announcement, the happy couple posted a series of images that showed the indie musician looking elated as he rested his head on her growing bump.

Demi went on to post a picture from her daughter’s sonogram appointment. 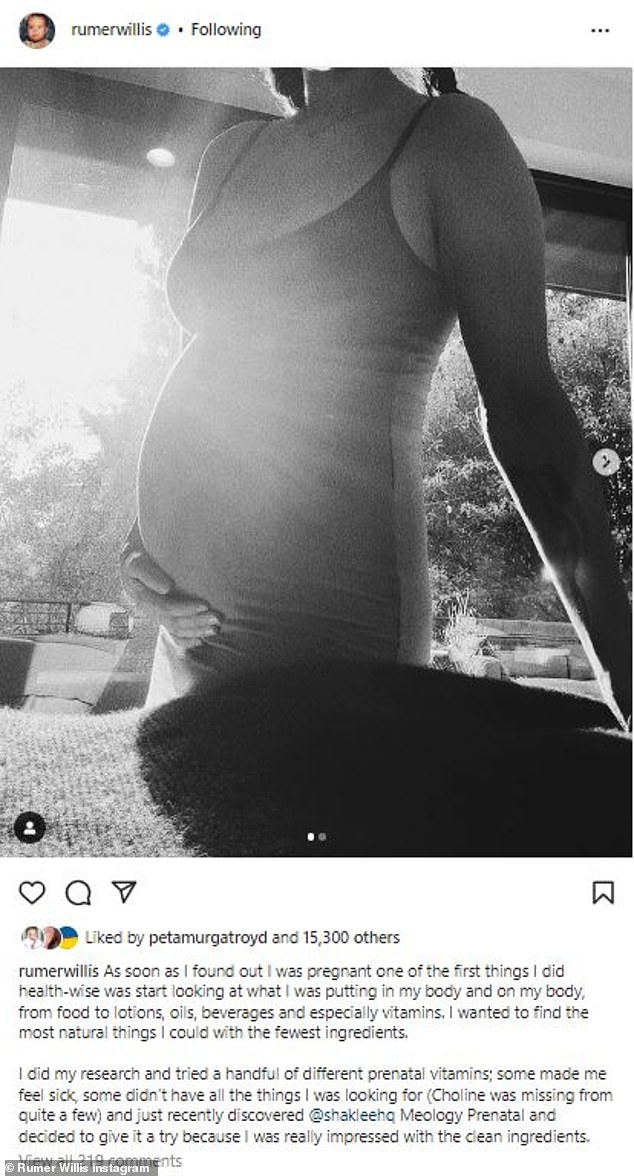 Health seeking: The oldest of Bruce Willis and Demi Moore’s three daughters took to Instagram on Friday and posted a photo of her baby bump 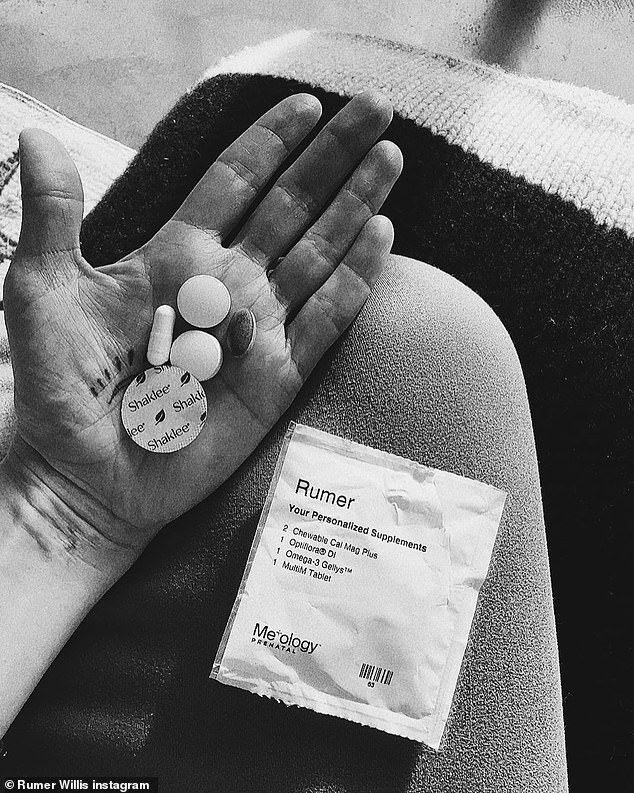 El natural: Rumer also gave her followers a look at some prenatal vitamins she tried out

The Ghost star posed with one of her many small dogs and her two other Willis daughters — Tallulah, 28, and Scout, 31 — while Rumer glowed on an examination chair with her belly exposed.

Bruce Willis and his second wife Emma Heming, 44, also shared a sweet post on Instagram, writing: ‘Baby news is happy news!!! Congratulations @rumerwillis and @derekrichardthomas we are elated over here!’

The Die Hard action icon has been going through a difficult struggle with aphasia, a brain disorder that affects an individual’s ability to speak and understand language. 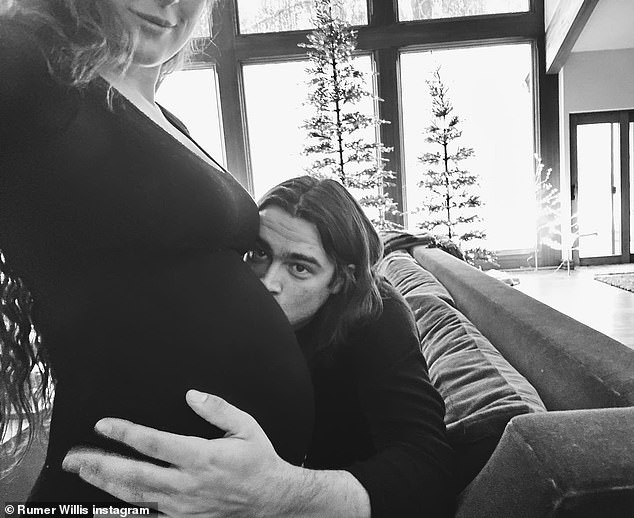 Oh baby! Willis announced she and her boyfriend were expecting their first child together last month

Bruce’s family went public with his diagnosis in March of this year and announced his retirement from acting.

This will be Demi and Bruce’s first grandchild.

The A-listers were one of Hollywood’s ultimate power couples throughout their mutual heyday of the ’90s, tying the knot in 1987 and parting ways in 2000. Expanding family! The Ghost star posed with one of her many small dogs and her two other Willis daughters — Tallulah, 28, and Scout, 31 — while Rumer glowed on an examination chair with her belly exposed