The rudder of warship HMS Invincible has been discovered 200 feet away from the main shipwreck – over 40 years after the wreckage was first located.

Its 36-foot-long blade was discovered lying on the bed of the Solent during a routine inspection by marine archaeologists last week.

It is due to be covered in sandbags to protect it from further erosion, but it is yet to be decided whether it will be financially viable to bring it above ground.

The ship was built by the French in 1744, but was captured by the British during the Battle of Cape Finisterre three years later.

It sunk in 1758 when the rudder jammed and it ran aground on a sandbank between Langstone Harbour and the Isle of Wight, before capsizing three days later. 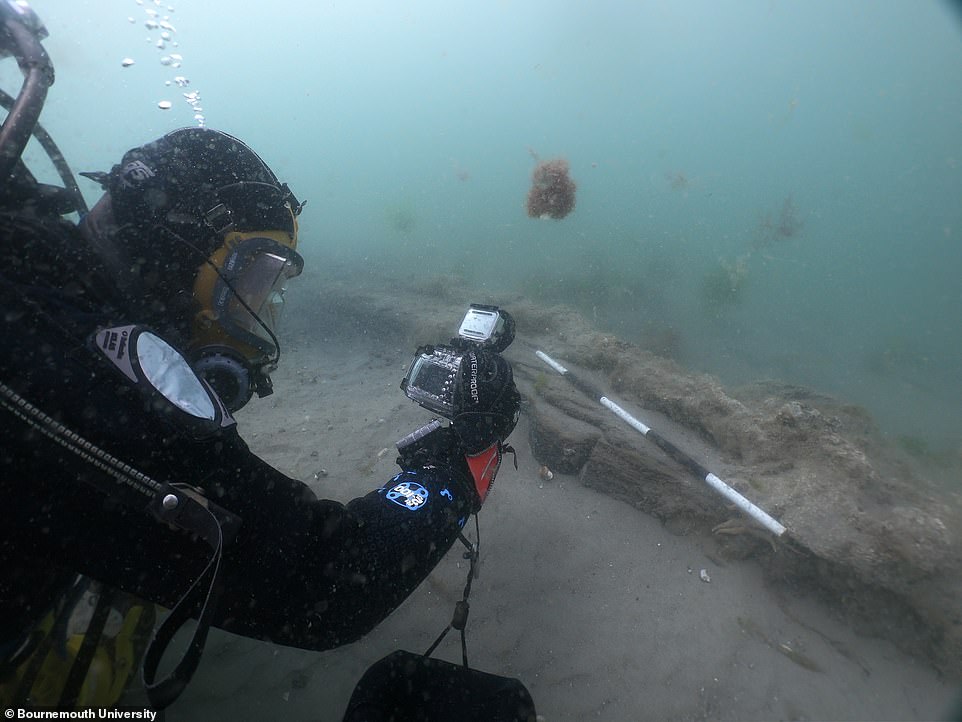 The 36ft-long blade was the reason for the warships demise, after it struck a sandbank between Langstone Harbour and the Isle of Wight in 1758 and capsized three days later

The fascinating history behind HMS Invincible

Originally L’Invincible, the 74-gun ship was built in south west France on the banks of the River Charente at Rochefort in 1744

It was designed to fight all around the world, protecting France’s overseas empire and merchant fleets

But its career in the British Navy also came to an unexpected end on February 19, 1757

The wreck, which is three nautical miles from Portsmouth, Hampshire, was first discovered by a fisherman in shallow 25ft waters 40 years ago

There, the wreckage remained for 222 years, until a fisherman brought up some unusual timber after snagging his nets on a sandbank.

Divers then went down to explore the site three nautical miles from Portsmouth, Hampshire, and identified the wreck as HMS Invincible.

The following year it was designated a Historic Shipwreck under the Protection of Wrecks Act 1973, and has been studied ever since.

Dan Pascoe, a marine archaeologist from Bournemouth University, said: ‘Since 2010 we have conducted several surveys of the seabed, and we noted several anomalies 60 metres off the stern of the boat, which I suspected could have been the rudder.

‘Since then, natural erosion of the sand covering it has meant that the object has become more visible.

‘In subsequent dives we noticed that it looked more like a rudder in its shape.’

Dan Pascoe added: ‘In terms of next steps, in the short term we are going to bury it in sandbags to protect it from damage, and in the long term our team are looking into the possibility of whether it can be brought to the surface and stored safely.’

A new excavation project on the site of the wreckage was initiated by Poole’s Maritime Archaeology Sea Trust (MAST) and Bournemouth University in 2017. 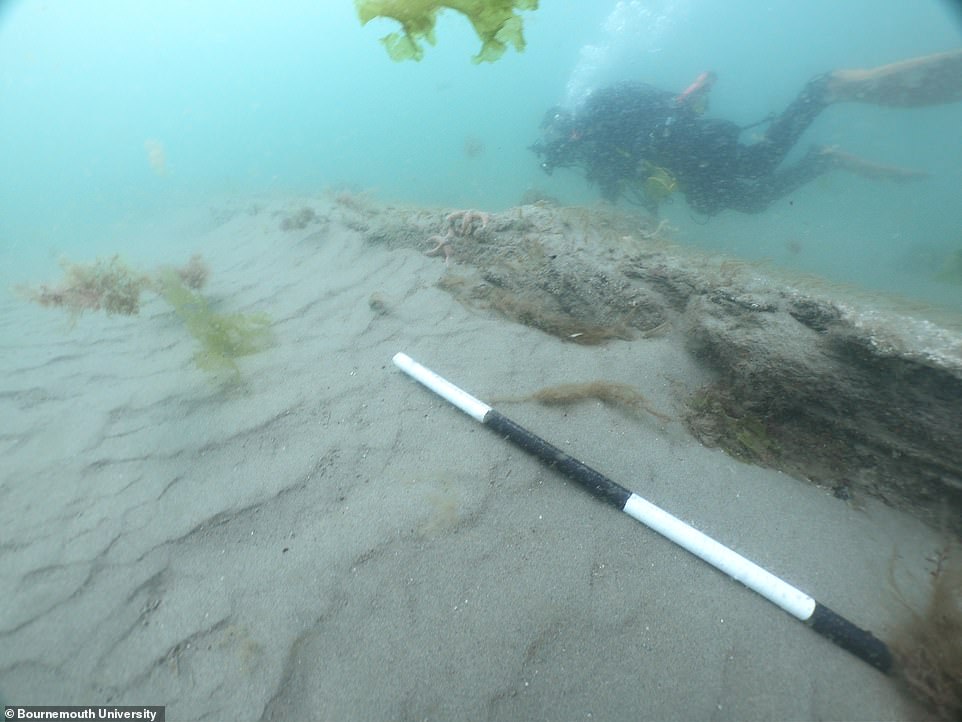 Marine archeologists  conducted several surveys of the seabed since 2010, and noted several anomalies 200 feet off the stern of the boat which they suspected could have been the rudder. Over time, erosion of the sand covering the rudder meant the object became more visible 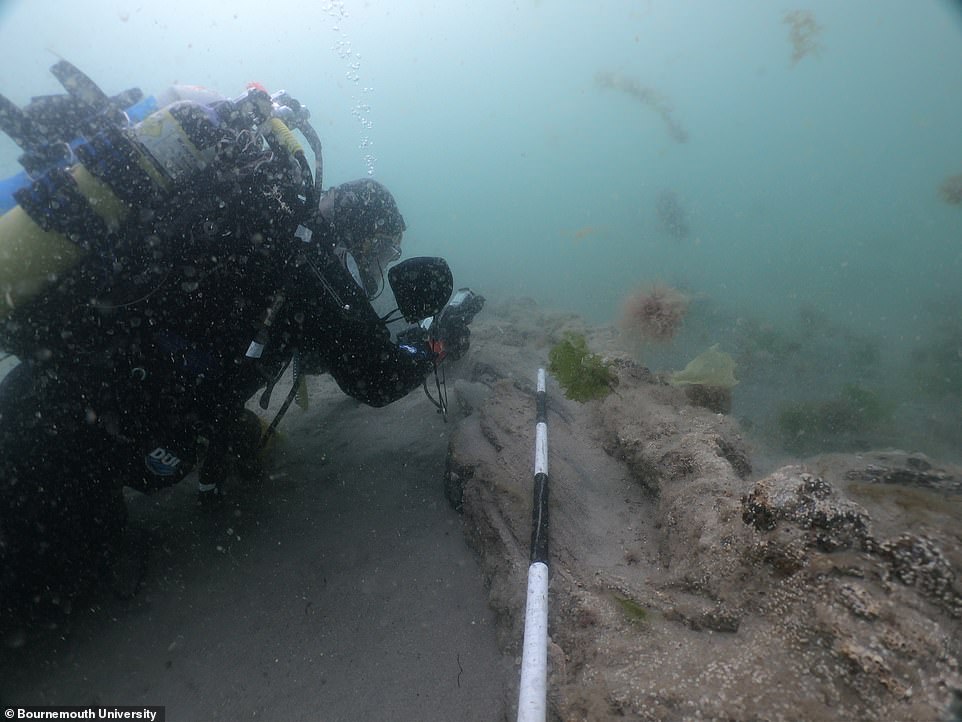 The rudder is due to be protected with sandbags to prevent any further erosion while its submerged, but bringing it to the surface could prove costly

This was prompted after changing sea bed levels left it more exposed to the elements, leading to fears the relics could deteriorate

It involved 1,458 dives taking place over two years, during which nearly 2,000 artefacts were recovered.

The array of new finds, including the ship’s enormous cutwater, are now on display at the National Museum of the Royal Navy in Portsmouth.

Other significant artefacts included a gun port lid and a collection of swivel guns, some with their tillers and mounting intact.

There were also many other small finds, including cutlery, a bottle of corked rum and regimental buttons. 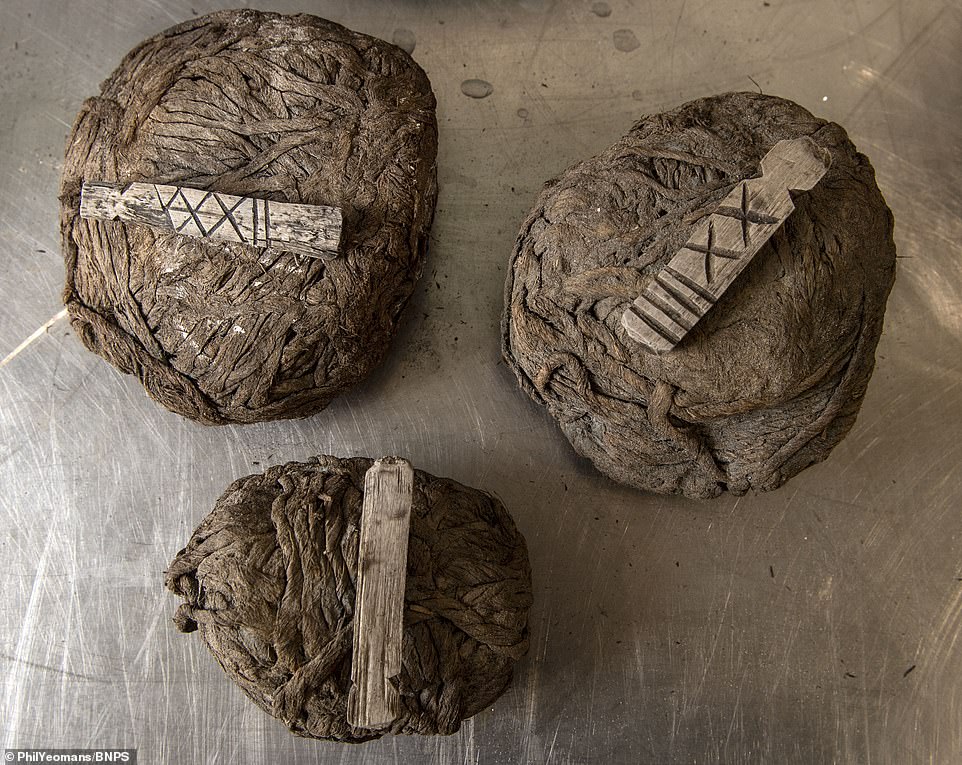 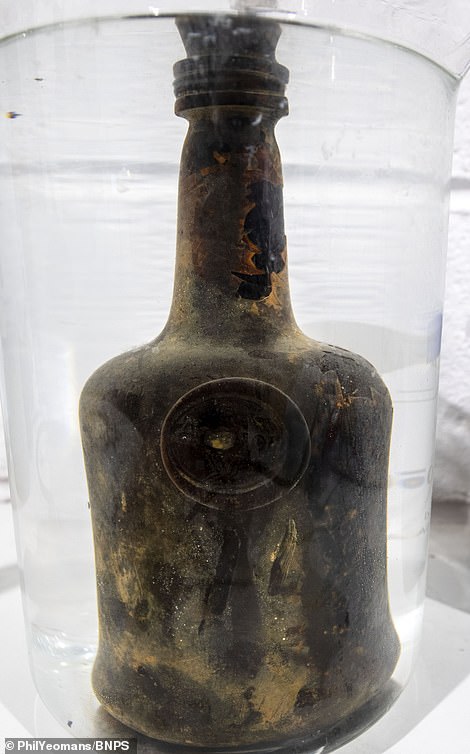 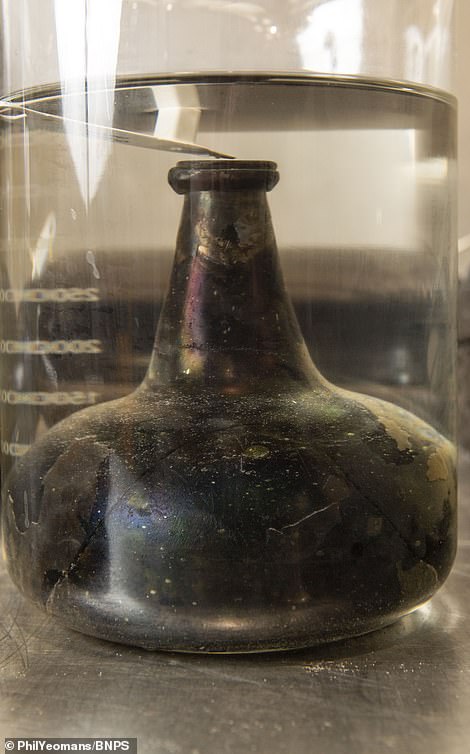 Several bottles of what appears to be wine or spirits were recovered from the shipwreck during the excavation project between 2017 and 2019, some with corks still intact 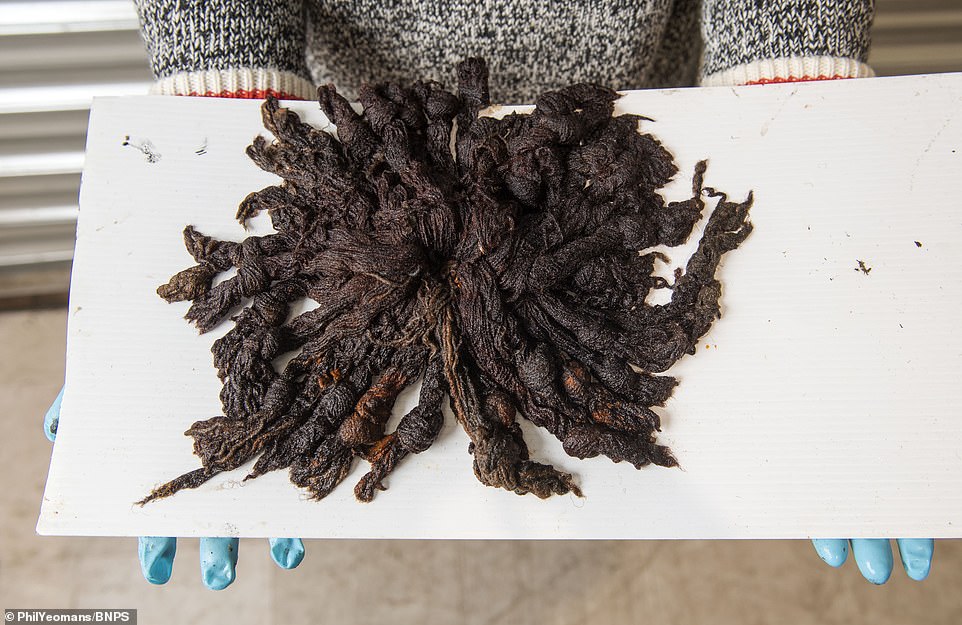 Originally L’Invincible, the 74-gun ship was built in south west France on the banks of the River Charente at Rochefort in 1744.

It was designed to fight all around the world, protecting France’s overseas empire and merchant fleets.

The HMS Invincible’s service in the French Navy was cut short as it was captured by a superior British Royal Navy fleet commanded by Admiral Anson at Cape Finisterre in 1747.

But its career in the British Navy also came to an unexpected end on February 19, 1757.

The HMS Invincible was given orders to weigh anchor and begin the voyage to Louisbourg (modern day Nova Scotia) to fight the French.

But a series of calamitous events led to her wrecking on a shallow sand bank known as Horse Tail Sand in the Eastern. 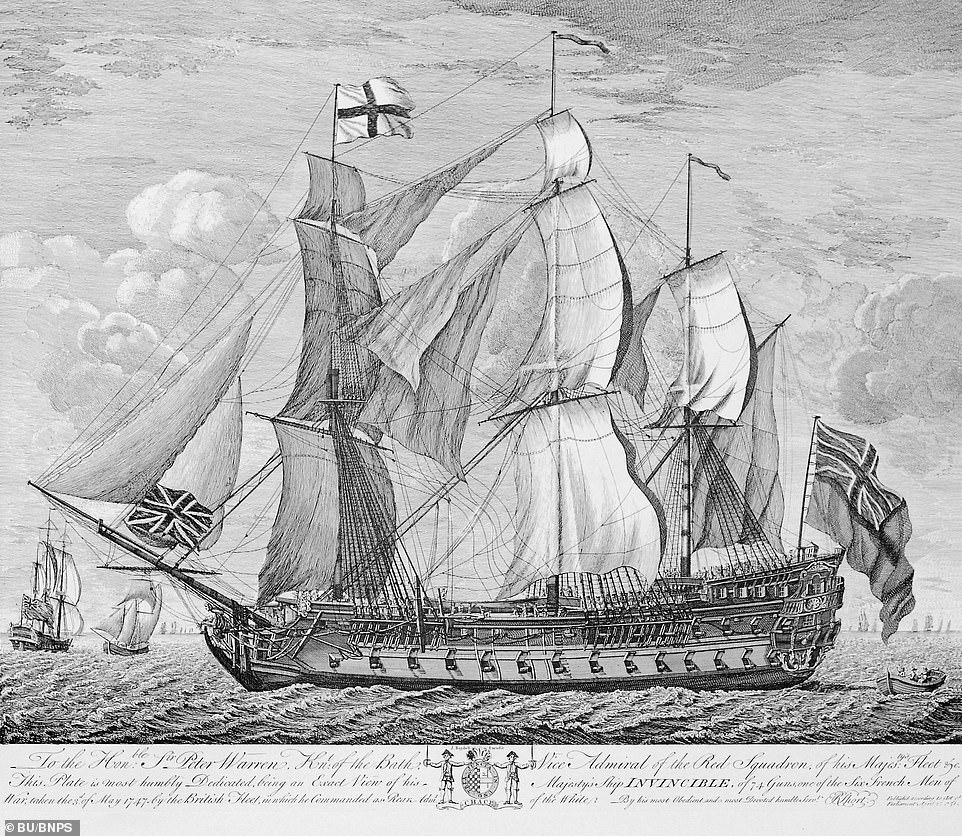 According to maritime archaeologist Dan Pascoe, the HMS Invincible’s revolutionary streamlined design was copied by the British who adopted it on their ships up until the Battle of Trafalgar in 1805

What happened in the Battle of Cape Finisterre?

On 14 May 1747, during the War of the Austrian Succession, Invincible was escorting a convoy of merchant ships through Cape Finisterre in Spain.

The French warship was then spotted by the British channel fleet of 16 ships, who gave chase.

Invincible attacked the British ships in order to give its convoy a chance to escape.

After engaging six warships alone, most of the crew were left dead or wounded, so the French surrendered.

The French Commander, Saint-Georges, handed his sword to Admiral George Anson in defeat.

The Royal Navy immediately sailed Invincible to Portsmouth Naval Dockyard, and used its measurements as a blueprint for all future Royal Naval 74 gunships.

Realising the significance of his discovery Mr Mack teamed up with Commander John Bingeman, who had previous experience of investigating shipwrecks of the Royal Navy.

Due to its importance it was designated as an historic wreck in 1980, under the Protection of Wrecks Act 1973.

Commander Bingeman and Mr Mack led excavations between 1980 and 1991, discovering the port side was intact with vast quantities of well-preserved artefacts inside.

In 2010, Mr Pascoe became the licensee and archaeologist of the site and found the wreck was uncovering due to parts of the ship being exposed by changing seabed levels.

This led him to survey the newly exposed areas of the wreck and to monitor the decreasing sediment levels.

Consequently the site was placed at High Risk on Historic England’s Heritage at Risk Register.

This work brought the site’s attention to Professor Dave Parham of Bournemouth University and Jessica Berry of MAST, as well as the National Museum of the Royal Navy.

They, alongside Mr Pascoe, realised the need for an excavation project to rescue and record vulnerable material before its demise.

Today, the HMS Invincible represents the most complete and best-preserved remains of a warship from the mid-18th century.