The RSPCA criticised a family for bringing their kitten to a packed Bournemouth beach on the hottest day of the year.

The animal charity received several reports from concerned beachgoers of the small black and white cat out on the beach in 92F (33.3C) degree heat, as thousands of Britons flocked to the south coast hotspot on Thursday.

When the family were approached by RSPCA authorities about the kitten, it transpired that the family lived 100 miles away from Bournemouth beach and they were ordered to take him home straight away.

A family took their black and white kitten (pictured) to Bourenemouth beach in the hottest day of the year. The RSPCA slammed the decision to drag the animal to the beach in 92F (33.3C) degree heat 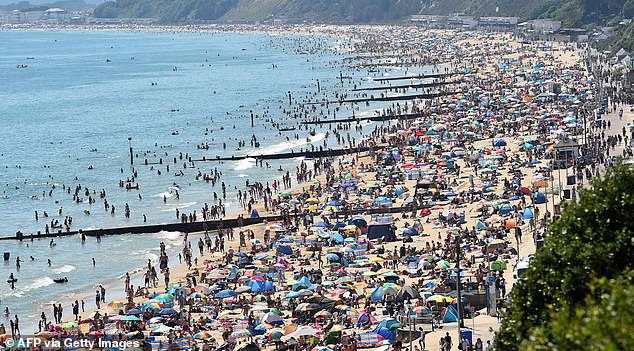 Thousands of beachgoers went to the beach on Thursday, with emergency services declaring that the beach was the scene of a ‘major incident’

RSPCA Inspector Graham Hammond said on Friday: ‘I’ve been an inspector for quite some time, and have seen all sorts of things but when I saw this kitten on the beach, I thought ‘I’ve seen it all now!’

‘The beach was packed and it’d been really difficult even finding parking and getting through the crowds.

‘When I asked the family – who’d travelled around 100 miles from their home that morning to come to Bournemouth for a day trip – why they’d brought the kitten with them they told me the kids didn’t want to leave him.’

The incident involving the kitten was one of 72 incidents reported to the RSPCA concerning animals out in the heat, while 191 complaints of how their animal was feeling in heat have been reported to the animal charity in the last five days.

The RSPCA recommends that on hot summer days, animals should ideally be taken out in public either early in the morning or late at night.

Inspector Hammond added: ‘I also spoke with three other people in the space of just 15 minutes, who were walking their dogs on the promenade in the blistering heat. 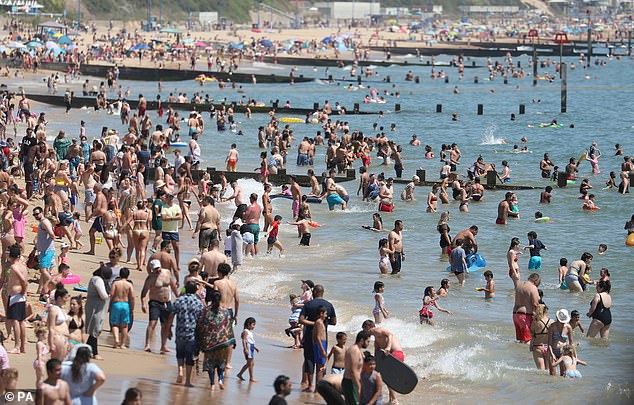 ‘I’d plead with people not to go out and about with their dogs in this hot weather and, instead, to keep them cool at home and in the garden.

‘It’s best to take dogs for walks and plan any rides on horses early in the morning and late in the evening – avoiding the hottest parts of the day – and to ensure they have constant access to shade, cool areas of the house and lots of fresh water.’

The shocking scenes on Bournemouth beach were described as a ‘major incident’ by emergency services, who were ‘stretched to the absolute hilt’ by the beachgoers.

Around 33 tonnes of litter has been removed from the beaches on Thursday and there has been illegal camping, littering, anti-social behaviour – including drunken fights among beachgoers – and gridlock on the roads.