Electronic goods distributor RS Group has seen interim earnings jump by a third thanks to rising orders of industrial products and price hikes.

Profits were driven by a 16 per cent increase in like-for-like revenues, buoyed by strong online trade and purchases of industrial products outperforming the broader market.

The strength of the results was not enough to improve investor sentiment, however, as shares dived on news CEO Lindsley Ruth will be taking a leave of absence.

Turnover received a further boost from beneficial currency movements and demand for the firm’s RS Pro own-brand offering and electronics despite weaker sales of semiconductors and passive components.

The Americas saw the largest expansion in revenue, growing by 38 per cent to £461million with an 80 per cent bounce in operating earnings.

There was also healthy growth in the British Isles, which the business credited to rising prices and digital orders, and a greater focus on higher-value B2B clients.

RS Group said that trading in the opening four weeks of October had been aligned with forecasts, even with a more challenging economic environment impacting consumers and companies.

However, it noted that onerous lockdowns in China and weaker volumes of single-board computing products were continuing to hit demand in the Asia-Pacific region.

David Egan, the firm’s financial boss, said: ‘We continue to invest in our group to become stronger, more profitable and to take greater market share. While mindful of a slowing economic backdrop, we remain optimistic that we will continue to outperform the market.’ 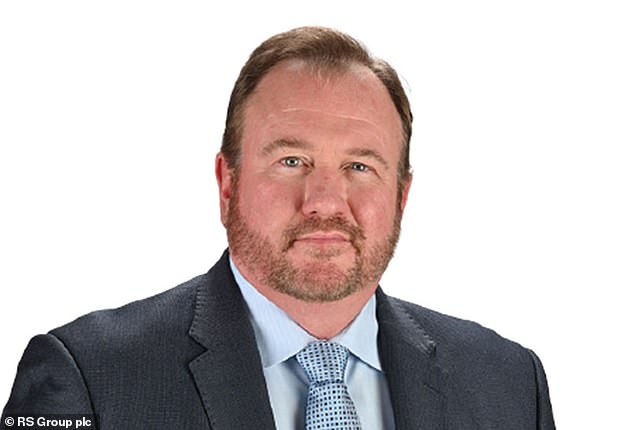 RS Group said its chief executive Lindsley Ruth (pictured) would be taking a leave of absence for ‘personal reasons.’

The London-based electronics supplier declared that Egan had assumed the chief executive position on a provisional basis due to Lindsley Ruth taking a leave of absence for ‘personal reasons’.

This is the second time American-born Ruth has taken time off from running RS Group, having briefly stepped aside in late 2019 to receive treatment for a medical condition.

In an interview with The Times in April, he blamed the deterioration of his health on ‘doing the work of 20’ people rather than properly delegating tasks to his employees.

RS Group gave no reason for him going on leave this time, although Baroness Rona Fairhead, the firm’s chair and former BBC Trust head, assured investors that RS Group ‘will maintain good momentum in the business’.

She added: ‘The company has established a strong position for continued growth, with fantastic people and a clear strategy which resonates with our customers and suppliers and delivers consistent gains in market share.’

RS Group shares were the second-biggest faller behind BT Group on the FTSE 100 Index on Thursday, dropping by 7.8 per cent to £8.81.

Founded in 1937 as Radiospares by two European emigrés, RS Group began life making and selling spare parts for radios, then doing the same for televisions after World War II.

During the mid-1960s, it expanded its reach towards industrial customers and listed on the London Stock Exchange under the name Electrocomponents.

RS Group eventually transitioned into just being a distributor of other firms’ electrical and industrial goods, launched its website in 1998 and expanded its reach into the USA with the acquisition of Allied Electronics.

Trading was badly impacted by Covid-related lockdowns two years ago, but began to recover well as restrictions were loosened and it bought up smaller rivals like Synovos and Needlers.