William, Kate and other royals WON’T be going to church in Sandringham on Christmas Day for first time in 32 years to keep crowds away during Covid pandemic

William, Kate and other royals will not be attending church at Sandringham on Christmas Day for the first time in 32 years due to the coronavirus pandemic, police have revealed.

Norfolk Police today released a statement confirming that ‘no members’ of the Royal family will be at the traditional service at St Mary Magdalene Church.

William and Kate will stay away even though they are spending the festive break at their country home Anmer Hall which is just two miles away.

Police broke with convention to make the announcement to try and persuade members of the public to stay away from the church on Christmas Day.

Norfolk Police confirmed no royals will be attending the traditional church service in Sandringham this year, breaking a 32-year tradition. Pictured: Prince William and wife Kate, and Prince Harry and wife Meghan arrive at the Sandringham service in 2017

Thousands of loyal fans normally pack into the paddock beside the church to watch the Queen and other members of the Royal family attend the 11am service.

But they are being advised to keep away this year due to the risk of Covid-19 spreading among crowds gathering for a glimpse of the Royals.

The Norfolk Police statement said: ‘Members of the public and media are advised there will be no organised royal event at Sandringham this year.

‘Members of the Royal Family will not be attending the usual Christmas Day service.’ 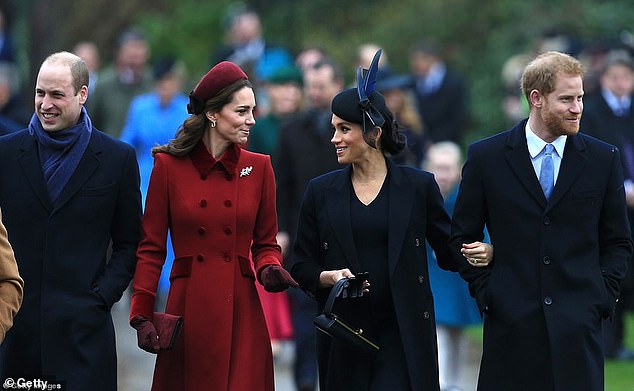 William and Kate will stay away from the Sandringham church service even though they are spending the festive break at their country home Anmer Hall, just two miles away. Pictured: Prince William and wife Kate, and Prince Harry and wife Meghan arrive at the Sandringham service in 2018

It was revealed at the start of December that the 94-year-old Queen and Prince Philip, 99, will be spending Christmas quietly at Windsor Castle instead of Sandringham.

The Sandringham Churches website confirms that the Christmas Day service is going ahead at the church with two metre social distancing between worshippers and no singing.

But it is expected that only regular local members of the congregation will be admitted, and they will be required to use hand sanitiser on entering and leaving.

Anyone who wants to attend is being asked to contact the church warden in advance. 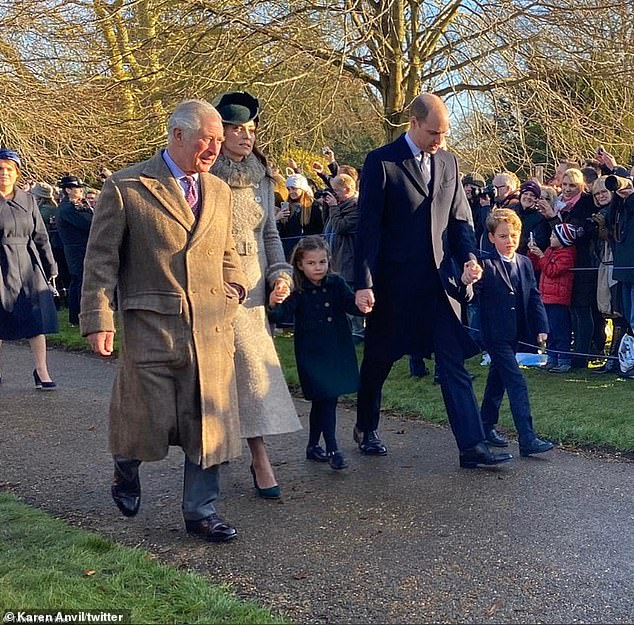 Royal fans normally pack into the paddock beside the church to watch the Queen and other members of the Royal family attend the 11am service. Pictured: Prince Charles, Kate Middleton, Princess Charlotte, Prince William and Prince George attend the service in 2019

The Royal family have spent Christmas at Sandringham every year since 1988 when they moved festivities to Norfolk due to Winsor Castle being rewired.

Normally the Queen is driven to the service in her maroon-coloured Bentley while other family members walk a quarter of a mile to the church from Sandringham House.

Last year Prince George and his sister Princess Charlotte mingled with crowds as they attended the service at the 18th century church for the first time.