The Royal Navy has deployed nine vessels to shadow a fleet of Russian warships in the English Channel and North Sea just weeks after Putin sent bombers toward UK airspace.

The Navy completed the concentrated operation after recording unusually high levels of activity in waters around the UK.

These were also accompanied by RFA Tideforce, RFA Tidespring and HMS Echo for the large-scale operation with support from NATO allies.

Lieutenant Nick Ward, HMS Tyne’s Executive Officer, said: ‘As the Armed Forces are helping the NHS save lives in the UK, it’s essential the Navy continues to deliver the tasks we have always performed to help keep Britain safe.

‘This is very much part of routine business for HMS Tyne and represents one of the many roles our patrol vessels perform in support of the Royal Navy’s commitments.

‘This is our core business and represents an enduring commitment to uphold the security of the UK.’ 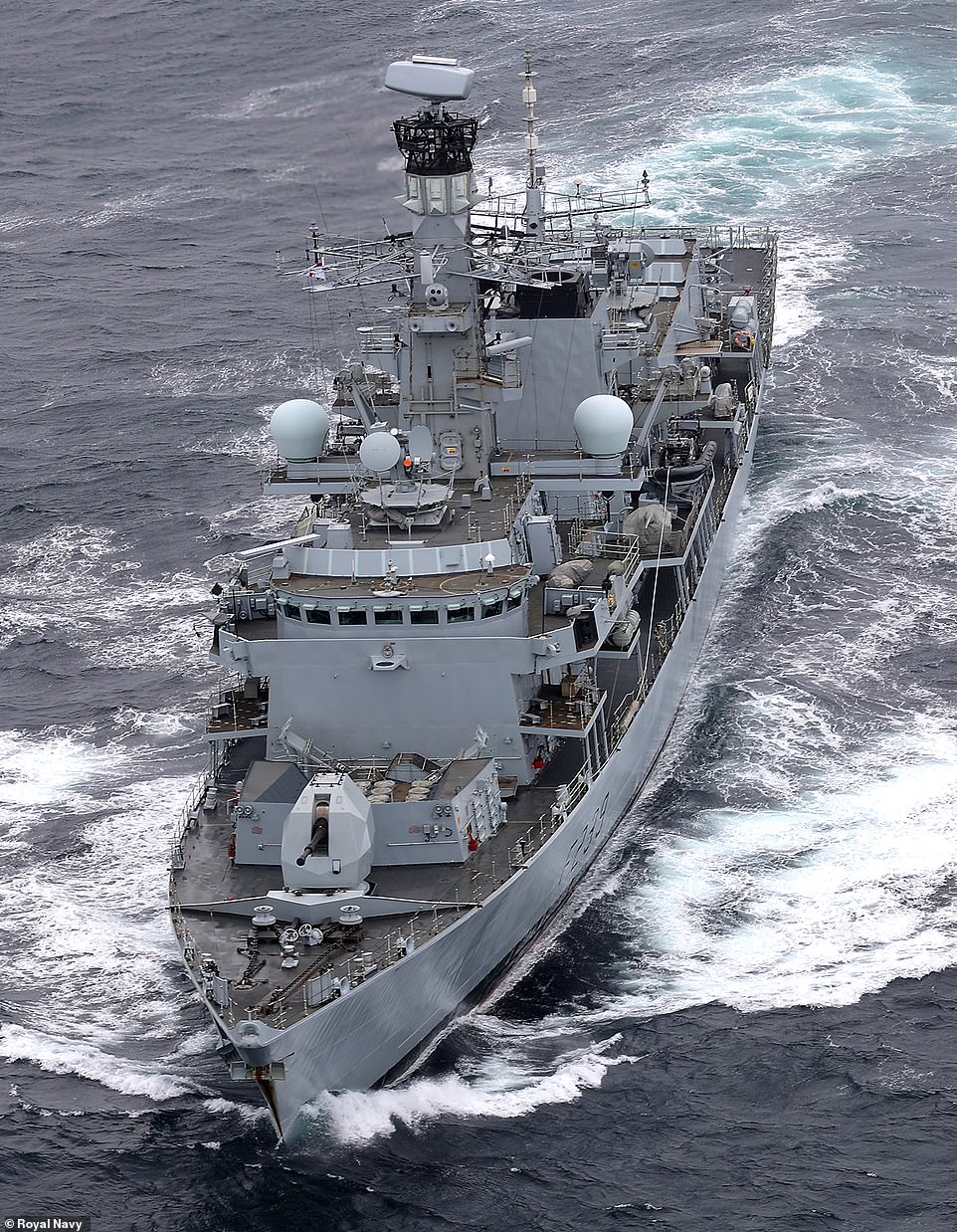 The Navy completed the concentrated operation after recording unusually high levels of activity in waters around the UK. Pictured: HMS Richmond (stock image) 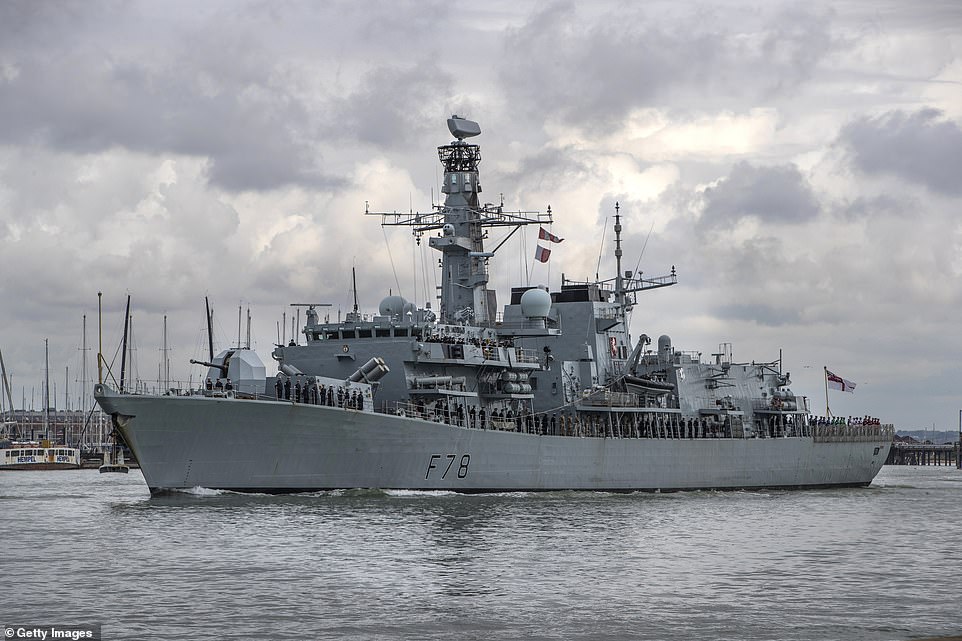 The HMS Tyne is one of the three River-class patrol ships built to safeguard the fishing stocks.

She is one of the busiest vessels in the fleet and spends nine out of every ten days of the year at sea.

HMS Tyne, along with HMS Severn and HMS Mersey make up the Fishery Protection Squadron – the ‘Cod Squad’ – the oldest unit in the Royal Navy.

Role: Inspects around 400 vessels on average per year

The operation was supported by Merlin and Wildcat helicopters of 814 and 815 Naval Air Squadrons.

Royal Navy sailors and aircrew both monitored the Russian ship activity using state-of-the-art radar, surveillance cameras and sensors which allowed them to track their course and speed as they passed the British Isles.

Portsmouth-based HMS Tyne spent more than a week working in the English Channel, in often challenging seas, keeping a close eye on the Russian vessels as they pass the south coast.

HMS Sutherland, fresh from a demanding period of Arctic training on Exercise Cold Response, watched over the Russian presence as part of her duties with NATO’s Standing NATO Maritime Group One – a very high readiness task group made up of frigates and destroyers which patrols northern European waters to provide a reassuring presence.

The Devonport-based frigate’s Merlin helicopter carried out a number of intelligence-gathering sorties over the Russian ships as they passed through the Channel. 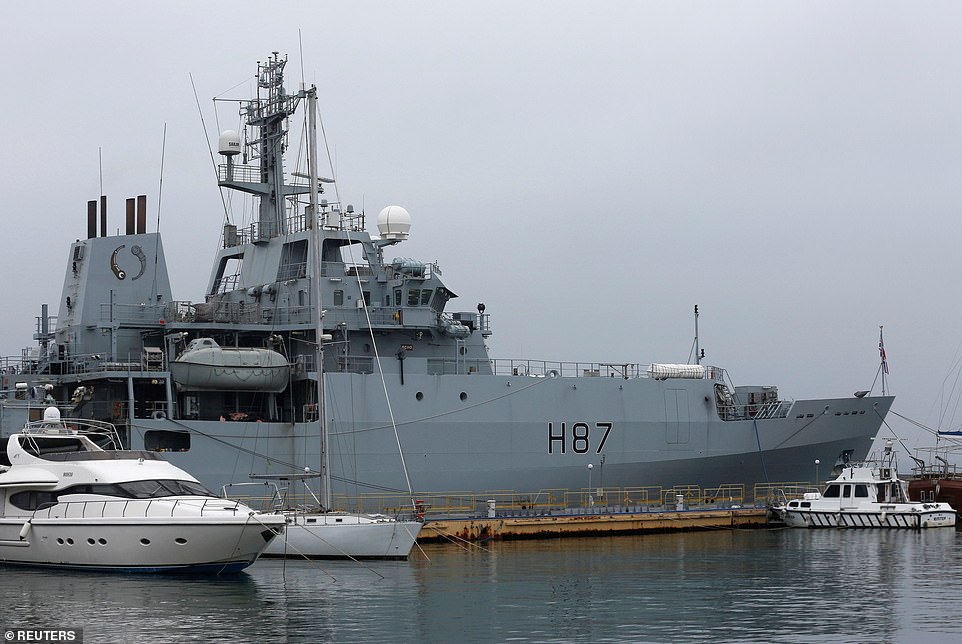 The Royal Navy is currently preparing to help the NHS and other government departments deal with the response to the coronavirus outbreak. Pictured: HMS Echo (stock image)

‘Having proved we can work together and contributed once again to NATO operations, we now look to return to UK national tasks in support of the very highest defence priorities.’

HMS Sutherland, working alongside French, Norwegian, German and Danish ships, then carried out surface and air defence exercises as well as carrying out joint gunnery training.

The Royal Navy is currently preparing to help the NHS and other government departments deal with the response to the coronavirus outbreak.

It comes after RAF Typhoons were repeatedly scrambled in recent weeks to intercept Russian aircraft encroaching on UK airspace.

For the third time in a week, RAF Typhoons were scrambled to intercept Russian aircraft encroaching on UK airspace.

Two jets were launched from RAF Lossiemouth just after 9am. The activity was first noted by Twitter account @MIL_Radar.

A Voyager tanker plane was also launched from RAF Brize Norton, Oxfordshire, in case the Typhoons needed to refuel. 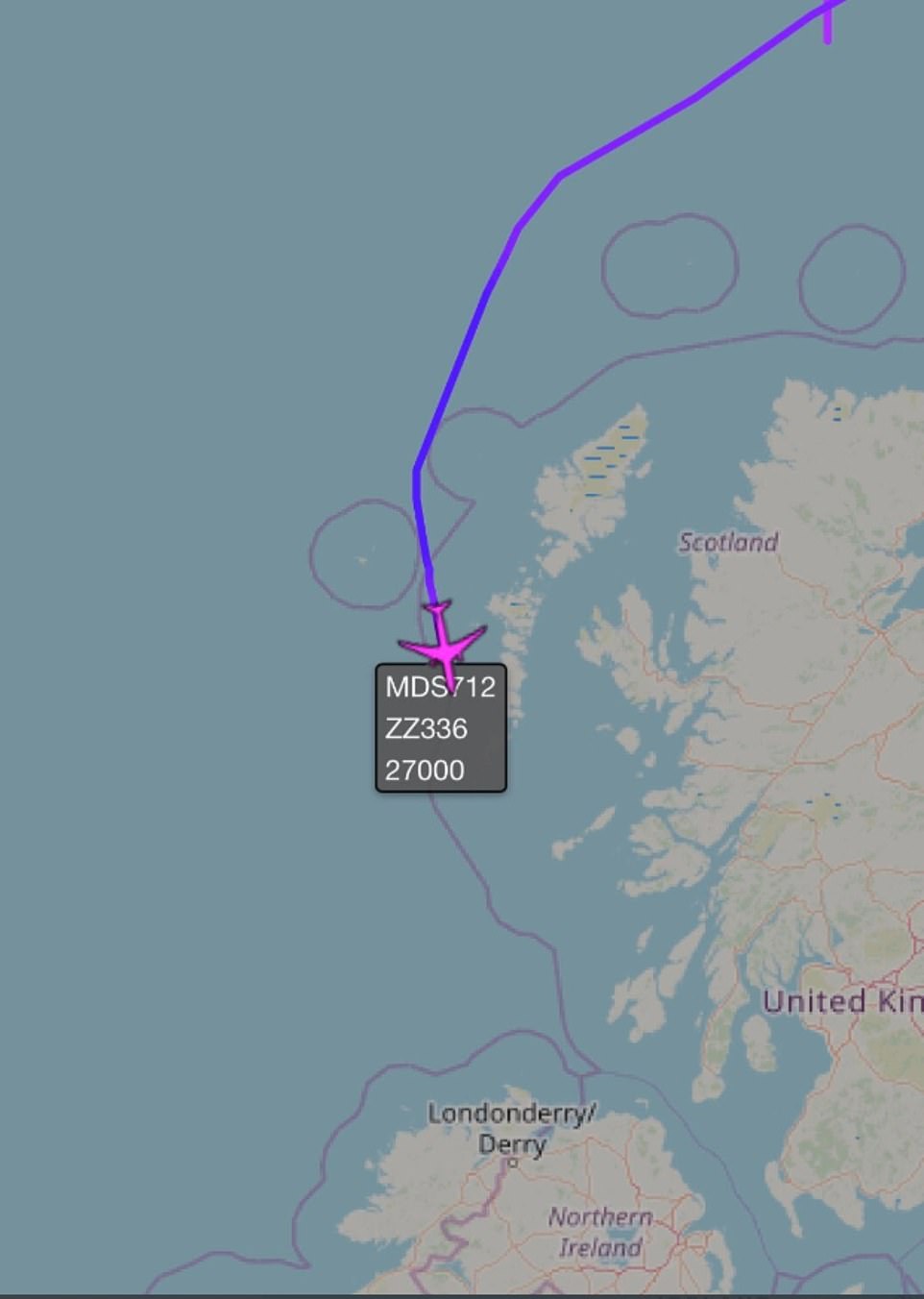 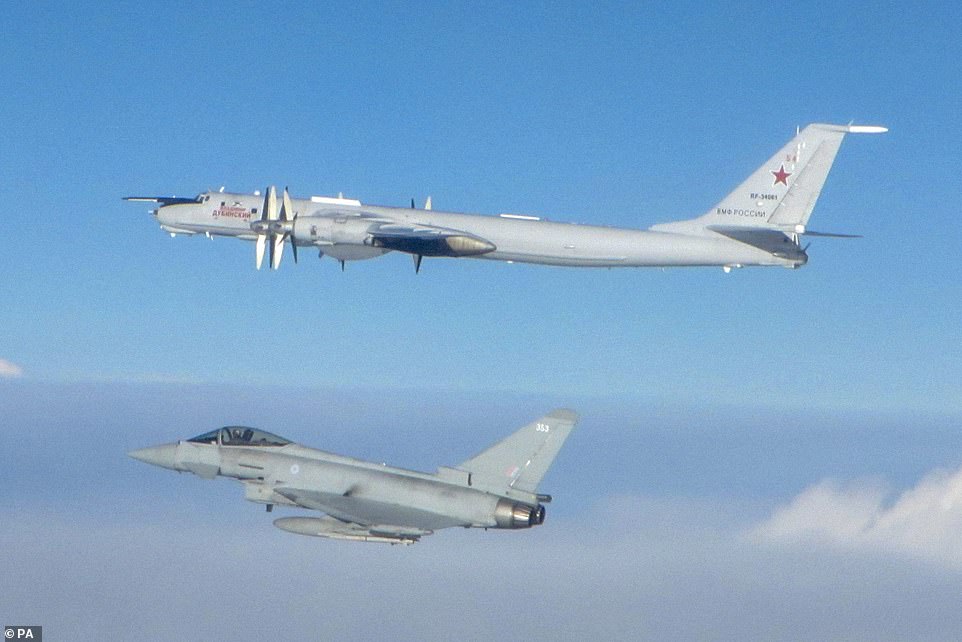 Air Chief Marshal Mike Wigston said: ‘These Russian bombers do not comply with international air traffic rules, are a hazard to airliners and are not welcome in our airspace.’

An unnamed RAF quick reaction alert pilot from RAF Lossiemouth, who intercepted the Russian Bears yesterday, said: ‘The UK has some of the busiest airspace in the world and civilian airliners are constantly using the airways in this area, so our presence ensured UK air traffic controllers could continue to manage this busy airspace around the hazard of the Russian activity.’

This comes after six RAF fighter jets were scrambled to intercept Russian bombers on Saturday after they tried to enter British airspace. 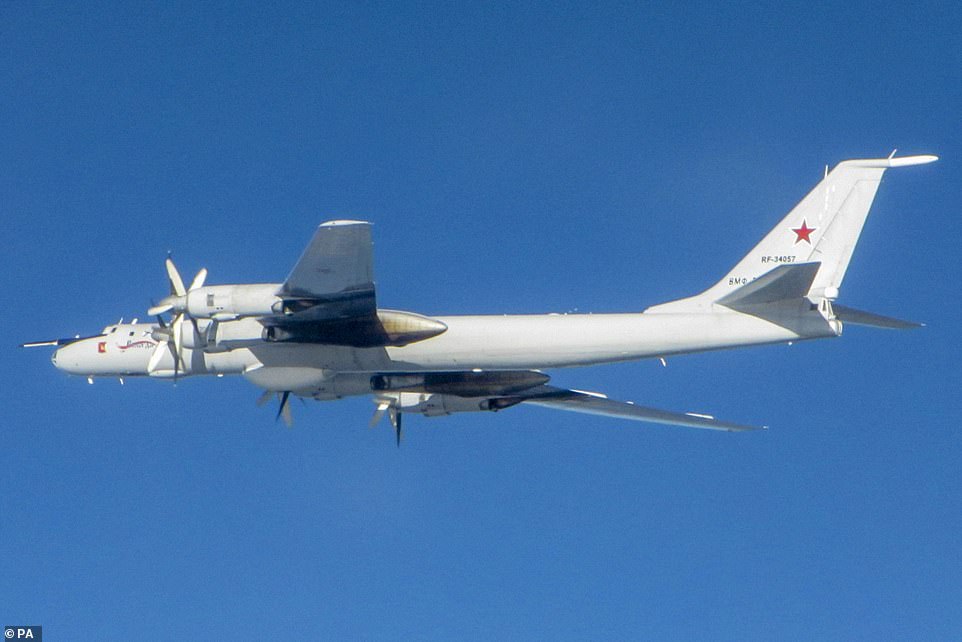 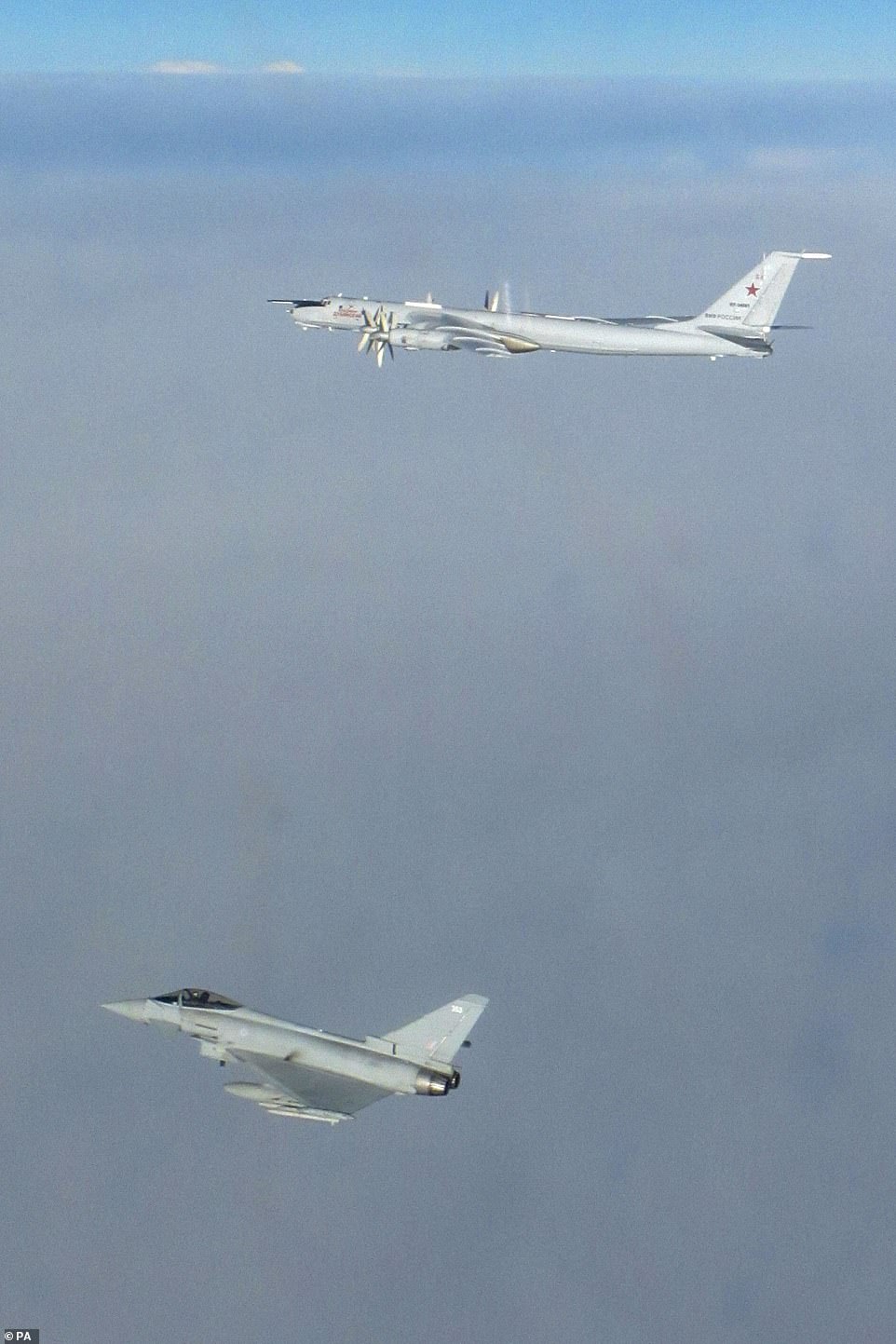 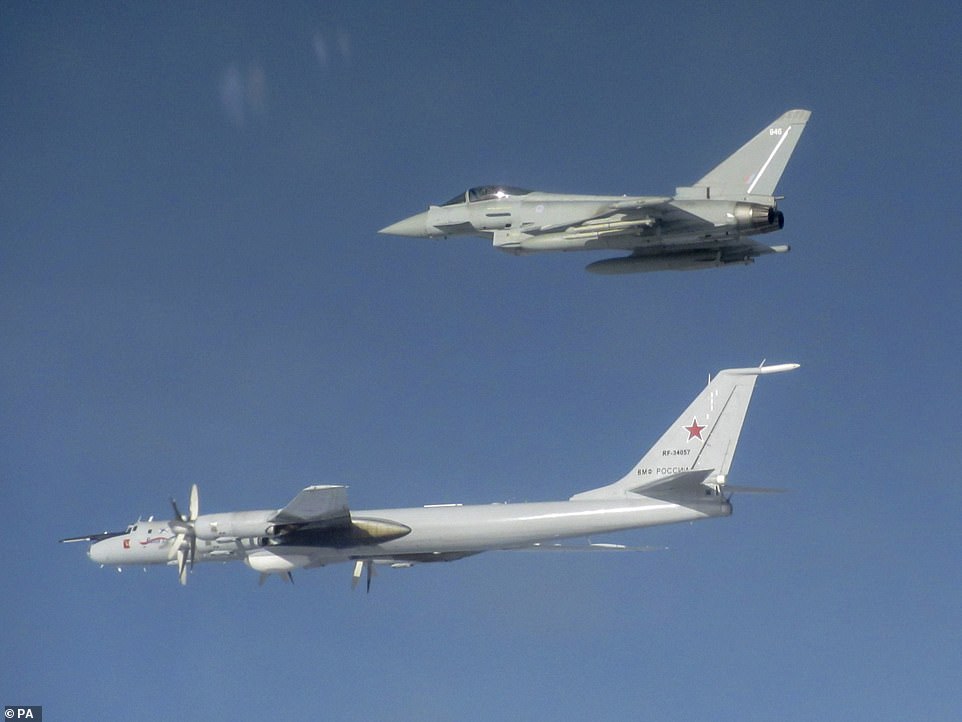 The Typhoon FGR4 provides the RAF with a highly capable and extremely agile multi-role combat aircraft, capable of being deployed in the full spectrum of air operations, including air policing, peace support and high intensity conflict.

The RAF deployed two pairs of Typhoons from RAF Lossiemouth near Moray and a third pair from RAF Coningsby in Lincolnshire to force them to change course.

A Voyager tanker was also deployed from RAF Brize Norton in Oxfordshire.

In the same period, jets from RAF Coningsby were also deployed to a separate incident involving Russian aircraft.

All these incidents come amid heightened tensions between London and Moscow, after Russian GRU agents used chemical weapons in Salisbury in 2018.