This is the ‘arrogant’ postman who claimed he was ‘too knackered’ to help a frail pensioner who fell in the snow.

Thomas McCafferty has been suspended by the Royal Mail for refusing to assist Patricia Stewart, 72, when she lost her footing and fell down her icy front steps as she tried to collect a parcel he left for her.

Mr McCafferty, 51, responded to her appeals for help by telling her ‘I can’t help, I’m too knackered’ and then walked away.

Calling over his shoulder, McCafferty told Mrs Stewart to put on her slippers as he walked off, which had come loose during her fall.

The incident in the village of Bainford, Falkirk, took place during the coldest February since 1955.

It came to light after footage from a neighbour’s doorbell camera was posted on social media and gained traction worldwide. 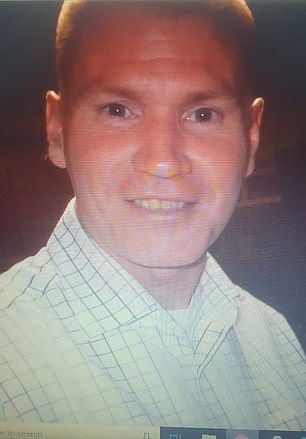 Pictured: Thomas McCafferty is identified as the Royal Mail postal worker who left Patricia Stewart, 72, in the snow after she fell while collecting a parcel because he was ‘too knackered’

Mrs Stewart’s family said the postal worker should be sacked and claimed Mrs Stewart, who suffers from the bone disease osteoporosis and uses a Zimmer frame to move about, could have died.

McCafferty, who is not the pensioner’s regular postman, also failed to alert neighbours as he carried on going about his rounds and didn’t bother to alert them to Mrs Stewart’s plight.

He could now face the sack if Royal Mail bosses find him guilty of gross misconduct.

He was not at his home yesterday as MailOnline approached him for comment, but has yet to apologise to Mrs Stewart for his behaviour.

A neighbour told MailOnline: ‘He hasn’t been seen for the last few days, but people are talking about him.

‘I haven’t seen the video but it is not something people expect of members of the local community and especially a postman. We’re close knit around here. 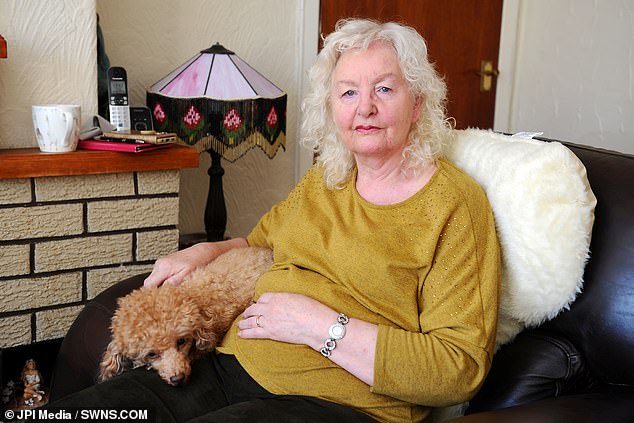 Patricia Stewart (pictured), who suffers from osteoporosis, slipped and banged her head as she bent over to pick up two parcels left on the doorstep of her home in Bainsford, near Falkirk 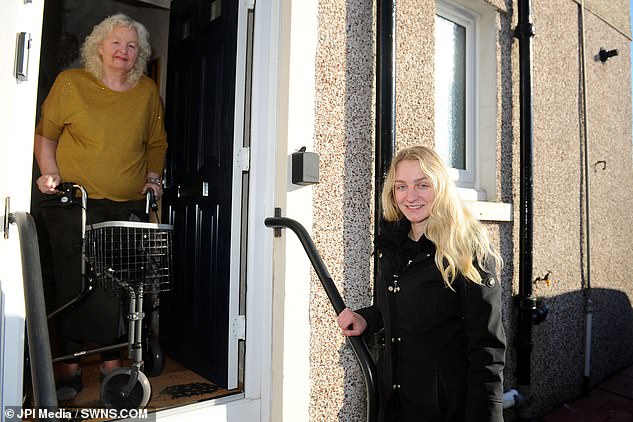 Patricia was thankfully rescued by 22-year-old Hermes driver Karolina Domska 20 minutes later, who helped her up, got her inside her home and called her neighbours for more help

‘We like to think we would help each other in need.’

Mrs Stewart was only rescued when a Hermes driver Karolina Domska, 22, came along 20 minutes later.

She found her soaked through and sobbing in the snow in her bare feet with her slippers nearby and immediately rallied neighbours to help.

‘But what this gentleman did is disgusting. He deserves everything he is going to get.

‘He seems to be quite well known in the postal industry and has worked there for over 20 years. 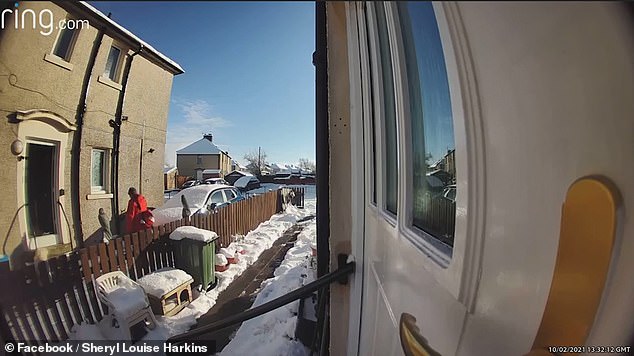 ‘The postal workers I have spoken to are refusing to work with him again and I’ve been told he’ll be moved to another office, but I’m hoping they won’t work with him either.

‘He shouldn’t be working with the public.

‘Postal workers and retired postal workers have sent me so many messages about this guy and he appears to be known for being arrogant.’

Mrs Stewart is a grandmother of two. She has lived on her own after the death of her husband a decade ago.

She said: ‘I felt a bit dizzy. I fell from the top step to the bottom and I banged my head. I just couldn’t get up.

‘I shouted for the postman to help me and he came back. 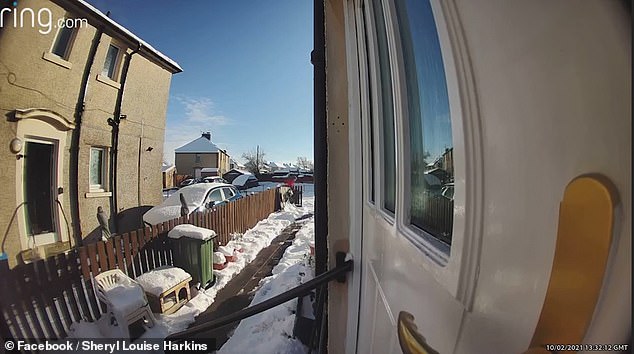 ‘But he said, ‘I’ve been working from early this morning and I’m knackered’, and then went away.

‘If it hadn’t been for the people who helped I would have been lying there for hours.’

Sheryl added: ‘I’ve had people from Russia trying to get in touch with me, American families have got in touch.

‘People are just disgusted. If there was no footage I don’t think anyone would believe it.

‘Even if he didn’t lift her up he could have called on a neighbour or someone. It’s inhumane to do what he’s done. 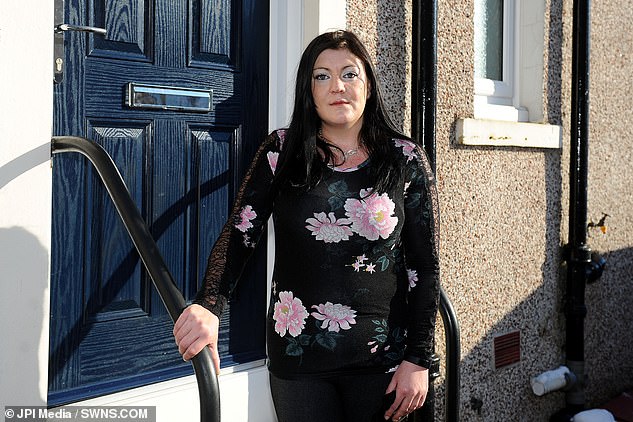 Patricia’s niece Sheryl Harkins, 36, accused postman of leaving her aunt ‘to die’ in the snow

‘He could have contacted me to apologise but he hasn’t and a postman told me he doesn’t think he has done anything wrong.

‘If that is the case we’re not going to get an apology off this guy, if that’s his mentality.

‘We want him exposed which is why we put the video out on Facebook, because it’s not acceptable.

‘I am still expecting an official response from Royal Mail about what is happening to the guy.

‘We should be entitled to know the outcome of their investigation.’

Treatment for Mrs Stewart’s health condition, including scans and operations, has been delayed due to the coronavirus lockdowns.

It is understood that the former social care manager fell a day after she received a coronavirus vaccine.

Mrs Stewart said: ‘I’ve done nothing wrong. I’m a nice person. I couldn’t believe that he walked away and left me and didn’t seek anybody’s help.

Last night, a Royal Mail spokesman said: ‘Royal Mail expect the highest standards of behaviour from our people while out on deliveries and collections at all times.

‘We regularly remind our postmen and postwomen of the important role they play in their local communities.

‘We have been in touch with the customer concerned to apologise and to inform them we are investigating this incident.’