Royal Mail has given its clearest indication that it could split from its profit-making international arm after a crippling industrial dispute saw it slump into the red.

The UK business racked up a loss of £219million for the six months to September 25 compared with a profit of £235million a year earlier – partly thanks to the £100million impact of strike action.

That pushed parent company International Distributions Services (IDS) into the red too, even as its international parcel business GLS recorded a profit of £162million.

Losses: Royal Mail racked up a loss of £219m for the six months to September 25 compared with a profit of £235m a year earlier – partly thanks to the £100m impact of strike action

The group, which changed its name from Royal Mail to IDS this year, warned that it could separate the two businesses.

Chairman Keith Williams said: ‘The difference between the performance of our two companies could not be more stark.’

While GLS had ‘adapted well’ to inflation pressures, Royal Mail had for months been ‘standing at a crossroads’ with the Communication Workers’ Union (CWU).

‘We are now heading in a clear direction in light of the substantial losses in Royal Mail,’ he said.

The company, which also suffered from falling parcel and letter volumes, said the need for change was ‘urgent’ with the losses it has incurred ‘not sustainable’.

Royal Mail is cutting 10,000 jobs and seeking to transform the way it operates but has met resistance from unions over its plans and has also been in dispute over pay.

The company last month made an improved offer worth 9 per cent over two years. Yesterday it said talks with the CWU were continuing, but warned further strike action could mean more job losses and result in the latest offer being withdrawn.

Royal Mail has also been seeking to save money by reducing its legal obligation to deliver letters from six days for five days and yesterday said it had approached ministers seeking an ‘early move’ for the change.

However, the Government said there were no current plans to alter the obligation. Other changes include scrapping a cap on the number of self-employed drivers it can use to make Parcelforce Worldwide deliveries, bringing it more into line with rivals. 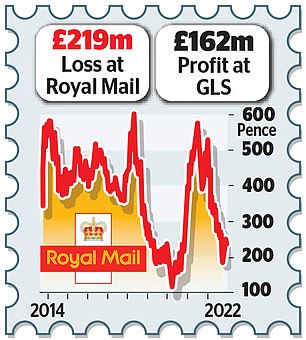 Meanwhile the job-cutting push, which is expected to mean between 5,000 and 6,000 redundancies, saw Royal Mail yesterday open an online portal allowing employees to opt for voluntary redundancy.

At the same time, a shift from mail sorting centres to larger regional ‘super hubs’ has prompted a review that is likely to mean some smaller sites close.

IDS insisted that it ‘considers that both its businesses [Royal Mail and GLS] have potential to be successful’. But the possible future for Royal Mail as a stand-alone business looks bleak.

Its privatisation in 2013 saw the business valued at £3.3billion, amid criticism that it had been undervalued. But after an initial burst of enthusiasm for the float it is now worth £2.3billion. IDS shares were down 1 per cent, to 2.5p, at 237.3p on the latest results.

Russ Mould, investment director at AJ Bell, said a split of the business was ‘looking more likely as time goes on’.

‘Yet one must question which investors would be happy to just hold shares in the UK business,’ he added. ‘It’s broken, battered and bruised, with an unco-operative workforce and a large part of its business in steady decline. That’s an ugly combination.’