With bosses due to be grilled by MPs today over the worsening state of the service, analysts said the business was on course to rack up a £745million loss for the 12 months to the end of March.

That represents more than £2million a day and follows a £416million profit last year.

Royal Mail has been battered by strikes, the end of the pandemic parcel boom and a recent Russian cyber-attack that has stopped it sending post overseas.

So large are Royal Mail’s projected losses that it would push its parent company, International Distributions Services (IDS), to a £290million loss for the year from a £662million profit in 2022.

The eye-watering sum also stands in stark contrast to IDS’s international delivery business GLS, which is predicted to rake in a profit this year of £317million.

Royal Mail, which was set up 507 years ago by Henry VIII, is facing a threat to its existence as it tries to boost its competitiveness with a series of changes to working conditions and the automation of sorting offices around the country.

The plans have been opposed by the Communication Workers Union (CWU), which represents around 115,000 postal workers.

In a bitter industrial dispute, staff walked out over the crucial Christmas period, leaving cards and presents piled up in post rooms across Britain.

Matters were made worse last week when Royal Mail warned a cyber-attack has caused ‘serious disruption’ to its overseas postal service, leaving it unable to send parcels and letters abroad. 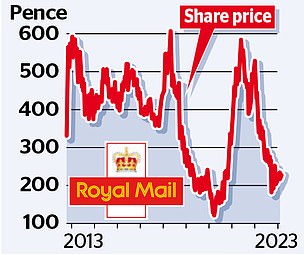 A Russia-linked hacking firm called Lockbit claimed responsibility. More than 100 Royal Mail engineers are working to find a solution and get the service back up and running. But the company has not yet provided a date for when overseas post will resume.

The incident adds another headache for IDS boss Simon Thompson, who is due to appear before the Commons Business, Energy and Industrial Strategy committee today to answer questions about the state of the firm.

Appearing alongside him will be Nick Read, the boss of the Post Office, a separate state-owned company, as well as CWU heads Dave Ward and Andy Furey.

The seemingly endless stream of problems at Royal Mail has dented IDS shares, which have tumbled 55 per cent over the last 12 months and are languishing well below the 2013 330p float price.

Thompson warned in a letter to staff last month that they were ‘fighting for the life of this business’.

IDS has previously said it could split the company in two to separate troublesome Royal Mail from the much more successful GLS branch.