Postboxes up and down the country are sporting crocheted ‘toppers’ of Queens, crowns and corgis to celebrate the Jubilee. But Royal Mail, now a stock market company with thousands of small investors, traces its history back to a much earlier Monarch, Henry VIII, who appointed Sir Brian Tuke as the first ‘Master of the Posts’ in 1516. Now, under its new chief executive Simon Thompson, the business is at a crossroads as the use of letters dwindles away in the digital age.

The postal service is a minor miracle that we take for granted, Thompson says. Between them, Royal Mail’s 90,000 posties walk more than a billion steps every day, delivering to 31million addresses.

‘You can stick something in one of our 110,000 postboxes and it will get to its destination. It is an achievement, it is astonishing.’

On a mission: Simon Thompson says he is investing in automation and people

Be that as it may, being Britain’s top postie is no easy job.

The challenge proved too much for Thompson’s predecessor, German businessman Rico Back, who quit after bruising battles with the unions. Revelations in the Daily Mail that Herr Back had been running the company from his £2.3million home overlooking Lake Zurich in Switzerland during the Covid crisis didn’t help.

Thompson, 55, whose previous roles include senior positions at Ocado and HSBC, took over at the start of last year.

A miner’s grandson from Darlington in County Durham, he is neither remote nor grand.

Finding himself unable to hire a car for a work journey from Hereford to Llandrindod Wells during the pandemic, he commandeered a red post van rather than resort to a chauffeured limo, somewhat to the indignation of Brian, its usual driver.

He also relished a delivery round in his home town. It became a journey down memory lane as it included the terrace houses of Falmer Road, where his paternal grandfather ‘Tot’ Thompson, who was fiercely loyal to former miners’ leader Arthur Scargill, had lived.

Joking aside, Thompson has his work cut out. He is up against cutthroat competition, interminable industrial disputes, a falling share price, a billionaire Czech investor with a very large stake – oh, and pressure for greener deliveries.

This week, he will launch a new environmental plan to bring forward Royal Mail’s net zero carbon emissions target by ten years to 2040. The goal is to slash the average emissions per parcel delivered in the UK significantly – to around the same as making a cup of tea with milk.

But green ambitions, important though they are, will not be enough to secure Royal Mail’s future. Royal Mail formally split a decade ago from the Post Office and it is the latter, not the business Thompson runs, which is being hit by strike action this weekend.

Similarly, Royal Mail is not implicated in the damaging scandal that engulfed the Post Office over former sub-post masters who were wrongly accused of fraud.

The company, needs to win the support of its staff for the modernisation plans to succeed. ‘Last year, our disputes were down by 75 per cent – we are happy about that,’ Thompson says. ‘Our people are facing the same cost of living pressures as everyone else, but it’s not just about pay, it is about the change that will fund the pay rises. That’s where our discussions are with the unions.’

The core of Thompson’s dilemma is that the golden age of the letter, epitomised in WH Auden’s famous poem Night Mail in 1936, is gone, never to return.

The handwritten epistles of that era – ‘The chatty, the catty, the boring, the adoring/The cold and official and the heart’s outpouring’ – are, much less evocatively, tapped out on a keyboard and whoosh through the ether by email.

‘There were 20billion letters sent in 2004-05, and now it is 8billion,’ Thompson says. ‘The trajectories are really clear. More than half our revenues are now from parcels. We are a parcels business that also does letters. In the psyche of the company, it is a huge change.’

Will customers have to pay more? The price of a first-class stamp was recently raised by 10p to 95p and second-class has gone up by 2p to 68p. Thompson admits there may be more price hikes to come.

‘With the inflationary reality out there, we will just have to keep looking at it,’ he says.

He is holding forth in Mount Pleasant in London, a former Victorian jail that now serves as the principal mail processing centre for the capital. New parcel sorting machines are being installed with an intelligent system of conveyor belts and scanning technology. It is part of a multimillion-pound investment programme, aiming for 90 per cent parcel automation by 2023-24. 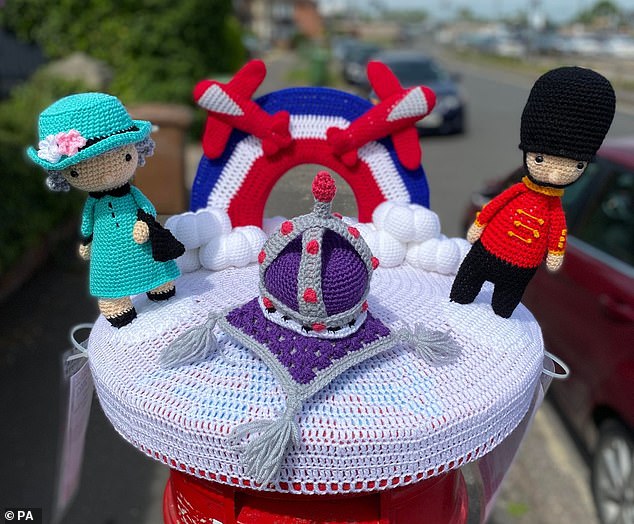 Post lady: The Queen is adorning postboxes around the country

‘This machine,’ he says, ‘is capable of doing 7,500 parcels an hour with ten operators. Through manual processing, it would be about a third of that.’

Won’t some staff lose their jobs as a result of the changes?

‘We are investing in automation and in people as well. It requires fewer people, but in terms of protecting jobs in the future, it is positive because it makes the business more sustainable.’

The fleet of delivery vans is going electric as part of the push to go green. ‘By spring next year, we will have 5,500 electric vehicles, more than one in ten,’ Thompson says. ‘The fuel cost is 73 per cent lower and maintenance 37 per cent lower.’

The company has also been trying out e-trikes and golf buggy-style small electric vehicles as well as drones, which will concentrate at first on island communities on the Scillies, Shetlands, Orkneys and Hebrides.

Boots on the ground are still greenest of all, Thompson says. ‘We love the fact the post is on foot. We go everywhere every day.’

Royal Mail floated on the stock market in 2013 and around 20 per cent of its share capital is owned by small investors and staff.

They must be grinding their teeth that the shares have sunk by nearly 43 per cent this year, after climbing in the pandemic. Not only are they languishing below the £3.30 flotation price, but the company has also just been ejected from the elite FTSE100 Index of leading shares.

Thompson won’t be drawn on the share performance, saying ‘we are changing the business so we can compete, and that is what I am focused on’. Nor will he discuss the stake held by Czech businessman Daniel Kretinsky, who has around 20 per cent of the shares.

Would it matter if Royal Mail were taken over by an overseas predator and it lost its identity as an independent British business?

‘Those thoughts do not pass in my head. I have to reinvent Royal Mail for the next generation, that’s what I am concerned about. I don’t believe Royal Mail has a divine right to exist, not at all, though I do believe it is a company that society wants to exist.’

We might all be sending fewer letters, but if he could post one to anybody, alive or dead, who would it be? ‘My grandad,’ he says.

‘I would probably ask him, ‘Tot, what do you think of what I’m doing?’ I would ask him if he is OK that I am in management. I’m not sure he would be.’