A royal shock! The Queen’s horse Reach For The Moon finishes second in the Hampton Court Stakes with Frankie Dettori’s hot favourite beaten by Claymore at Ascot, denying her a 25th winner at the meeting

Claymore fended off Reach For The Moon in the Hampton Court Stakes to deny the Queen a Royal Ascot winner.

All week the hope had been that, while the royal silks held various each-way chances, the John and Thady Gosden-trained Reach For The Moon was the one that would provide Her Majesty with a 25th winner at the meeting in her Platinum Jubilee year.

Frankie Dettori tracked Adam Kirby on Claymore into the straight and while on entering the final furlong 2-5 favourite Reach For The Moon drew level, as the contest wore on Jane Chapple-Hyam’s well-regarded colt, who had no joy in the French Guineas last time out, pulled out more to win by a length and three-quarters.

The 7-1 chance was providing Chapple-Hyam with a second winner of the week after Saffron Beach on Wednesday. 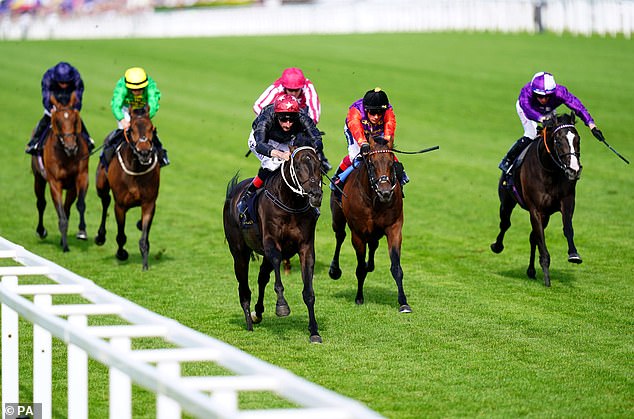