The Royal Air Force is testing its own autonomous vehicle to deliver supplies around a base in Oxfordshire to ‘free up personnel from mundane tasks’.

Its specially-designed self-driving car, called Kar-Go, is a zero-emissions delivery vehicle capable of travelling at speeds of up to 60 miles/hour.

It’s been zipping around the Royal Air Force base of Brize Norton in Oxfordshire, delivering tools, equipment and supplies to personnel as part of a trial.

When arriving at its destination on the base, RAF personnel meet Kar-Go and a hatch is automatically released enabling them to collect the cargo.

Slightly odd in appearance, Kar-Go looks a bit like a gigantic green computer mouse with protruding wheels, complete with flashing lights and a spacious boot.

The strange-looking vehicle, currently being used as part of a Royal Air Force trial, has the appearance of a gigantic green computer mouse with protruding wheels 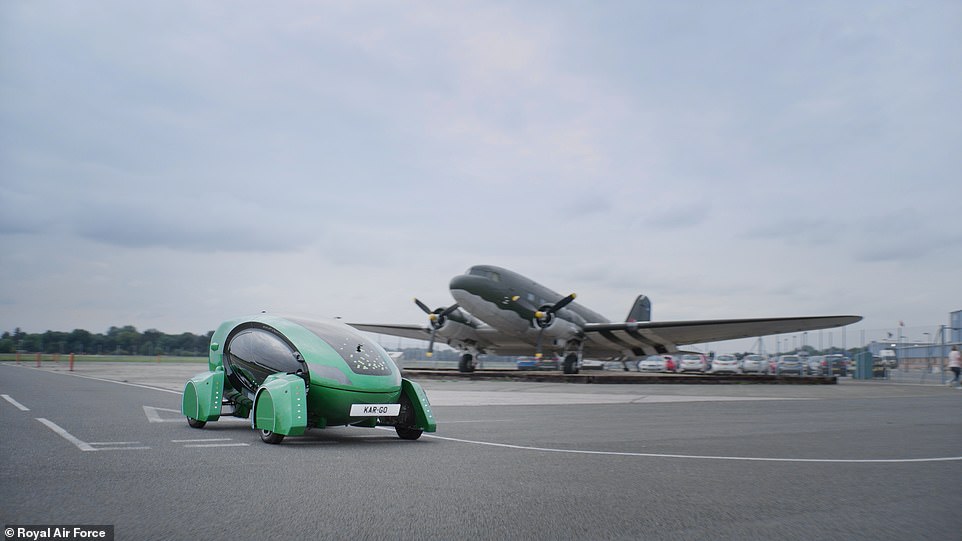 By transporting various cargo, the helpful green vehicle frees up RAF human personnel from mundane tasks, according to the Royal Air Force 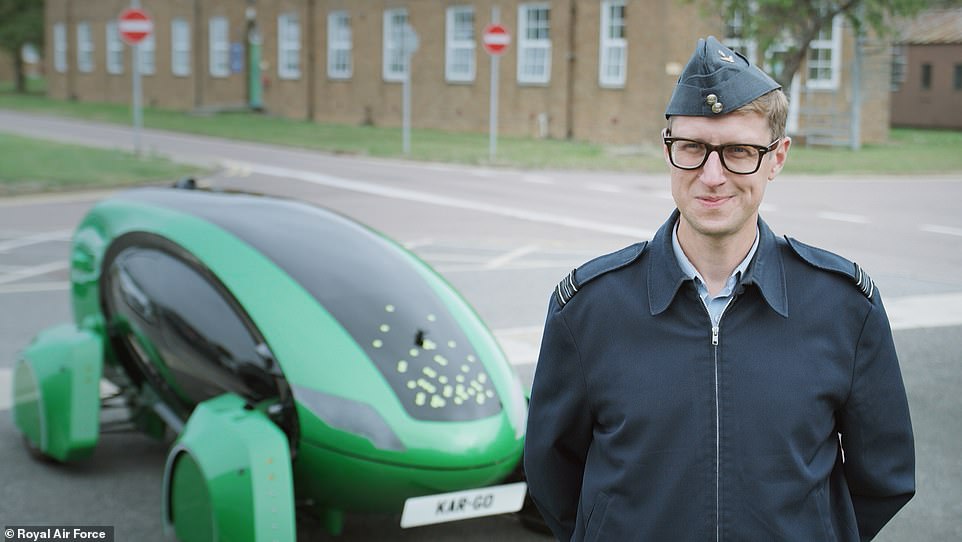 Kar-Go is pictured here with Squadron Leader Tony Seston, RAF Engineer and Astra ambassador, at the Royal Air Force base of Brize Norton in Oxfordshire 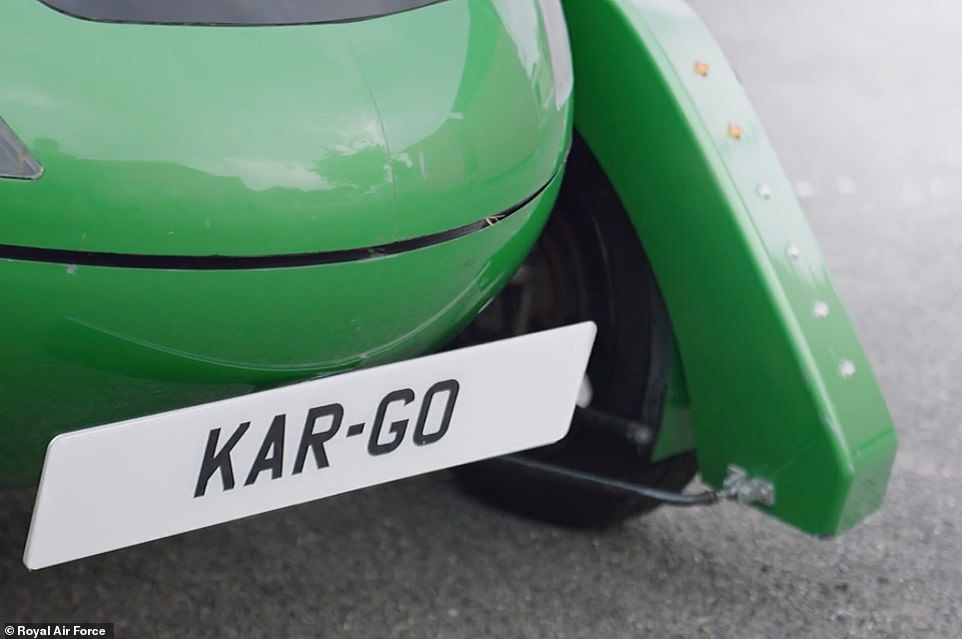 Kar-Go is a zero-emissions delivery vehicle, powered by electricity, and capable of speeds of up to 60 miler per hour

Staff at RAF Brize Norton have been working with the Academy of Robotics, a Sussex-based technology company, on the trial.

If successful, the RAF may even scale-up its autonomous vehicles at some point in the future so that they can carry larger loads, like the tires of its aircraft.

For security reasons, only trained and authorised personnel can normally move goods around an airbase.

But the use of secure, autonomous vehicles can free up their time to focus on the core roles they were trained for.

Kar-Go is also electric, meaning it reduces harmful greenhouse gas emissions and can help the RAF towards its previously-made pledge of becoming net zero by 2040.

Net zero means any emissions would be balanced by schemes to offset an equivalent amount of greenhouse gases from the atmosphere. 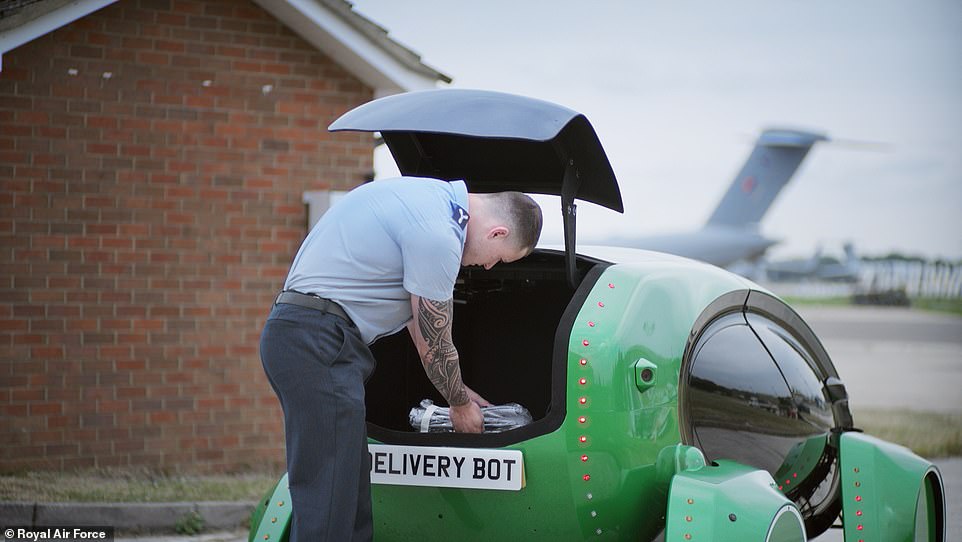 When arriving at its destination on the base, recipients meet Kar-Go and a hatch is automatically released enabling them to collect the cargo 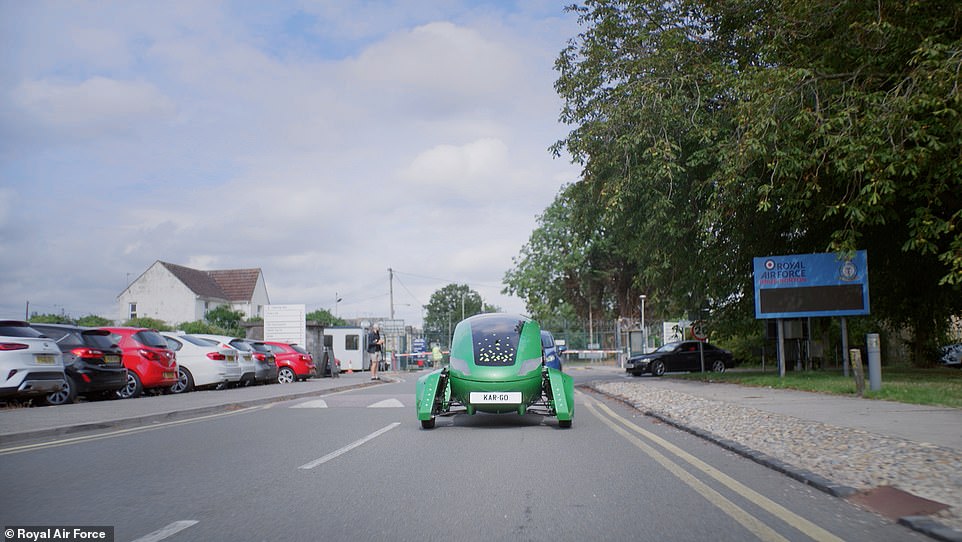 Staff at RAF Brize Norton have been working with the Academy of Robotics, a West Sussex-based technology firm, on the trial

THE FIVE LEVELS OF AUTONOMOUS DRIVING

Level 1 – A small amount of control is accomplished by the system such as adaptive braking if a car gets too close.

Level 2 – The system can control the speed and direction of the car allowing the driver to take their hands off temporarily, but they have to monitor the road at all times and be ready to take over.

Level 3 – The driver does not have to monitor the system at all times in some specific cases like on high ways but must be ready to resume control if the system requests.

Level 4 – The system can cope will all situations automatically within defined use but it may not be able to cope will all weather or road conditions. System will rely on high definition mapping.

Level 5 – Full automation. System can cope with all weather, traffic and lighting conditions. It can go anywhere, at any time in any conditions.

Kar-Go performs autonomous and semi-autonomous procedures with a safety team monitoring from a unique mobile command hub known as Athena. (RAF considers any point where they switch to a human operator as semi autonomous.)

The ‘Athena’ command hub is a secure mobile unit within a modified luxury coach, which can oversee all aspects of Kar-Go’s operations.

From Athena, the team can take control of the vehicle remotely if necessary, from a specially-designed command chair, complete with pedals and a steering wheel to reflect ‘a normal driving experience’.

Kar-Go has level 4 autonomous driving – meaning it’s capable of performing all driving functions, but at this stage a remote operator or safety driver may need to take over in some occasional conditions.

The RAF is now reviewing the findings from the trial to look at how it can be scaled effectively as part of their continued commitment ‘to bringing innovation into the RAF’.

‘Moving goods securely around a site is a major challenge for almost all large organisations,’ said William Sachiti, CEO of Academy of Robotics.

‘Although we have optimised everything we do to be able to do trials like this where the technology can complement the core work taking place on large industrial sites, every site has its own nuances and challenges.

‘The fact we have designed the whole system has been a huge benefit here giving us complete control and making it much easier to adapt it to the specific integration challenges of the environment we are operating in.’ 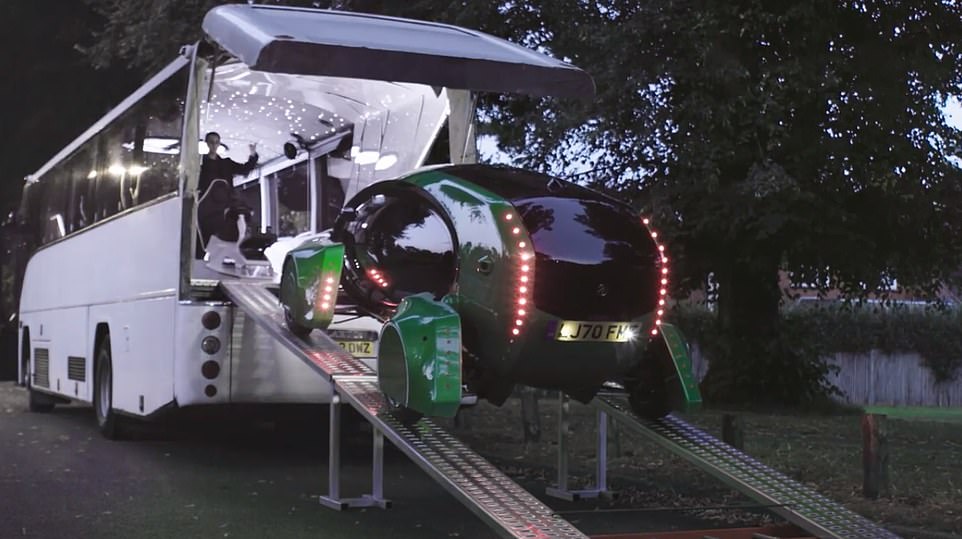 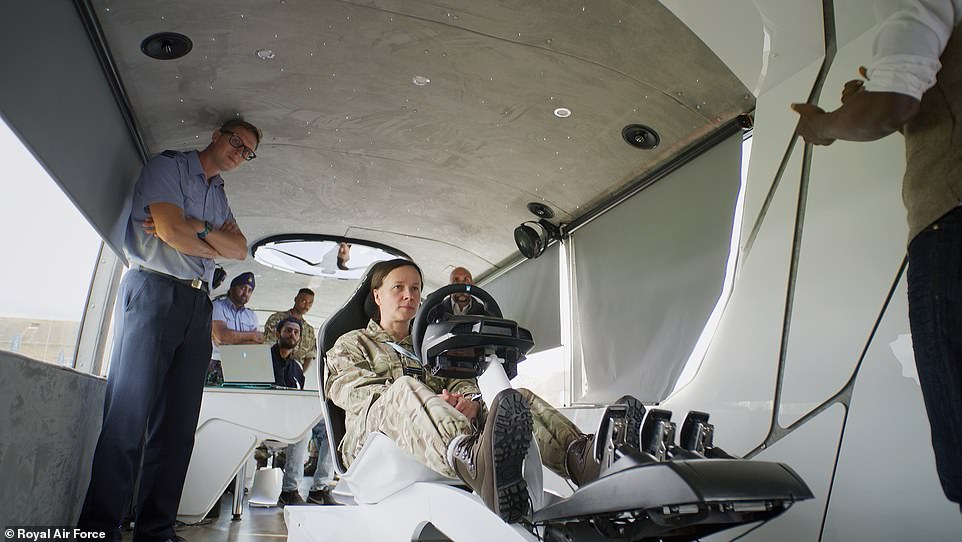 From the Athena command hub, the team can take control of the vehicle remotely if necessary, from a specially-designed command chair, complete with pedals and a steering wheel 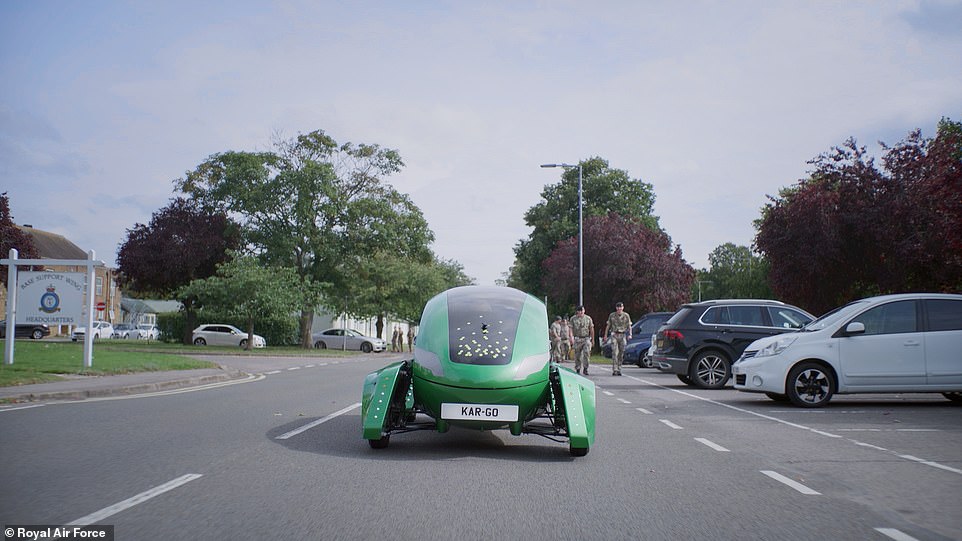 If successful, the RAF will scale-up its autonomous vehicles so they can carry larger loads, like the massive tires of its various aircraft

‘That’s the sort of work our aviators want to be able to focus on and in situations like this, every minute we save can save a life.

‘This trial is part of a continued programme to take away the mundane tasks that cause added stress and inconvenience for our people, to help our highly-trained personnel to do the jobs they joined the RAF to do and to do them to the best of their ability.’

Self-driving cars often use a combination of normal two-dimensional cameras and depth-sensing ‘LiDAR’ units to recognise the world around them.

However, others make use of visible light cameras that capture imagery of the roads and streets.

They are trained with a wealth of information and vast databases of hundreds of thousands of clips which are processed using artificial intelligence to accurately identify people, signs and hazards.

In LiDAR (light detection and ranging) scanning – which is used by Waymo – one or more lasers send out short pulses, which bounce back when they hit an obstacle.

These sensors constantly scan the surrounding areas looking for information, acting as the ‘eyes’ of the car.

While the units supply depth information, their low resolution makes it hard to detect small, faraway objects without help from a normal camera linked to it in real time.

In November last year Apple revealed details of its driverless car system that uses lasers to detect pedestrians and cyclists from a distance.

The Apple researchers said they were able to get ‘highly encouraging results’ in spotting pedestrians and cyclists with just LiDAR data.

They also wrote they were able to beat other approaches for detecting three-dimensional objects that use only LiDAR.

Other self-driving cars generally rely on a combination of cameras, sensors and lasers.

An example is Volvo’s self driving cars that rely on around 28 cameras, sensors and lasers.

A network of computers process information, which together with GPS, generates a real-time map of moving and stationary objects in the environment.

Twelve ultrasonic sensors around the car are used to identify objects close to the vehicle and support autonomous drive at low speeds.

A wave radar and camera placed on the windscreen reads traffic signs and the road’s curvature and can detect objects on the road such as other road users.

Two long-range radars on the bumper are used to detect fast-moving vehicles approaching from far behind, which is useful on motorways.

Four cameras – two on the wing mirrors, one on the grille and one on the rear bumper – monitor objects in close proximity to the vehicle and lane markings.