Until the Prime Minister began his daily Covid press conferences in March, I never truly appreciated the power statistics can have over us.

Watching those grim-faced events, dispassionate observers noticed how one element in particular – the daily death toll of people who had tested positive for Covid-19 – could paralyse a country with fear.

Even today, with a mass vaccination programme well under way, many in Britain still await this statistic with trepidation.

Yesterday the Government announced a further 414 Covid deaths. Sadly, that figure is likely to balloon in the days ahead owing to a delay in reported deaths over Christmas. (On December 23, for example, 744 deaths were reported.)

But even an alarmingly high figure – say 1,500 or so – in the coming days, skewed by the reporting delays, must be taken in context.

Britain has an elderly population compared with many countries and large numbers of people die every day.

In England and Wales in 2019, for example, 530,841 people died – an average of 1,454 every day or ‘four jumbo jet’ loads, to use the alarmist comparison favoured by much of the pro-lockdown commentariat.

While Covid-19 is, of course, a serious disease, many of those who have died from it were close to the end of their lives in any case. If it hadn’t been Covid-19, it might well have been another infectious disease – flu or pneumonia – which dealt the final blow.

Covid has killed some ‘healthy’ people who did not have underlying conditions, but it has done so in relatively small numbers. Until 4pm on December 23, 47,750 people had died of Covid-19 in English hospitals, but fewer than 2,000 of these had no pre-existing medical condition. 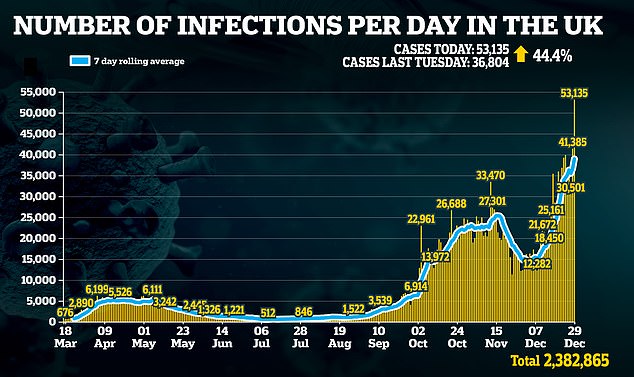 These figures, from NHS England, exclude people who have died at home or in nursing homes.

The Government’s definition of a Covid death is someone who has died from any cause within 28 days of testing positive for Covid-19.

You could be struck by a bus three weeks after a positive test and still be reported as a Covid death. 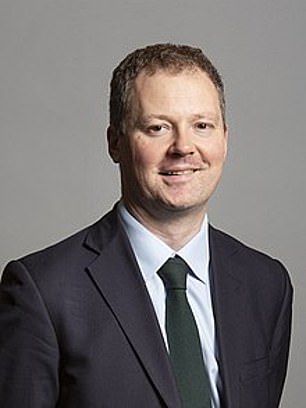 When these figures were revealed at the weekend, Neil O’Brien, Conservative MP for Harborough, tweeted: ‘Many [of Covid’s victims] had prior medical conditions, but we don’t hold their lives to be valueless because Britain isn’t a fascist state.’

Indeed. But that rather misses the point. The daily death toll of several hundred is certainly very sad and has led some Britons to think we are in the midst of a cataclysm on the scale of the Black Death – which killed a third to a half of all Europeans in the 14th century. The reality is very different.

Instead, we can gain a far more accurate picture of Covid-19 by looking at ‘excess deaths’ – the number of people who have died this year compared with what might be expected in an average year.

The Office for National Statistics says that in the week to December 11 there were 12,292 deaths registered in England and Wales – 14 per cent above the five-year average.

Yet the population is growing and ageing – the number of over-70s is increasing by around two per cent a year – so, all things being equal, we should expect more people to die. More enlightening is the ‘Mortality Monitor’ published by the Institute and Faculty of Actuaries, which adjusts the mortality rate to take account of a growing and ageing population. 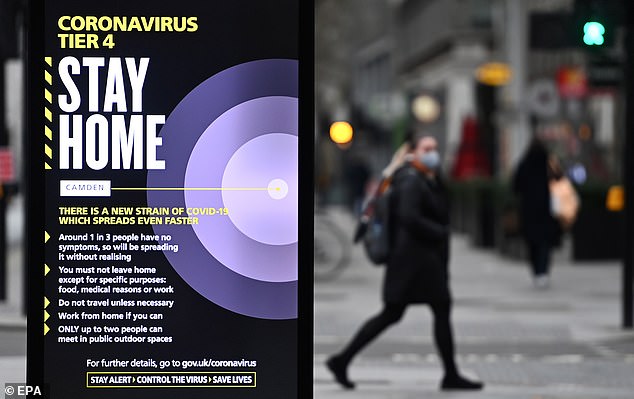 In other words, we have been through a pandemic which has closed down large parts of the economy and led to us being locked down in our homes for weeks on end – and yet, after all that, it has really just returned us to the mortality rate of 12 years ago.

Moreover, doctors have become better at treating the virus. The numbers of people being treated for Covid-19 in hospital are back to where they were in the spring – just under 22,000.

Yet the daily death toll is about two-thirds of what it was then – it peaked at a little over 1,000 on April 8.

Covid-19 is a serious disease and the sooner we get the vaccine rolled out the better. But there is no need to get carried away. Covid is no plague.