EXPRESS INFORMER > News & Politics > ROSS CLARK: French threats and why we MUST grow British and take control of the food we eat

First the good news: the closure of Channel ports isn’t going to ruin your Christmas lunch after all (goodness knows we have few festive pleasures left to us!).

Britain’s supermarkets were busy yesterday letting it be known that they have in stock all the festive food they expect to sell before Christmas.

And, anyway, it now looks as if the French will relent and allow lorry drivers across the Channel, as long as those entering France present proof of a negative Covid-19 test.

ROSS CLARK: It now looks as if the French will relent and allow lorry drivers across the Channel, as long as those entering France present proof of a negative Covid-19 test. Pictured President Emmanuel Macron

It was, then, a blockade that wasn’t a blockade — or at least not for more than a few hours. Yet there are important lessons to be learned from it.

The French threat is a startling reminder of just how reliant we are on food imports — and why we should take food security much more seriously than we do.

As a nation, we are just 64 per cent self-sufficient in food — and our ability to feed ourselves has fallen sharply over the past three decades.

Buying British is a matter of national pride for many of us. There is satisfaction to be had in knowing the lamb on our plates was once gambolling freely over our hills and dales, or that the bread we are eating comes from wheat grown on our green and pleasant land.

But there is far more to food security than just pride. The more reliant we are on food imports, the more we place ourselves at the mercy of international crises beyond our control.

We might fool ourselves into thinking — or at least we did until this year — that the modern world is a fairly stable place. But, of course, it isn’t.

In Britain we learned the hard way about food security during two world wars, when German U-boats stalked ships bringing supplies from across the Atlantic, in an attempt to starve us into submission.

At times, the nation was down to its last few weeks of wheat supplies.

War is one thing, but there are more mundane threats, too. If an economic crisis caused the value of the pound to plummet, it would ratchet up inflation for all imported goods.

Then there are trade wars. We’ve been warned that a No-Deal Brexit could add several per cent to the price of food in British supermarkets. But what if Donald Trump’s trade war with China had erupted into an all-out trade war into which we were dragged?

Meanwhile, poor harvests could lead to some countries banning food exports in order to feed their own people. 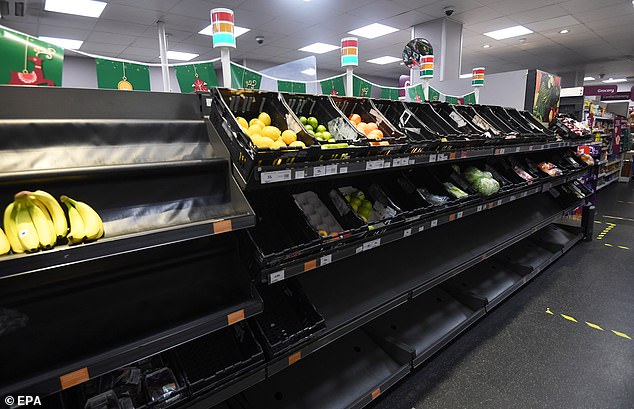 ROSS CLARK: Britain’s supermarkets were busy yesterday letting it be known that they have in stock all the festive food they expect to sell before Christmas

And, as we have seen in the past 48 hours, so much of our national food supply is dependent on one port — Dover — and a couple of motorways through Kent.

It only takes port workers at Calais to go on strike, as they did in 2015, and our super-market shelves start to empty of some goods.

After 1945, successive British governments were determined that, when it came to feeding ourselves, never again would the nation be put in such a perilous position.

Agriculture was transformed through mechanisation, the use of fertilisers and modern techniques, with the aim of making us as self-sufficient as possible.

Subsidies were introduced to support prices. Even The Archers on BBC Radio 4 started off as government propaganda to increase food production — with the names of exciting new fungicides slipped into storylines, for example.

Then, of course, from 1973 British agriculture became subject to the EU’s Common Agricultural Policy (CAP), which initially was also aimed at boosting food production.

While post-war food policy is now criticised for causing environmental damage, such as through the removal of hedgerows, it was remarkably successful.

In the 1930s, we were producing just 40 per cent of the food consumed in Britain — and there were far fewer mouths to feed then than there are now.

By 1984, Britain was 78 per cent self-sufficient in food — 95 per cent in the case of indigenous types of food.

But that turned out to be a high water mark. Finding itself with butter mountains and wine lakes, Brussels started paying farmers to ‘set-aside’ land — i.e. leave it fallow. 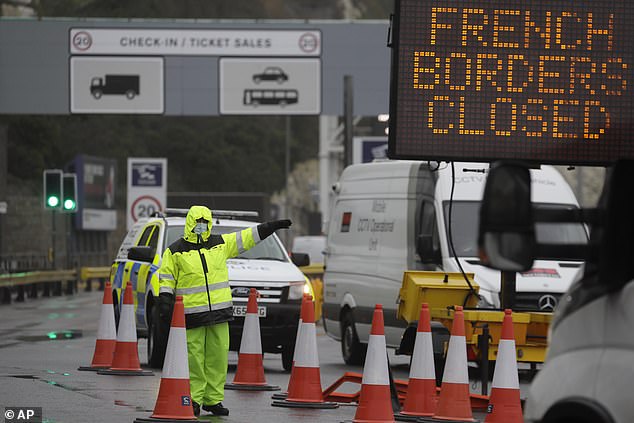 ROSS CLARK: As we have seen in the past 48 hours, so much of our national food supply is dependent on one port — Dover — and a couple of motorways through Kent

In the early 2000s it reformed the CAP and broke the link between production and subsidies. Instead, farmers were paid simply according to how much land they owned — in effect it was a welfare scheme for landowners, many of whom were already hugely wealthy.

It was then that food production in Britain began to slip.

By 2009 our self-sufficiency in food had fallen to just 59 per cent. It has since recovered a little (to 64 per cent in 2019), but for some foodstuffs it is shockingly low.

Just 47 per cent of the vegetables and a mere 16 per cent of fresh fruit consumed in Britain is produced here.

When I was a student in the 1980s, I took summer work picking apples, pears, strawberries and raspberries in East Kent where I then lived.

How sad that most of those orchards have now been grubbed up, while a few miles away we are building massive lorry parks to deal with the 10,000 lorries a day bringing goods into the country.

Leaving the EU ought to be a fresh start, a chance to initiate a food and environmental policy which once again gives British farmers an incentive to produce food and so boost national resilience.

But I fear that post- Brexit agricultural plans, which the Government published last month, look like a wasted opportunity.

There are some good elements. Payments for simply owning land, for example, will be phased out. They will be partly replaced with grants for making farming more environmentally friendly and improving animal welfare.

But there is nothing in the plans about food security. Instead, landowners will be eligible for huge grants for ‘rewilding’ parts of the countryside — without any obligation to produce food whatsoever. It is a recipe for wealthy landowners to create private nature reserves for their own enjoyment, funded by taxpayers.

A far better use of public funds would be payments to encourage farmers to produce food which we would otherwise be forced to import.

I am not normally in favour of subsidies or protectionism, yet the fact is that most of our competitors subsidise their farmers.

We’ve lost so many productive farms over the past couple of decades, as farmers struggle with ever-increasing regulation while battling against competition from heavily subsidised foreign producers.

Payouts for ‘rewilding’ are the final insult. It doesn’t cost money to rewild land — it’s what happens naturally when farms go out of business and are left to run to ruin.

What the Government should be doing is drawing up a national food security policy to tempt entrepreneurs into farming, especially for the food stuffs — fruit and vegetables, for example — in which we are painfully reliant on imports.

Why, for example, can’t we have more enormous greenhouses like they have in the Netherlands, to grow large amounts of fruit and vegetables all year round?

The Government is happy to invest in technology companies on the grounds that they might help create jobs and boost national wealth. It should be investing, too, in more advanced ways to grow food.

The truth is that food security has dropped off the Government’s radar in recent years. And this week’s port closures and lorry jams are the jolt that must make us take it seriously again.