Rosario Dawson turned heads in a colorful, flowy dress as she attended the special screening of the documentary film, Below The Belt, in Los Angeles earlier Saturday evening.

The Mandalorian actress, 43, was accompanied by her boyfriend and philanthropist, Nnamdi Okafor, who was also dressed to impress.

Other celebrities walked the red carpet before the film’s premiere at the Directors Guild of America, such as Jamie Foxx, his daughter, Corinne Foxx, and Hailey Bieber’s older sister, Alaia Baldwin.

Stunning: Rosario Dawson, 43, turned heads in a colorful dress as she attended the screening of Below The Belt in Los Angeles earlier Saturday evening

The talented actress opted for a triangle-patterned dress that fell down towards the ground.

The long-sleeved gown contained hues of green, light blue, and indigo. A black and white belt made of the same cotton material was tied to accentuate her waist.

To accessorize her glamourous look for the night, Rosario added a pair of long, black dangly earrings. She also added an assortment of stylish rings.

The beauty appeared to be in high spirits as she paused for a brief photo session before the screening of the film. 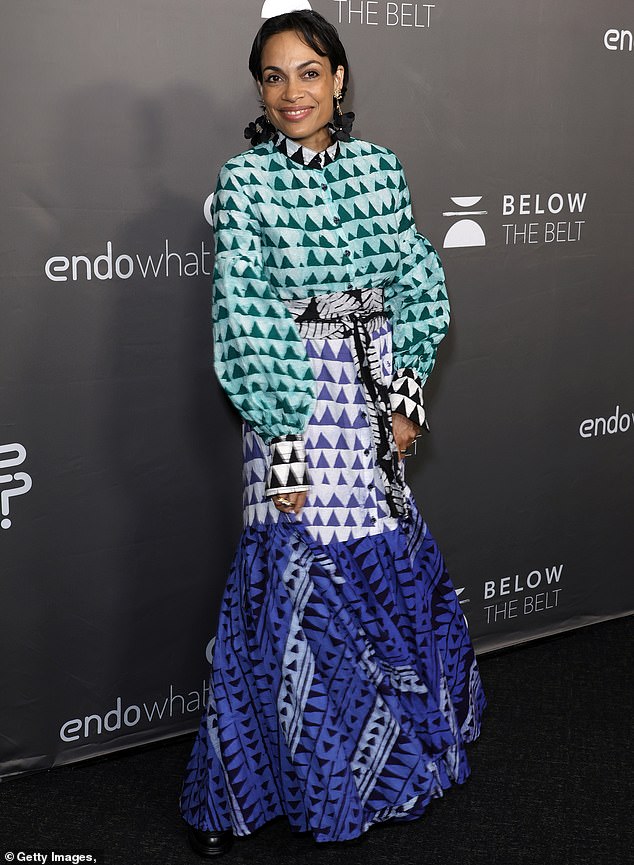 Having a blast: The talented actress was all smiles as she stopped for a brief photo session before the screening of Below The Belt 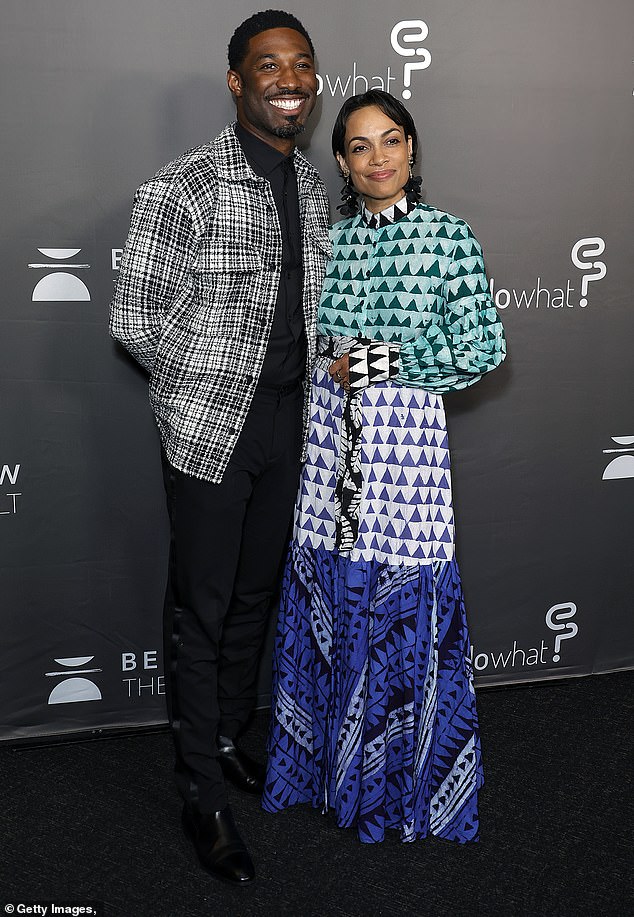 Cute! The star was accompanied to the premiere with her boyfriend, Nnamdi Okafor, who was also dressed to the nines

The Dopesick star also posed for a few loving snaps with her boyfriend, Nnamdi, who is both a philanthropist and a poet.

He donned a pair of black dress pants which he paired with a black dress shirt. He added a tweed jacket on top to compete his overall ensemble.

The couple were first linked earlier this year in April shortly after it was confirmed Rosario had ended her relationship with Senator Cory Booker in February.

Below The Belt is a documentary that focuses on women that suffer from the medical condition known as endometriosis and their journey to finding answers on how to get better, even though there is not a known cure. 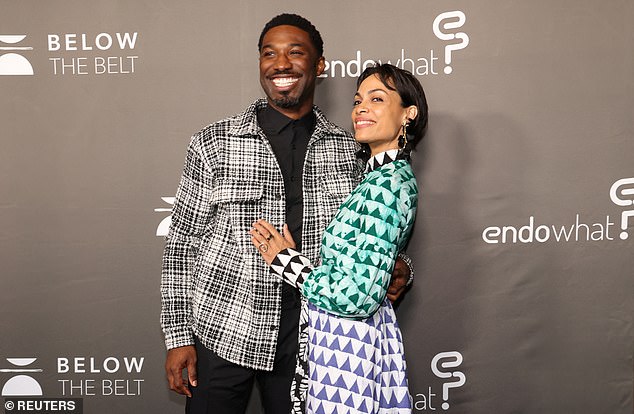 Public: The Dopesick actress has shared a few photos and videos of her relationship with the poet on her main Instagram page 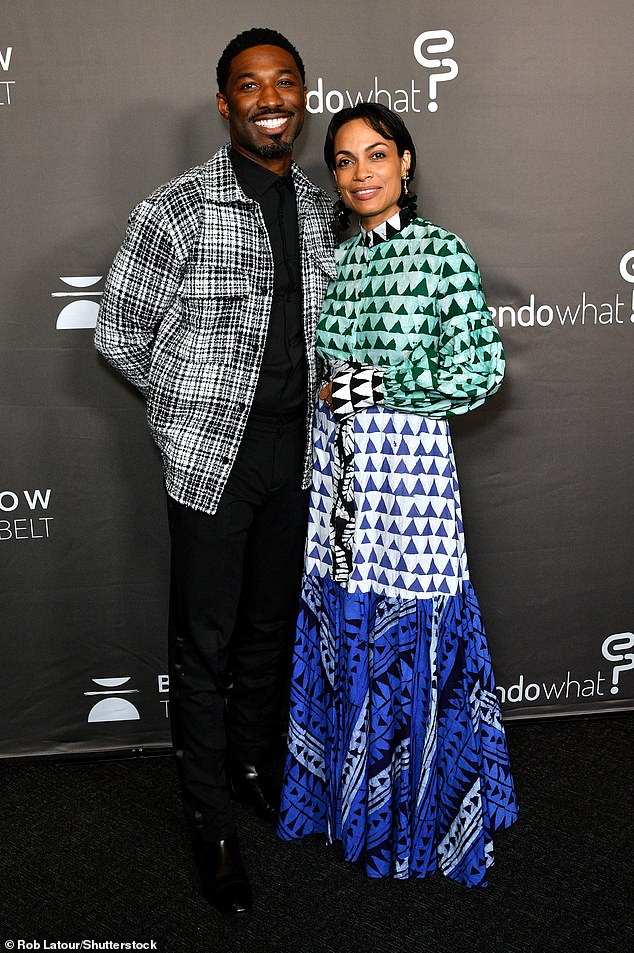 Happy: Rosario and her beau were first linked earlier this year in April shortly after the actress split from Senator Cory Booker in February

Special role: The actress served as an executive producer for the documentary Below The Belt

According to the Mayo Clinic, endometriosis is a disorder that affects one in ten women around the globe and is ultimately caused when tissue grows outside of the womb.

Symptoms range from severe pain, and in other cases, can cause infertility. Rosario served as one of the executive producers for the documentary.

Director Shannon Cohn, who also suffers from the painful disorder herself, opened up to Forbes about the film.

She also weighed in about the executive producers who took part in the project. ‘We are honored to work alongside these incredible Executive Producers to amplify the stories and give a voice to millions with endometriosis,’ she expressed. 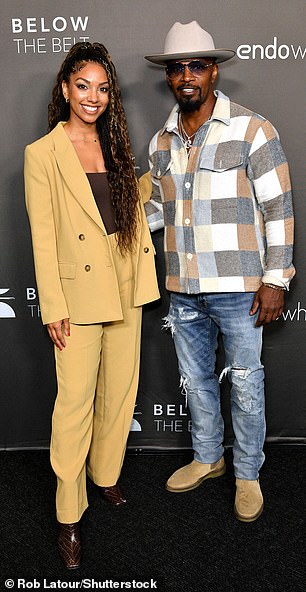 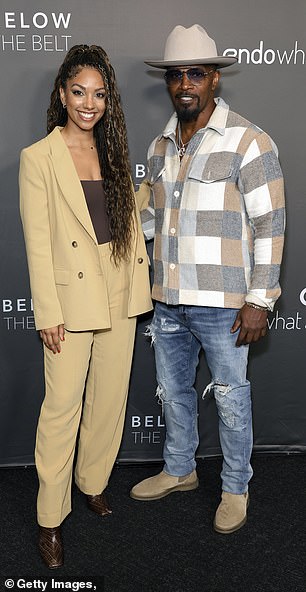 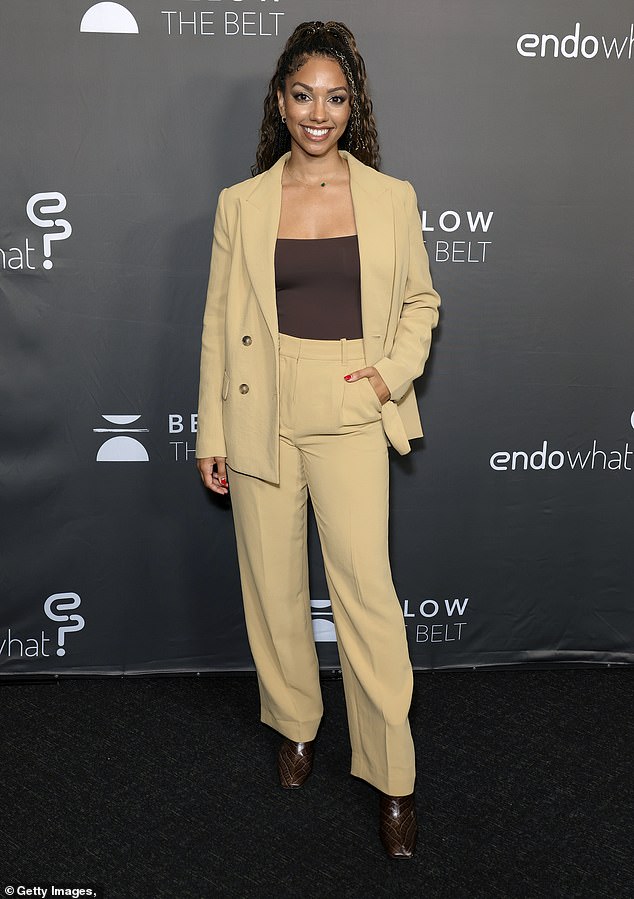 Important part: Corinne also served as an executive producer and assisted in bringing the project to life 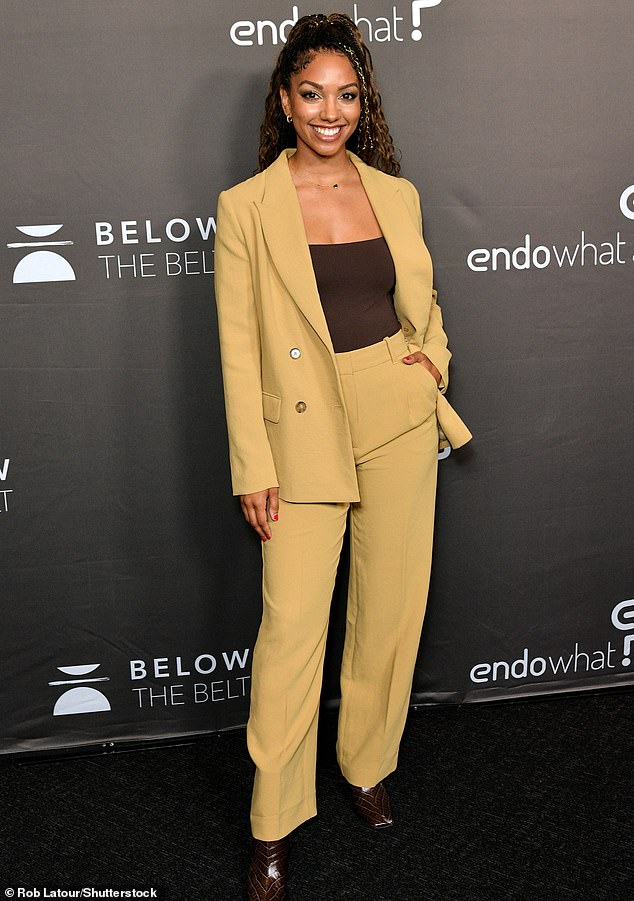 Talented: The beauty has followed in her father’s footsteps, and has starred in multiple projects, such as the series called, Dollface

‘When we asked each Executive Producers to collaborate, they were enthusiastic and supportive. They know well that it’s past time that endometriosis gets the attention it deserves.’

Other executive producers for Below The Belt included Hillary Clinton and Jamie Foxx’s daughter, Corinne Foxx.

The father daughter duo also made a stylish appearance together on the red carpet.

Corinne exuded business chic in tan-colored pants and a matching blazer. She added a dark brown top which she tucked into the waist of her slacks.

Fashionable pair: Rosario and Corinne took time to pose for a few pictures together before the special premiere 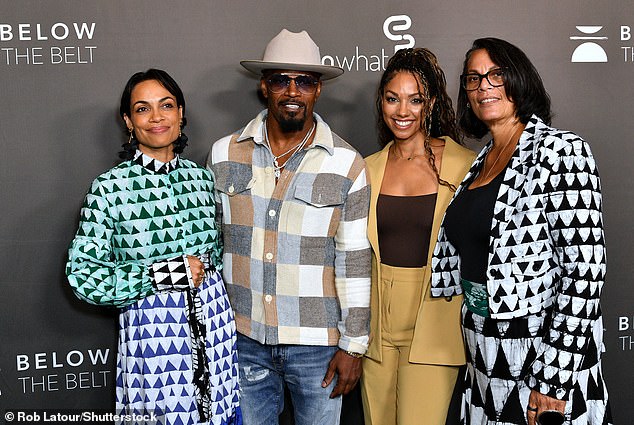 Group photo: Rosario, her mother Isabel Celeste (far right), Jamie, and his daughter Corinne, all posed for a memorable photo together

A pair of fashionable brown boots completed her overall ensemble for the star-studded event.

The Django Unchained actor kept his look comfortable and casual for the night, and wore a pair of classic blue jeans and a flannel shirt. He added a cream-colored cowboy hat on top of his head.

Rosario took time to pose for a few stylish snaps with Corinne and her father, Jamie.

Alaia Baldwin, the older sister of Hailey Bieber, also was in attendance. She donned a sleeveless white blouse and white capri pants that were secured with a thin black belt at the waist. 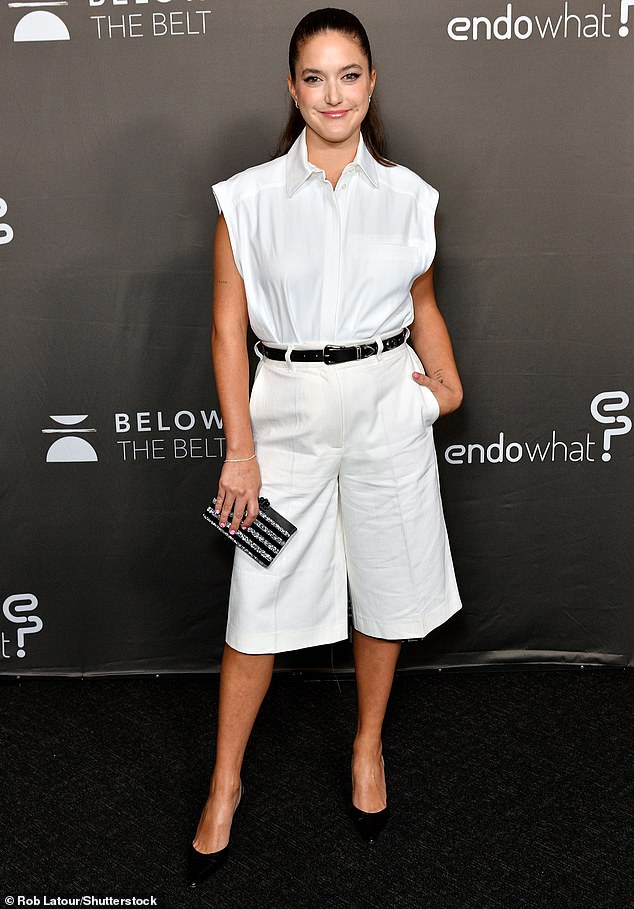 Beautiful: Alaia Baldwin, Hailey Bieber’s older sister, was also in attended at the Below The Belt screening in Los Angeles

She was seen posing in a group photo with Jamie Foxx and his daughter, Corinne. Similar to her stylish daughter, Isabel wore an ensemble comprising of the same triangle pattern and material.

Along with serving behind the scenes as an executive producer, Rosario has been working on both the Disney+ series, The Mandalorian and also the Hulu miniseries, Dopesick.

The critically acclaimed drama has been nominated for a number of awards and accolades, including Golden Globes and Emmy Awards. During the 2022 Emmys held last month in September, Michael Keaton was honored with an Emmy for Lead Actor for his role in Dopesick. 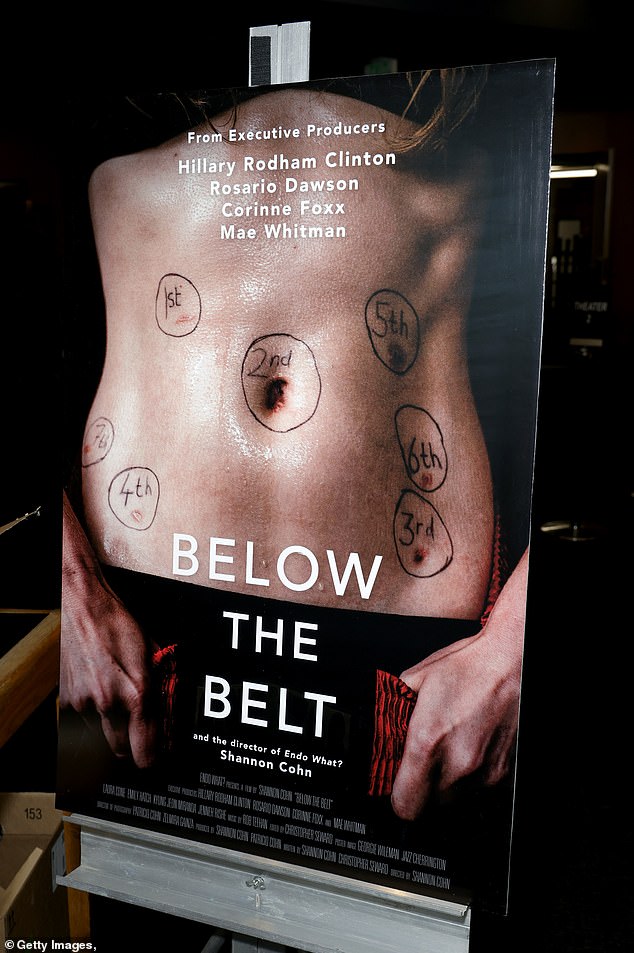 A message: Shannon Cohn, the director and producer of the documentary, also suffers from endometriosis herself