An album of photographs showing the aftermath of the Battle of Rorke’s Drift, belonging to the British officer who won a Victoria Cross for leading the valiant 12-hour defence of a British garrison, has emerged 141 years later.

Lieutenant John Chard compiled the album following the battle – which was later immortalised in the 1964 film Zulu starring Stanley Baker as Chard and Michael Caine as Lieutenant Gonville Bromhead.

Chard led the 150-strong British garrison in repelling 4,000 Zulu warriors during the siege, soon after British imperial forces had invaded Zululand to tighten their grip on South Africa.

Taken some time after the battle, the images in his album include views of the mission station which came under attack and the surrounding hills from which the thousands of Zulus would have appeared on the horizon.

The store house: Taken in the aftermath of the Battle of Rorke’s Drift 141 years ago, this picture shows part of the mission station which saw ferocious fighting between a 150-strong British garrison and some 4,000 Zulu warriors. The photograph belonged to Lieutenant John Chard, who won a Victoria Cross for leading the valiant defence of the garrison 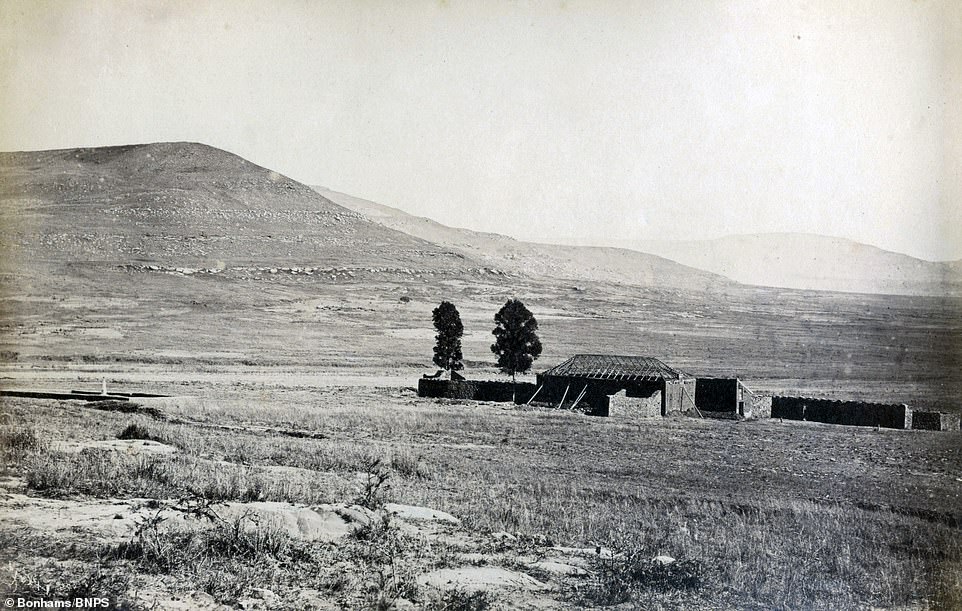 Run for the hills: The Zululand landscape from which the native warriors would have appeared, storming the colonial garrison only hours after a British debacle at nearby Isandlwana which saw hundreds of soldiers killed. While some of the Zulu warriors were armed with muskets and rifles, many of them confronted the British colonial forces with only shields and spears 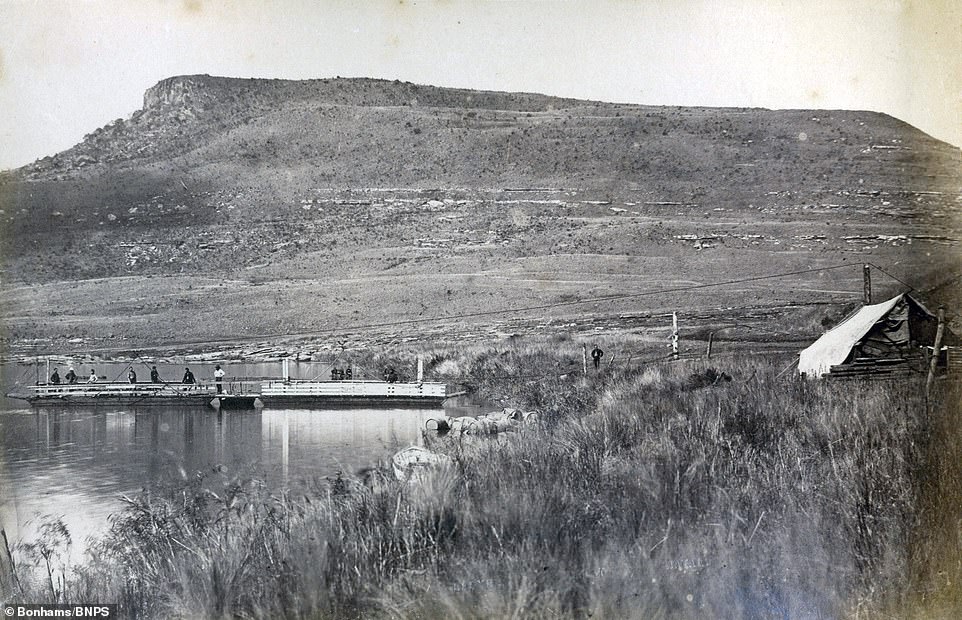 Crossing the bridge: A pontoon over the Mzinyathi River – also known as the Buffalo River – beneath Signal Hill, close to the British mission station at Rorke’s Drift which came under attack in the famous battle. British forces had established a depot here before advancing into the Zulu kingdom following their January 1879 invasion 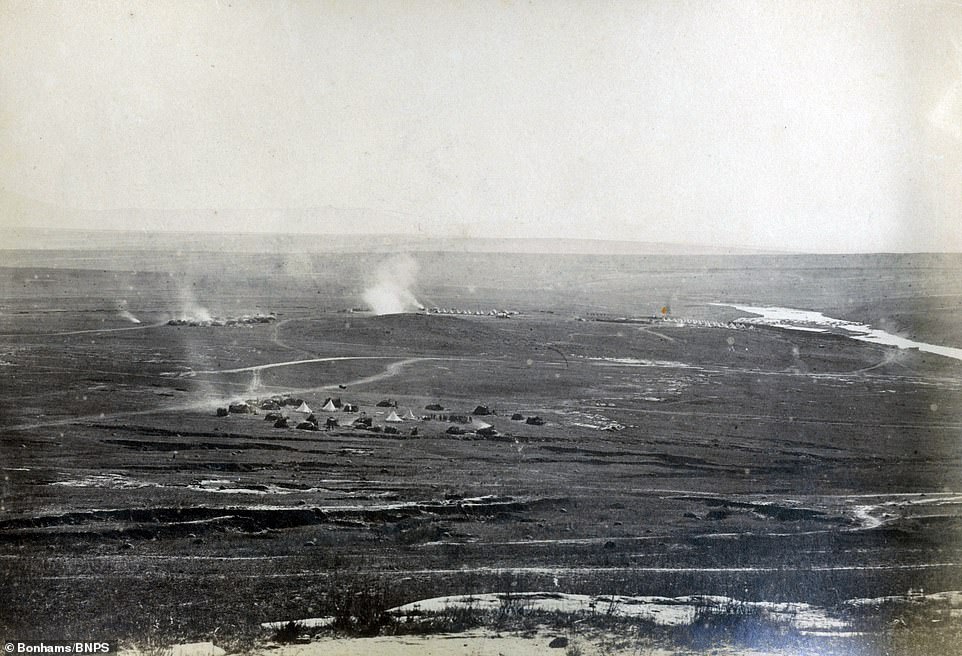 Battlefield: A view of Rorke’s Drift with the river in the background. Chard was among those who responded to news of the approaching Zulus, who had already killed hundreds of British invaders at nearby Isandlwana. After a meeting between Chard and other Britons on the scene, it was decided to mount the defence of Rorke’s Drift rather than retreat from the station 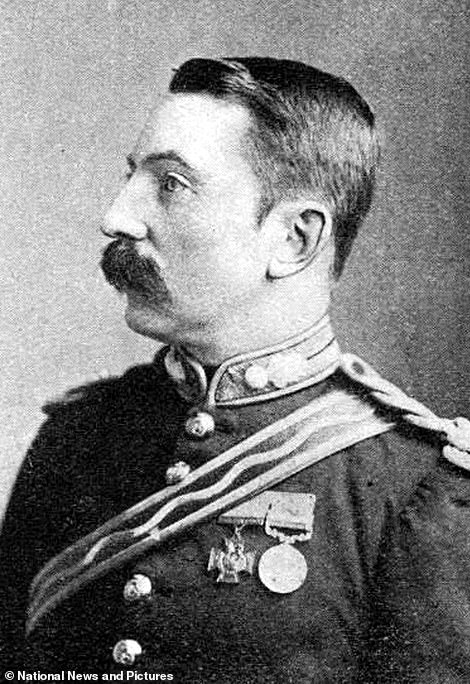 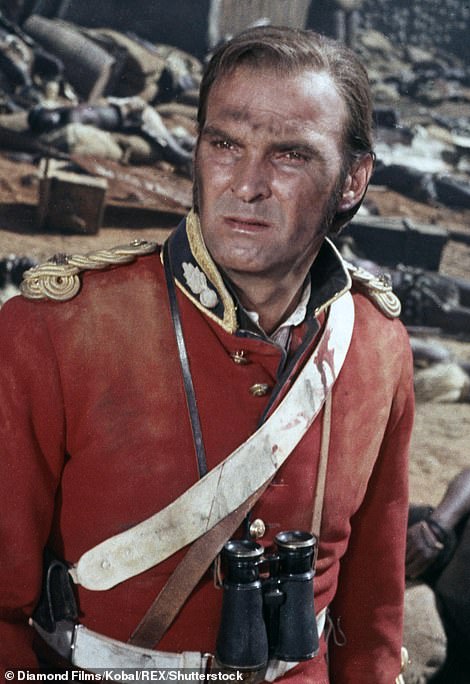 The British garrison was commanded by Lieutenant John Chard (pictured left), who was played by Stanley Baker (right) in the 1964 film Zulu which told the story of Rorke’s Drift

As well as Rorke’s Drift, Lt Chard’s album contains views of the aftermath of the British debacle at the Isandlwana camp six miles away, shortly before the more famous battle.

After 20,000 Zulus had surprised the British encampment, killing hundreds of troops, some of the African warriors pushed ahead to Rorke’s Drift where Chard and his men started setting up barricades.

Some of the Zulus had muskets and rifles, but they were poorly trained and most of them were equipped with only shields and spears, meaning they could be fought back by the British defenders.

As fighting raged for 12 hours, British officers shot some of the Zulus dead and fought off others who had climbed into the garrison. At the end of the battle, 400 Zulus and 17 Britons had died.

The battle became the subject of folklore, and the later Hollywood movie, but it was another six long months of fighting before the Anglo-Zulu war was over. 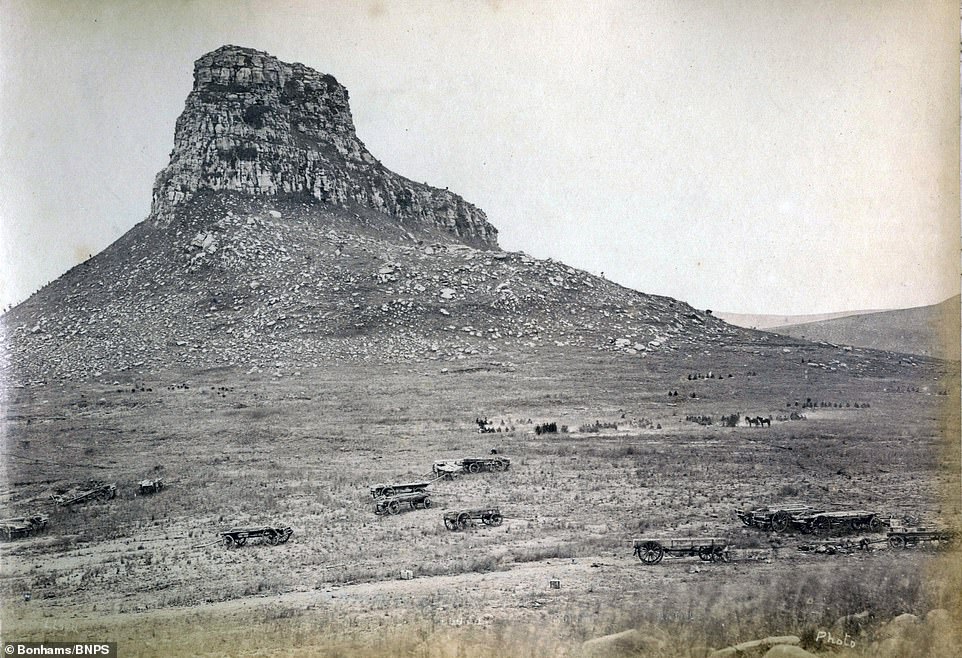 Isandlwana: The aftermath of the battle which took place hours before Rorke’s Drift and had a very different outcome, with more than 20,000 Zulus overrunning the British camp at Isandlwana – killing most of the 1,700 British troops there. Thousands of Zulus then continued to Rorke’s Drift where the British garrison had more success fending them off 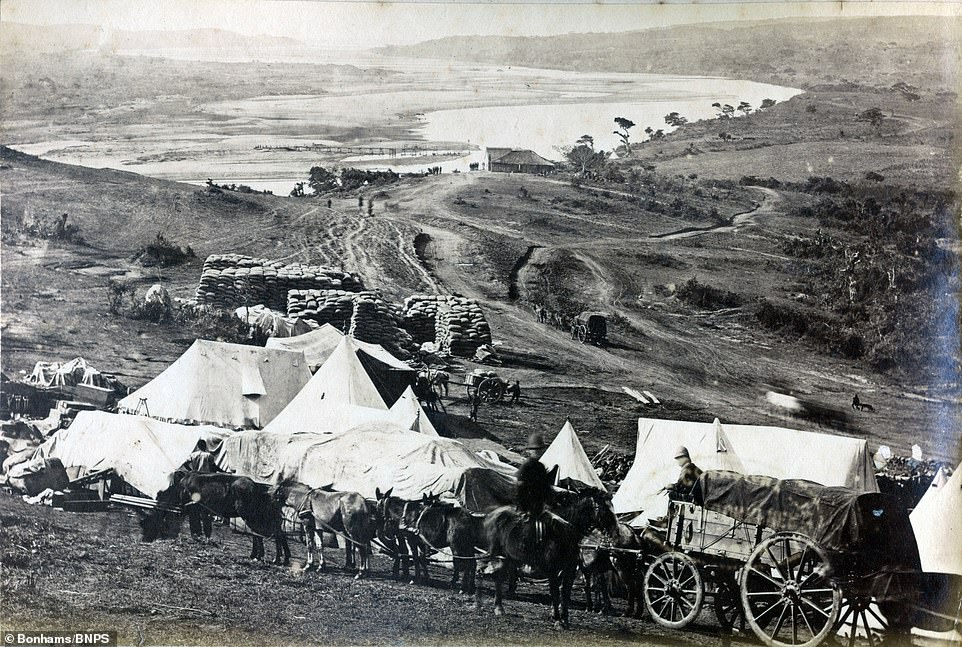 Fort Pearson: Days before Rorke’s Drift, this was where British forces crossed the Tugela River to invade Zululand in January 1879, after the expiry of a British ‘ultimatum’ which demanded that the Zulus dismantle their military strength.  British military historians call it a ‘cynical proposal devised solely to be refused’ so that Britain could cement its control of South Africa 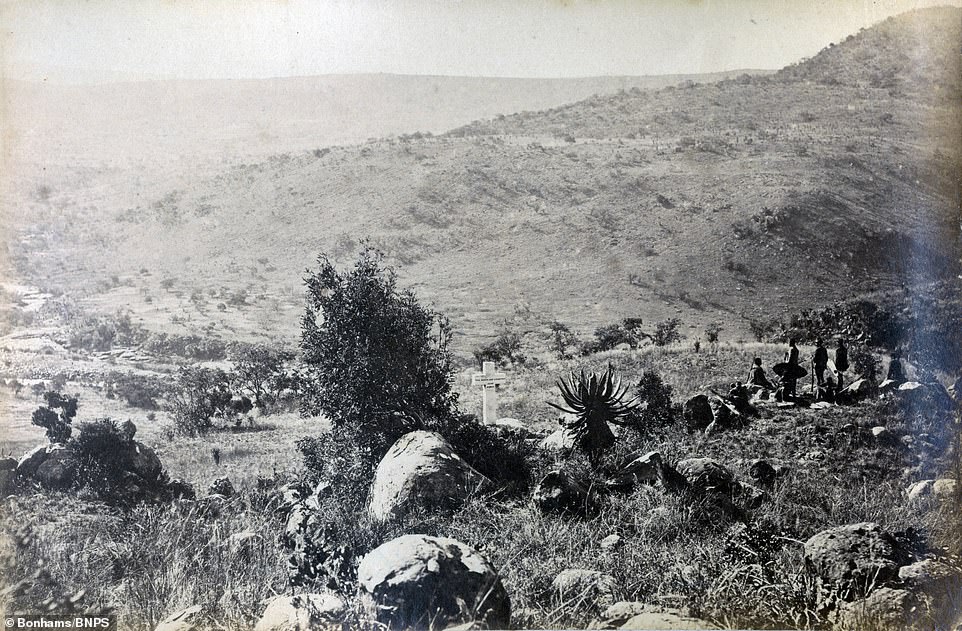 Zulu warriors: A group of native people stand on the hillside overlooking part of Zululand, the territory that was invaded in what became the Anglo-Zulu War. With war looming for some time before the British invasion, the Zulus had already obtained some modern weapons including muskets and rifles, but most of them were not trained in how to use them 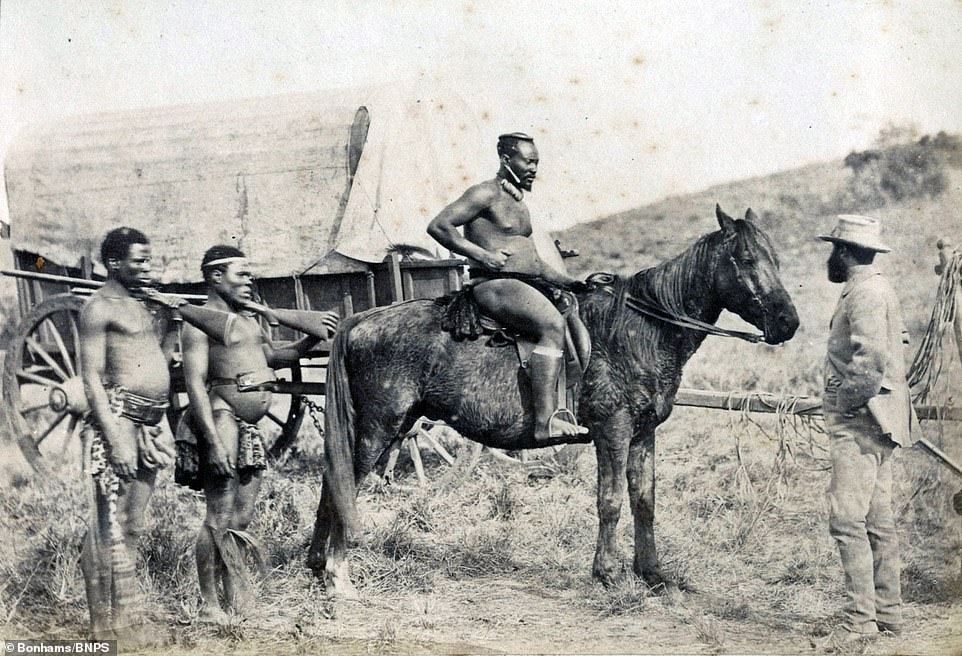 Meeting: A Zulu chief on horseback speaks to the British diplomat John Dunn while two Zulu warriors holding rifles look on. Dunn acted as an intermediary between British forces and the Zulu ruler Cetewayo, even becoming the ruler of part of the Zulu kingdom – although he later took Britain’s side during the war. He is also thought to have taken dozens of Zulu wives 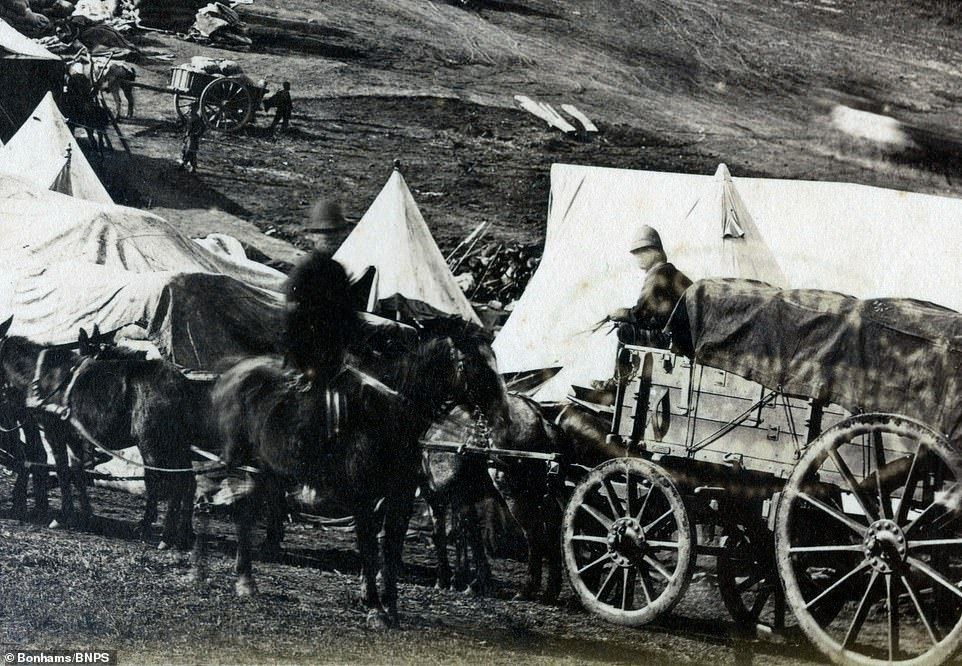 Encampment: British men and animals at Fort Pearson, which was built by the Tugela River at what was one of three main points of entry to Zululand. Colonel Charles Pearson led a column of 5,000 men, 384 ox wagons and nearly 3,400 oxen over the river in a process that took several days before the entire British force was finally on the Zulu side of the water

Chard’s photo collection also includes a number of photos of Zulu natives, including a chief on horseback talking to the diplomat John Dunn, watched by two warriors armed with rifles.

At the back of the album are Chard’s pictures of Balmoral Castle where he was invited by Queen Victoria upon returning to Britain to a hero’s welcome.

The album being sold by Chard’s family belongs to a wider archive which also includes his own handwritten memoirs of the battle in which 11 VCs were awarded to the defenders.

The album is expected to sell for £5,000 at London auctioneers Bonhams. 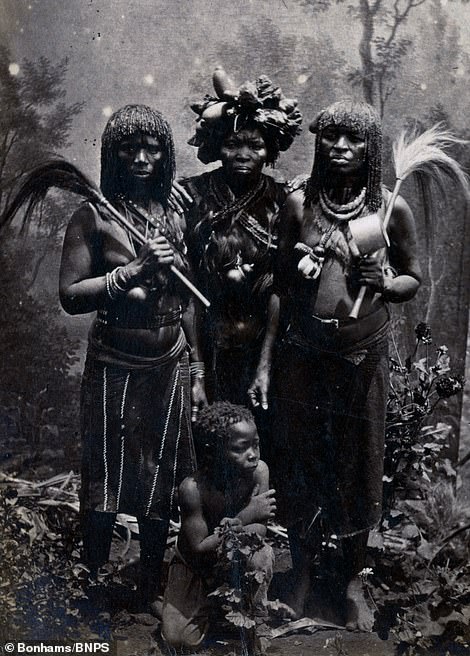 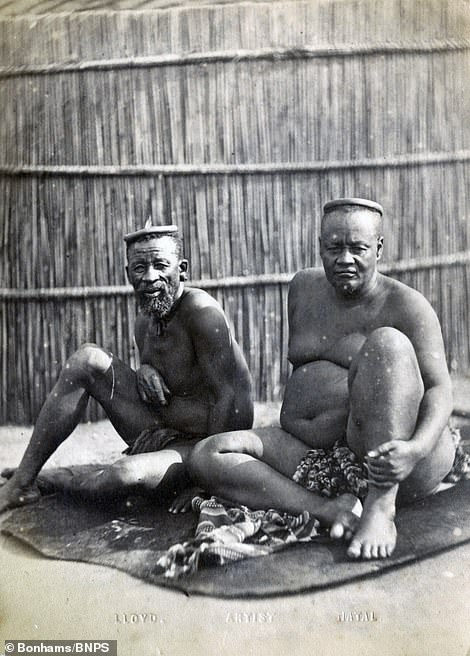 Scenes from Zululand: The photo album also includes these pictures of Zulu people, with the women on the left described as traditional ‘witch doctors’. Although regarded as ‘spear-wielding savages’ by the Victorian public back in Britain, the Zulus were a ‘highly organised military society’ which grouped its young men into tightly-controlled regiments, historians say 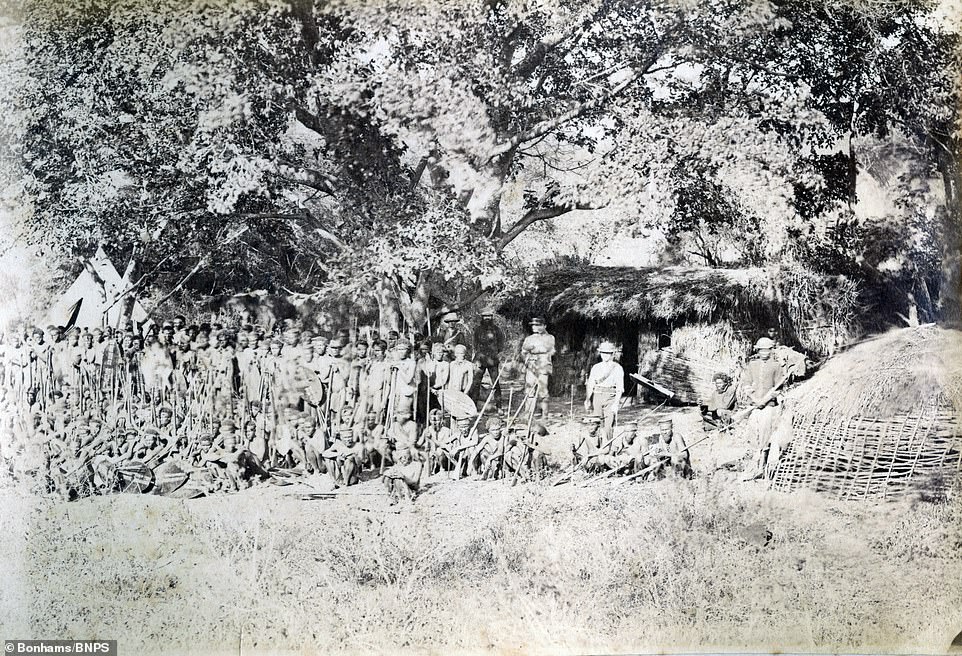 New Guelderland: This photo shows people lining up in front of a Zulu enclosure, known as a kraal, in the village of New Guelderland which is named after an area of the Netherlands. Dutch settlers had been in South Africa for centuries, and their descendants were known as the Boers – who, along with the Zulus, were another threat to British dominance in South Africa 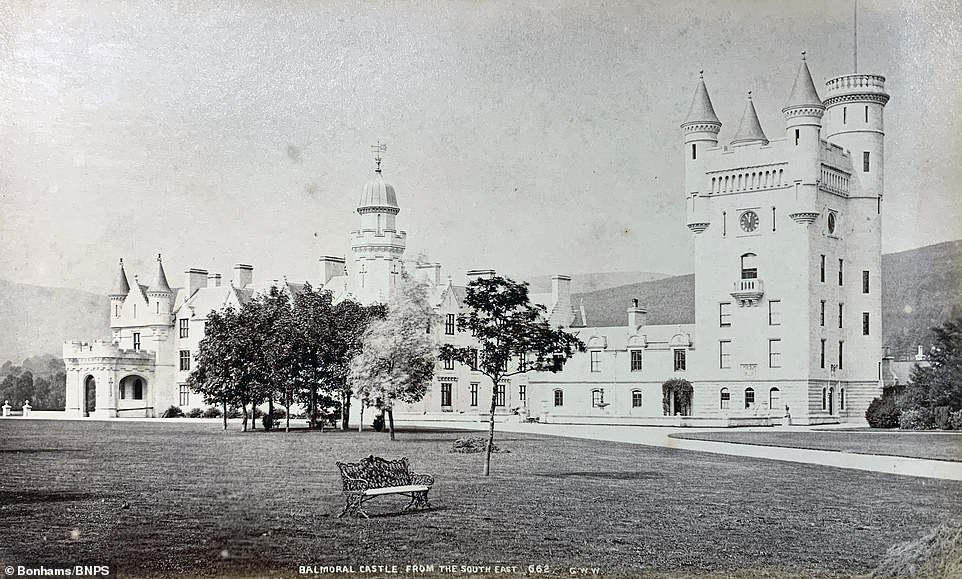 Hero’s welcome: Chard’s album also includes this picture of Balmoral Castle, where he was invited by Queen Victoria upon returning to Britain, and honoured with the military award that bears her name. Chard was given the VC for ‘gallant conduct’, with colleagues reporting that he and Bromhead had acted with ‘intelligence and tenacity’ during the 12-hour battle 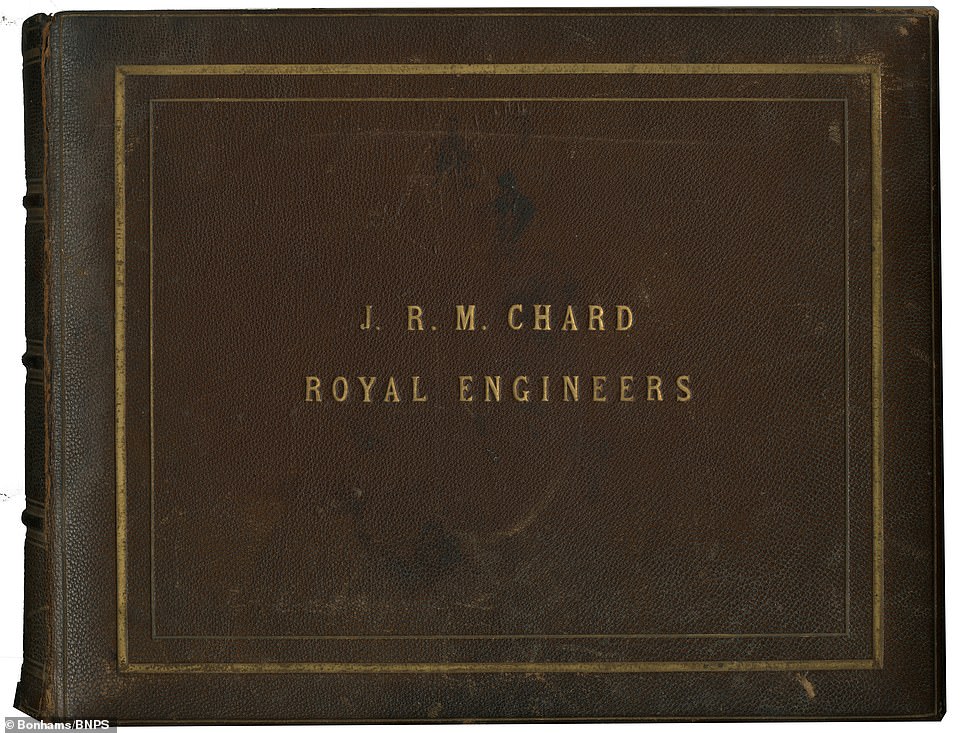 Collection: The album belonging to Chard, which is being put up for sale by the military hero’s family and is expected to attract a £5,000 bid at a London auction. It is part of a wider archive relating to the lieutenant, which also includes his own handwritten memoirs of the battle which led to 11 Victoria Crosses being handed out to the defenders

Luke Batterham, a books and manuscripts specialist at Bonhams, said: ‘It is a typical 19th century album with his name JRM Chard Royal Engineers on the front of it.

‘The one of the Rorke’s Drift camp is particular nice as it shows this large expanse of land and the hills around it and it gives you an idea of what it must have been like and conjure up up the image of the sight of 4,000 Zulus approaching.

‘They are interesting and evocative and pretty scarce but the key thing is who the album belonged to because John Chard is such a great historical figure. It was his album that he kept as a reminder of this extraordinary event.’

What happened at Rorke’s Drift? How 150 British soldiers held off 4,000 Zulu warriors in 1879 battle

On January 11, 1879, a British force invaded Zululand to cement imperial control of South Africa. The Zulus had been given an ‘ultimatum’ to disband their military forces, but refused to comply.

The British forces under Lieutenant-General Lord Chelmsford set up a camp at Isandlwana, but they were humiliated on January 22 when more than 20,000 Zulus overran the camp in a surprise attack.

Another 4,000 Zulu warriors then continued to a British mission station at Rorke’s Drift, on the banks of the Buffalo River, where the British garrison had only 150 men.

In a battle which continued into the night and the morning of January 23, the British garrison fought off the Zulus in a 12-hour defence led by Lieutenant John Chard and Lieutenant Gonville Bromhead. 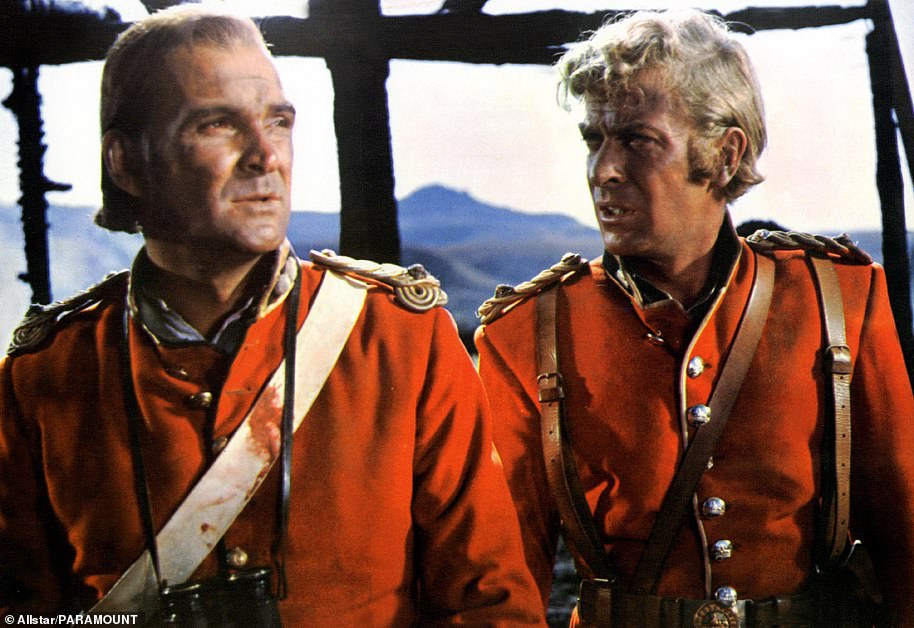 Chard and others had decided to defend the garrison despite the news from Isandlwana, fearing that any attempt to escape would leave them exposed in the open countryside.

The British forces repelled the attackers – some of whom had rifles and muskets, but most of whom were carrying only spears and shields – with accurate shooting and brutal hand-to-hand combat.

The Zulus were eventually forced to retreat with 350 of their number killed compared to 17 British. The British force was rewarded by Queen Victoria’s government with no fewer than 11 Victoria Crosses.

The battle was part of the wider Anglo-Zulu war took place during 1879, which would eventually result in a British victory and the carving up of Zulu territory.

Chard compiled his photo album with images taken after the battle – which was later immortalised in the 1964 film Zulu starring Stanley Baker as Chard and Michael Caine as Bromhead.