Rookie prison warder, 21, with just 10 months experience was left in charge of entire wing of violent offenders at privately-run jail

A rookie prison warder was left in charge of an entire wing of violent offenders at a privately-run jail.

The 21-year-old was just ten months into the job after giving up employment as an installer of stair bannisters.

Succumbing to pressure from a ‘Mr Big’ who threatened to have his family home torched, Levi Simic smuggled in phones to inmates.

Simic was working on B wing at HMP Forest Bank, a category B jail in Salford run by Sodexo.

He has now been jailed for six months for concealing two iPhones in his work boots. They were found when he was searched on clocking in for duty last October.

Succumbing to pressure from a ‘Mr Big’ who threatened to have his family home torched, Levi Simic smuggled in phones to inmates. Simic was working on B wing at HMP Forest Bank, a category B jail in Salford run by Sodexo

When challenged, he insisted: ‘They have threatened my family – it’s not something I wanted to do.’

Minshull Street Crown Court in Manchester was told Simic had to deal with 97 inmates – often single handedly – even though many were in jail for violence.

The Mr Big, who was serving 12 years behind bars for a ‘torture’ kidnapping, had him followed home after a shift and then issued threats against his family saying: ‘I know where you live.’

The 33-year-old gangster warned Simic, pictured, that his grandmother, mother, seven younger siblings and his six-month-old niece would be harmed if he refused to co-operate.

Simic’s lawyers called for him to be given a suspended sentence but Judge Mark Savill told him: ‘Bringing phones illegally into the prison system is a serious issue. You are a young man and before this offence had lived a life full of promise. 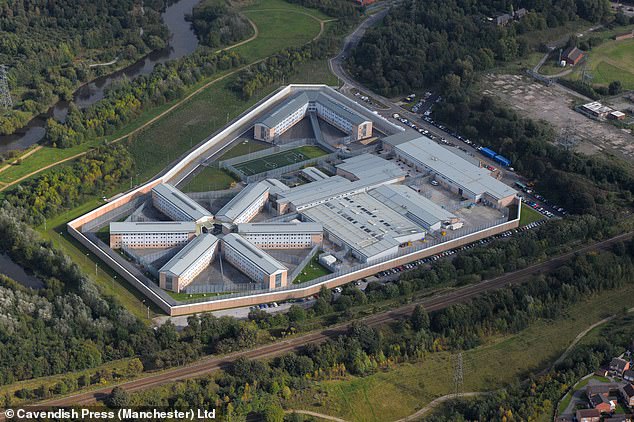 Simic was working on B wing at HMP Forest Bank, a category B jail in Salford run by Sodexo

‘But unfortunately while working hard and successfully as a prison officer you succumbed to threats and pressure brought upon you by an inmate to throw all this away.’

John Kennerley, prosecuting, told the court: ‘He knew full well that articles such as phones cannot be taken into prison. He didn’t even take his own phone into prison.

‘The background he told was that he must have been followed home and a prisoner then said he knew where he lived. That prisoner then threatened to have the defendant’s house petrol-bombed and the defendant agreed to take the phones into prison.’

Ronan Maguire, defending Simic, who admitted bringing a prohibited item into prison, said: ‘This is a very sad case for a young man who perhaps was given responsibilities he should not have been given at a very early stage in his career.’

Tory MP Sir Bob Neill, who is chairman of the Commons justice committee, said: ‘The Justice Department needs to have a full report on why it happened. It’s important that there are sufficient people to man the wings properly and securely.’

A spokesman for HMP Forest Bank said a custody officer’s job was often demanding and preventing illicit items entering a jail was vital.