Belle of the ball! Ron DeSantis celebrates start of his second term by dancing at Inaugural Ball with wife Casey… and their three children

Ron DeSantis hosted 4,000 people for his Inaugural Ball in Tallahassee, Florida where he danced with his wife Casey to the song Sweet Florida and guests enjoyed extensive h’ordeuvres and an elaborate brass band.

First lady Casey DeSantis stunned guests in a gold embellished ballgown reminiscent of Disney princess Belle from Beauty and the Beast – with one attendee calling her a ‘class act’.

Florida’s first couple danced on stage to Frank Sinatra’s ‘Fly Me to the Moon.’ Soon after they did some fun dancing with their children Madison, Mason and Mamie on stage and walked out to a song written by the band Van Zant as an ode to DeSantis.

Governor Ron DeSantis twirled his wife and first lady Casey DeSantis, who donned a gold tea-length ballgown, during an on-stage dance at his second inaugural ball on Tuesday 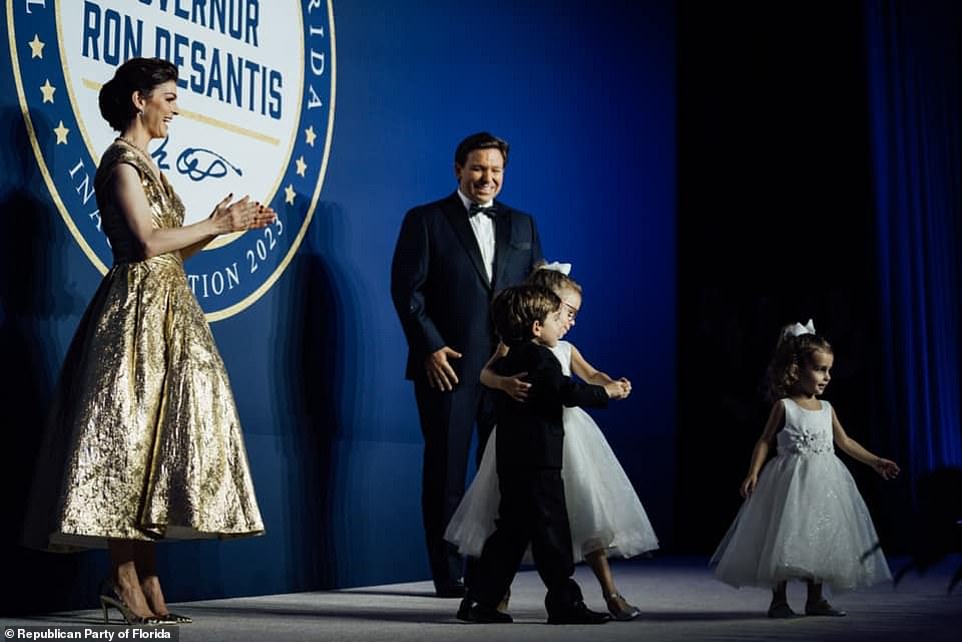 The first couple watched and smiles as their three children, Madison, Mason and Mamie, dance on stage at the inaugural ball

Sweet Florida’s first verse says DeSantis ‘stands up for what he believes’ and warns people not to ‘come down here trying to change things.’

Other than that first dance and stage appearance, most guests say that they didn’t see much of the couple throughout the night.

Attendees had mixed reviews of the inaugural ball, which could be indicative of whether or not they were able to clinch a VIP ticket. Guests leaving said that the event at the Donald L Tucker Civic Center was segregation between VIP and general admission.

A man leaving the ball around 8:00 p.m. described the VIP section as ‘where the actual party was.’

Bernice, 79, from Boca Raton, said the event was ‘too crowded’ and that it was a ‘fire hazard’ – she also described it as ‘COVID heaven.’

The tax collector for Franklin County, Florida told DailyMail.com that the ‘enthusiasm of the crowd was the best I’ve ever seen for any inauguration’ – and he’s been to several. 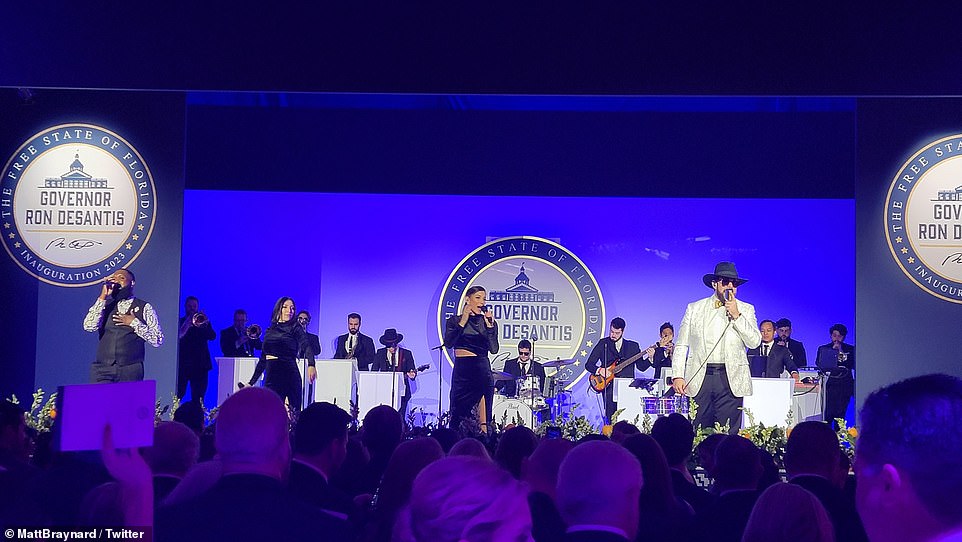 A brass band with four singers entertained the approximately 4,000 guests 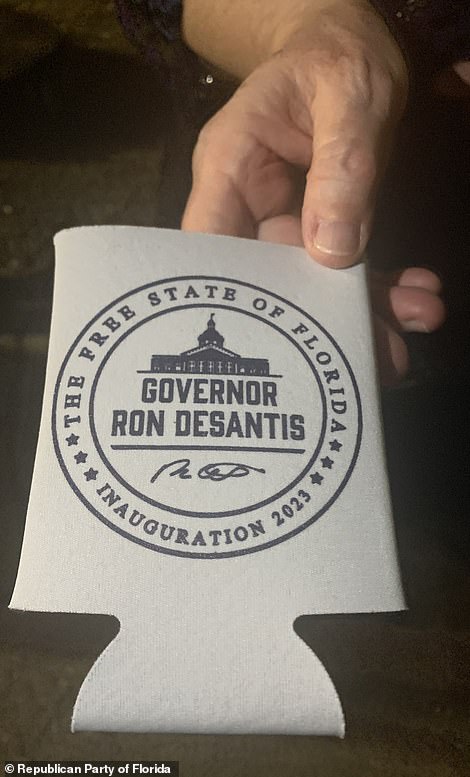 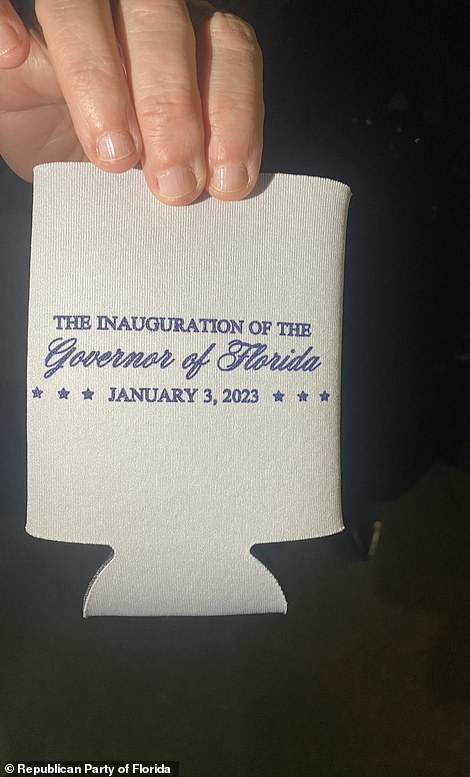 Other than dancing in the large open arena, guests were also welcomed to take photos at a station that included a hedge wall and the logo for DeSantis’ inauguration week, which includes his overarching motto: ‘The Free State of Florida.’

Pink and purple uplighting was scattered throughout the arena, guests described to DailyMail.com, and some ‘finger food’ included desserts, fruit and chicken and waffle skewers.

The Inaugural Ball brings a close to the festivities surrounding the start of Governor DeSantis’ second term in the Sunshine State amid rumors that he could launch a presidential run in 2024.

A program from the Inaugural Ball seen by DailyMail.com lists out the sponsors for the inaugural events. Some of the donors include ABC Fine Wine and Spirits, CVS Health, and Dosal Tobacco Corporation, among dozens of others. 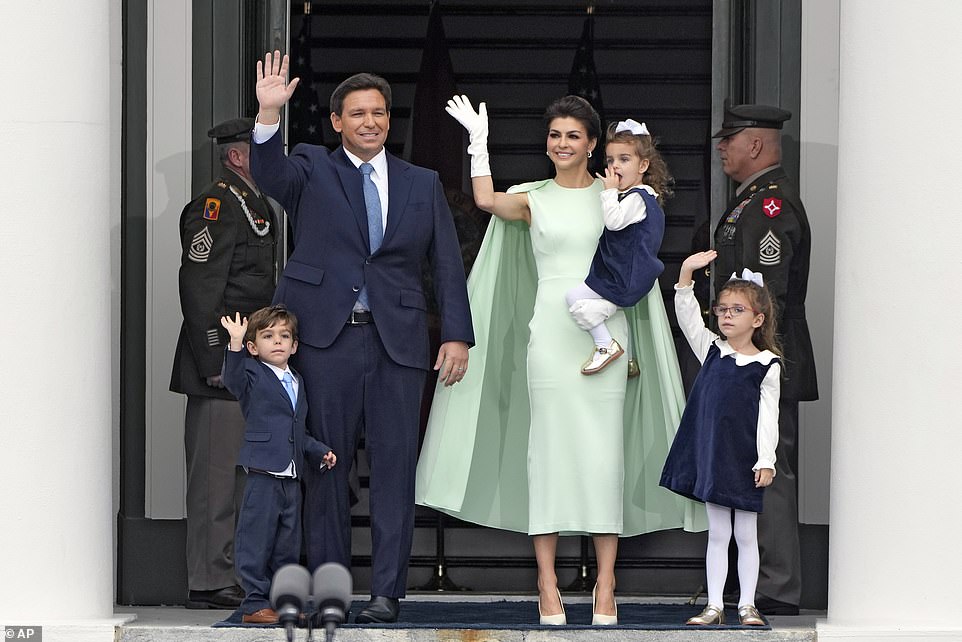 Florida Governor Ron DeSantis arrives at his swearing-in ceremony at inauguration on Tuesday, January 3, 2023 with wife and Florida first lady Casey DeSantis and their three children Madison, Mason and Mamie 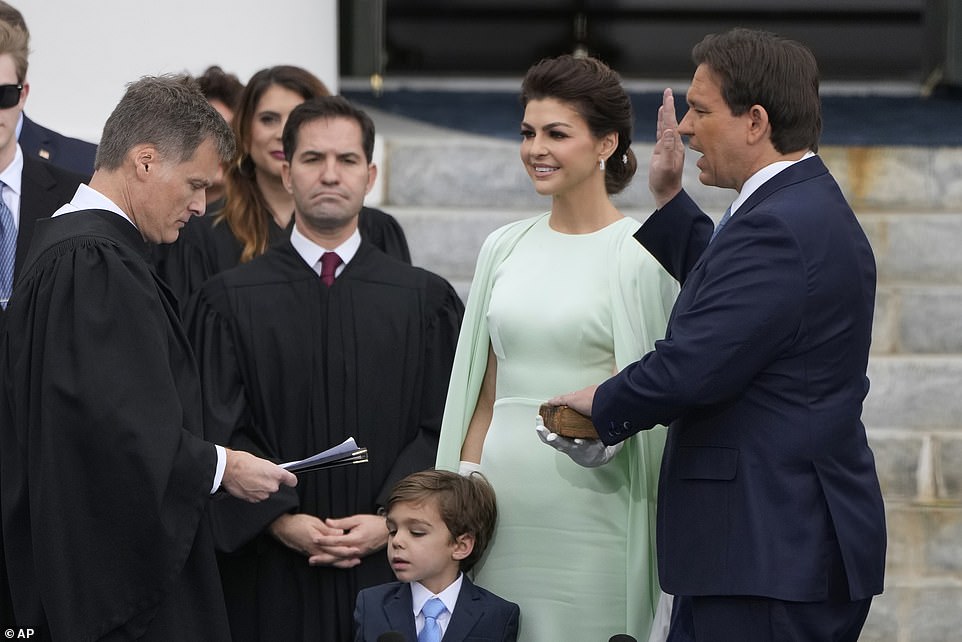 DeSantis took his oath of office Tuesday, December 3, 2022 for his second term as Florida governor, while speculation swirls of higher ambitions for federal office 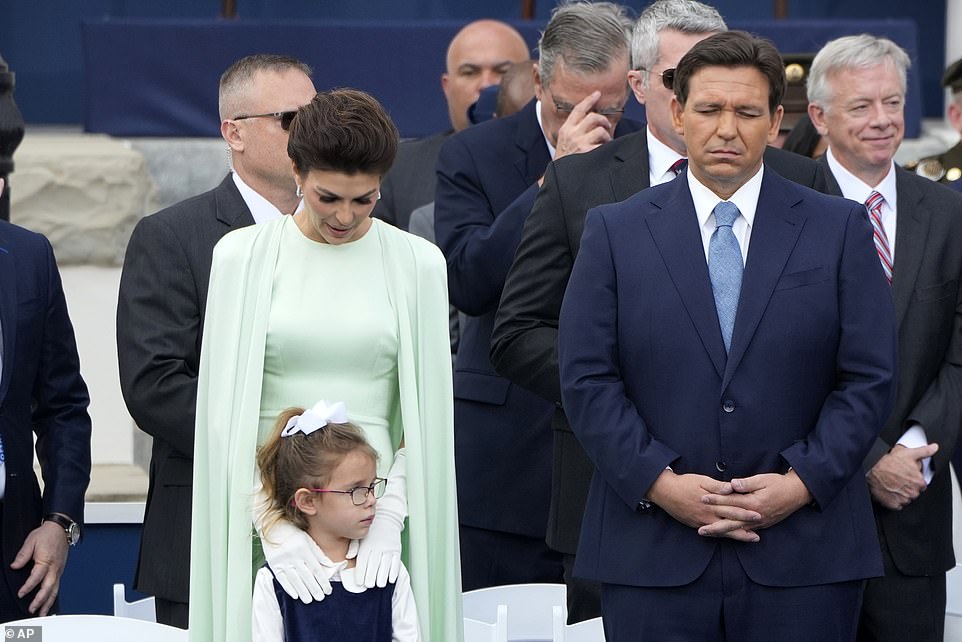 Casey stands over daughter Madison as she and husband Ron DeSantis bow their heads during a prayer at inauguration on Tuesday, December 3 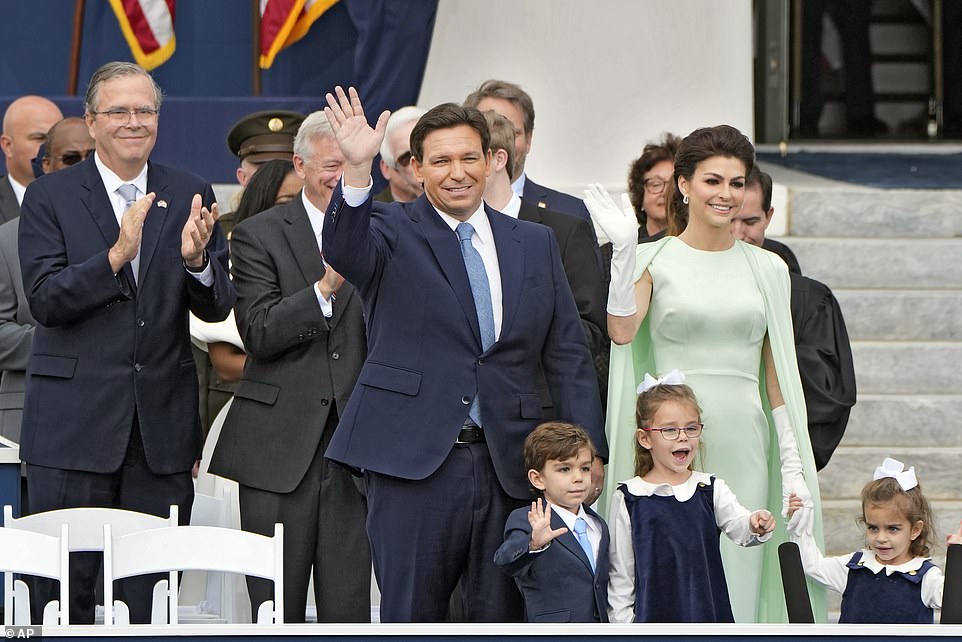 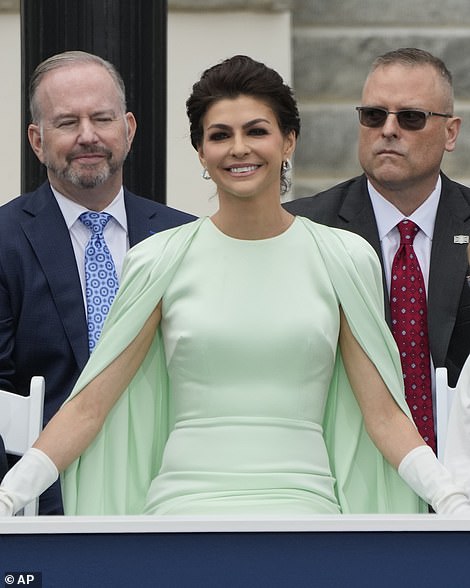 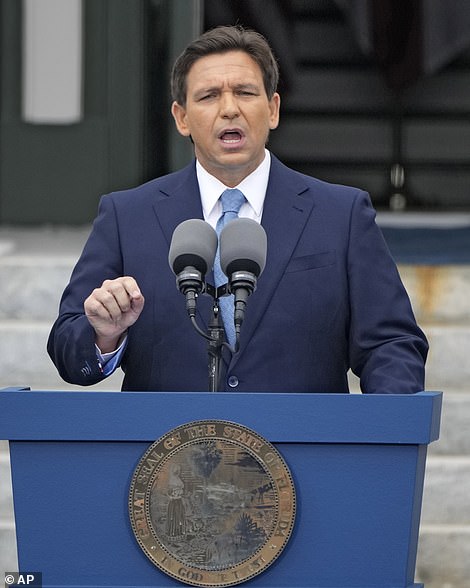 Casey DeSantis went all out for inauguration in a show-stopping tea-length mint-green dress complete with an attached cape and mid-arm white gloves. Her image was very in-line with how a presidential spouse would appear – her hair in a neat low Jackie-O-esque bun with minimal jewelry