Taking the plunge! Romantic moment man proposes to his fiancée 10ft underwater on the seabed of a cove in Jamaica

This is the romantic moment a man proposed to his fiancée on the seafloor of a Caribbean cave.

Kody Workman, 33, from Grand Haven, Michigan, popped the question to Kelly Castille, 34, from Lake Charles, Louisiana, when the couple were 10ft underwater in a picturesque cove in Negril, Jamaica.

Photographer and videographer Kody presented his partner-of-three years with a ring while they were swimming in the exotic holiday destination on October 1.

Kelly, also a photographer and videographer, couldn’t believe the proposal and swum up to the surface to ask: ‘Is this for real?’

She then said ‘yes’ before embracing Kody while their friend caught the sweet moment on film.

Kody Workman, 33, from Grand Haven, Michigan, popped the question to Kelly Castille, 34, when the couple were 10ft underwater in a picturesque cove in Negril, Jamaica (pictured)

Kody had bought the two carat cushion cut diamond ring back in July, but was waiting for the perfect moment to propose to Kelly.

‘The day before I proposed, we took a short sailing trip on the edge of the island and we went into this cave and I thought it was perfect,’ he said.

‘I had the ring with me but then a storm came in so we had to sail back.

‘I chatted with the people at the resort and they helped me arrange another boat for the next day.’ 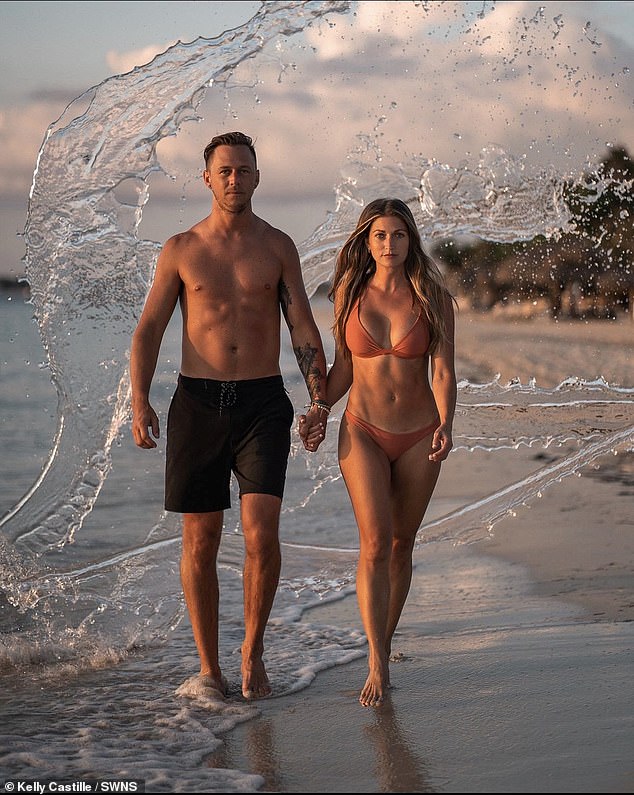 Photographer and videographer Kody presented his partner-of-three years with a ring while they were swimming in the exotic holiday destination on October 1. Pictured, in Negril, Jamaica

He asked Kelly to swim down to the seafloor and explained he wanted to get some pictures of them kissing underwater.

Kody added: ‘She had no idea I had the ring in my back pocket. I waited for her to go first and when she looked up. I was already there with the ring.’

Kelly said the moment was a complete surprise as she thought they were taking pictures for their travel Instagram account @positravelty.

She said: ‘I honestly didn’t know what was going on. I saw the ring and thought: “what is he doing?” But it was absolutely perfect and it was the highlight of my year.’

The couple met in October 2017 in Panama, when Kody was bartending at a hostel where Kelly checked in as a guest.

They have been together ever since and have travelled the world together, living in Panama, Bali, Thailand and South Africa.

Kody and Kelly have tentatively begun planning their wedding for May next year, but admitted that the current coronavirus surge has left them unable to make many arrangements.

‘We are waiting but ultimately we would love to get married in Greece on the island of Crete,’ Kelly added. ‘We are waiting to see how the world opens up.’