CITY WHISPERS: Rolls-Royce is officially ‘down with the kids’ – or at least those who like to dabble in the markets

Rolls-Royce is officially ‘down with the kids’ – or at least those who like to dabble in the markets.

The FTSE 100 engineer was one of just three British companies to appear in a list of the ‘most-held’ shares of eToro users in 2022. The average age of the investment platform’s customers is 34, putting it at the younger end of the online trading market.

Its list of the 20 most-held shares by DIY investors in the UK was, unsurprisingly, dominated by US Big Tech, with a few ‘meme stocks’ such as GameStop and AMC Entertainment thrown in for good measure.

‘Down with the kids’: The FTSE 100 engineer was one of just three British companies to appear in a list of the ‘most-held’ shares of eToro users in 2022

But below Tesla, Amazon, Apple and the like, Rolls-Royce finished in seventh place, easyJet in ninth and IAG, owner of British Airways, in 20th.

Perhaps retail investors are desperate to go on holiday and prop up their favourite airlines – but it goes to show that even being an oldie on the stock market can still mean you’re a goodie.

Nanoco shareholders celebrated a settlement with Samsung last week, just before a David and Goliath-style trial was about to start in a Texas court. 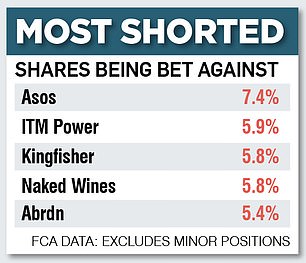 Executives had already flown out to the Lone Star state when the settlement was announced.

The litigation may be settled, but the jury’s still out on whether executives used the time to buy celebratory Stetsons and cowboy boots…

Things heat up at Chill Brands 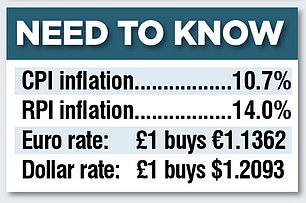 Things are far from calm at cannabis firm Chill Brands after it launched legal proceedings in a US court in early December.

The action has been brought against former chief commercial officer Michael Sandore, whom Chill says in court filings represented himself as Chill’s CEO on Twitter before being let go and that he later went to work for a competitor.

It argues that this breached a non-compete agreement.

He is also said to have made ‘disparaging’ remarks against the group’s then bosses. Sandore disputes the claims. Chill announced the case in half-year results last month that showed the firm, backed by Stagecoach co-founder Dame Ann Gloag, made a £2.2 million loss in the six months to September 30. Not an ideal time to be facing legal fees.

SSP could be on track to rattle shareholders

Could Upper Crust and Ritazza owner SSP be on track to rattle shareholders again at its next annual meeting?

Its yearly report, published last week, showed chief executive Patrick Coveney received £1.1 million in 2022. This is much more than the £800,000 received by his predecessor Simon Smith in 2021.

That package prompted a revolt that saw more than 20 per cent of votes cast against high pay – a pushback that was enough to put SSP on the Investment Association’s naughty list.

At that time the business was being ravaged by the pandemic, so Coveney’s remuneration may be better received on February 16 – though the board may be bracing themselves for a kicking, just in case.