Roger Stone arrived in Washington D.C. Wednesday as he faces sentencing Thursday for lying to Congress against a backdrop of explosive Presidential tweets and mounting pressure on Attorney General William Barr.

But the longtime Trump ally and political dirty trickster is unlikely to see the inside of a federal prison cell – at least for now.

Stone swerved the immediate threat of incarceration this week when US District Judge Amy Berman Jackson said she would postpone punishment while she decides whether the veteran GOP schemer deserves a retrial.

Stone was convicted last fall of lying to lawmakers over his efforts to procure stolen Democratic Party emails from WikiLeaks to boost Donald Trump’s chances of becoming President.

Roger’s here: Veteran dirty trickster Stone, 67, arrived in Washington D.C. the afternoon before sentencing for a series of crimes tied to the Robert Mueller probe 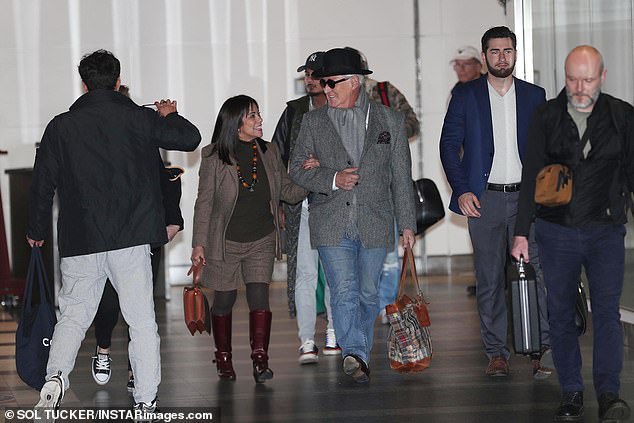 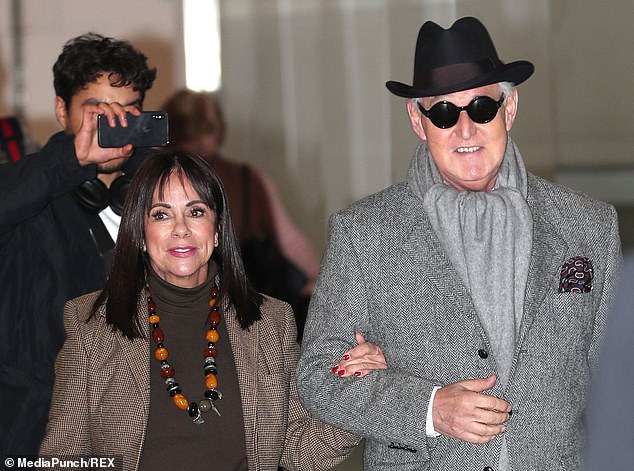 Subject of interest: Roger Stone and his wife Nydia had their pictures taken as they arrived in Washington D.C. for his sentencing, which takes place on Thursday

Arriving in style: Roger Stone was dressed in black tasseled loafers, denims and a large light gray scarf over a white shirt for the trip from Florida, accessorized with a black fedora, 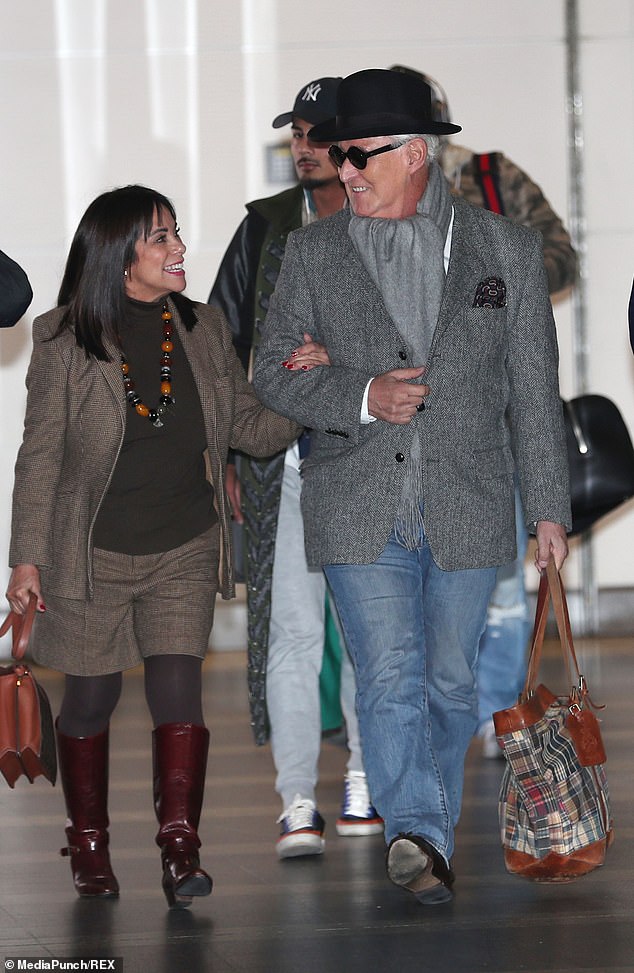 Together: Roger Stone’s wife Lydia was present throughout his trial and is expected in federal court Thursday for his latest hearing 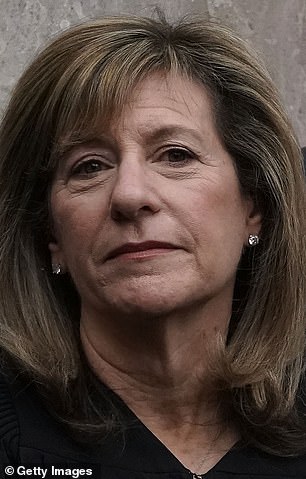 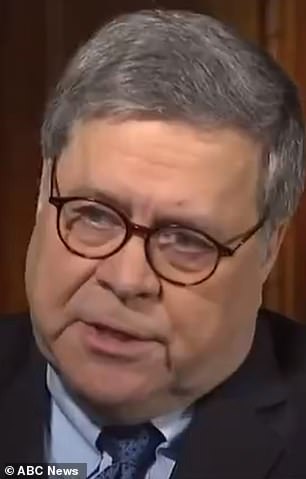 Lightning rod: Federal judge Amy Berman Jackson will sentence Roger Stone in a case which has caused a crisis to engulf Bill Barr who pleaded with Donald Trump to let him do his job and stop the tweeting about his Department of Justice 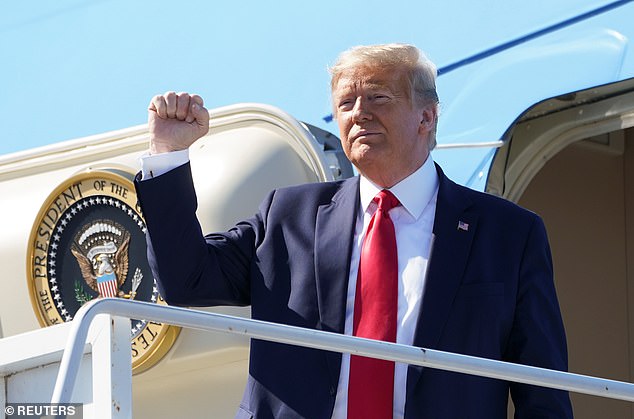 I’m in charge: Donald Trump claimed in response to Bill Barr’s plea to stop tweeting that as president he is the nation’s top law enforcement official 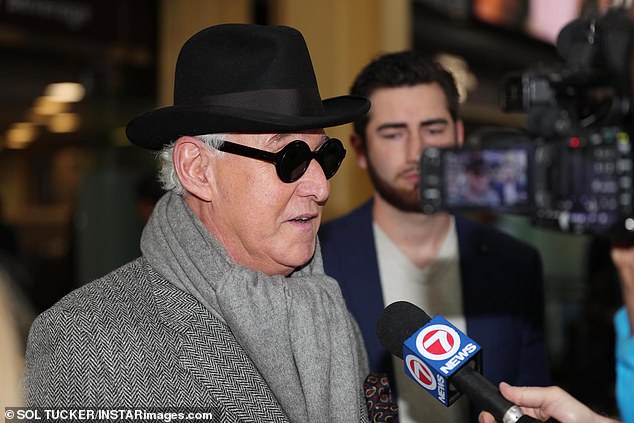 Gagged: Roger Stone was confronted by reporters at Reagan National Airport but is banned from speaking about the case by the judge 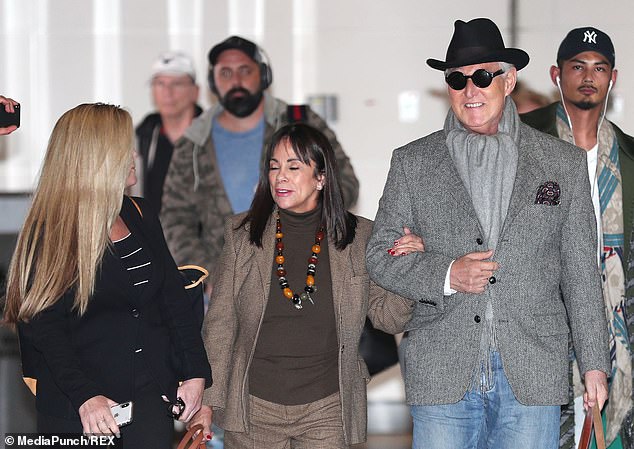 Statement hat: Roger Stone is subject to a gagging order but his long-term sartorial flair spoke for itself when he touched down in Washington D.C. from Florida for sentencing

But his lawyers filed a sealed motion last week alleging ‘juror misconduct’ after it emerged that the forewoman had posted anti-Trump messages on social media and re-tweeted commentary about Stone’s arrest.

Judge Jackson has vowed to press on with Thursday’s 9am sentencing regardless, despite repeated Twitter attacks from President Trump who has slammed the prosecution of 67-year-old Stone as unfair and ‘tainted’.

But it remains to be seen whether her punishment will be anywhere near as harsh as the seven to nine years originally requested by prosecutors before Barr triggered a political firestorm by ripping up their recommendation.

The original prosecution team of Aaron Zelinsky, Jonathan Kravis, Adam Jed and Michael Marando are not likely to be in court today after they resigned en masse over Barr’s intervention.

Stone is subject to a gag order for repeatedly taking aim at Judge Jackson in the lead up to last year’s proceedings, including mocking up a photo of her in rifle crosshairs.

But his proxies – including Trump – show no sign of shutting up.

The President exposed Barr to accusations of political interference last week by publicly praising the Attorney General’s decision to overrule his own prosecutors.

Barr denied intervening on Trump’s behalf but so far more than 2,000 former justice department employees have signed a petition calling on him to resign.

When he asked Trump to curb his explosive Twitter criticisms so he could get on with his job, the President flatly refused.

‘These were Mueller prosecutors, and the whole Mueller investigation was illegally set up based on a phony and now fully discredited Fake Dossier, lying and forging documents to the FISA Court, and many other things,’ Trump wrote Tuesday, bringing up a series of oft-repeated grievances about Robert Mueller’s Russia probe.

And then he said that he – not Barr – was the nation’s chief law enforcement officer. Barr was later reported to be considering resigning; his spokeswoman denied that he was resigning, but did not deny that he was considering his position.

Stone’s decades-long career on the shadier margins of US politics appeared to be over last November after he was found guilty of five counts of making false statements to Congress and single counts of obstructing a congressional proceeding and witness tampering.

Jurors agreed the smooth-talking agent provocateur, who briefly served on Trump’s 2016 Presidential campaign,told a series of ‘whoppers’ when he testified before members of House Intelligence Committee investigating Russian collusion in the 2016 election.

Stone lied about the identity of his ‘back channel’ to WikiLeaks and lied again when he denied asking its founder, Julian Assange, for the plundered trove of messages. 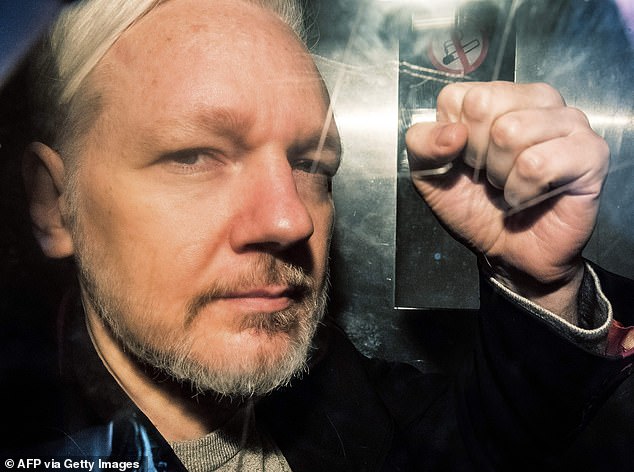 All about Assange: Roger Stone lied about the identity of his ‘back channel’ to WikiLeaks and lied again when he denied asking its founder, Julian Assange, for the plundered trove of messages 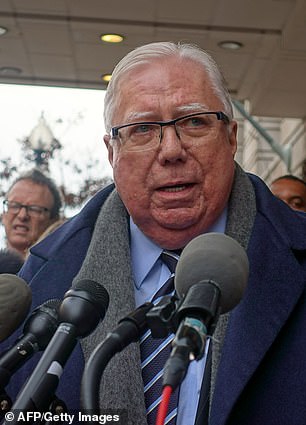 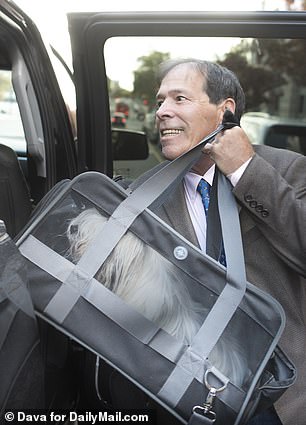 Back channels: Stone had fraudulently told lawmakers that Randy Credico (left), a left-wing radio comedian, was his ‘back channel’ to WikiLeaks when it was actually the conspiracy theorist and author Jerome Corsi (right) 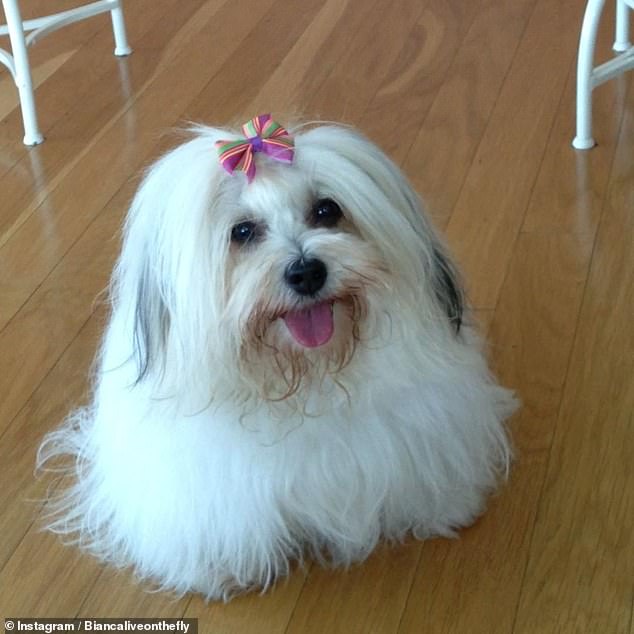 Center of case: Roger Stone  also took aim at Randy Credico’s therapy dog Bianca, a 13-year-old Coton de Tulear, writing in an text message: ‘I’m going to take that dog away from you.’

The net result of Stone lying to lawmakers ‘over and over and over again’ was that the House Intelligence Committee was impeded in its inquiries and its final report into Russian election inference was inaccurate because it didn’t mention Stone’s true intermediary, his trial heard.

The tampering charge referred to his effort to bully the comedian and radio host Randy Credico into pleading the Fifth so he would avoid contradicting Stone’s sworn September 26, 2017 testimony.

Former Richard Nixon-aide Stone had fraudulently told lawmakers that Credico was his ‘back channel’ to WikiLeaks when it was actually the conspiracy theorist and author Jerome Corsi.

When Credico threatened to contradict his testimony, Stone branded him a ‘c**sucker’, a ‘rat’ and urged the rattled comic to do a ‘Frank Pentangeli’, referencing a character in Godfather Part II who lies to a congressional committee to help the Corleone family before committing suicide.

He also took aim at Credico’s therapy dog Bianca, a 13-year-old Coton de Tulear, writing in an text message: ‘I’m going to take that dog away from you.’

Prosecutors recommended earlier that Stone serve seven to nine years behind bars, citing his threats to harm someone and his interference with the administration of justice as aggravating factors.

Barr later cast aside their request however, saying the proposed punishment was ‘excessive and unwarranted’ and leaving it up to the court to decide Stone’s jail sentence.

Credico was among those who argued against incarceration, saying in a January letter to Judge Jackson: ‘I never in any way felt that Stone himself posed a direct physical threat to me or to my dog.’

Tomeka Hart, a former Memphis City Schools Board President, stoked the flames further when she outed herself last Wednesday as the jury forewoman in a Facebook post voicing support for the overruled prosecutors.

‘I have kept my silence for months. Initially, it was for my safety. Then, I decided to remain silent out of fear of politicizing the matter,’ Hart wrote.

‘But I can’t keep quiet any longer. I want to stand up for Aaron Zelinsky, Adam Jed, Michael Marando, and Jonathan Kravis – the prosecutors on the Roger Stone trial.

‘It pains me to see the DOJ now interfere with the hard work of the prosecutors. They acted with the utmost intelligence, integrity, and respect for our system of justice.

‘For that, I wanted to speak up for them and ask you to join me in thanking them for their service.’

A review of Hart’s social media posts showed that she had frequently denounced Trump, including calling the President and his supporters racists.

Furthermore, Hart had unsuccessfully ran for Congress as a Democrat in 2012 and participated in anti-Trump rallies and protests.

She had also re-tweeted a post by pundit Bakari Sellers dismissing Stone’s claims that the FBI used excessive force when they arrested him at his Fort Lauderdale, Florida home in January 2019.

Sellers had listed black victims of ‘police force’, including Sandra Bland, Walter Scott and Eric Gardner, scoffing: ‘But Roger Stone!!! Think about that.’

After serving on the Stone jury and finding him guilty, Hart took to social media again to gleefully post emojis of hearts and fist pumps.

The longtime GOP operative’s lawyers have already made one failed attempt to secure a re-trial, arguing in an unrelated motion that a different juror was biased.

They argued the juror, an IRS employee who worked with the Justice Department on criminal tax cases and admitted reading news articles about Stone’s arrest, should have been struck from the panel.

The juror denied having any opinions about Stone when asked about it by Judge Jackson during proceedings.

She ruled last week that there were approximately 1,400 lawyers at the IRS and that the defense had failed to demonstrate the ‘sort of inherent bias’ that would exclude one of their rank from being impartial.