Football legend Rodney Marsh says that alcohol should not be served during football games as fans are ‘nutcases.’

Beloved fan favourite Marsh also branded supporters ‘lunatics’, insisting they should stay seated for games and as sober as possible.

In a chilling comment he asserted that a ‘tragedy’ would take place should the booze be allowed to flow freely over ninety minute games. 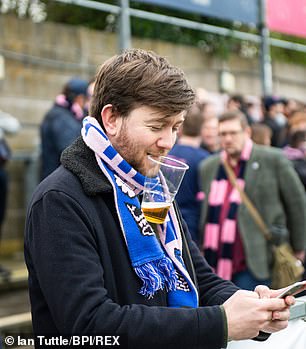 The former Manchester City talisman boasted that he had never attended a game ‘sober’, always enjoying wine and champagne.

His controversial comments come in the wake of footballers across all leagues expressing their delight at the return of crowds to stadia following COVID lockouts.

MP Tracey Crouch is pushing for a pilot scheme to allow drinking alcohol in football stadium seats during the full course of professional matches.

The famous pundit insisted that unlike other sports fans, citing rugby audiences including Prince Harry, the crowd ‘is not the same people. Prince Harry goes to rugby.’

He continued: ‘You take six thousand people in an area with no seating just bumping up against each other drinking while they are standing; you will have enormous problems and you will have a tragedy, I am telling you that.’

Marsh then sparred verbally with co-host Tom Rennie over the proposals, insisting it was ‘not safe’ for spectators standing and boozing.

‘No it is not (safe). Next thing the beer gets spilt onto somebody and oh dear oh dear.’

The 78-year-old feels that nearly all of England’s grounds have rowdy and problematic fans causing problems, regardless of booze. 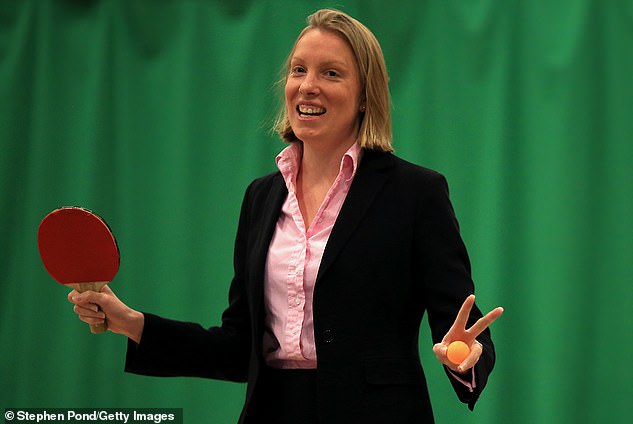 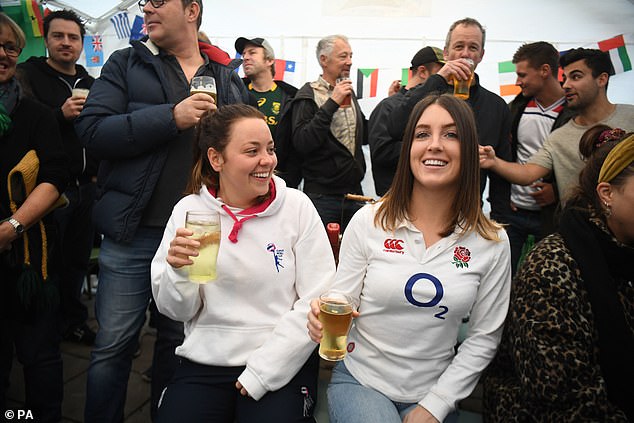 Marsh said: ‘In the last 30 years the only ground I have been to live, and I’ve been to most grounds, where there is no trouble is Fulham – not pushing, shoving, screaming or shouting or getting naughty.’

Marsh debated with his co-host Rennie about the merits and pitfalls of fans standing on the Grumpy Pundits show on Sirius XM FC satellite radio. Marsh is famous for making controversial comments during his media career having even once been sacked by Sky Sports.

WHY WAS MARSH SACKED BY SKY SPORTS?

In January 2005 Sky Sports sacked Marsh for making a tasteless joke about the Asia tsunami disaster on a phone-in show.

The station fired their long term screen star after ‘offensive and inexcusable’ remarks on You’re On Sky Sports.

Marsh’s comment involved a pun on the word tsunami in which he said David Beckham had turned down a £10m contract to sign for Newcastle because he could not possibly go there after what the Toon Army did to Thailand.

‘I apologise unreservedly for any offence I caused by my thoughtless and inappropriate comment I made,’ Marsh responded. ‘My intention was to make a light-hearted football joke.’

Rennie hopes the legislation will become law: ‘There are negatives. We can only move society as fast as our slowest members.’

Marsh sarcastically hit back at Rennie, who admitted he enjoyed drinking beer in his seat at sports events, personally: ‘Because you cannot drink alcohol you are not happy. There you go! What a sports fan you are!’

He asked why fans have no patience to enjoy games without a pint in their hand.

‘Why can’t you sit for 20 minutes and get a drink. Why do you have to drink sitting down or standing up the whole game.’

Marsh did later give some ground saying he could see an argument for enforced sitting and drinking throughout the game, ‘like you do in the pictures’.

He then told Rennie: ‘If it was voted in I want you to come on here on the first Friday where there is a riot, and you say “I am sorry Rod. I got that wrong, because there was this massive riot at Millwall.”‘

Renie hit back: ‘I am not going to do that.’

Marsh says that boozed fans mixing with family groups would be a disaster.

‘What about the man and wife and young son, who go to the game, who don’t drink and are religious, who are standing next to Charlie Farnsbarn and Fred his mate, who are drinking these great big pints of lager and falling around?’

He is unhappy that those groups would have to simply ‘know what is coming to them.’

Mocking the premise, he then joked: ‘If you have the drunken alcoholics only section then I would agree with that.’

Rennie fired back at Marsh insisting not all drinkers become rowdy trouble makers at games.

The ex-Sky Sports pundit laughed: ‘I have got to say I don’t think I have ever been to a football match sober.

‘I always have a drink going to football, a nice glass of wine or champagne and smoked salmon and lobster before the game and enjoy the game… I know several people who go to football with flasks of brandy, and take shots throughout the game.’

‘Some might say in France where they actually run onto the field and fight each other, that drinking beer in the stands might be a problem.’ 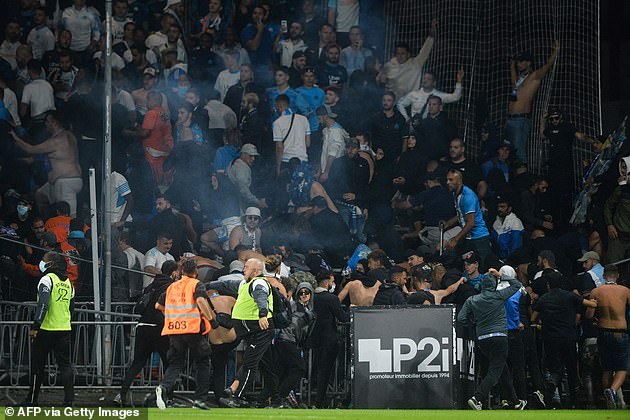 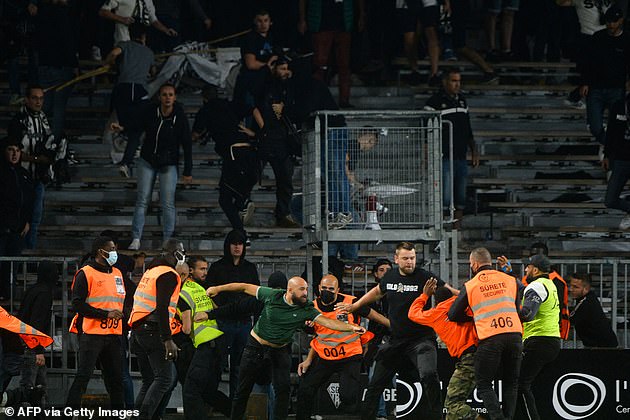 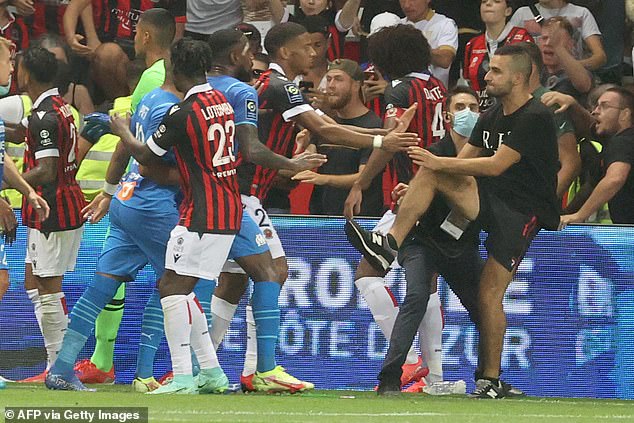 Rennie said that was ‘an isolated example’, but Marsh brushed him aside: ‘Oh yeah yeah.’

He added: ‘They did it three weeks before when one of the guys punched out one of the fans. He did punch a drunken fan because they ended up coming on the field.’

MP Crouch is to push for a pilot scheme to allow drinking alcohol in football stadium seats during matches.

The Chatham and Aylesford MP is set to publish her independent fan-led review into the game, with potential changes to alcohol rules among the key suggestions.

Drinking in stadiums has been banned since 1985, and fans are only allowed to consume alcohol in the concourses of Football League grounds – a rule which often means more pints are sunk quickly before games or during half time.

Crouch acknowledged the violent scenes witnessed at Wembley during the Euro 2020 final were unhelpful in the context of the review, but said a progressive revision of the match-going experience was still needed to help support clubs.

Marsh reflected on the axing of standing fans by the Margaret Thatcher government after a raft of crowd issues in the 1980s.

Marsh admitted they had no choice amid hooliganism and drunken fans.

‘It goes back to the 1985 Heysel tragedy and after the game it was horrific. Not only Liverpool but the entire league of England was banned from European football for five years. And they upheld the ban and the appeal. And they said at the time that was part of the reason.’

On the 2021 reforms, he reflected: ‘Why would you do that when everything is working reasonably well?’

This week Crouch told KentOnline: ‘At the moment there’s a universal ban on the sale of alcohol during football matches in the National League and above. 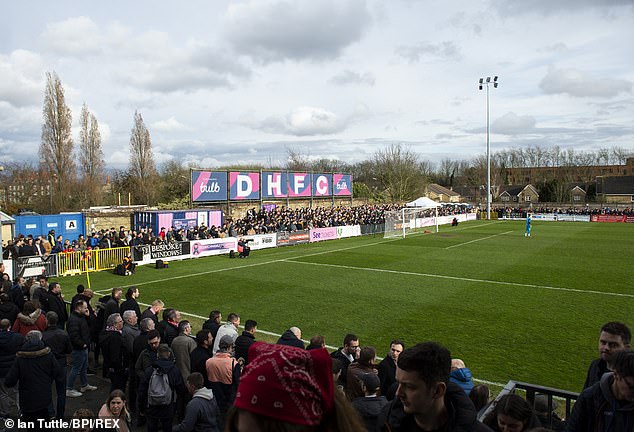 ‘You can’t take a pint back to your seat. ‘Clubs like Maidstone and Dulwich Hamlet in National League South would explain to you they financially can’t get promoted, because if they do they have to close their bar.

‘Clubs can’t afford to be successful so you have this weird situation where Maidstone wants to do well and win the league, but by doing so they financially damage their sustainability.’

As part of the re​view Tracey visited Dulwich Hamlet FC yesterday, where she met Peter Crouch and The Duke of Cambridge, who is also backing support for grassroots football.

She suggested football needed to take responsibility and sustain itself better – and that the scheme could help protect clubs lower down the ‘football pyramid.’ Teams like Chelsea, Manchester United and West Ham have installed safe standing areas provisionally before the potential pilot.