Think twice before hiring a robot! Bots in the workplace contribute to burnout, fears about job insecurity and incivility among colleagues, study warns

From robot recruiters to AI-enabled chefs, androids are now being used in a range of applications across different industries.

But a new study has warned against robots in the workplace, amid fears the bots can contribute to burnout, fears about job insecurity, and incivility among colleagues.

This is even the case in industries where robots aren’t being used, according to researchers from the National University of Singapore.

Dr Kai Chi Yam, who led the study, said: ‘Some economists theorize that robots are more likely to take over blue-collar jobs faster than white-collar jobs.

‘However, it doesn’t look like robots are taking over that many jobs yet, at least not in the United States, so a lot of these fears are rather subjective.’

A new study has warned against robots in the workplace, amid fears the bots can contribute to burnout, fears about job insecurity and incivility among colleagues

Jobs most at risk of being taken by robots

In the study, the team conducted experiments and analysed data from participants in the US, Singapore, India, and Taiwan.

In one experiment, 118 engineers employed by an Indian auto manufacturing company reported greater burnout and workplace incivility when working with industrial robots.

However, in another experiment involving 400 participants, it was found that self-affirmation exercises helped to lessen workplace robot fears.

Participants were asked to write about their uniquely human characteristics, such as sense of humour, friends, and family.

Another experiment involved 343 parents of university students, who were randomly assigned to three groups.

Participants were then asked about their concerns for job security, with results revealing the first group reported significantly higher levels of job insecurity than the two other groups. 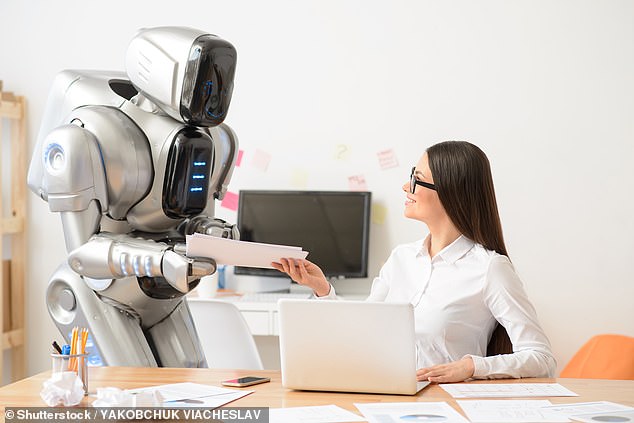 In an experiment involving 400 participants, it was found that self-affirmation exercises helped to lessen workplace robot fears (stock image)

Jobs least at risk of being taken by robots

As part of the study, the researchers also analysed data about the prevalence of robots in 185 US metropolitan areas.

They compared this data to the overall use of popular job recruiting sites in those areas, such as LinkedIn and Indeed.

The researchers suggest that people in these areas may feel more job insecurity because of robots, although they say that other reasons could be at play.

The study comes shortly after researchers from the Ecole Polytechnique Fédérale de Lausanne revealed which jobs are most and least likely to be taken by robots.

Their findings suggest that meat packers, cleaners and builders face the highest risk of being replaced by machines, while teachers, lawyers and physicists are safe.

‘The key challenge for society today is how to become resilient against automation,’ explained Professor Rafael Lalive, who co-led the study.

‘Our work provides detailed career advice for workers who face high risks of automation, which allows them to take on more secure jobs while re-using many of the skills acquired on the old job.’